Editorial: Copyright In the Origami World

I retired from the army three years ago, and one of my first decisions was to go study law, not in order to practice it, but to understand copyright law with its implications to the origami field in particular. I am not a lawyer though, and what is written here is based on a paper I wrote while attending a copyright seminar during my studies. It is my own opinion and should not be taken as official OrigamiUSA policy.

Different states have varying legal systems and practice different laws. In Israel we have no constitution, for example. I will try to walk on the common ground here, mostly referring to US law, British law, Israeli law (which is based on the British system), and some international conventions.

There is no subject that raises more discussions and controversial opinions in our field of origami than copyright. Every now and then the O-list is swarmed by emails on this subject. In a series of articles, I will try to establish arguments step by step, hoping to arrive at a common understanding about what is allowed and what is wrong with respect to origami and copyright.

Many questions arise when one thinks about copyright in origami. First, is an origami creation covered by copyright law? Is it a form of intellectual property, and if so, how can I protect my rights? Should it be patented? What about diagrams? Or a crease patterns? Can I teach someone else’s model? And does it matter if I bought the book? There are many more questions of this sort. I will seek to address only one such question in this article.

The Basics of Copyright

In Israeli law, there exists copyright for any “artistic creation”. In US law (circular 92/~102):

Copyright protection subsists, in accordance with this title, in original works of authorship fixed in any tangible medium of expression …

Works of authorship include the following categories: …(5) pictorial, graphic, and sculptural works; …

And in the definition section:

So our first question to ask and answer is: Is Origami art?

To analyze this question, we will use three tests:

A statue, according to the Merriam-Webster online dictionary, is:

A three-dimensional representation usually of a person, animal, or mythical being that is produced by sculpturing, modeling, or casting. [source]

This seems to be an old fashioned definition, which leaves out many geometric and modern creations.

Wikipedia may be more relevant:

Sculpture is three-dimensional artwork created by shaping or combining hard materials—typically stone such as marble—or metal, glass, or wood. Softer ("plastic") materials can also be used, such as clay, textiles, plastics, polymers and softer metals. The term has been extended to works including sound, text and light. [source]

To become a sculpture origami must be three dimensional and created from a material (nowadays it seems not to matter what the material is). But the catch here is the word artwork. Origami is certainly a 3D creation, but is it a work of art? To declare that an origami work is sculpture, we must confirm that it is art first, since not every 3D object (such as a common bench) is art.

There is no escape from moving to the next test - is it art?

Going back to the Merriam-Webster online dictionary:

Art: (4 a) : the conscious use of skill and creative imagination especially in the production of aesthetic objects. [source]

Art is the product or process of deliberately arranging items (often with symbolic significance) in a way that influences and affects one or more of the senses, emotions, and intellect. It encompasses a diverse range of human activities, creations, and modes of expression, including music, literature, film, photography, sculpture, and paintings. [source]

Those are very wide definitions. Aesthetic is the essence of many origami works, and almost certainly, an origamist arranges the paper in a way that influences the senses and emotions of every viewer. Look at this image, and see how your senses and emotions, as well as your intellect, react - appreciation, wonder, and joy is what I feel, for example. 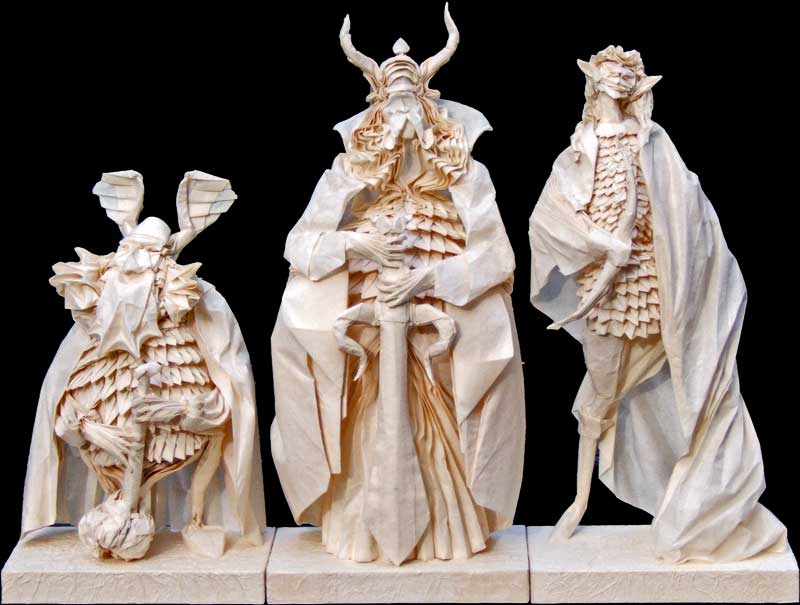 Furthermore, there is nothing more straightforward then the definition of Origami in both dictionaries:

The conclusion of this test is firm - Origami is an art form, but to complete the argument, let’s see if those who sell art think so, too.

Our third test is problematic, since no one gallery can be considered as a ruling one, nor can the acceptance of origami in one be considered representative of the art world as a whole. Nevertheless, there are many examples of origami models presented in museums and galleries as art. To name one, "Flight of Folds" by Robert J. Lang and Kevin Box is presented in the Selby fleetwood Gallery in New Mexico (Image 2). Although it is made from stainless still, it could still be considered an origami work. 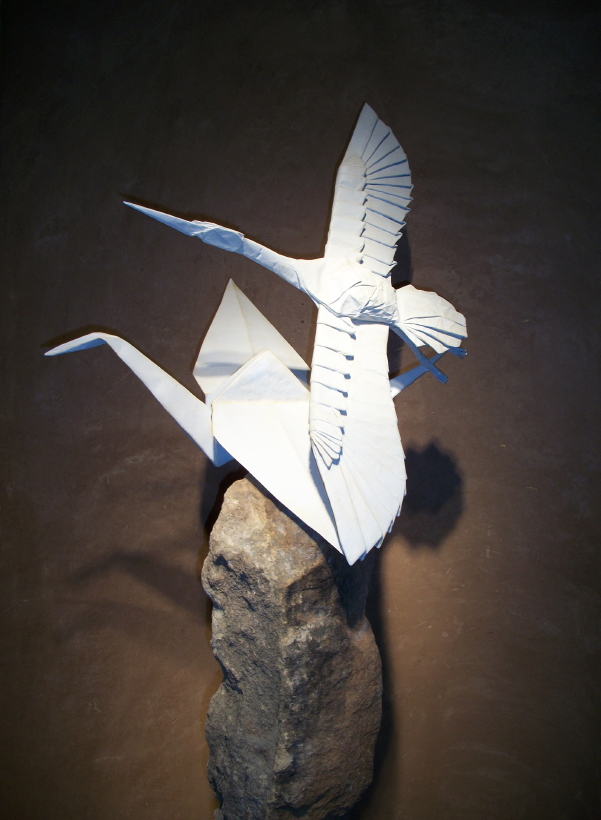 Additionally, there have been a number of exhibitions of works from famous origami artists hosted by prominent museums throughout the world. In 1998, the Caroussel du Louvre in Paris, France hosted an exhibition called "Paris Origami". In 2003, the Mingei International Museum in San Diego, CA hosted a show called "Origami Masterworks". In 2005, the Hanger-7 gallery in Salzburg, Austria ran a "Masters of Origami" exhibit. In 2007, the Peabody Essex Museum's origami exhibition in Salem, MA was called "Origami Now!", while a show at the Tikotin Museum of Japanese Art in Haifa, Israel was entitled "Treasures of Origami Art". The Museum of Modern Art in New York, NY hosts origami in their permanent collection. These galleries and many others all seem to have accepted modern origami as a truely artistic medium.

To be considered art, US law asks for only two tests - it must be original, and it must be fixed in a tangible medium of expression. Origami models pass this test easily. An interesting court verdict, which deals with plastic flowers, helps identify the boundaries of copyright law coverage:

In Prestige Floral, Societe Anonyme v California Artificial Flower Co. (1962, SD NY) 201 F Supp 287, 132 USPQ 350, the court adopted the principal that, to be copyrightable, a work of art must be a product of original creative authorship, the principle that a copyright does not protect the subject, but only the treatment of a subject, and the view that courts had overcome their hesitation to hold, expressly or impliedly, that a three-dimensional object was a copyrightable "writing". In granting a preliminary injunction in favor of the manufacturer of an artificial flower, the court said that although a flower was a creation of nature, its likeness could be copyrighted as work of art, particularly when the creation of the likeness involved numerous and detailed decisions as to proportion, form, contour, configuration, and conformation. Since the flower manufacturer's lilac reflected originality and a substantial degree of skill and independent judgment, the court concluded, it was a proper subject of copyright.

Although the subject of this ruling was plastic and not paper, there is no relevance in the material this 3D “writing” is made of. What a wonderful way to describe origami: as a 3D “writing” in paper!

To conclude, there is very little doubt in my mind that an original origami model is a work of art according to the definition in copyright law. Either as a statue, or defined in any other way, origami seems to be covered by copyright law. But what kind of protection do we get? That, and many other questions will be studied in future articles.

The issue isn't whether origami is art, the question is whether it is an art like sculpture rather than an art like fashion design (or cooking) and thus what rights one has and does not have when it comes to derivative and reverse-engineered work. I don't think there is any dispute that a folded piece of origami created by someone is itself a work of art. But that is only speaking to that particular original piece.

The issue is: does that mean the creator owns the diagrams that would allow one to fold that creation and that this has the effective force of preventing anyone else from figuring those diagrams out and sharing them? And does this extend to copies made by others? Recipes are protected by copyright, cooked dishes are not. Clothing designs are protected, but the product is not. Is origami more like sculpture or more like furniture? There are reasonable arguments for both.

There is precedent in both directions, as one can see from the fields mentioned earlier. The question as to whether origami is art does little or nothing to settle the question as to which would apply in the real world as tested by a real court case. Obviously copyright applies, as it does to every other artistic creation including those which legal precedent does (and doesn't) protect from "copying" in particular ways.

December 6, 2011 - 12:19pm garibiilan
Since I do use the example of recipes in my future articles, I will briefly say that recipes are not protected at all by copyright law, and it does raise a major problem with origami, as I will further show. See here.
December 20, 2011 - 8:30pm mark.dewolf-ott

In regards to origami being a sculpture - - -I thought that origami is two dimensional. Even though the plane may be "folded" it only has length and width? Is this true? Maybe one of the engineers out there could explain.

In our world there is no true 2D object. If it is made from a material, it is always 3D. Yes, the third dimension is thin, but it is there.

First you must understand that in order for a law to be effective, it must be enforced. You can have millions of laws protecting/preventing anything, but without anyone enforcing the laws, the laws are basically theory.
Until there are court cases for origami copyright, the question of copyright will be just that "a question of copyright." Even if a court case is in favor of a copyright case, another or higher court may overturn that case. Also court cases can be expensive routes to pursue. With court cases you may have to prove monetary loss, intention of theft, etc. And did you action within a reasonable/legal time frame in order to file a court case?
Also another problem is that some countries do not protect copyrighted materiel.
This problem has plagued the music/movie industry for a long, long time. In recent cases the music industry won some court cases with huge monetary fines. The music industry told the defendants that they could wave or pay almost nothing, if they would admit to actually violating the copyright. Then the music industry has president for future cases.
If the same happens with origami, you may see the same outcome.
There are other aspects that come to mind such as is the origami design original and can you prove it to be an original origami design. How many changes to an origami design will constitute a new origami design? Since origami is valley and mountain folds, does any design constitute a new origami design? Such as, you made changes to a crane design, but can your design be truly called original?
All in all we should respect each others work and hope others do the same.