The Complete Blintz Part 2: History of the Blintz

The all-corner fold, the blintz, is integral to origami: It is old, one of the first folds you learn; and new, an essential part of the origami techniques that took flight in the 20th century.

We will learn about the early history, the quest for pure origami and Gershon Legman, and the later history of the fold.

Countless children learn blintzing as one of their first folds in preschool when they meet the fortune teller. The technique of blintzing the paper is as old as it is widespread. An old Japanese woodblock print from the “Ranma Zushiki”1 (above), depicts a number of origami models.

Kunihiko Kasahara2 has analysed the print and concluded that the Yakko (E, a servant of a samurai) and the Ashitsuki-Sanpo (F, Japanese offering box with legs) are two of the models depicted, and those both have blintzes. The folding of the Yakko starts with no less than three blintzes from alternating sides, see the Yakko diagram in part 1 of this series.

The next time the blintz occurs is in “Kayaragusa” (aka “Kan no Mado”) from 1845 as a crease pattern for a wrapper for dried chestnuts (above). The diagram is incomplete, but if you make a blintzed preliminary base, outside reverse fold two of the blintzed flaps, and fold the bottom corner behind, you will get something similar to the drawing. I am, however, not aware of how it is supposed to be used as a wrapper.

Editor’s note: For more on the “Kan no Mado,” please see an article from issue 13 of The Fold reprising an email by David Lister.

Michio Uchiyama organized origami into two broad systems of bases, the A system based mostly on radial creases and the B system based mostly on rectilinear creases,4 or rather, everything else. The system was maintained by his son Kochio, and the two theorists had quite an influence, particular in the Japanese origami community.

In the Uchiyama system, the blintz occurs as base number B10.5 The base is classified in the B-system because they used the medians (rectilinear) as landmarks. I wonder if it would have been in the A-system had they used the diagonals as landmarks.

Many of the models in Kayaragusa are rather complex, but typically, flaps are obtained by slitting the paper or cutting it into star shapes. This continued until fairly late in the 20th century. Origami master Isao Honda6 would use irregular shapes or cuts as required but introduced compound figures to satisfy the need for more flaps:

“If you fold the front half of the body then the rear half, then join the two together, it is easy to make a number of animal folds including cats, dogs, elephants, rhinoceroses, etc.

“Though this method was not originally in common use, after we published our “Origami-shuko,” in 1940, in which we included a number of compound animal figures, this type of fold became very popular.”7

Even Honda’s pupil, the great master Akira Yoshizawa, used cuts and compound figures for all his complex models (examples above) for a long while. Yoshizawa also introduced the idea of gluing to attach two squares at overlapping corners, which essentially amounts to cutting the square into an irregular shape.9

However, Yoshizawa was not satisfied with those borderline techniques:

“Limit of origami: Beauty of origami exists in what is created from refraction of various surfaces and lines produced on a sheet of paper.

“Compound origami ... each separate piece should have its own individuality or personality. ... I don’t call any Origami a compound Origami, if it can only gain its individuality after being pasted or put together. It should be called a mosaic or paper craft.”10

That is, a new understanding of what origami is emerges. The old origami (from before it is called origami) is seen as impure. Later on, Yoshizawa finds (non-blintz) techniques to make his now-famous models, such as the giraffe, with all the flaps from one square,11 and he becomes the father of modern origami.

The quest for the Holy Grail of origami — to fold anything from a single, uncut square, no matter how many flaps are needed — continued, leading to the bug wars of the 1990s, and ultimately resulting in box pleating, circle packing, Treemaker and mathematical models that proved the goal is theoretically possible. 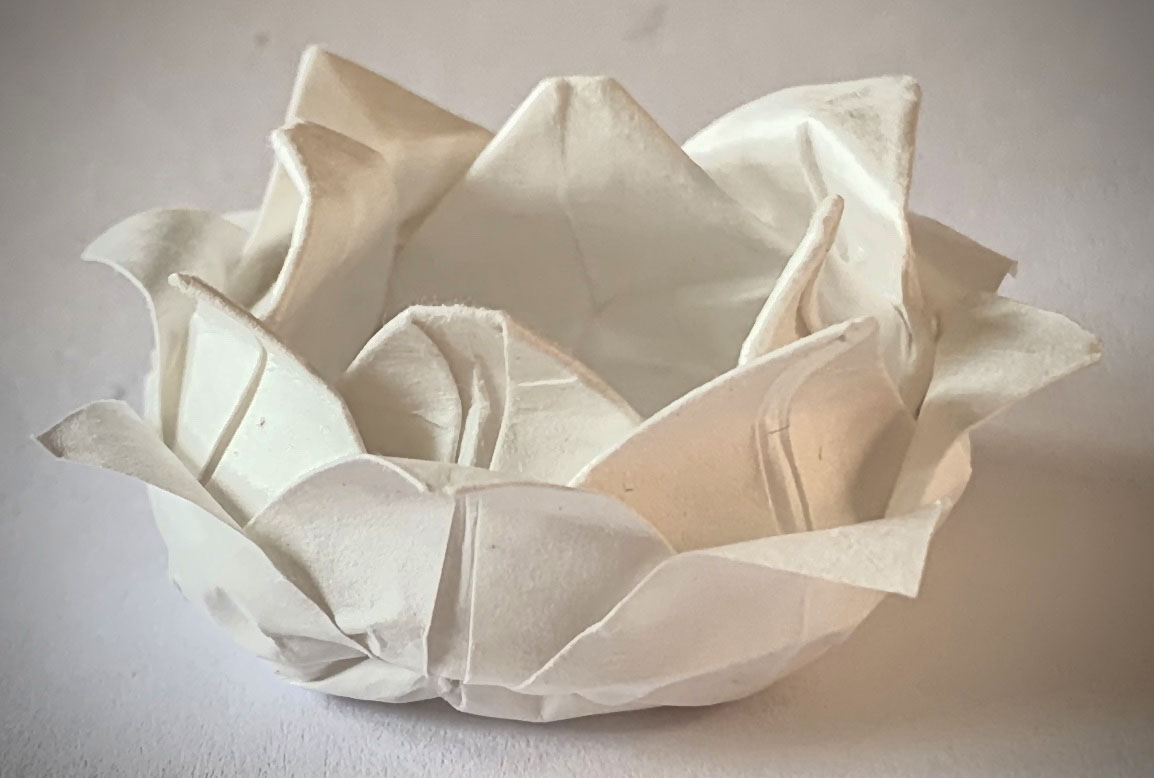 The Sanpo and the Yakko of “Ranma Zushiki” are rather simple, the Yakko even crude and inefficient. Only the lotus flower (above) really utilizes the possibilities of the blintz: three or more blintzes to the same side, then invert the leaves to the other side, one by one.

However, we shall see how the blintz history writes itself into the quest for complex models from one uncut sheet.

In the early 1950s, Gershon Legman investigated folding all four corners to the center before folding an origami base, at which point the hidden-away corners could be retrieved again to form extra flaps, a standard technique in origami.

“An idea I had long cherished: namely, that one might construct all the usual bases — bird, frog, and fish — on the classic square paper, of which the four corners had first been “blintzed” to the center before constructing these bases. I felt, and I still feel, that this method of creating extra corners for use in the end-figure details makes unnecessary the excessive cutting into the paper seen in the “Kan-no-Mado” (Kayaragusa) and in the vulgar “koko” style foldings of Uchiyama senior. It even to a degree makes unnecessary the achieving of the same extra corners by the method of pasting together two square sheets at one overlapping corner, in the style made famous by Mr. Yoshizawa in all of his books, beginning with the figures he contributed to Mr. Isao Honda’s book “Origami Shuko” in 1944.”12

Legman goes on to write:

“The modern development of the blintz fold appears to be of Western origin. In Paris in 1953 and 1954, I showed the essentials of origami technique to the American origami artist, Mr. George Rhoads. ... I ... gave him [the idea to blintz the usual bases to make unnecessary the excessive cutting].”13 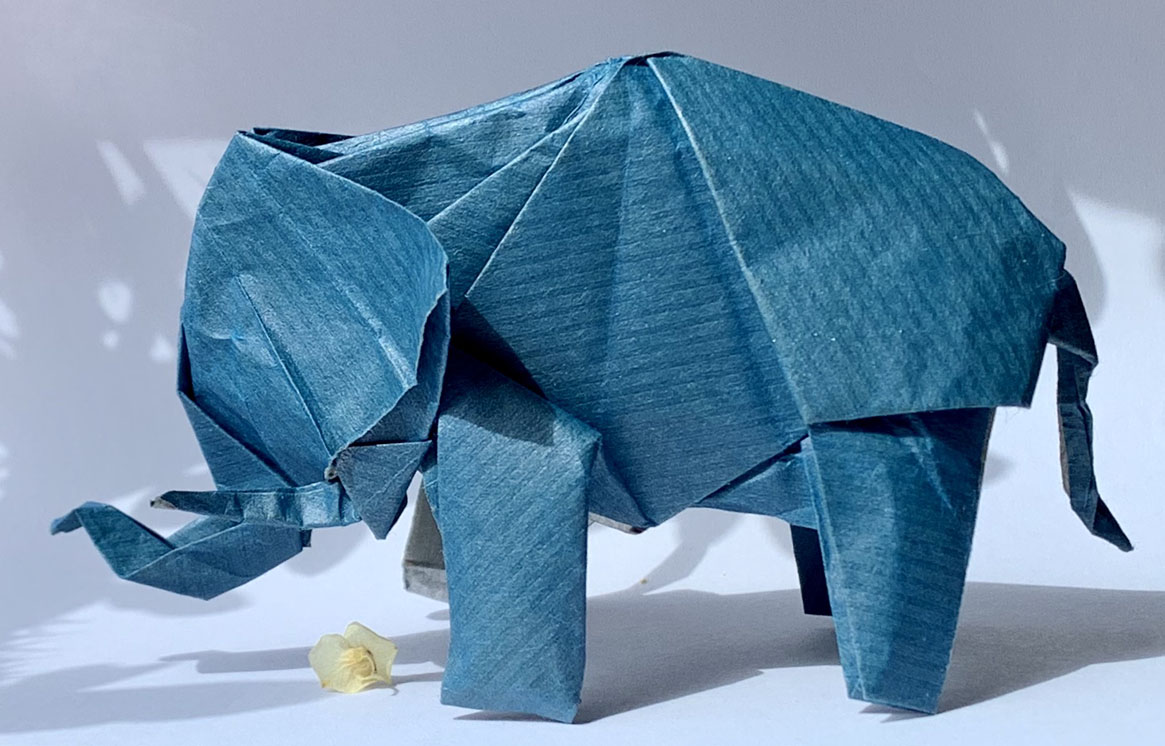 Elephant, designed by George Rhodes. Folded by Hans Dybkjær. Note: According to Legman, Rhoads changed his name to Rhodes.

And indeed, Rhodes later designed the now-famous elephant with four legs, trunk, tail, two tusks and two ears (above). This elephant is folded from the blintzed bird base. Diagrams are in Samuel Randlett’s “The Best of Origami.”14

That is one of the earliest examples of achieving naturalistic origami animals through the use of many flaps.

As early as the 1950s, farsighted origami designers made forays into these more complex bases. Yoshizawa, using a multiple-blintzed base, produced his remarkable Crab with 12 appendages, while the sculptor George Rhoads exploited the blintzed bird base for several distinctive animals, including his Elephant. But these were the exceptions.15

The blintzed bases are still used. The figure above shows a more geometric model designed a few years ago by Frederik Lenk. The thick green lines in the crease pattern indicate the blintz.

This is a fascinating and well researched/documented read. Many of the more knowledgeable articles about the technical underpinnings of modern origami are so technical themselves that they are lost on average readers or enthusiasts. This piece is just technical enough (e.g., with references to subjects such as "circle packing" without dwelling on their finer points) that it allows readers to make these connections without getting bogged down. Its historical perspective provides terrific insights (I especially liked the reference to George Rhode's elephant model in Samuel Randlett's classic book, "The Art of Origami.") The article is a real keeper.

Hi John, I'm happy that you like it. Of course, I already try to make a revised version ... another reader, Ted, found a solution for the chestnut wrapper, and I would like to add a note on Fröbel. Oh, well, you can fiddle articles ad infinitum. Btw. Jane Rosmariin does a terrific job of editing what I write. Regards, Hans

Thank you for the wonderful article. Can you double check the diagram source of the elephant? It is not in my copy of "The Art of Origami." It could be in "The Best of Origami."