Located at the University of Tokyo, The sixth conference for Origami, Science, Math and Education (OSME) presented a vast number of talks, each of 20 minutes, on a tremendously wide scope of interest. What had started as OST, for Origami, Science and Technology, in 1989, is now a mix of mathematics, science, education, art, architecture, design and technology. What other venue can bring Peter Engel and Gregory Epps to speak about Origami and the Language of Design and Industrial Robotic Origami, respectively, before a group of origami enthusiasts? In the following paragraphs, I present my experience from this conference and the talks I have heard.

I have been folding quite a lot of materials lately, as this is my main area of interest. That is why I was tremendously happy to sit and listen to two consecutive talks about folding concrete. Finding this was a surprise, since there is very little hint of anything about that in their titles. One was named “Self-organized Folding with Gravity and Friction as Guiding Concept”, by Georg Grasser, Günther H. Filz and Rupert Maleczek; the other was “Oricreate: Modeling Framework for Design and Manufacturing of Folded Plate Structures” by Rostislav Chudoba, Jan van der Woerd and Josef Hegger. You need more than a little imagination to realize from these titles that these men fold sheets of no less than real concrete. Yes, ciphering the true value of a lecture was the source for many moments of joy during the conference, as well as for some frustrations, unless you read all the abstracts, of course.

So, truly, how can one fold concrete? Can you wear a tessellated metal piece of art? Does the future of origami lie in small cuts that allow not-to-be-done-before collapsible models?

The best place for lunch, small talk, and meeting the right people (image by Patsy Wang-Iverson.) 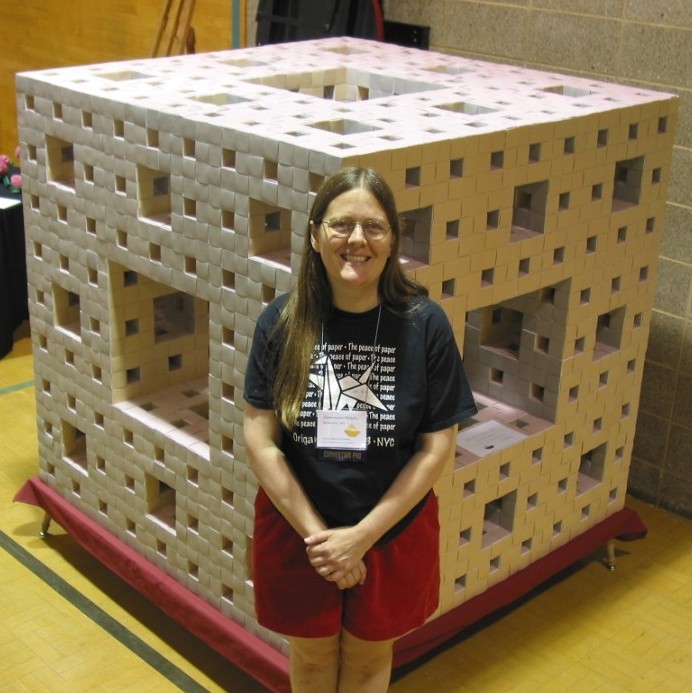 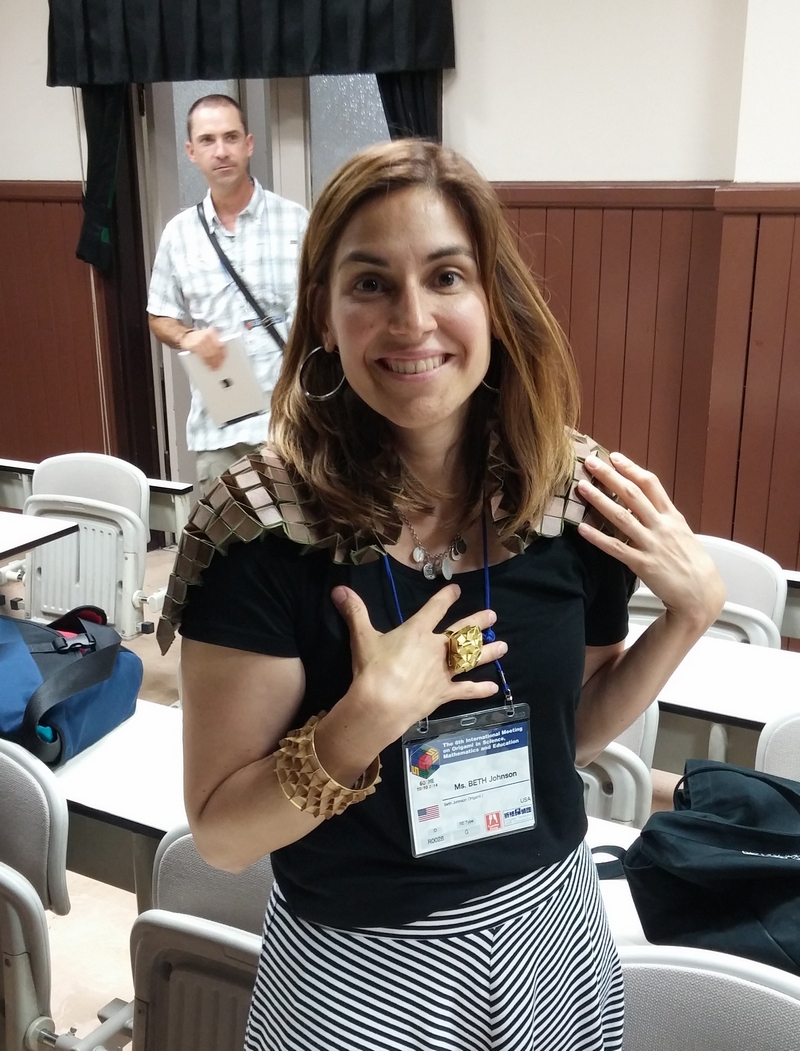 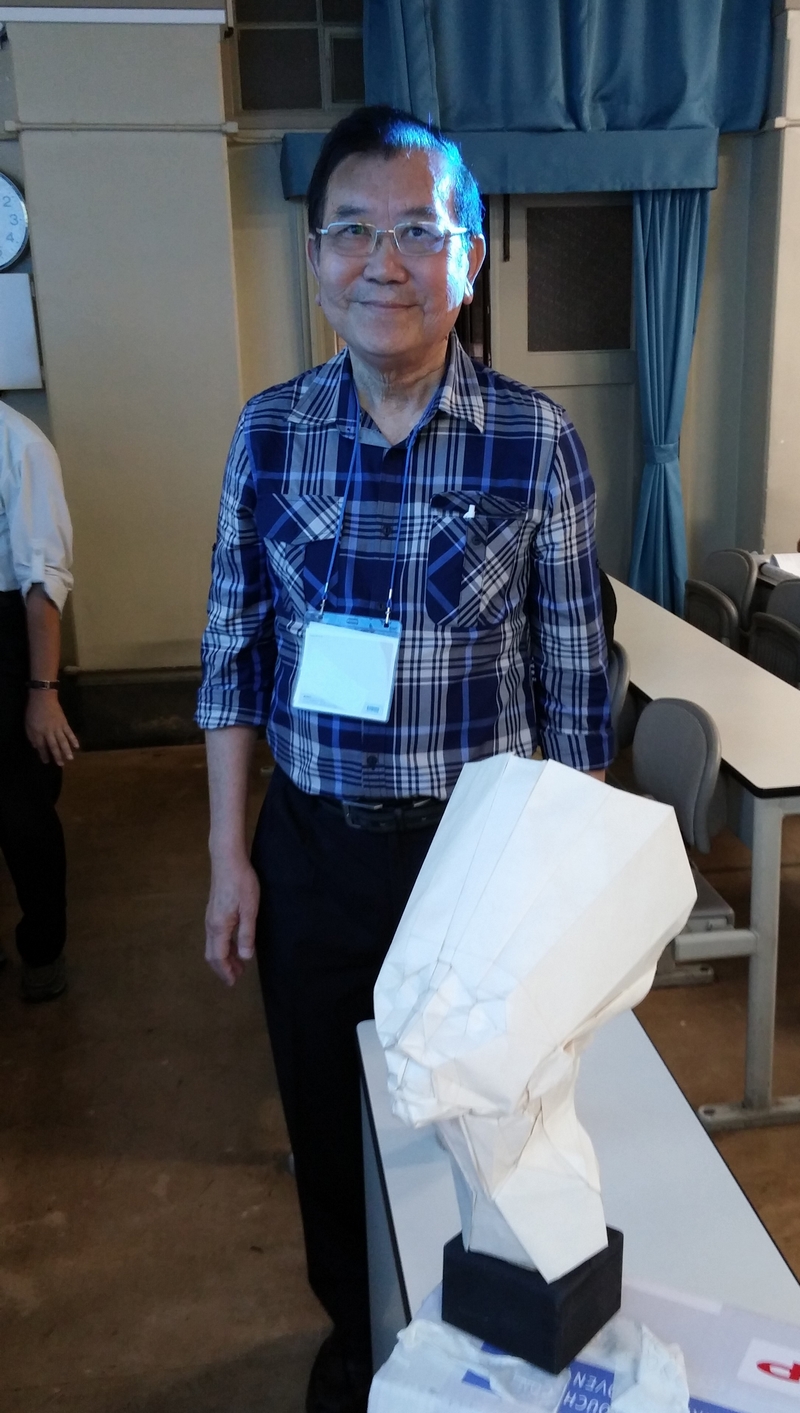 The talks were divided into subjects, such as Art, Software, Pop up, Infinity, Composite Structure, Curve Foldings, Design, Education and more. Each session was led by a session chair. Having this system, most of us stayed through the four talks in each session, although there was enough time to switch rooms during a session. The list of topics was long, and with four talks at any given moment, I usually found a continuous line of interesting talks. I still had some slots for which I couldn't find any really interesting ones and just stayed in the room to see what would come next. During some of these, I found hidden treasures. Dr. Jeannine Mosely's talk is a great example for that; her talk was titled "Crowdsourcing Origami Sculptures", which made me think it is about Kickstarter and the like. It turned out to be a brilliant and interesting talk about the Menger Sponge, and her exploration and projects she executed with it. My best moment there was her idea of breaking the 3rd level sponge into smaller parts, which is a brilliant move and can be changed into a wood puzzle. I was excited also to hear she came up with a Mosely Sponge, a unique invention of a sharp mind.

Out of laziness, I chose the Bento option in my registration. A bento is a boxed lunch, prepared daily with a variety of tastes and beautiful look. Having my lunch in the main hall allowed me to chat with anyone I wanted to. I won't be name dropping here, but truly this was the best part of the conference. I got new paper puzzles (for a book I am trying to write) from Martin Demaine; the mutual appreciation of Kevin Box, a sculptor, who enjoyed my work as much as I felt for his (and his highly talented wife, Jennifer); to wear the masterpiece of Tine de Ruysser, wearable metal origami, on my shoulders. Origami can truly bridge between people from all over the world. I met people from countries I cannot visit, and we discussed nothing but Origami, leaving politics to the politicians.

The talks I had on my list were not on the main road for OSME, as I was highly interested in art and design. Many others, scientists, mathematicians and engineers were all hovering around, all trying to see how origami can improve their designs, ideas or practical problems. For anyone who looks into origami deeper than the paper surface, this conference presents all possible roads to explore and discuss. The essence of origami is based on sharing, as I see it, and I had many proofs for that. People shared their ideas, techniques, proud in the result of their research, and were open to answer question or give more details in the times between talks.

Seeing this title: “Cosmological Origami: Folding up the Dark-Matter Sheet into the Cosmic Web” in the schedule, one can wonder what he can fold out of a dark matter sheet (the Nazgul, by Jason Ku, of course), there were many talks about Origami with paper, as simple as that. One was Design of Origami Polyhedral Surface by Straight-crease Couplets, by Cheng Chit Leong, which I found highly interesting, and with practical implications.

On a more philosophical note, I found the subject Goran Konjevod chose for his talk - Origami Beyond Geometry - more than intriguing. When I finished my talk about using anything but paper to fold and design, Kevin Box asked me “what is next?”. A terrifying question, for which I may find an answer in Goran`s talk. And indeed, he had so many good advice, like “Fold a sheet of paper so that it can be freely sculpted into desired forms... “ “Do not fold slowly and accurately.” “Work at a different scale, so that paper doesn't behave like paper anymore. ”

For me, this is it: four days that expand your imagination and creativeness to all directions. Please sign me up for 7OSME, wherever it may be.

Could someone maybe write an article about couplets? And maybe make it accessible to all users of the site?...

Can someone explain couplets in an all-accessible article?