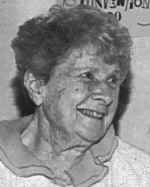 Origami was relatively unknown in the United States until a woman named Lillian Oppenheimer discovered the flapping bird. That introduction, at a family gathering in the late 40's, triggered the fascination that would dominate the rest of her long life. Lillian wanted the world to share her love of origami. She sought to find or teach more folders in the New York area, and she also started corresponding with paperfolders around the world.

Gradually, through the 50's and 60's, Lillian became more and more involved with origami, and gathered around her a small group of equally dedicated and talented people. They saw magic in the creation of beautiful objects from a simple sheet of paper, and they wanted to spread their love throughout the United States.

By the 1970's Lillian was no longer young - she was born in 1898. Her colleagues wanted to make certain that the collection she had accumulated, and the business she had started to ensure rare origami books and papers would be accessible, would live on. Among those people was Michael Shall, a young teacher from Pennsylvania. He had an ambitious dream of a new group, with hundreds, or even thousands, of members all over the world, all dedicated to sharing Lillian's original vision. With Alice Gray, Gay Gross, Natalie Epstein, Alan Kaplan, Robert Neale, Florence Temko, Gwen Williams, and other people, he founded The Friends of The Origami Center of America. In 1980 The Friends was incorporated as an all-volunteer, not-for-profit, tax-exempt, cultural and educational arts organization. We are registered as a 501(c)3 charitable corporation. In 1987, we officially purchased Lillian's supplies business, which we run as mail-order only. By the time Lillian died, in 1992, The Friends had achieved and even exceeded Michael's dream.

Effective July 1, 1994, The Friends of The Origami Center of America became OrigamiUSA. The same year we took a giant step toward tomorrow by hiring a full-time Administrator, which has made it possible for us to maintain regular office hours, and have a consistent presence to respond to our members' requests.

See unique video footage of Lillian Oppenheimer, the founder of organized origami in America, as she reminisces about her life, her art, and her connections to origami greats from around the world.

Were you around in the early days of origami? Do you have an oral history you’d like to share? Please send it to the website team at website [at] origamiusa.org, and meanwhile, enjoy what some of our long-term members recall in the sections below!

British Origami Society member David Lister has become justly famous for his wide-ranging and scrupulously researched essays on the history of origami and various related topics. While most of his essays were initially posted on the Origami-L mailing list, the British Origami Society has collected many of them on their own website. Click here for a list by topic of these marvelous works.

While origami is an ancient art, its modern incarnation is surprisingly recent, and many of us have had the great fortune to meet and/or work with the pioneers of the art and of OrigamiUSA. Memorials of some the greats of the art may be found here.