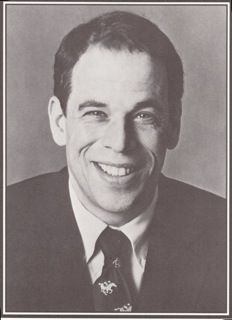 Michael Shall was a Co-Founder of OrigamiUSA (formerly The Friends of The Origami Center of America). It is through his efforts as a volunteer that we have grown from a handful of origami enthusiasts to a major force in the origami worldwide community.

Michael Shall worked closely with Lillian Oppenheimer and Alice Gray to bring Origami USA to life. He was born in Pennsylvania into a family of folders. He came to New York in 1977 and origami has never been the same. His energy and enthusiasm pioneered creative approaches to expand the public's awareness of and access to origami. He spent many years as a full-time professional paper folder. Founding The Friends of The Origami Center of America, his mission was to make the world "safe for paper folders." He was the quintessential volunteer. His teaching and communication skills brought origami to thousands of people. We miss him and thank him.

Michael is much like the subway trains of his New York City home-of-choice. When he's running, he bustles with overflowing rush-hour vitality.

Busy paperfolding hands were ever a part of his growing- up. When his peers got paper delivery routes to earn their first "real" money, Michael's route was to deliver paper as well: helping to supply bulk orders of Cerceda's Peacock folded from crisp USA one dollar bills – the only in his class with green printer's- inky fingers.

He eventually escaped the slow pace and limited horizons of his early small-town years in Carlisle, Pennsylvania. In recent years he's enjoyed returning regularly to give of his time, sharing origami. After several successful but frustrating years as a public school teacher, Michael moved to NYC, and worked in the theatre as well as dozens of other short term odd jobs. He continued his folding, and volunteered countless hours with Lillian Oppenheimer and The Origami Center of America.

If Michael has not arrived in NYC when he did, paperfolding would have created him. Michael is profoundly committed to making the world safe for (and especially with) origami. His pioneering effort and creative approaches to expand the public's awareness of, and access to origami; his great love and respect for Lillian and Alice; his masterful skills and showmanship as a generous teacher have aided him in becoming the USA's only full-time professional paperfolder.

The riveting success, year after year of his various "Origami for the Holidays" projects; his tireless work as the first Director of "The Friends"; the ever growing attendance and enthusiasm of the conventions and other gatherings; the ear-to-ear grins in countless children's wards; judge a person by their deeds, this man love his precious life's work.

Michael Shall - Vision and Dedication 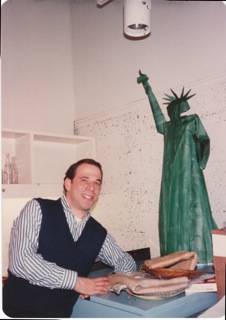 Michael Shall was born into origami and grew up in the philosophy of Lillian Oppenheimer, to whom origami is for everyone-the ideal device for sharing the job of accomplishment. His driving energy and flair for showmanship have indeed made him a most effective spokesman for paperfolding and our only successful professional. But there is another aspect of Michael, in my eyes the most important. Michael is a man of faith, vision and dedication. He truly believes that origami can con¬tribute to the happiness of everyone who embraces it. He regards his work as a form of social service and gives to libraries and hospitals more hours than he sells to schools and private pupils. Not himself a creative folder or even an easy learner, he knows what folders need to feed their enthusiasm and what an origami organization ought to be to kindle and sustain in people as diverse and widely distributed as the population of the world that sense of achievement without which any enthusiasm wanes. Moreover, he is willing, as a volunteer, to work himself almost interminably and is able to persuade others to work also to make his vision a reality.

The Friends of The Origami Center of America (now Origami USA) would have developed under other leadership; but its present form, its status as a tax-exempt cultural and education insti¬tution and its free and admirable accom¬modations in the American Museum of Natural History were all envisioned and attained by Michael Shall. Now that The Friends is well established under a board of directors, Michael's vision of origami has broadened. He sees the organization running itself, the duties he has hitherto discharged apportioned among other volunteers. Then he will at last be free to pursue his career and his mission-to make origami a familiar word, a universal recreation, an accepted art form and a tool of wide utility in therapy and education.

Since Michael is a professional folder one may see as self-service his devotion to his art. He has striven for ten years against formidable odds to make a liv¬ing by the thing he would most wish to do if he did not have to eat. At length, he is winning public recognition as an artist and a teacher. He has earned it.

I Won't Grow Up

The following are excerpts from a speech made by Remak Ramsay on the occasion of Michael's 40th birthday (1989). He called the speech "A Few Rhetorical Questions?"

Who walks down the street as though he is being pursued by the Furies?

And who rubbernecks in all directions as though someone just said, "There goes Jackie O and Mel Gibson?" Who, if Jackie and Mel did go by, would shout, "Hi Jackie! Hi Mel!"?

And in the improbably event that they stopped to chat, who would very shortly begin to pull little squares of colored paper out of his pockets?

Who is equally at ease with octogenarians like Lillian and the his three-year old neighbor Tillie?

Who takes presents wherever he goes?

Who do you think will be the first Jewish boy to do Christmas decorations for the Vatican?

Who loves ice cream and popcorn and chocolate and spice drops and Gummy Bears almost as much as folding?

Who is always going to clean up his desk? Who is not about to start to take a breath between sentences?

Who, when he is happy, will never be too mature to shout "Hooray, Hooray!"?

And who, despite the fact that he is forty today, is not about to relinquish his favorite motto: "I won't grow up."?

I have supported Origami USA since its inception and was fortunate to experience teaching by Michael, Lillian and Alice. But, Micheal Shall changed my life.

I am just retiring as a Suzuki Piano teacher in Minnesota. Perhaps that's why my reminiscing is going full circle! I would love to share my "Michael" story and perhaps have a bit of it addended to Michael's Memorial page. If not, its not a problem but I thought I would try.

When my husband and I married, we chose to live in a suburb of NYC called "New Jersey". Since we were both New Yorkers we were frequently in the city. On this occasion, I needed some minor surgery, my husband was in Australia and I had two sick youngsters at home. My surgeon was in NYC and all of the procedures were done using a local anaesthetic so I could get myself home, by train, in the evening. The doctors office was near Japan Air Lines and while walking by, and feeling sorry for myself, I saw this small imp of a man decorating a Christmas tree using folded models. He saw me, insisted I come in, and gave me a gift of a packet of instructions and paper to fold some models. I folded all the way home, with decent results. Folding was very therapuetic and helped me through a difficult time. Subsequently, I sought out Michael and attended events where he was teaching. My skills and that of my children, continued to grow. A few years later, at one of Michael's folding fests in New Jersey, my three year old daughter folded a butterfly so beautifully that she was featured on the front page of the Ridgewood news.

During this time, I was also completing a degree for elementary education. In those days, mentoring was non existent! But, I found my own mentor--it was Michael Shall. I eventually became a Suzuki piano teacher, but I patterned my teaching style on what I learned from Michael. I loved his clarity, humor, preciseness and over the top characterizations and for me, it was a great fit. Perhaps the connection was enhanced because I was teaching using a method begun by another charismatic teacher, Shinichi Suzuki.

To this day I remember the Jewish guy from the Midwest who took an ancient Japanese artifact and decorated an American Christmas tree. In my mind, that was the symbolization of the "peace of paper."