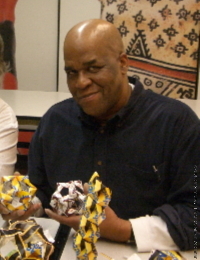 Vernon Isaac (1948-2009) was a fixture at OrigamiUSA conventions, ever friendly, ever willing to teach, with a big, booming personality and a warm, infectious laugh. (Photo by Wendy Zeichner.)

The news of the death of Vernon Isaac saddened many of us who knew him and finding a way to honor him was a sad task for the awards committee. We decided to honor him with the Ranana G. Benjamin teaching award, given to someone who has done outstanding work in the teaching of origami.

Jennifer Gerring (TX) wrote: “Vernon was always the first person I would look for at the convention because his smile and bear hugs were so welcoming. He taught me one of his metrocard modulars. Being my first time to create a modular, locking it together was a difficult task. he gently took my hands and placed all the pieces in them and helped me lock the last piece in.”

“He was a remarkable (and remarkably outgoing) person, and he made conventions more fun for a lot of people,” wrote Michael Naughton (MA).

And from Naomi S. Radodlitz (NY): “I am heartbroken. I was one of those first-timers at the convention and at N.Y.C. Folding Sundays that Vernon befriended. His pure joy in both origami and life was always infectious. I could never talk to Vernon without ending up with a grin on my face.”

And from Tom Hull (MA), “I, for one, continue to use a teaching tip that I learned from him: Whenever I teach a model and we complete a step that has to be done on the other side of the paper or on the other half of the paper (like a cupboard fold), then Vernon would say, “And you know that last move we did? We liked it so much, that we’ll do it again!” I love that line, and I think of Vernon whenever I use it.”

Vernon will be remembered by those in the origami community, and those he taught with humor, patience, and a twinkle in his eye.

By Paul Parris (NY)
I met Vernon on his very first Convention (the year escapes me). He was sitting on the ledge outside folding. Vivian Lowery (NY) and I were on our way to lunch. I said to Vivian, “There’s a brother, have you seen him before?” We both agreed that he must be new.
I went over and said to him, “Hey, my brother, you look lost and lonely.” Being Vernon he said something witty, then asked me if I had a cure for lost and lonely. I invited him to join us for lunch, and the rest is history.
We exchanged numbers and spoke regularly during the year until the following convention. Of course, it did not take long before Vernon knew everyone and everyone knew him. Vernon was warm, friendly, and had a great sense of humor. He was also very generous with his time and his models. I have several given as gifts, my favorite being a mini Sunny (rose) made with six $2 bills, I am a NY Mets fan; a cube made from Metro cards with the team’s logo along with the rose was a birthday gift. Vernon was known as Mr. Metro Card. He created and folded the internationally known “Jake the Snake,”whose length was 50 feet, all done with NYC Metro Cards. Each segment used six Metro Cards. Jake the Snake is an awesome model.
As the years passed, we continued our friendship and I would greet him with, “Hey, my brother,” and he would holler back with, “Hey, my sister,” followed by a big hug. I will truly miss his voice on the phone with, “Happy Friday! My sister.” I remember a member hearing this greeting and remarking, “I did not know he was your brother.” Vernon and I both laughed, and I told him to explain it. Vernon walked away with the member giving me a wink.
When his daughter Yolanda went away to college, we talked about the expense, how quickly the years were passing, and his many visits to her at school. When she graduated, he was so proud of her and all her accomplishments.
I, like everyone, was shocked and saddened to hear of his passing. He kept his illness private, which was another side of Vernon. The last time I saw and spoke with Vernon, he was the Vernon I knew, and maybe that is how he wanted to be remembered. .
I pray that he was surrounded during this final days by the love and comfort of this family. I read this in a book and would like to leave you with this parting phrase: Remember Vernon with smiles and laughter, because this is how he remembered you. If you can only remember him with tears, then do not remember him at all.
Rest in peace, brother, you will be missed and remembered by your Origami Family.

I met Vernon at the Origami USA convention back in June of 2001. He was pleasure to meet, he was
teaching the modular NYC metro pass unit. He was very kind to me, before I left he gave me a stack
of metro passes to take with me back to Chicago. Every time I teach that model I think of him. I was
sorry to hear about his passing, he died too soon! I just wished that I could have kept in touch with him. Thanks for this tribute. -Robert C. Smith (CHAOS - Chicago Area Origami Society)