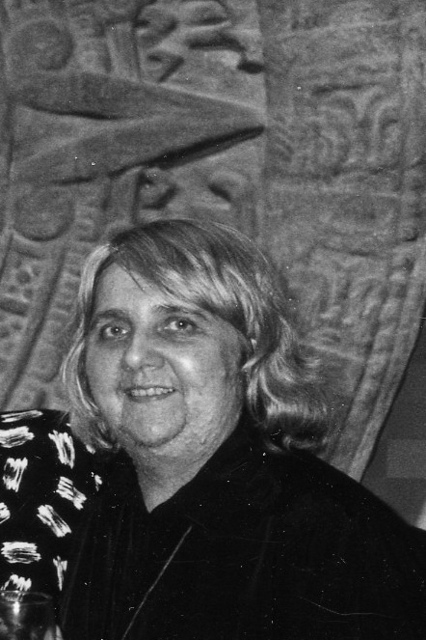 Vyda G. Liaugaudas passed away on February 27, 2010. She was a long-time member of OrigamiUSA. Vyda was member # 1322 and she supported our organization and helped in many areas. She was a member of the Publications Team back in pre-computer days when everything was done by hand--drawing, inking, cutting, and pasting.

Vyda also assisted teachers at classes at Conventions and Special Sessions. Those of you who remember those days will have a good idea of just how far back Vyda went as a volunteer.

Back in 1997, Vyda was the co-administrator when our first paid administrator left. She went on to join the Library Committee and helped us when we were working on computerizing the books in our Reference Library. That involved a lot of hands-on labeling and book-checking.

One of Vyda’s strengths was in responding to members‘ special requests. Members would call and ask for photos of the annual Origami Holiday Tree, and Vyda would take photos and mail them. During Convention, and sometimes after, Vyda would get specific requests from “Where is there a reasonable place to eat?” to “What’s the best way to get to the Empire State building?” She had the city memorized. She could tell you several ways to get almost anywhere, and without needing a map.

We shall miss Vyda. She was a friend to OrigamiUSA.

I was enlisted by Vyda to volunteer and help out with small things at first. I used to work on collating paper for the survival kits for Convention. I’m not a paperfolder, well, not yet. Vyda used to meet me at Folding Sundays at the Museum. Then I joined OrigamiUSA. I’ve always supported the arts. I’ve just gifted my young nephew with a junior membership. It was Vyda who introduced origami to him. Now I’m planning on attending convention 2010 and I’ll be thinking about Vyda while I’m there.

Vyda left us a lot of origami paper and books knowing that we teach. Now we can continue to “spread the joy of folding” using her paper. She had recently moved to Penn South and we will be teaching origami at the Penn South Senior Center using paper in her memory.

Vyda was a great friend. she always remembered birthdays, and sent interesting clippings instead of e-mail. She was a real New Yorker--she could recommend a restaurant in any part of town and then tell you the quickest route to get there.

I miss Vyda’s folding passion, her integrity, and most of all, her friendly company.

A very special lady: a true and loyal friend, devoted to sharing her love of origami and to years of volunteering for OrigamiUSA. She has left us too soon!

I was working at her job and one day she asked if I would help with the Origami Convention. I have helped, now, for at least 4 years and counting. She always thought about others before herself.
I hope she will be an inspiration for all those she touched.