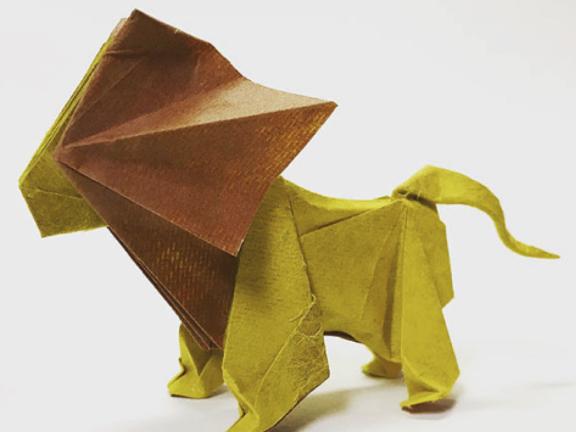 Join a new origami rising star designer, Rob Snyder, and learn to fold his Lion model. Rob is an American origami artist who started designing his own models in 2015. His original origami designs have been published in OrigamiUSA's The Paper and The Fold, the British Origami Society (BOS) magazine, and the OrigamiUSA annual Origami Collection. He has also contributed designs to a number of Nick Robinson's books. Rob creates models in the representational style, primarily designing animals, and he’s inspired by the natural world, as well as by depictions of animals in the art of children’s literature, cartoons, and tangrams. You can follow his work on Instagram @robsnyderorigami

Paper needed: A square of paper that is a different color on each side (for the color change mane), at least 25 cm (9 ¾ inches). Plain duo kami will work fine, or you can use a fancier paper, like the Deluxe Washi from the Americas Origami Shop.