These are past recipients of OrigamiUSA's Scholarship Program. Know a young, deserving folder? Check out the program and make a nomination! 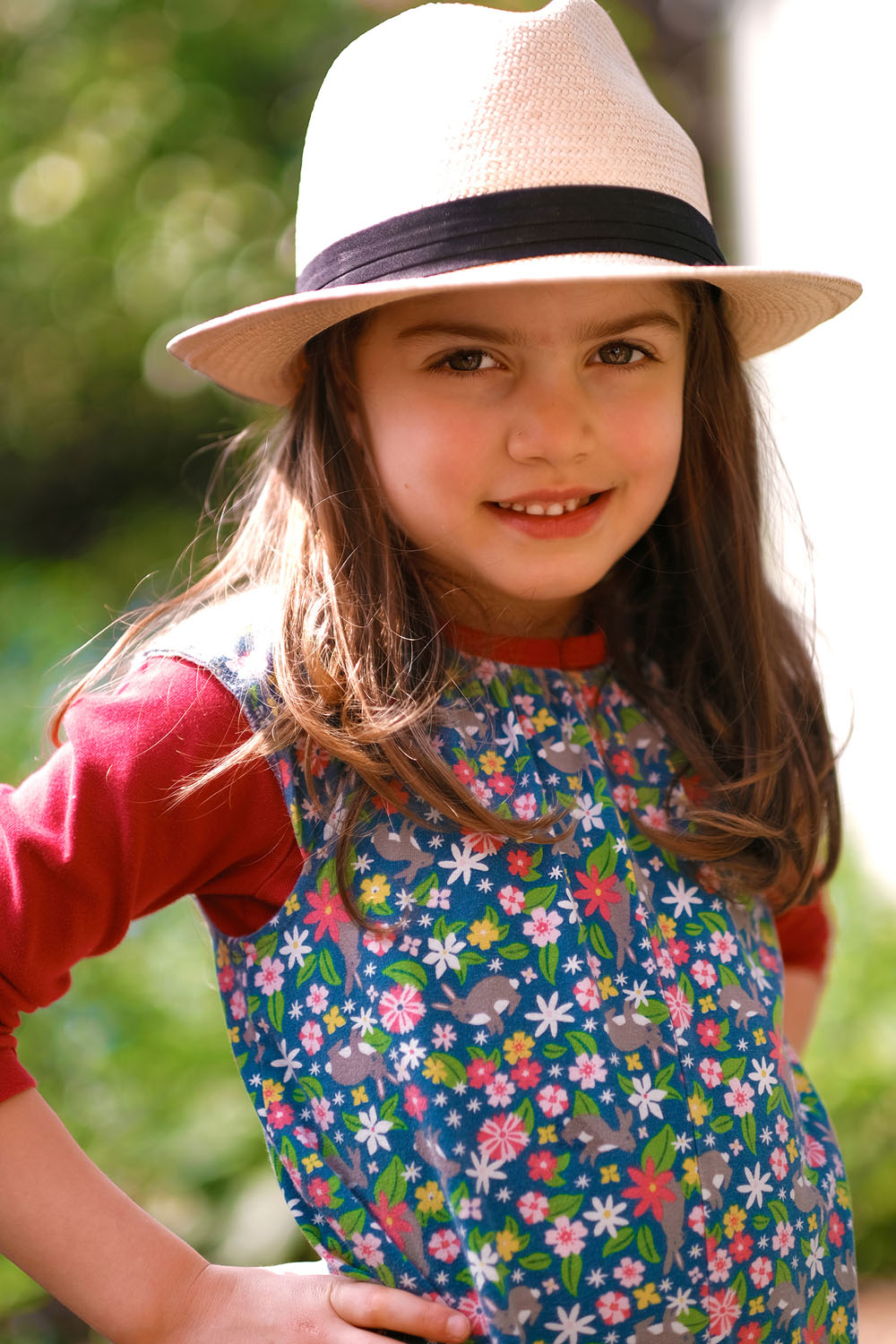 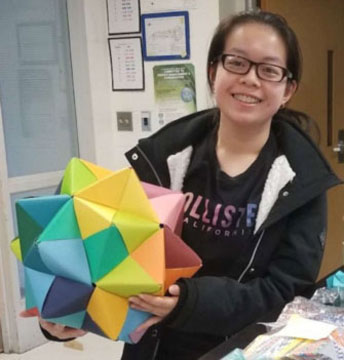 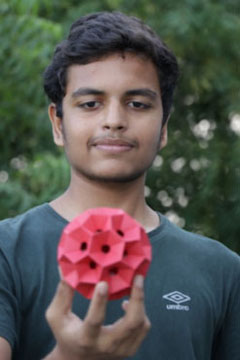 Adèle, 6 years old in 2020, shares her love of origami with everyone she meets. Already she is a special person who can teach anyone from children to adults. She has been doing origami since she was only a little over 2 years old, and has been practicing origami every single day since then. When learning a new model, she spends months practicing to make it as neat and accurate as possible. Her very first model was a tulip and it took her 10 months to learn to fold it. When she was 4, she spent hours practicing making an origami star. Doing origami daily has greatly given back to her, serving to improve spatial-visual skills. Adèle loves animals, live and folded! She likes experimenting with hand-colored papers and using origami in other creative ways such as making origami jewelry, origami postcards, or origami ornaments. Recently Adèle was invited to participate in two Christmas markets where she sold her origami creations and raised money for her school. She taught origami to children every Friday for their after school club and on Zoom to families from around the world during the 2020 lockdown. At one point she and her family were living in a village in Italy. She taught many children in that village how to fold even though she didn’t speak their language.

Jessica, 17 years old in 2020, attributes to origami her awareness of how crucial it is to engage and learn with others. At age 17 she is co-president of the Art Club at her high school. She has many creative outlets, but what separates origami from other art forms is its ability to bring people of all ages and abilities together. With origami, it is necessary to engage with others to learn and improve. Jessica is committed to learning about the state of our planet and to have some impact on global warming, so she was excited to learn about the organization Paper for Water, which is dedicated to building water wells in countries lacking clean water. A major way to thank donors is to send origami models, and for that they encourage people outside of the organization to send in modules to assemble into “thank you origami.” Jessica was excited that she could meld two important interests: origami and the environment. Realizing that she could support Paper for Water by holding a workshop to teach art students how to fold a sonobe unit. She lovingly packaged the modules and shipped them to be opened, assembled, and given as gifts to those who support clean water. Since then she has taught many models to friends and classmates. She especially enjoys Ekaterina Lukusheva’s intricate and beautiful kusudamas. Through these models Jessica become aware of the connection between mathematics and origami/art. Jessica has a long list of science areas that she might want to study --- she always wants to stretch her abilities and challenge herself.

Tej, 15 years old in 2020, was only 7 years old when he was first introduced to origami by his mom. By the time he was 9 years old he was already really “into folding” and origami has continued to play a central role in his life ever since. One of the first models with which he was fascinated was the Magic Ball designed by Yuri Shumakov. It took focus and persistence --- and some help from newly found origami mentors at a Japan Festival near his home --- before he mastered it. From there his origami world expanded quickly. He meets with Origami Mitra (a group of folders in Mumbai and Pune in India), participated in a Guinness Book of World Records event to fold the world’s biggest butterfly (they did it!), and began teaching origami at many different schools and colleges. He says that, “teaching origami gave me a different sort of fulfillment and positive energy, which motivated me to do more and more origami.” He is active in many projects that bring origami to rural and tribal schools in India, and others such as Origami for Peace, whose mission is to promote peace through thousand crane projects and Senbazuru. Recently Tej was nominated to attend an origami architecture workshop, where he had the opportunity to explore origami with many new materials and techniques. He has a broad interest in the many ways origami can come into play --- robotics, fabricating, designing, just to name a few --- and he is always searching for people who can help him or collaborate with him. He likes to explore the mathematical side of origami, and he is planning to do research on rigid foldability. 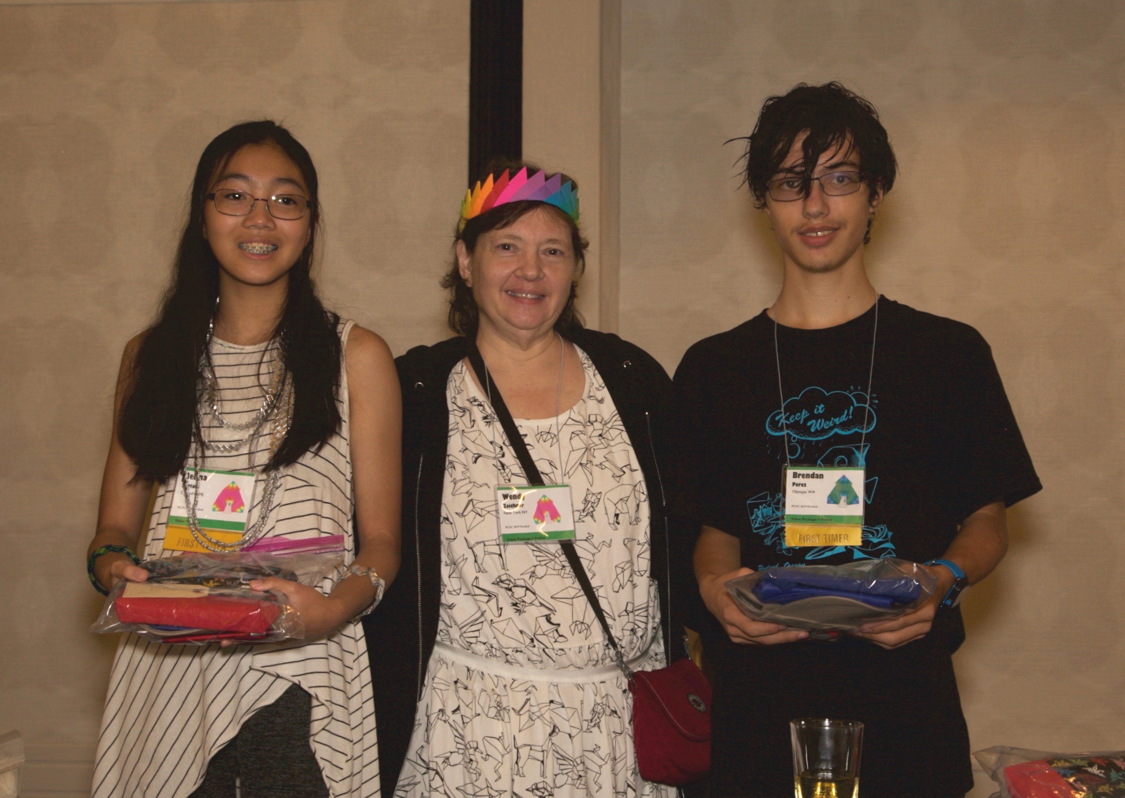 Brendan’s mom borrowed an easy kid origami book from the library when he was 4. After making everything in that book, they went to a used book store where he saw the book "Origami Bugs and Beasts" by Manuel Alvarez. His mom did buy the book for him despite warning him that it was going to be too hard. At first he cried inconsolably because he couldn't fold any of the designs, and it was way too advanced for his parents to help. By the age of 6, he had taught himself how to fold the creatures in that book and has been folding ever since. It is no surprise, then, that Brendan also loves mathematics and puzzles. In the past three years he has designed numerous mechanical wooden puzzles. Origami has greatly influenced his love of mathematics. He can see endless applications of the mathematics of origami and hopes to do research and have a career in this area.

For Melina, one of the best parts of knowing how to make origami is being able to share and teach others. In her afterschool program in elementary school, she was making a lot of origami and would get many requests from classmates to make them something. She loved trading a piece of origami for a compliment or act of kindness. Eventually she couldn't keep up with the demand so she taught a number of her classmates how to make simple hearts and birds. In the summer before 5th grade she made and sold origami birds and hearts to her family and friends, and raised half of the funds for a summer STEM camp she really wanted to attend. In 7th grade, inspired by an online Post-it note project, she made about 150 origami hearts with special positive messages on them and surprised her 7th grade classmates with one on each of their lockers at the end of the school year. Melina has been doing Ninja Warrior training for 4 years. Recently she was on a junior version of the TV show American Ninja Warrior. She was chosen from over 6000 applicants to compete on a ninja warrior course in California in front of a live audience (to be televised). 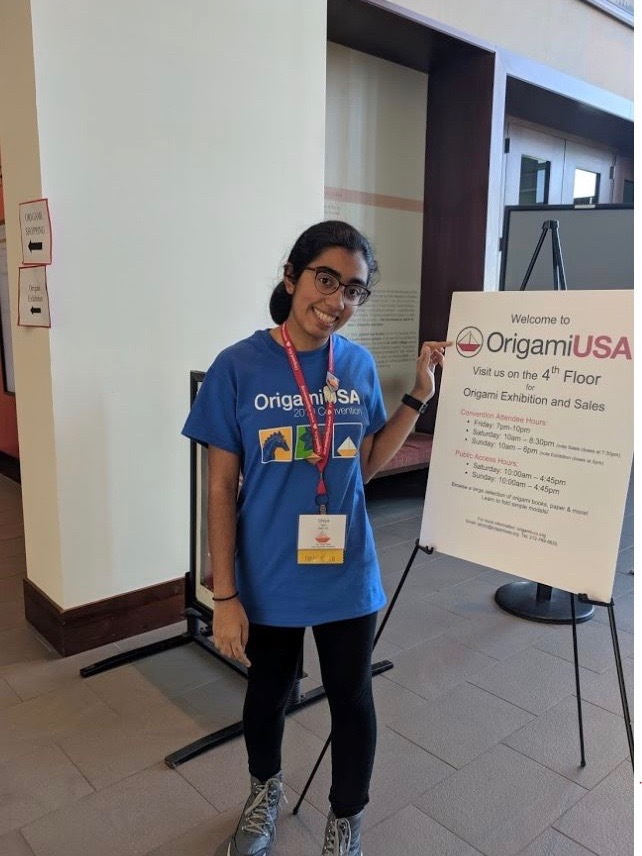 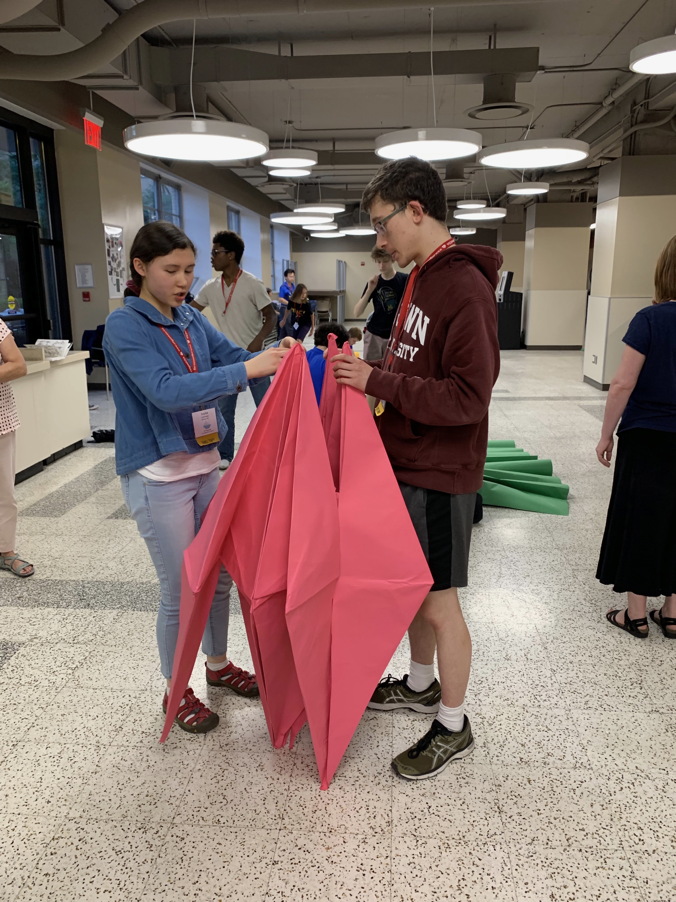 Early in her origami life, a friend gifted Divya a set of origami books by Meenakshi Mukerji, and her passion for modular origami was born. Since then, folding has become an integral part of her day. Ever since she started serious origami folding, she has been giving away models as gifts to friends and family. She has taught modular origami to teens at her local library and has displayed her models there for the past three years as part of the artists’ showcase. She will soon be featured there in an artist meet-and-greet and will spread the word about origami. She also enjoys teaching origami at a Senior Center. Divya is fascinated by the various science applications of Origami and will do a research internship on the applications of self-folding polymer sheets at North Carolina State University this summer.

Origami also brings Sophie wonderful opportunities to meet people of all ages who think similarly, but who come from very different backgrounds. Sophie leads monthly origami workshops at her local library, classes at a senior living facility, and weekly origami club sessions at her high school. In spring, normal classes at her school are suspended for a week during “March Intensive,” and students can focus on one non-academic course taught by a teacher or community member. This year, Sophie’s course plan for origami won the March Intensive Competition. She received funding for her course from her school and from The New Hampshire Association of Science. For the past 2 years Sophie has combined her interests in origami, math, and creativity by working with an engineering research group lead by Professor Zi Chen at the Thayer School of Engineering at Dartmouth College. One focus of his group’s work is origami-inspired engineering. She helps design, test, and analyze various structures that are useful for engineering. She documents her progress on her blog, “The Origami Journals,” which can be found at . 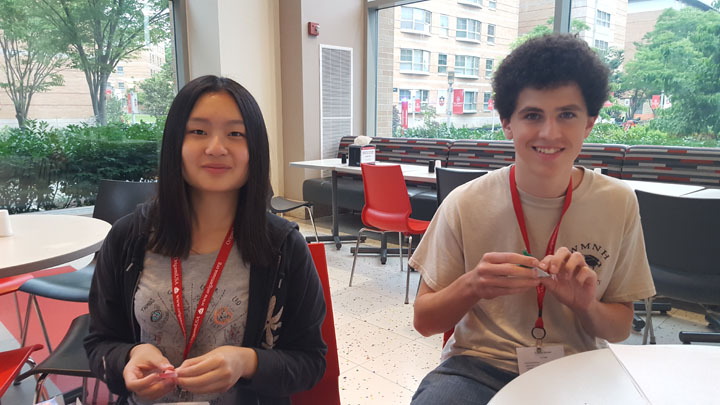 In 2017, Kelly hosted an origami demonstration at Los Altos History Museum on the opening weekend of the exhibition 'I want the Wide American Earth: An Asian Pacific American Story'. She taught groups of children and adults how to fold origami and displayed various models around the museum. Kelly is interested in the interface among origami, math, and science. She is actively pursuing connections in medicine and was invited to attend a program at Johns Hopkins University this summer.

The diagrams for one of Travis’s original models, an oncavenator (dinosaur) were published in the 2017 East Bay Origami Convention book, and an image of the model was printed in Prehistoric Times, a paleontology magazine. He will be displaying several models at the Whiteside Museum of Natural History in Seymour, TX, this June for a prehistoric origami display. He has won numerous prizes for his models, and founded a Community Origami Group, ADROIT (Artists Doing Remarkable Origami in Texas). He is an excellent ambassador of origami with infectious enthusiasm.

Both Kelly and Travis were amazed at how many people share their interest and it fired them up to go home and be ambassadors for origami. 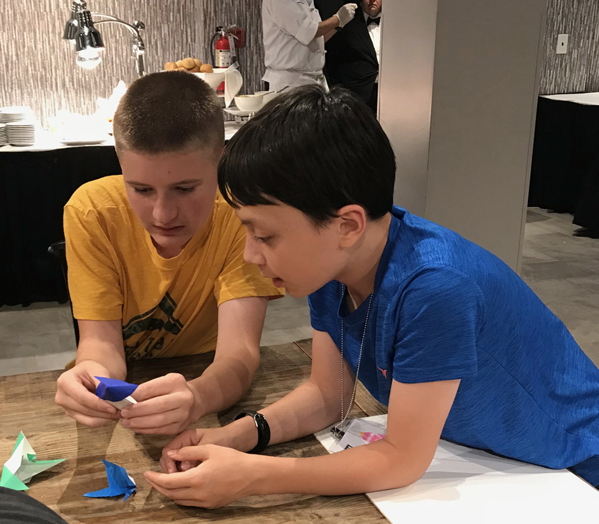 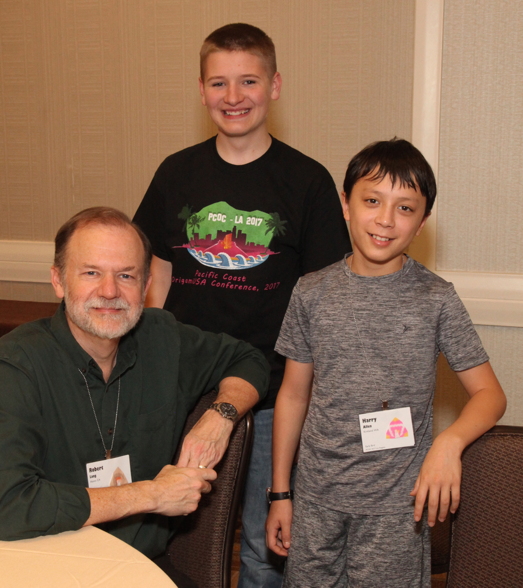 Alex and Harry were prolific folders and creators before coming to PCOC 2017 in Los Angeles. Harry has his own YouTube channel and Alex has a self-published book and runs a popular local convention. They were both extremely excited and appreciative to have the opportunity to go to a convention and meet some of their origami idols, like Robert J. Lang. They attended classes, met new friends and went home even more excited about origami.