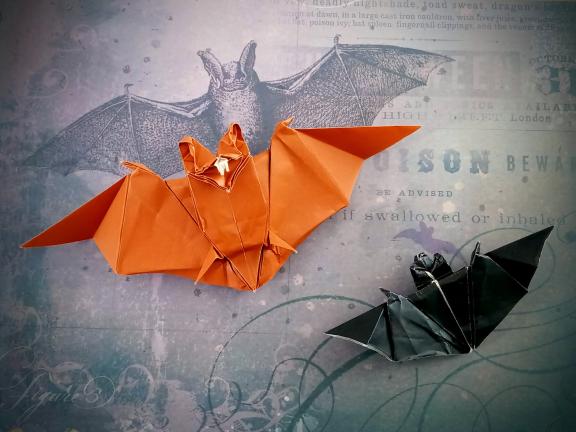 Whether you would like something to celebrate Halloween with, or, like me, believe everyday is Halloween, this bat is just the origami craft for you! I had desired to find & fold an origami bat that possessed realistic details and natural proportions whilst remaining in the intermediate range of complexity, and requiring no wet-folding. Although many great bats already existed, whether simple, complex, or stylized, none had quite the look I imagined, so I resolved to create one that did. The result evolved over several improved iterations, and finalized as the Bell Tower Bat; It is the first in a series of other future upcoming macabre origami-entities, and creased cryptic-creatures collected under the name PHANTASMAGORIGAMIA.
The folding sequence is very pleasing, and works well with squares of 6in to 10in (or larger if desired), albeit some details may be too miniscule at smaller sizes to create (such as fangs). Most difficult folds are several open and closed sinks. The model is diagrammed in about 50 steps, in a booklet just under a dozen pages. Size of finished model wing tip to tip is a little under the width of the starting square paper. The head may be bent up/forward or ventrally for an in-flight pose or bat-portrait pose. I found model may have the potential to glide when made at larger sizes, experimentation to find best paper weight to size ratio could enhance this.

"Bela Lugosi's dead
The bats have left the bell tower
The victims have been bled..."
-Bauhaus