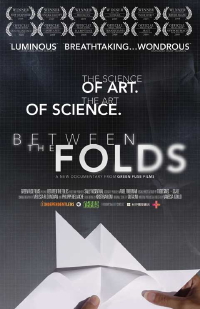 The national US television premiere of the multiple award-winning documentary Between the Folds will take place on Tuesday, December 8 at 10 p.m. (check local listings), on PBS's Emmy Award-winning series Independent Lens, hosted this season by Maggie Gyllenhaal.

As part of this event, Community Cinema will be presenting screenings of the film in local communities across the U.S., in collaboration with OrigamiUSA!

OrigamiUSA is proud to support ITVS’s national Community Cinema screenings of this acclaimed documentary, which is coming to over 50 cities across the U.S., starting in September 2009 and continuing through October and November.

Between the Folds introduces a determined group of scientists and fine artists who have abandoned conventional careers to forge new lives as modern-day paper folders and artists. Together they reinterpret the world in paper, creating a wild mix of sensibilities towards art, science, creativity and meaning.

Community Cinema is a groundbreaking public education and civic engagement initiative featuring free monthly screenings of films from the Emmy Award-winning PBS series Independent Lens. Presented by ITVS in partnership with leading community organizations and public television stations across the country, Community Cinema brings community members together to learn, discuss and get involved in a range of timely and compelling issues.

Between the Folds will have its broadcast premiere in December 2009 (check local listings) on the PBS series Independent Lens. To find a Community Cinema event near you and to learn more about the film and the issues, find the screening closest to you here:

Learn more about this amazing documentary at the website of its producer, Green Fuse Films:

Can't wait or it's not broadcast in your area? Buy the DVD at the link below!