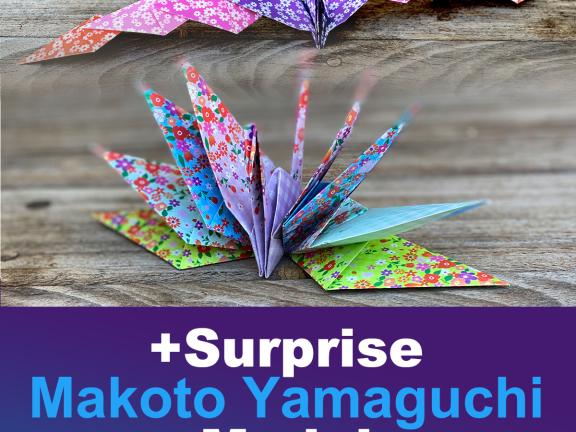 November 11 is Origami Day in Japan, where the paper crane has become a symbol of peace.

Paper cranes are the most popular form of origami, and have transformed the meaning behind these little works of art. The crane became a symbol of peace in Japan, where you can see strings of cranes placed at temples all over the country as well as at the Peace Park in Hiroshima. On our last day of World Origami Days (and the actual World Origami Day Celebration in Japan), we will fold the crane and a few variations and celebrate the peace of paper worldwide.

We will fold 2 crane variations. One is created by Tomoko Fuse and the other is a variation by Akiko Yamanashi.
Fuse-san's version is called "Crane with Flapping Wings" in English (Japanese name: 羽ばたく鶴 habataku tsuru).
It's published in Italy's NUINUI magazine called "Origami Modulares" in 2016. Also in Japan's NHK magazine "素敵にハンドメイド (suteki ni handmade)" January 2018.
It was also taught by her at OrigamiUSA Convention 2016 to the entire attendee group when she came as the special guest.

Yamanashi-san's version is called "Crane with Extending Wings in English (Japanese name: 羽根の伸びる鶴 hane no nobiru tsuru).
Yamanashi-san also likes to use the extending parts on other models or by themselves like plant vines, in decreasing sizes, but people seem to find it most interesting as attachments on cranes.

Several sheets of 6"/15 cm kami and scissors to cut paper.