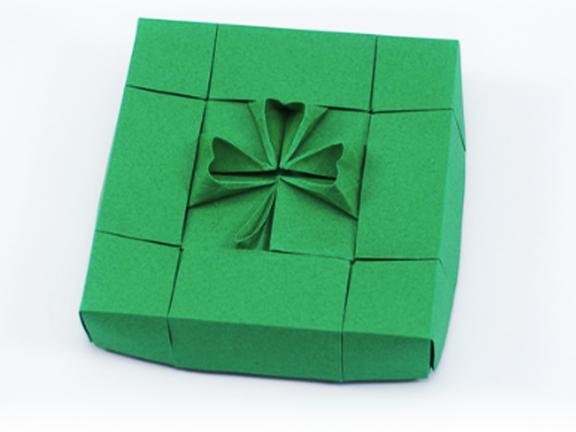 In recent years there has been a great buzz around a new area of origami: Tessellations! This is a way of making a pattern where one or more shapes are placed together leaving no spaces between them, and then repeated over and over --- think of a bathroom floor or wall. Origami tessellations have folded shapes that are repeated over and over using just one piece of paper, or sometimes fabric. Michal Kosmulski has created many unique patterns and designs in origami using tessellations.

We'll fold two variants of the model: the first is intermediate difficulty, then we'll move on to the other variant which is complex difficulty. I think it would be OK for people with intermediate folding skills to join for just the first variant if they don't mind folding relatively fast (I will use this model only as an introduction to the more advanced one).

We'll fold a box with a shamrock/clover on it. The shamrock can also be used as a tessellation molecule.