10 Years at CDO: A Decade in Review With a Focus on Games

In June, I was contacted by an origami enthusiast from India who wanted to know if he should attend the Centro Diffusione Origami (CDO) convention in Italy.

The CDO was the first international origami convention I attended, and it was held in one of the most remote places I’ve ever been: Tabiano, Italy. Since then, I have enjoyed conventions in Poland, France, England, Spain, Germany, Japan, Mexico, and Israel. With a few exceptions (I am the head of OrigamIsrael), I have attended these conventions only once. So why have I returned to the CDO for the past decade?

The Italian convention, for me, has the best balance of all the parameters of a convention: timing, price, location, length, number of participants, level of workshops, shop, special activities, language and — last but not least — food.

One way to explain this balance would be to analyze all those aspects and compare them among the various organizations. This would be the left-brain approach. I won’t go down that road. Instead, allow me to take you to the heart of the matter. Let us take a tour by way of feelings, not numbers.

I attended the 2019 convention in Tirrenia, in the province of Pisa, with 10 fellow Israeli folders. Our trip to CDO took us through the Bologna Airport, Florence’s Santa Maria Novella train station, and Pisa’s central train station. At Pisa Centrale, a cab driver, holding an unfolded sheet of paper with my name printed on it, waited for us.

We arrived at the convention hotel just in time for dinner, but before that, we had to joyfully surrender to a long line of hugs and kisses from the early-bird folders who had already arrived. This joy says it all. You just can’t take the smile off your face. The only downside to this hearty welcome is it all happens at the door of the restaurant, where all the food is waiting on the buffet tables.

People may have different needs and opinions, but for me, the great hall is the hub of the convention. I spend most of the day there. I can feel the heartbeat of the convention, see everything that happens, and stay in control. During my earlier conventions I would sit between two tables at which workshops were being held and participate in both. But I can totally understand conventiongoers who just can’t enjoy a workshop unless it is in a quiet room with no disturbances and no distractions. 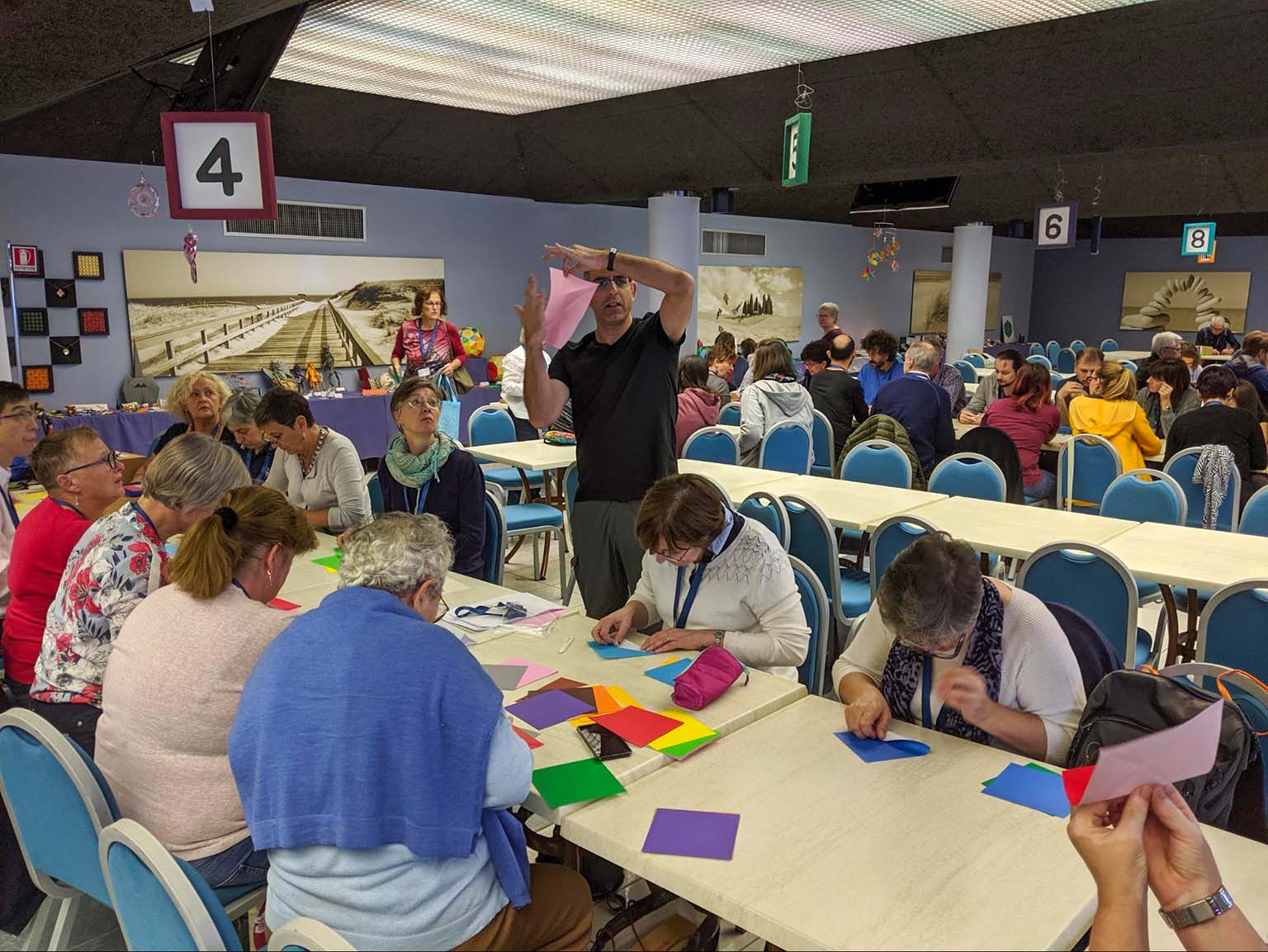 Elad Goshen, from Israel, teaching his model at the 2019 CDO convention.

For me, the structure has to stay loose. I spent 25 years in the military, and my second career has to have the opposite properties. Origami symbolizes freedom and sharing. I want to do what I want, to be a kid again, and to enjoy the simplicity that comes from sitting together and folding.

I find the spirit of the Italian way is just right for me!

One of the best features for me was the games. A team of two, Antonella Graniero and Pietro Colombo, gathered all the young-in-spirits to the edge of the hall, divided them into groups, and started to challenge them with all kinds of games. Some of the games in my article The Incomplete Guide to Origami Games came from CDO game events. The only downside was that due to the nature of the event there was no time to translate the instructions into English. I never missed a game night in all the years I attended, and even won a few prizes.

In 2018, the game night was gone! When I asked Antonella and Pietro what happened, their answer was simple: “We were too tired. Next year, why don’t you do it?”

Well, since I hardly ever leave a challenge unattended to, and since this was the best way to ensure there would be games, I said, “Sure!”

So, this time, I took an active part in the CDO convention. I announced the Origami Olympic Games, and I am going to share my complete list with you.

The first step was to form the groups. I gave each group a name and had participants gather under each group banner.

My group names were based on interests and traits: Pizza Lovers, Came by Airplane, Spanish Speakers, Left Handed, Tessellators and Free Spirits.

As you can see, the categories were broad enough to include everyone, but they also allowed for more homogeneous groups.

Task 1 was to fold a hat that would fit the name of the group. We had huge papers in vivid colors for each team to fold. You can imagine what the shape of the Came by Airplane team was.

I appointed a judge who gave out points: five points for the best-looking and -fitting hat, three to second place and one for the third. Representatives from four of the groups show off their themed hats.

The second task was straightforward: Fold and flap as many flapping birds as you can in five minutes. Of course, there was a catch. Participants were only allowed to fold while wearing yellow rubber kitchen gloves. When finished, participants had to take the gloves off and give them to the next in line. If you have never tried to take off a pair of rubber gloves under time pressure, give it a try. It is harder than it looks.

The winning group folded the bird from a waterbomb base since it is faster to make. Again, what sounds like a straightforward task never is. For the third game, I asked groups to fold as many houses as they could within five minutes. We used a model by Roman Diaz, following diagrams I supplied. To understand the catch, click on the link in the caption. To view the complete challenge diagrams, see the PDF.

If you would like to view the original diagrams, they appear on page 34 of issue 4 of the magazine 4 Esquinas, which you can download by clicking on the photo of the cover on this web page.

The task was to fold the Star Box, a well-known traditional model, although we also projected the diagrams. (See here for Jo Nakashima's video tutorial.) This time, the handicap was to use only the left hand (or the right hand for the left-handed group) while working in pairs.

I broke each group into three pairs and told them to fold as many baskets as they could in five minutes.

It is hard to fold using only your weak hand and it is even harder when you have to cooperate with another left hand! The Final Game: the Shootout

Do you know how to fold a Banger? Good. (If not, see here for British Origami's diagrams.)

The contest: Fold one from an A3 (or a tabloid size) sheet of paper and unfold. Rest on your knees, back to back with your rival, hands up, with the paper on the floor.

Start to refold it. The first to boom his Banger wins the duel. The loser retires from the game. Quickly we were down to eight, and then four, with everyone fighting for the third place before the grand finale: the duel between the fastest folders in the west! The final duel of the Bangers.

Even a Five-Day Convention Ends Too Quickly

So, why do I keep returning to the CDO every year? It’s that feeling on the last day that says, “I want to come back; let’s count the days.”

This year I had a special reason to feel that way. On Saturday night, just before the games, the CDO said thank you to all the teachers. Not just by word, but also with a round of applause and a lovely package for each of them.

It’s a beautiful gesture we, in Origami Israel, adopted as well.

But at this convention, just before that, the CDO board nominated me as CDO’s Ambasciatore del Mondo for my attendance and contributions. I was at a loss for words. It’s been an honor to share my models and my experience with my friends at CDO for the past decade, and I look forward to sharing more models and playing more games in the coming year.

So, I guess you know why I think CDO is the best convention in the world. Come join us, and experience it for yourself. The author's medal for being a CDO ambassador to the world.