All That's Wrong in the World of Origami Publishing

The surging popularity of origami is clearly evidenced by the number of publishers trying to cash in on it. So many companies are now making origami products. Unfortunately, in their drive to make a buck on the latest trend, they are cutting corners, resulting in decidedly sub-standard products. Many of these products seem to collect information found on the Internet, and the folds themselves appear to be either traditional models or badly designed models. No checking is done by knowledgeable origami reviewers, leading to instructions that are simply wrong. The publishers try to cover up these short-comings by dressing up the books and kits with flashy graphics. The problem is that people new to origami will get drawn in by the glitz and glitter, and then will give up in disgust. 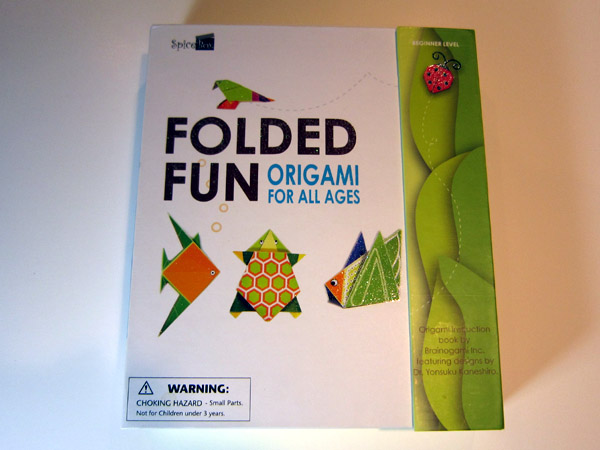 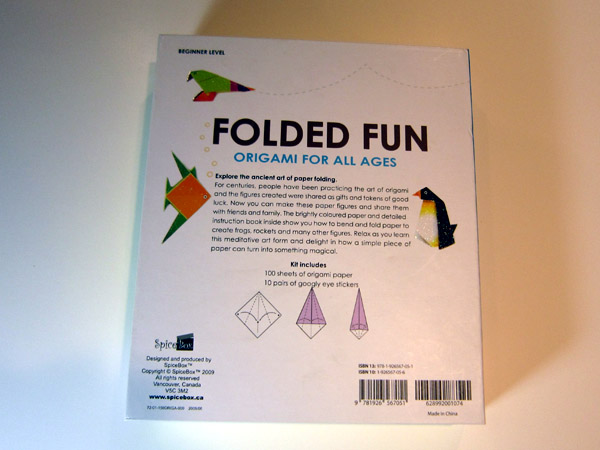 I discovered this particular kit at Costco, and I bought it because it was published by a local publisher, SpiceBox. I discovered later that the creative director on the project is a past acquaintance of mine. My son and I worked through some of the models in this kit, and I was disgusted by the poor quality of the instructions. This is why I'm using it as an example of what not to do when publishing an origami kit. 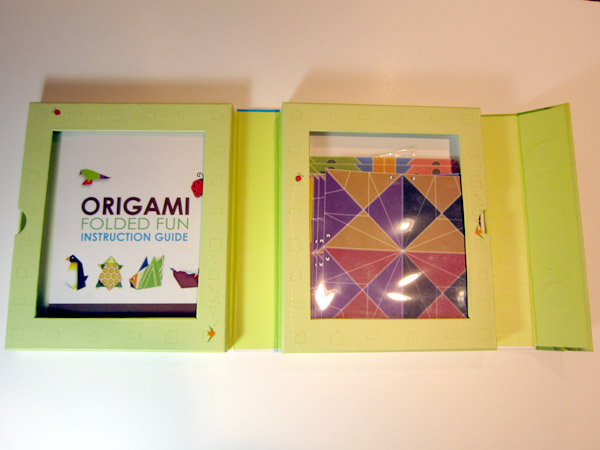 As previously mentioned, the boxed kit is pretty and inviting. The box features a magnetic closure to keep everything from falling out. The two compartments keep the book and the paper separate and organized. 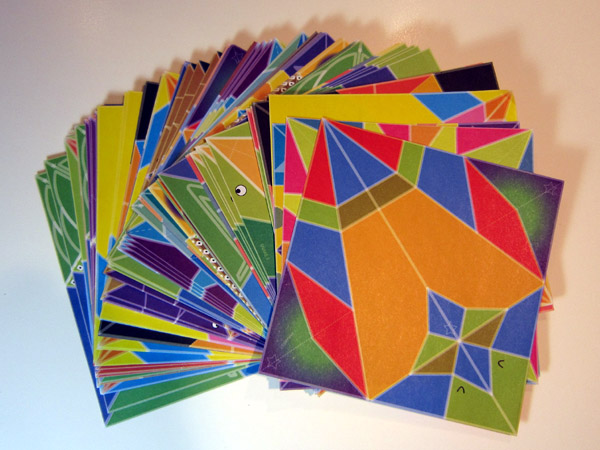 The paper is all preprinted with colourful patterns that are based on the crease patterns. While this makes them dynamic and fun, I find it actually distracts from the folding process, making it more difficult to understand what needs to be done. Besides, the diagrams do not have these patterns, leading to further confusion. 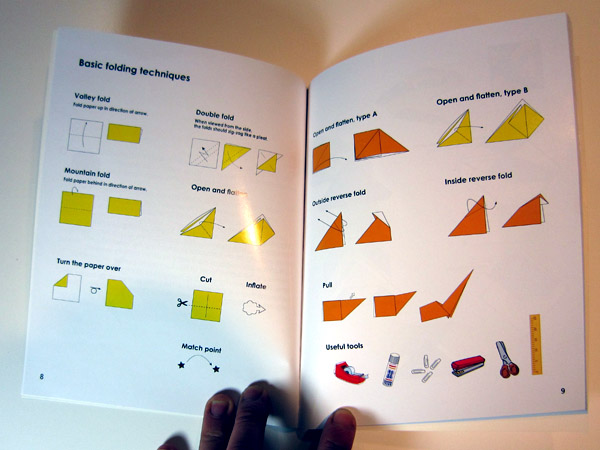 Right from the start, the basic folding techniques page highlights a number of problems. Valley and mountain fold lines (and cut lines) are the same. Outside reverse fold arrows point in the wrong direction. The inside reverse fold arrow goes on the outside of the paper instead of the inside. And the "pull" instruction appears to distort the paper as if it were made of rubber. 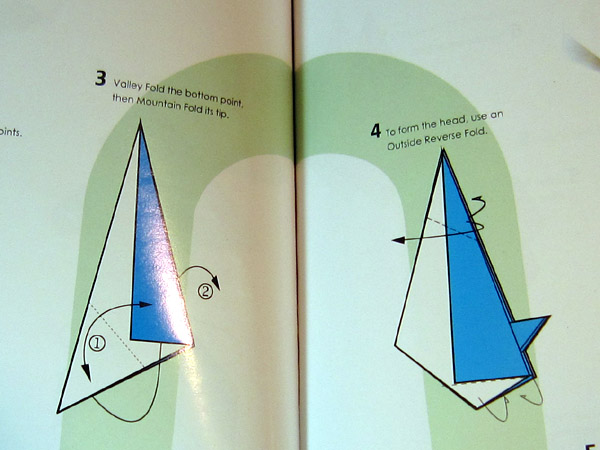 In the penguin instructions, the text for step 3 does not match with the steps shown in the diagram. And in the diagram, sub-step 2 seems to tuck the point under another layer paper instead of being an inside reverse fold. 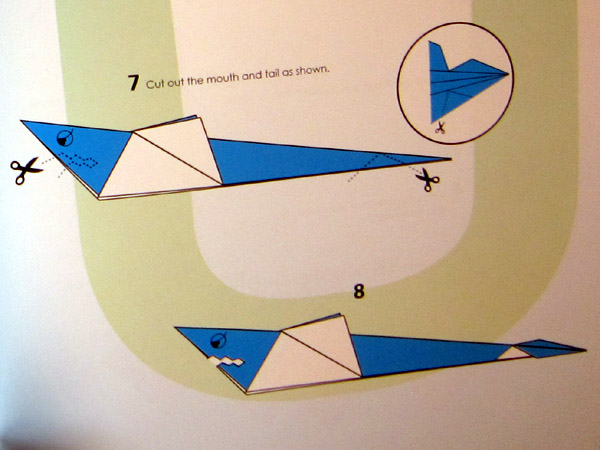 The cutting of the tail is very unclear. The main image seems to indicate cutting the tail tip off, while the small pull-out image shows more details, but without showing how to get there. 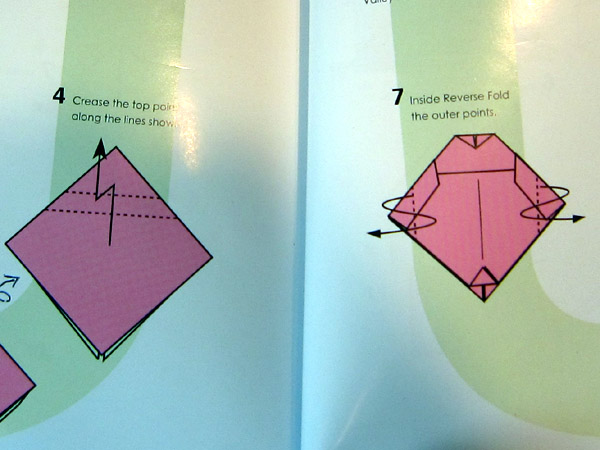 In the pleat, the mountain and valley folds are the same line type, and the inside reverse fold arrows go over the top of the layers that the fold is supposed to go through. 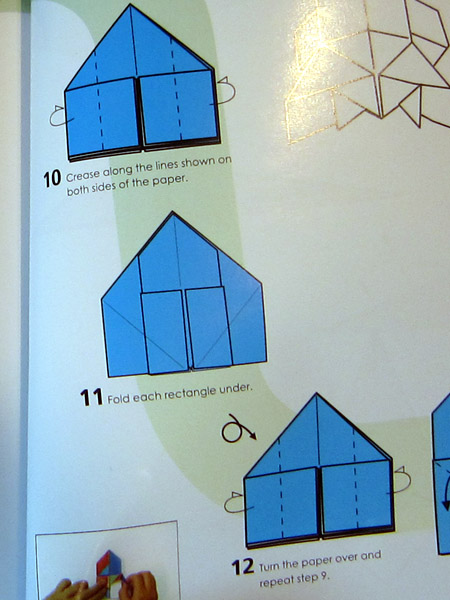 Step 12 says to repeat step 9 on the other side. Unfortunately, the step to be repeated is actually step 10. 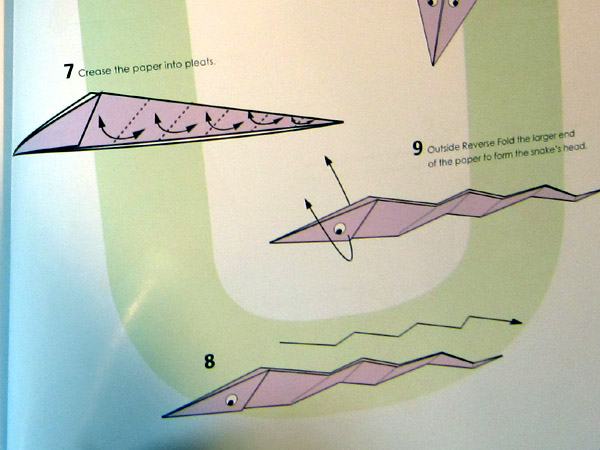 Step 7 says to crease into pleats, but all of the folds are valley folds. Step 9 talks about an outside reverse fold, but this is really just slightly opening up a couple of mountain folds.

So, while this is not the worst offender in this parade of cheap origami publications, it certainly showcases some of the problems that are typical of these books and kits. And, the worst offence, in my opinion? They included googly eyes.