In Fécamp, France, 700 pupils (50% of the school children) participate in extracurricular activities at the end of the school day. Thanks to a partnership among local associations, teachers and other external projects, children can participate in basketball, tennis, cooking, pottery, puppet workshops, and, of course, origami.

I settled in the city of Fécamp in September 2014, at the time that I became a professional Origami artist. I was able to integrate the extracurricular program into my schedule, working with 15 students each evening of the week, ranging in age from six to 11 years old. The workshop takes place on the school premises. At this time of day, they are not necessarily attentive when they would rather play. Moreover, from the moment they enter my room, and I take attendance, we have a total of 30 to 40 minutes together, during which some turbulence happily animates the group.

Teaching origami in a methodical way by advancing to the rhythm of a model a day, including the “folding symbols and techniques” and the traditional bases over the weeks and bringing the construction of a model under these conditions therefore falls within the challenge over time.

At the end of the cycle (duration between two vacation periods) students are able to reproduce four traditional bases (fish, water bomb, preliminary, and bird) and five to 10 different models from these bases. 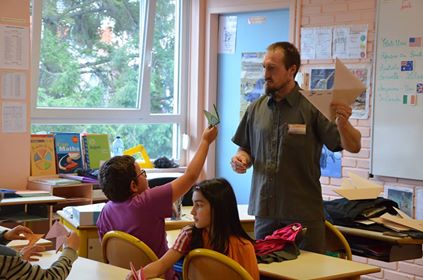 Show me what you have.

In this third year I can affirm that the origami during the extracurricular activities has had beneficial effects:

I often tell them that if I can do it, they can do it and the students realize that the success of their achievement stems from their own activity rather than from the "teacher”. To succeed, students should observe and listen carefully to specific instructions and then practice them with clarity and precision. The pleasure comes from the re-creation of the model.

Throughout the sessions I can observe that they develop their patience and ability to concentrate, I enjoy seeing their pride in accomplishing the work and for some a strengthening of self-confidence.

Transforming a square of flat paper into a three-dimensional figure is a unique exercise in geometry in space. Origami is also important for understanding symmetry; in many folds, what is done on one side is also made on the other side. Folding allows them to create and manipulate geometric shapes such as squares, rectangles and triangles as well as division of angles and lines.

In a mixed age group, folding tends to narrow the gap. Sometimes the youngest are able to teach the older ones. Students who are not particularly motivated at the beginning quickly assimilate the Origami and help their comrades to progress. Thus folding brings students together around an activity, where collaboration for the gratifying realization of a group project takes place. Such truly constructive activities reinforce the feelings of know-how and unity within the group.

Learning Origami is an apprenticeship with repeated actions. By folding, children use their hands to follow steps in sequence, producing a visible and pleasant result. The steps must be carried out in order for the success of the model – they acquire a methodology, an important lesson not only for mathematics but also for life.

In this third year of service, I thought to bring them a lot but in truth it is they who bring me much more. When one works every day of the school year, it is essential to arrive with a new subject each day, and all the more the following year, and so on. So I had to renew myself strongly while keeping in mind that my new models had to be done in 30 minutes, so I learned to go to the basics – in short I suffered a lot (while enjoying it).

I have always enjoyed seeing some students from one year to the next and seeing that they have learned the lessons, that some have bought books to continue at home, and that some have even acquired the vision necessary to create their own models. I am convinced that practicing origami has increased their creativity, their logic and an ability to interact with others.

I taught an after school

I taught an after school program as well ... I started when my son was in the third grade and stopped about 6 years later. I learned that Friday afternoon is not a good time - kids are too eager to go home for the weekend. I saw the same things that you did though - kids would help others. Over the course of the class I would see sloppy folders tighten up their folds and models would look much better. Sometimes I had to slow the kids down - they wanted to race through to get to the next model. It was a lot of fun - for me and hopefully for the kids.