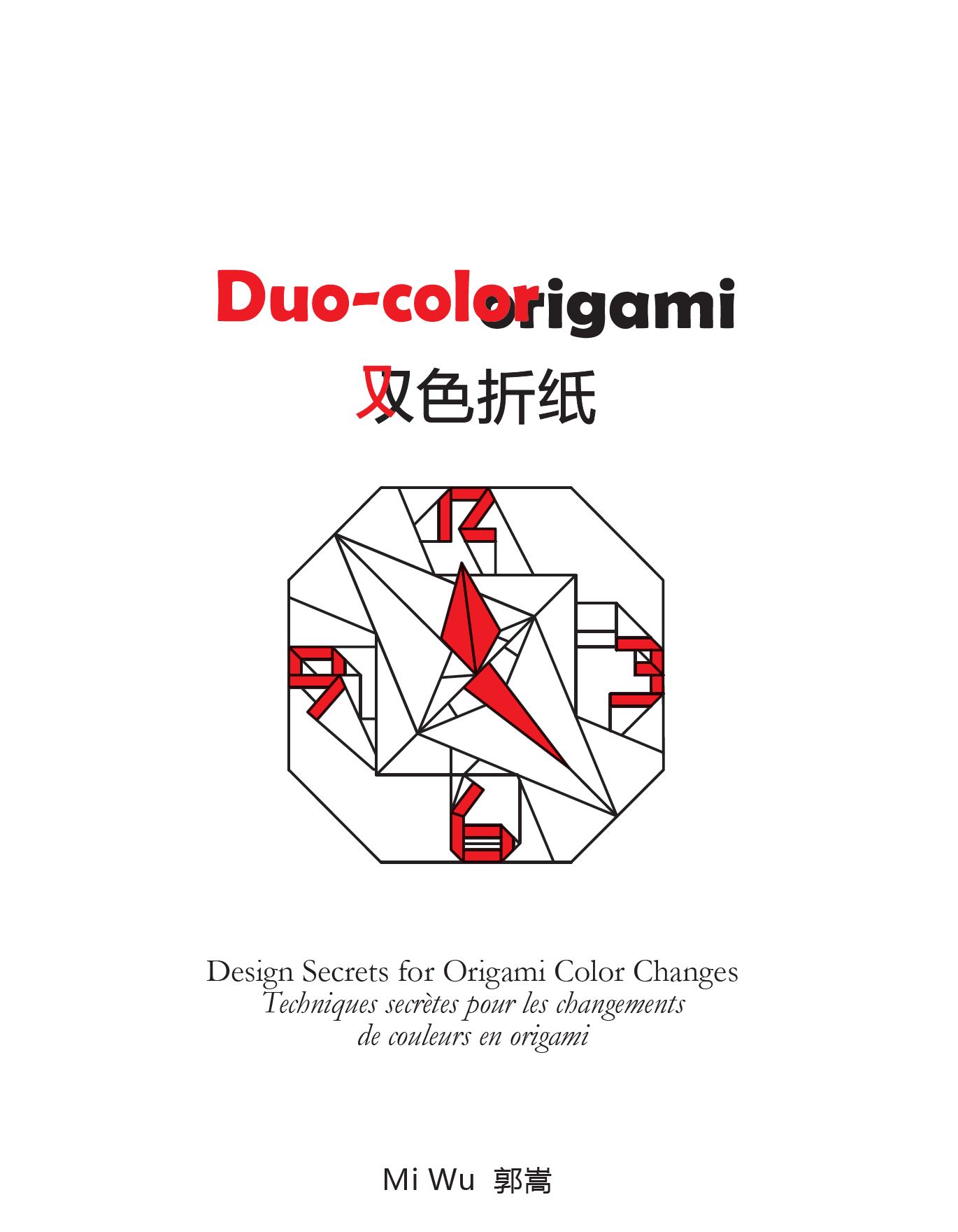 We rarely see Chinese origami artists in the West. Not until the first Origami World Marathon did I hear about Mi Wu (his real name is Guo Song), and his model caught my eyes with its originality and cleverness. It was a seven-segment construction that can be played with to show the digits from 0 to 9. How come I didn’t think of it myself?

I was really excited to see that the newest book from Nicolas Terry’s production line is a volume dedicated to Mi Wu’s works, all of them a play on the color-change motif.

As the subtitle announces, this is a book of “Design Secrets for Origami Color Changes,” and with 26 models (all but two are flat), this book seemed highly promising. Did it deliver? Let’s start the review and see.

The models are presented in three chapters. The first two, “Toys and Objects” and “Badges or Coins,” contain only flat, color-change models, where the colored side of the paper creates a shape on the background of the white (or second-color) side. The third part, “Figurative Models,” has more variety and includes flat models like the Lion and the Panda Face.

There is no evidence of a level-based ordering of the models, and there is no indication of difficulty. The average number of steps is 62. The shortest, the Tulip, has 15 steps. The record (129 steps) belongs to the last model in the book, the Dog.

The illustrated table of contents is spread over five pages.

Next is a 12-page section that presents the theory behind the designs. It begins with a glossary and then explains the design process. It is always interesting to learn how a creator designs models, but after reading the section, a gap between Mi Wu’s explanation and the way a design is materialized in his head remained. I guess there is always a part of creativity that cannot be put into words.

The diagrams are by the author. There is very little text, and what there is states just the name of the action, like “Reverse fold.” The symbols are mostly conventional. The only deviations are for valleys and inside-reverse folds. Valleys on existing crease lines are shifted to the side a little, and inside-reverse folds are shown with mountain and valley lines and an arrow that indicates the direction of the fold, rather than the more typical outlined arrow, so if you are not focused you can miss it. Still, once you get used to this notation, it doesn’t really slow you down.

It’s easy to miss the mountain line that makes this valley into an inside-reverse fold.

Usually, the grid has four rows, with three steps per row. The density of the steps is convenient to the eyes, although in some cases the folder might wish for the digital version and the ability to zoom in to see all the details.

Arrows do not indicate a point-to-point maneuver but show the general direction in which the paper should move. Since the process relies on a grid and many precreases, I would prefer to have the arrow more accurately supply information about where to place the corner of the paper. The arrow below shows only the orientation of the fold, and it’s not easy to see that what you are meant to do is to get the corner to the marked red dot (which is my addition to the diagram). 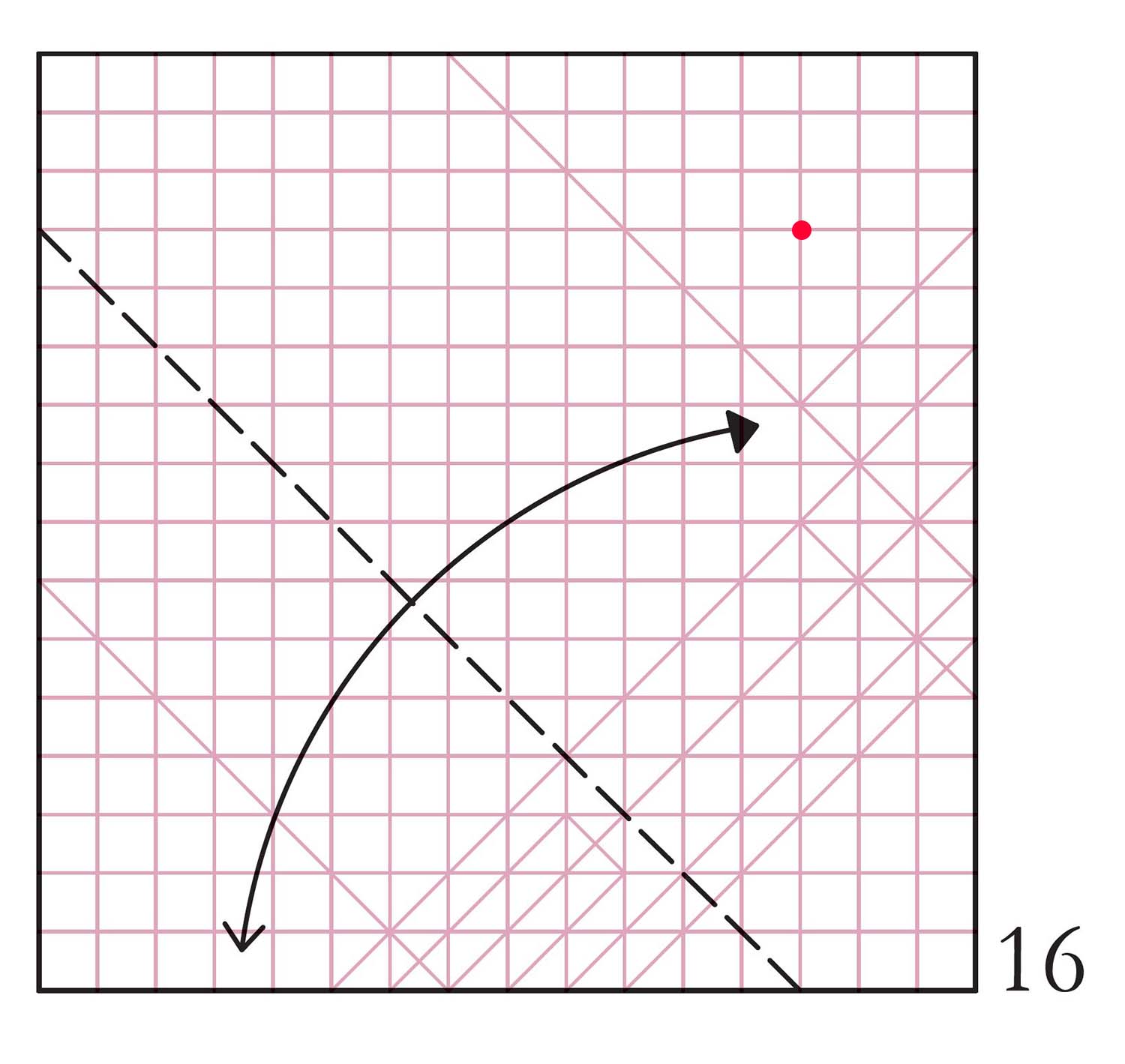 Where does the corner go?

Another major issue is that many layers accumulate while folding, but the diagrams do not show exactly which layers should be folded. You can assume that if no layer is mentioned it must be the top one, but it was confusing anyhow, and slowed me down, for example, in step 23 of the 2 of Diamonds, shown below. 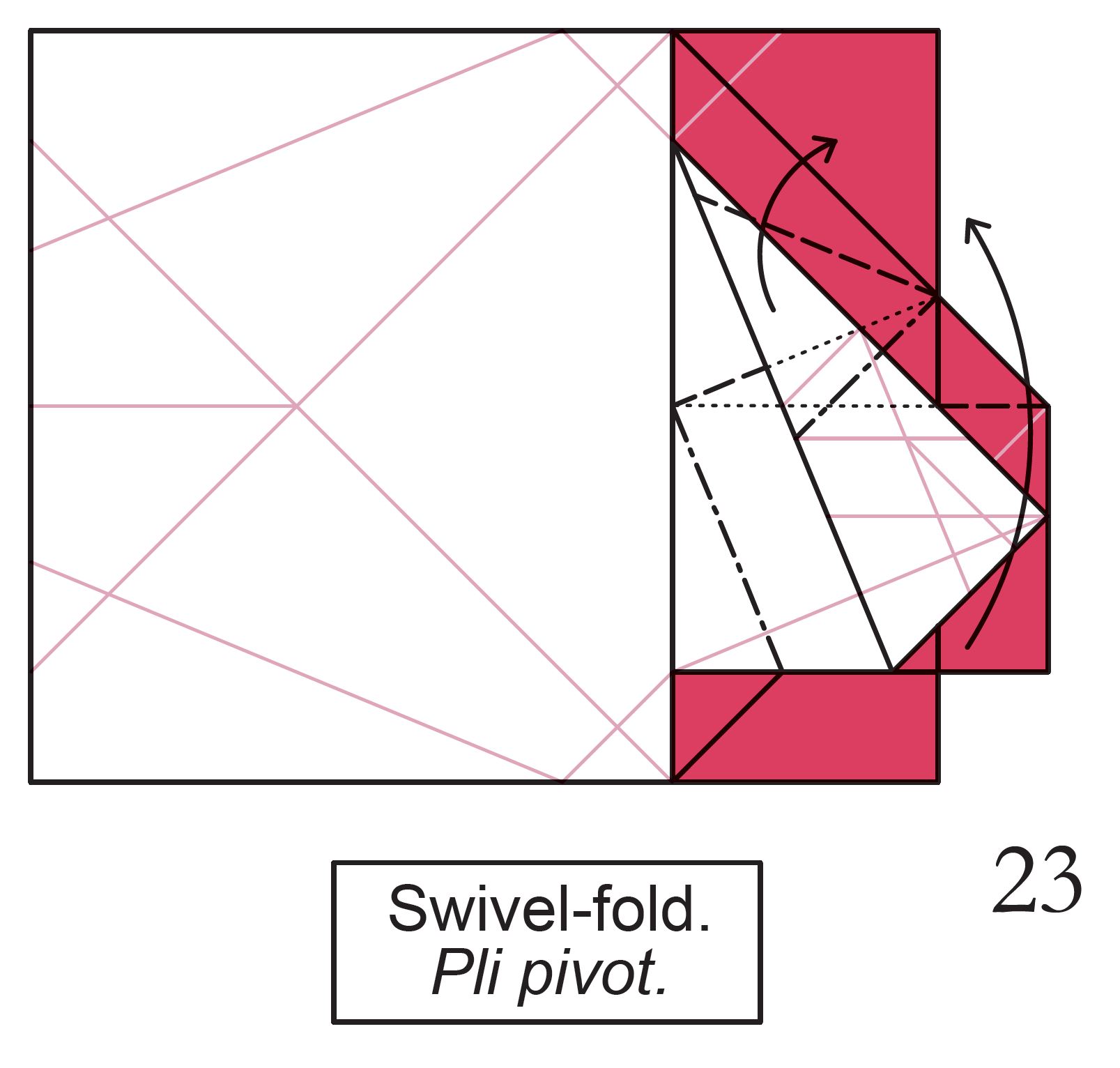 How many layers to hold when folding according to the long arrow on the right?

During the swivel, the lower mountain fold is made only on the topmost layer, but two layers were precreased a step before.

My last piece of advice is about accuracy. With this style of folding, it is a must! To get the diamond shape at the correct angles, you must not accumulate errors. If you do, the layers will not sit well. It is wise to use the thinnest paper you have to help ensure success.

Most of the models start with precreases — around the first 10 steps are fold-and-unfold. Only afterward does the real folding process start. The construction is not intuitive, and it is amazing to see how Mi Wu builds the needed layers and the change of color. For me it was a revelation. 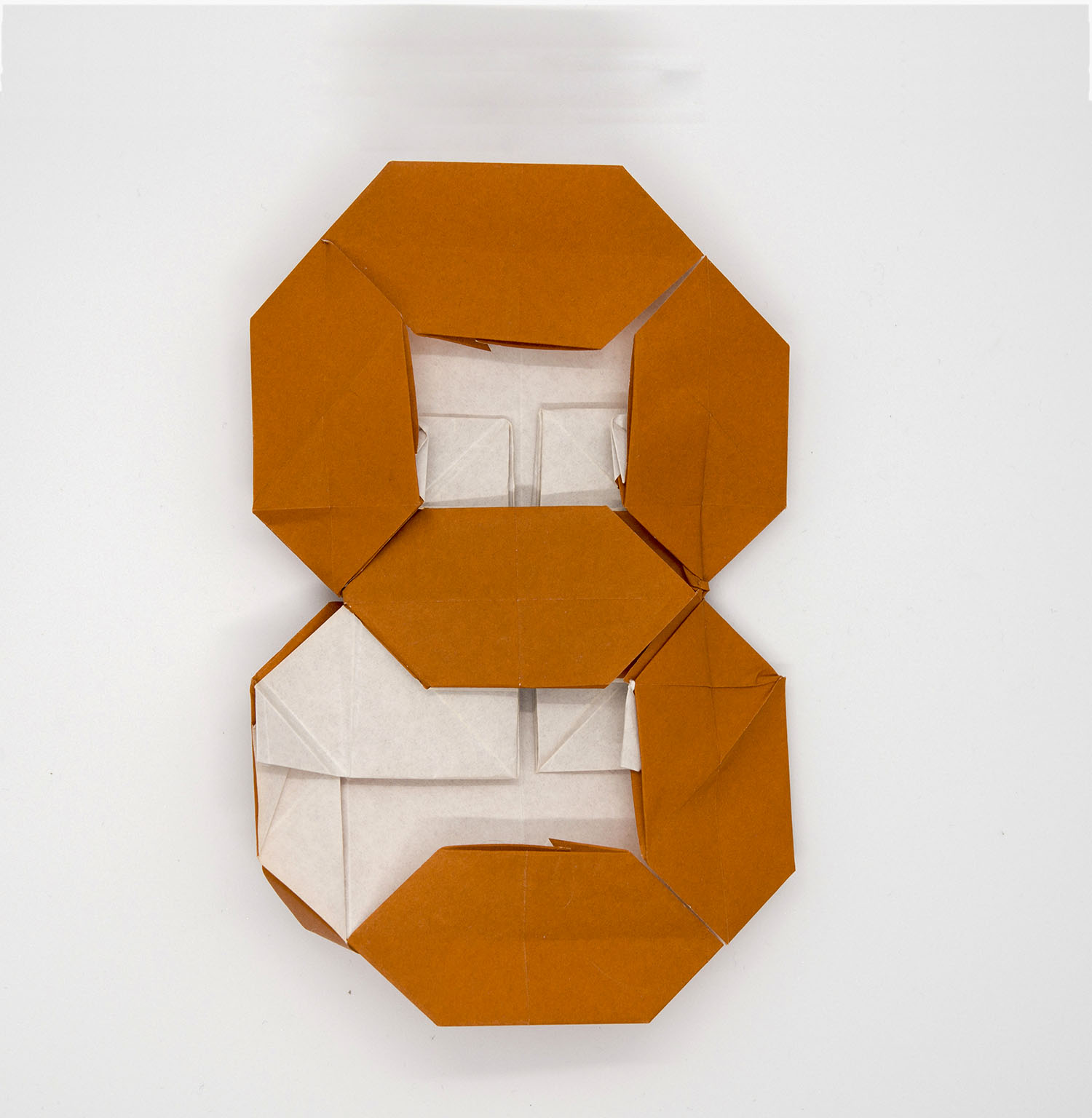 All models except the last were folded by Ilan Garibi.
This is the first model in the book, and it is one of my favorites. You start with a diagonal grid, and on top of it, you add the many precreases needed. The actual folding starts at step 15, and from there it is a straightforward process. The model is at the most intermediate. The result is highly convincing and fun to use. It is adjustable, and you can set any digit you want from 0 to 9. 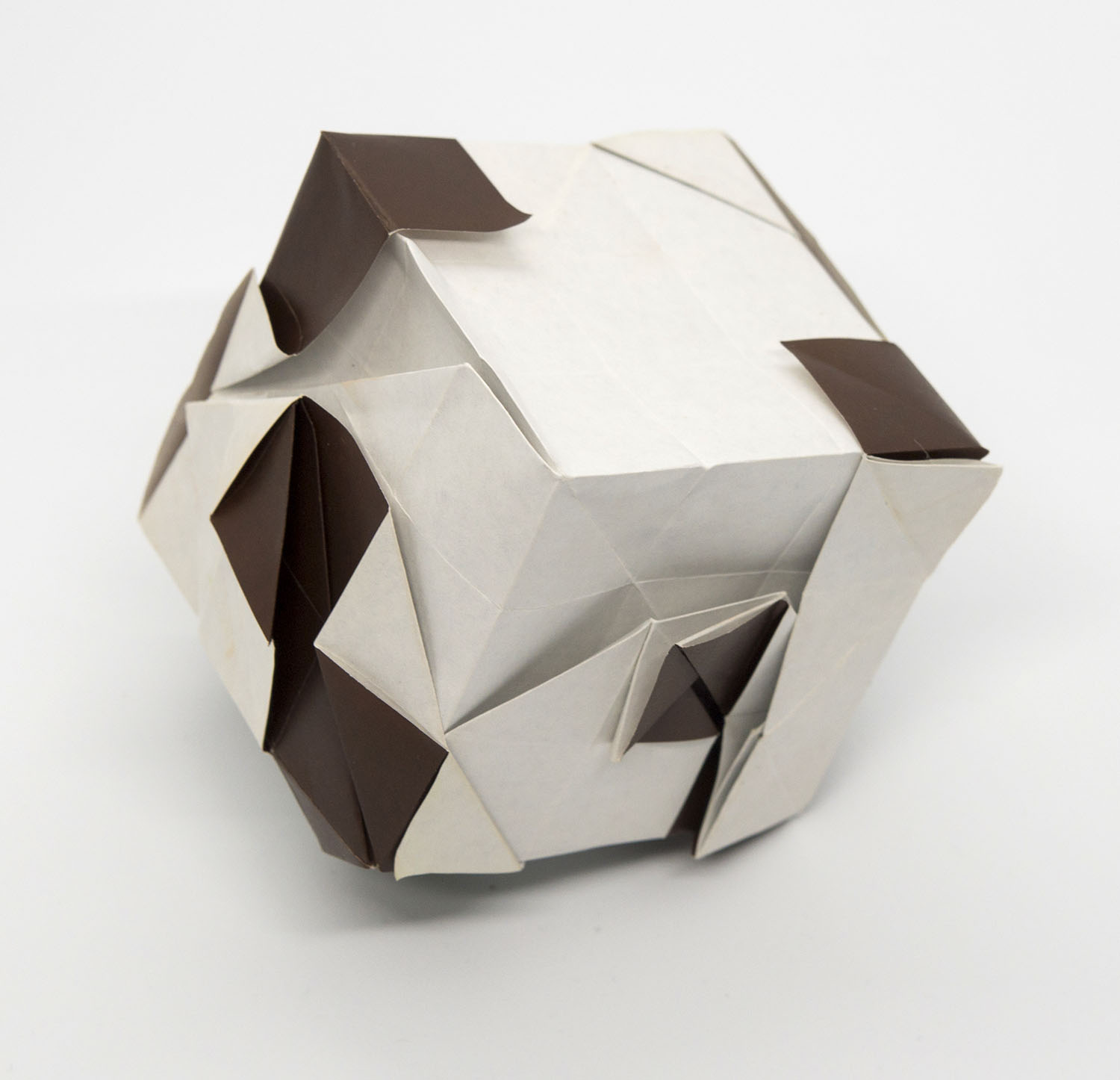 This is, by far, the most acrobatic model I folded. The number of color changes and the perfect control the author has on the location of each square are astounding. At every step, I was amazed to think about how anyone could design such complexity. Wonderful!

I do have some remarks on the spartan approach to text and explanations. At step 57, the text says “Release the hidden flap,” while Mi Wu is actually requesting a color change. Step 60 was a real challenge, and only by looking at the result and the possibilities I had at the starting point could I figure it out.

But this only enhances the sense of accomplishment as you hold the cube in your hand! 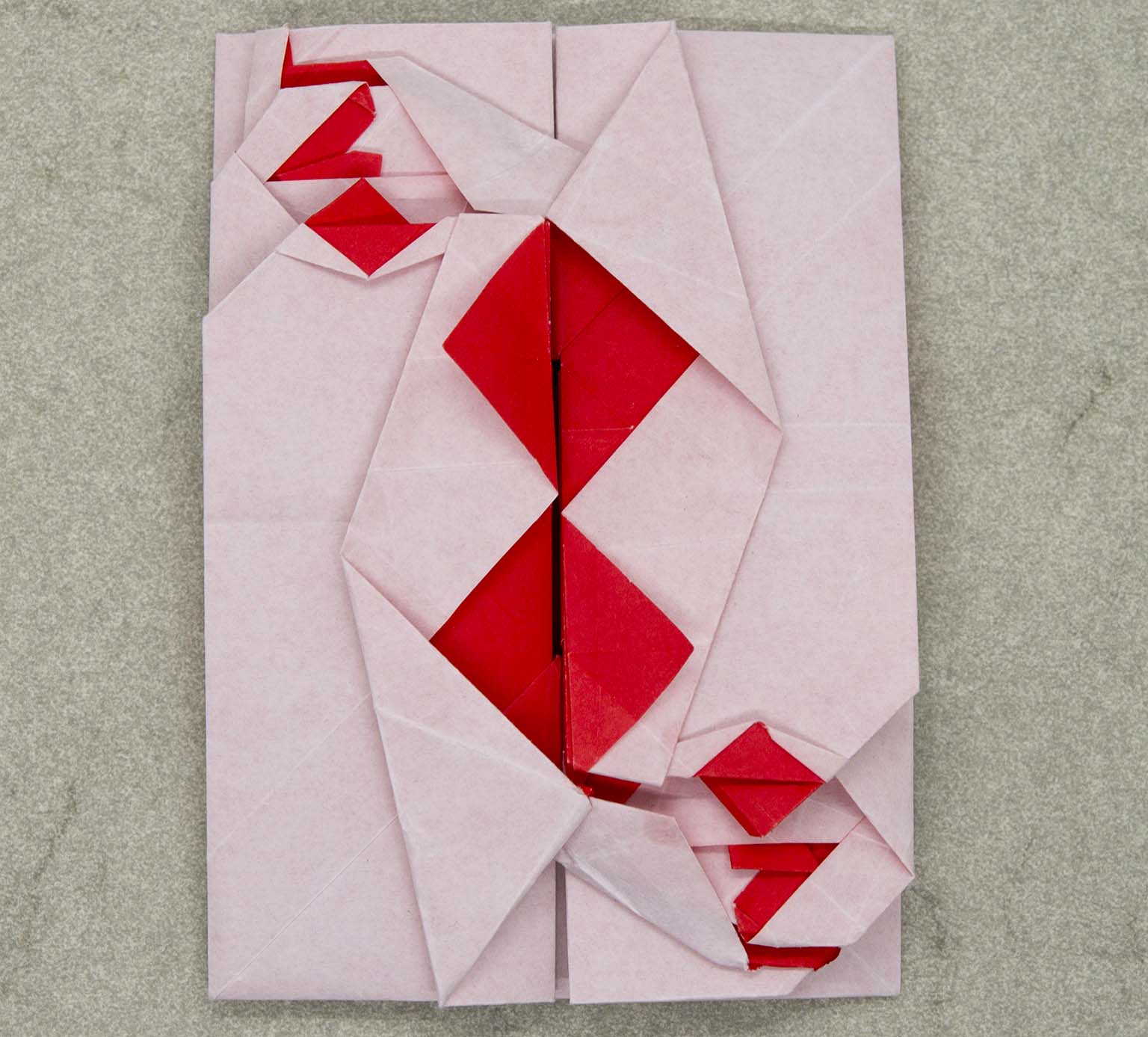 Being lazy, I picked the Two of Diamonds. After 11 steps, you are done precreasing and can start to fold. The complexity behind this design amazed me. So many steps were needed just to bring and expose the right layer for the right color change. I do not mean to say the model is complicated — it is high intermediate — but the design process is so strange that I have to admire it.

The result, if folded more accurately than I did, is convincing. 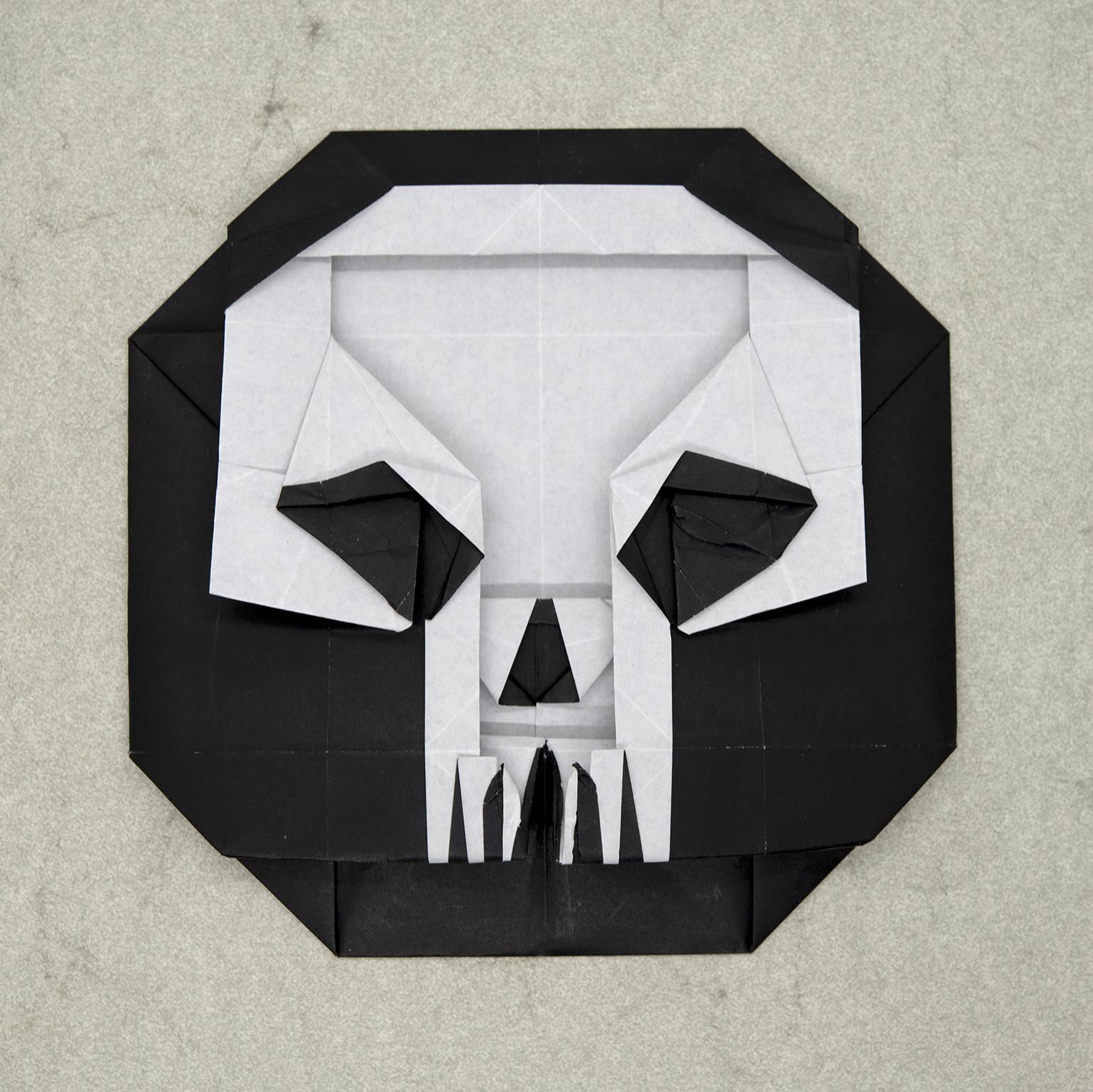 This is a 40-step model, and it takes only about 10 minutes to finish. The diagrams are clear, and the folding feels like drawing with paper. You can actually see how the face of the skull is built. I had no problem with the diagrams, but I felt that in some steps, explanatory text would have been helpful, mainly for which layer the arrows and crease lines refer to. 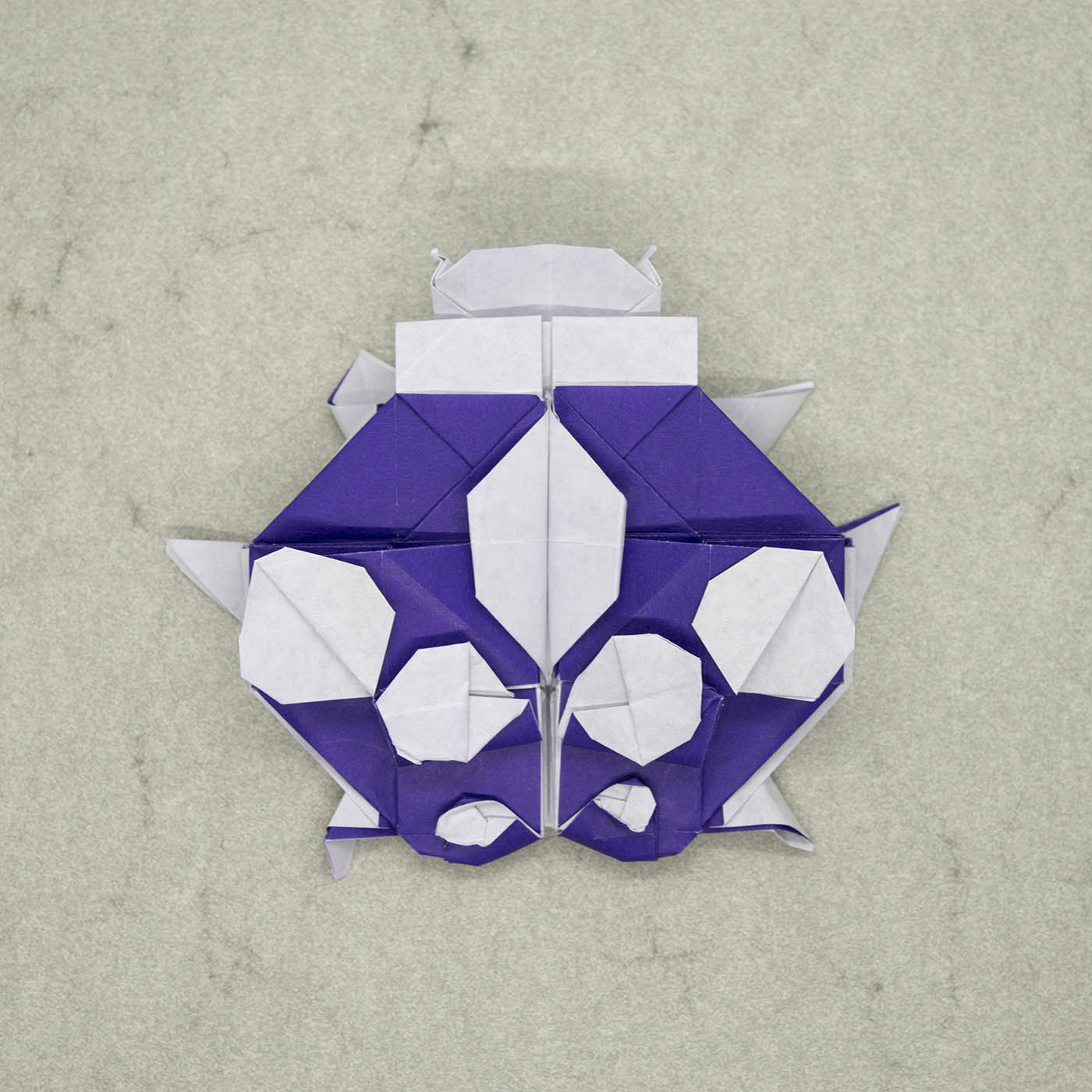 This is a tedious model, with long and somewhat confusing steps. You must be highly focused, otherwise the lack of text and the somewhat vague instructions will take you off road. The final model is not as elegant as you would assume from the long folding process, although the result does produce the promised 7-dot bug. From the point of view of color change, the model delivers, and I do admire the ability of the creator to manage that.

There are many reasons to buy a book, and this one ticks a lot of boxes on the checklist.

First, this is an innovative approach to origami, focusing on color change. Yes, color change has been here for a long time, but, as far as I know, this is the first book that really exploits the technique to the fullest.

The models are fun, and while some are challenging, all are doable and well-diagrammed. You do need to be focused and to double-check the diagrams, as you do not have much text as a back up.

The first part of the book has the added value of revealing the secrets behind the curtain of the design process. Although it is not simple, it does cover the topic well. You may be able to start and design your own models if you read thoroughly and practice the models in the book.

Bottom line: a must buy.

A My name is Mi Wu (Guo Song). I come from China. I will be 41 years old this year. I am an architect. It took me 30 years to find origami, and it came to be the most important hobby in my life.

A This book collects most of my important designs from the last five years. These models are mainly designed with two-color origami techniques. In addition, in this book, I also introduced some of my own experience with two-color origami design. In my opinion, the two sides of a piece of paper are the yin and yang of the Taiji symbol, and also the I and O of the computer, which represent the essence of this world.

Q If I could fold only one model from your book, which should it be, and why?

A If you want to fold only one model in this book, I recommend the Ladybug. Although many people before me have designed similar models, when you fold it, you will be surprised to find that each dot is implemented in a very special way.

A The most difficult model in this book is of course the Poker-Diamond Ten. I believe all the friends who participated in the IOIO competition (International Origami Internet Olympiad, article in The Fold) felt like they had experienced a nightmare when they folded it. Because when one folds this model, extreme accuracy is needed.

A In the initial stage of compiling this book, I simply put all the poker models at the front, and I did not decide how to arrange the order of the other models. Reminded by Mr. Terry [Nicolas Terry, the series editor], I discovered that I had designed too many badge models, each of which has a different layout. But they are very harmonious when assembled in a group. The moment I saw them become the cover of this book, I felt that I had really done a lot of amazing things in the past five years.

Editor’s Note: The interview was lightly edited for clarity.

Lastly, here is a taste from the author: the diagrams of the Slime. Try your hand at it! 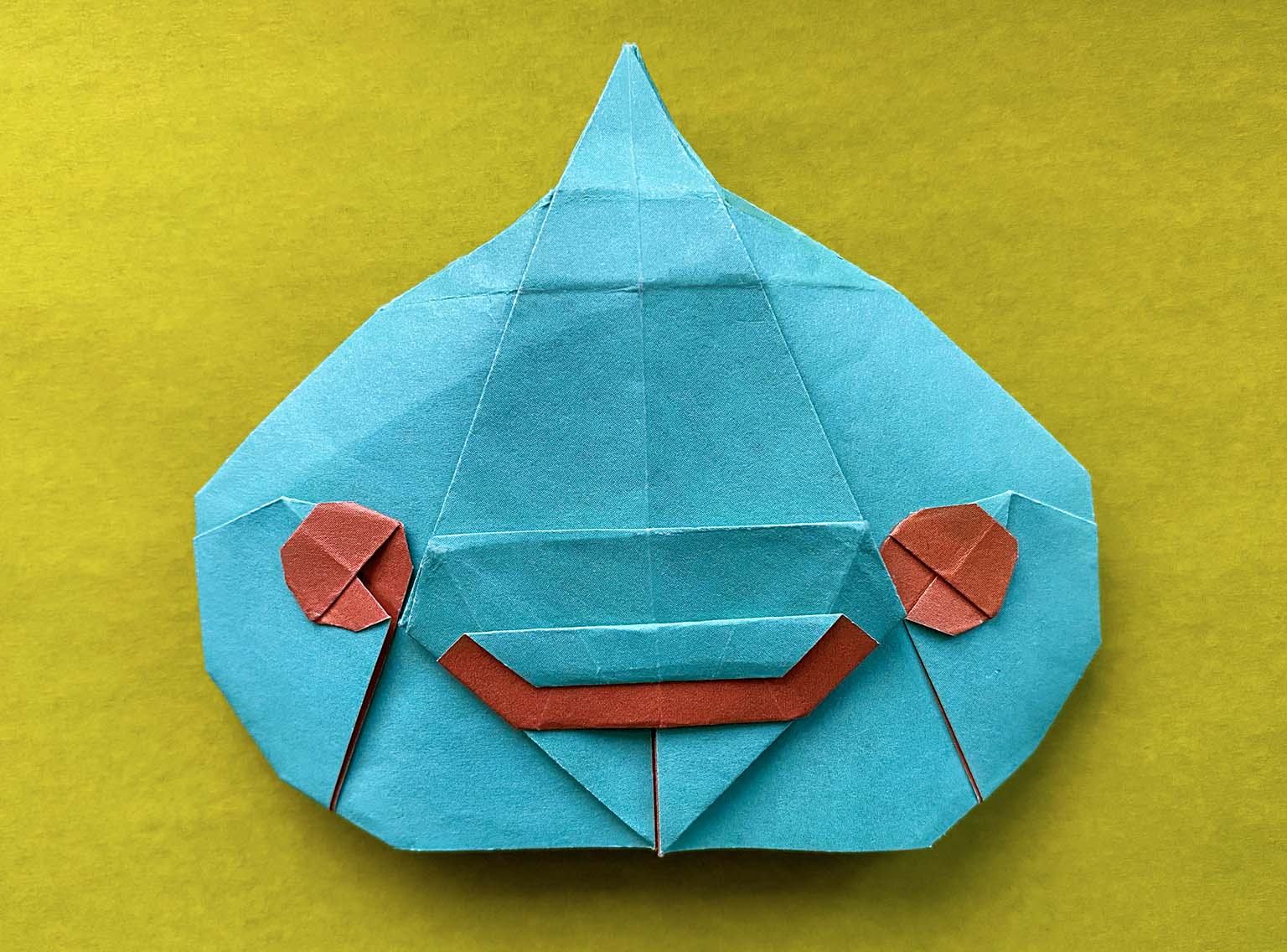 Slime ... or is it Smile? (folded by Jane Rosemarin.) See PDF diagrams.