Book Review: ‘Just a Simple Base’ by Sébastien Limet 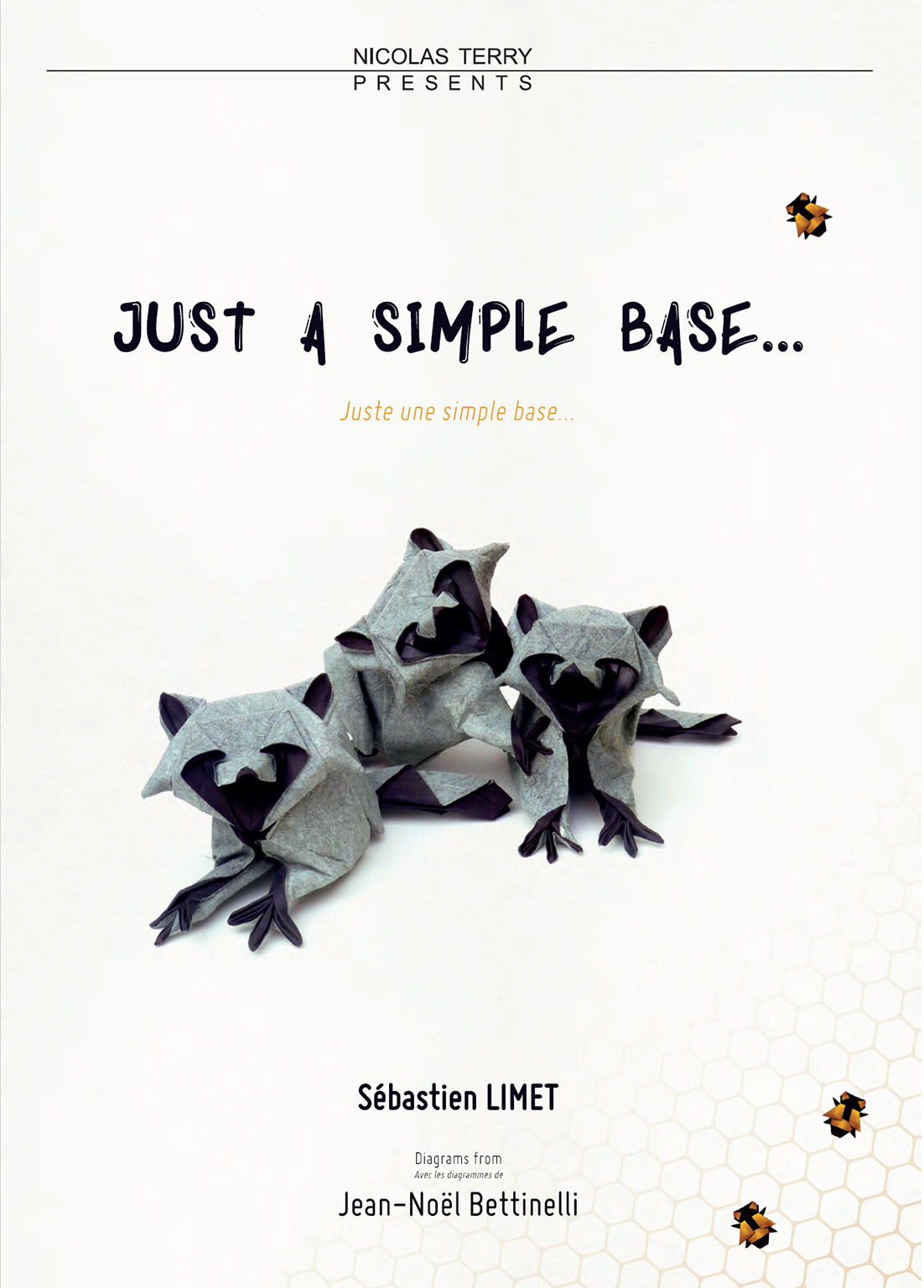 This book contains the works of Sébastien Limet, one of the most innovative creators I know. His creative method is shown right at the title, “Just a Simple Base,” which quotes his answer to the perennial question, how did you do it?

Produced by Nicolas Terry, and diagrammed by Jean-Noël Bettinelli, this is a team project that maintains the high standards Terry regularly delivers in his publications.

Origami is a rare form of sculpture in which the artist documents and shares his process of making art. Since I do not have the same skill level as Sébastien, I know I won’t be able to recreate his pieces as beautifully as he does. Of course, this will not stop me from trying because this book is full of models one has to try.

The models are presented in groups called acts. Act 1 has two parts, Classical Models and 2-in-1 Models, and both contain 3D models. The second act is a group of flat models, used by the artist to share his origami creations by showing them in everyday surroundings.

There is no evidence of a level-based ordering of the models, and there is no indication of difficulty level. Surprisingly enough, the most complicated-looking models are not the longest models in the book. The record (87 steps) belongs to On the Lookout, an owl on a tree. The average number of steps is 55.3, and the shortest is 23.

The table of contents is spread over nine pages, showing images and page numbers.

Before every act, there is an introductory page, and after each model, the author shares with us insights, anecdotes and design tips and remarks.

As with all the other books published by Terry, the diagrams are clear and concise. The grid has four rows, three steps per row. The symbols are generic and presented on two pages at the beginning of the book.

The quality of diagramming is very high. I count just a few minor mistakes. For example, the Dragon, step 9, shows the pleat arrow pointing bottom-up, but the pleat is done top-down. None of the errors really slowed me down.

As you might expect from the title, this book is about a simple starting point and not straying far from simplicity as the folding advances. You do get challenging steps here and there, but this only enhances the experience.

This is true until the last steps, when you are asked to shape the figure and raise it from a squarish look to a sculpture, to resemble most of the examples folded by the author. For that, you need to make sure you use the right paper for each model, and one should be thankful that the author specifies the papers most suitable for the model and sizes for each paper type.

All the papers are from Origami-Shop.

Act I: The Magic of Creation: Part 1. Classical Models 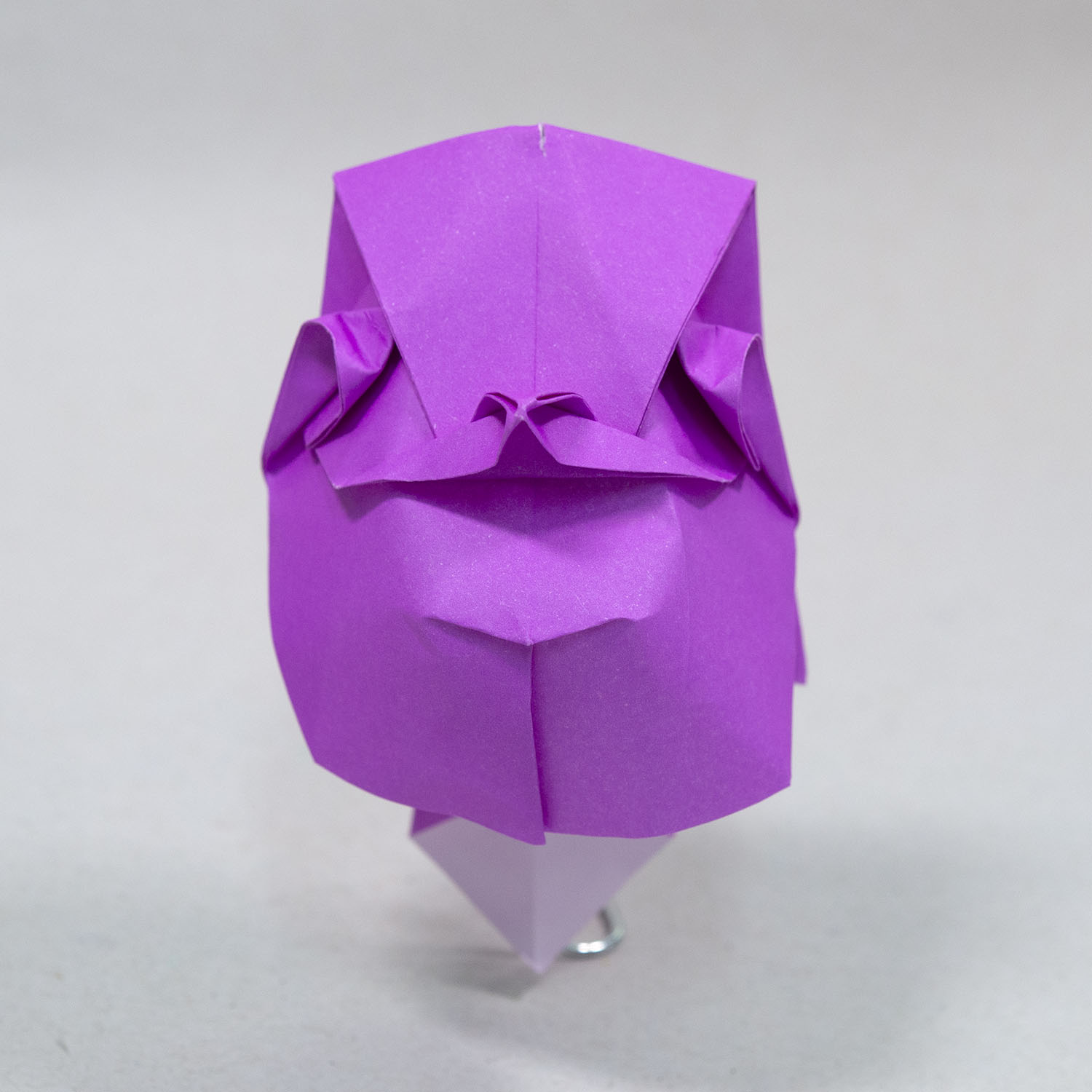 What a good start! As promised, we begin with a general base, and after about seven minutes, you have it! The diagrams are clear (although I do think some remarks about which layers to fold are missing). The final result has volume, is well balanced, can sit nicely on a stand and screams, “I am an owl!” 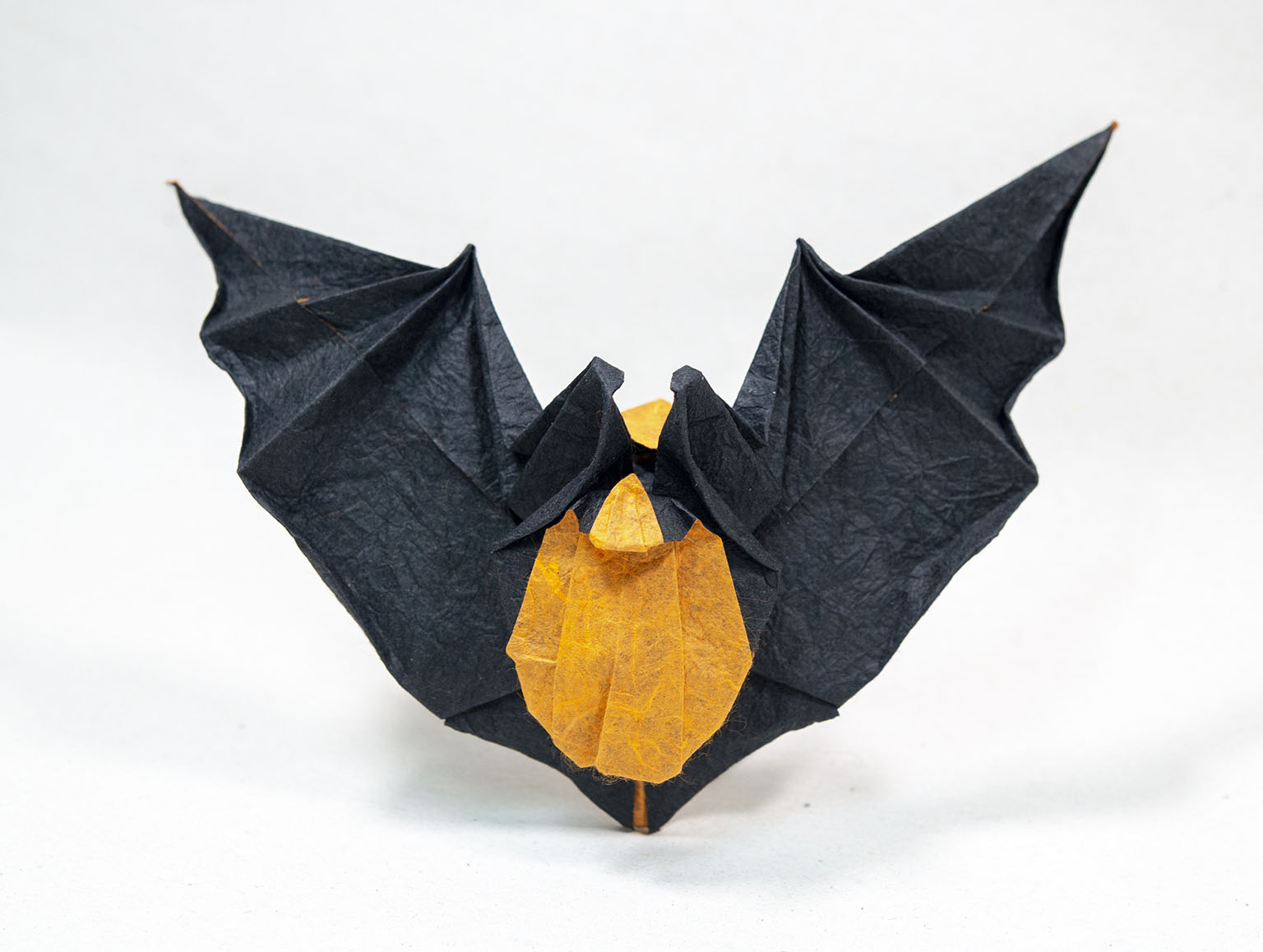 You’ll start from a bird base, and if you are not slowed down by the color change at step 14 (I did not correctly layer the back of the color change), the folding process goes perfectly smoothly. Limet emphasizes his desire to create a true representation of a certain species of bat, and with the four corners of the bird base, he manages to do exactly that. 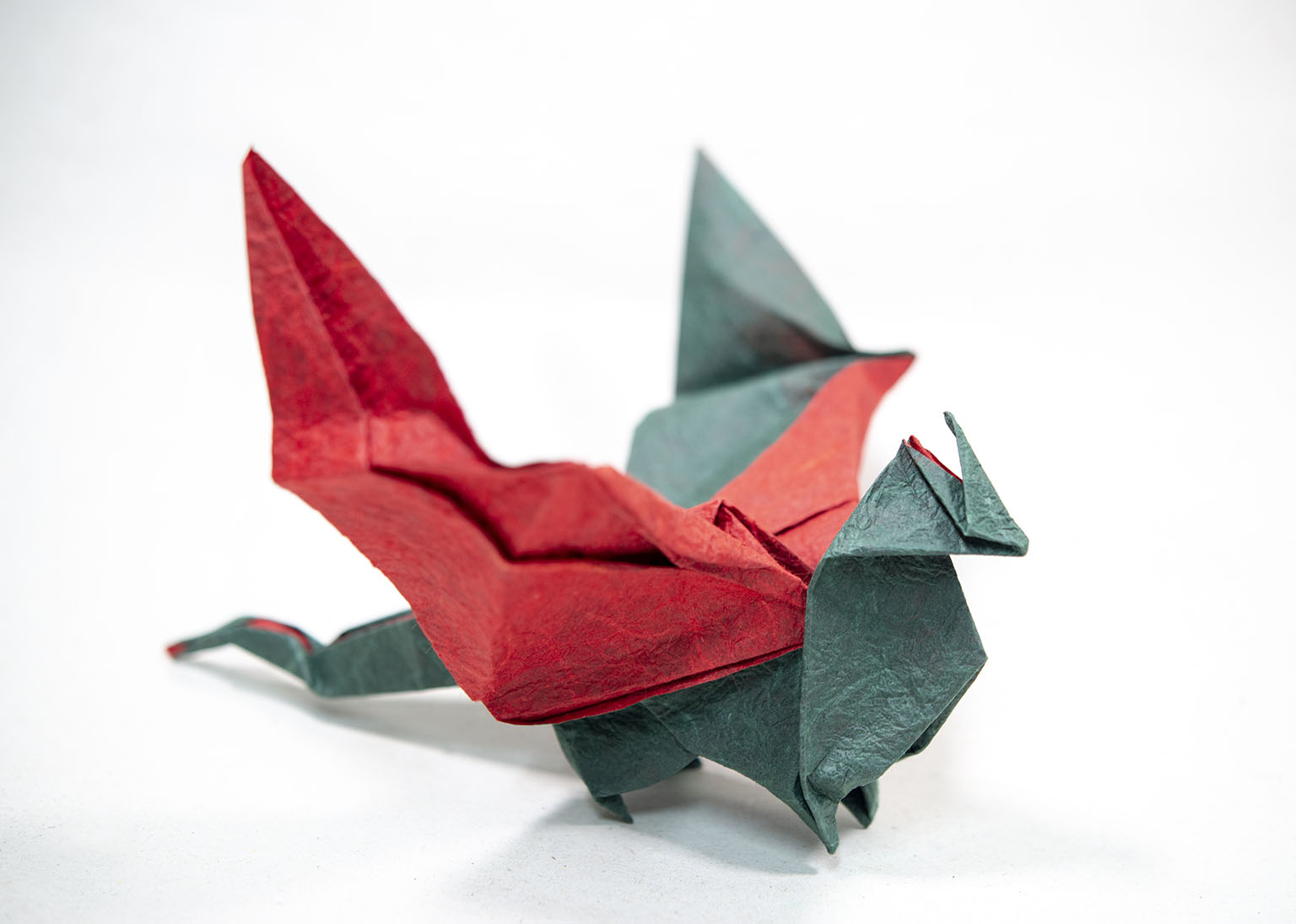 Dragon, duo Thai. I love the color change in the wings, but where is the fire?

Although it is not a paper the book recommends, I use duo Thai in a red-green combination.

This model was a joy to fold. On the way, the author gives us a chance to skip all the detailed steps for the collapse (step 13-19). Although this model did not start from a traditional base, it maintains the elegant simplicity theme.

The shaping is minimal. Nothing on the tail, the head is just a petal fold on the original paper corner, and the legs are rabbit-ears. This only enhances the beauty of the final result.

You have to try these models to be convinced that you can do them at all and complete them in so few steps. They look far more complicated than they are, maybe because you only imagine — rather than fold — the parts of the frog’s body hidden behind the leaf, for example. 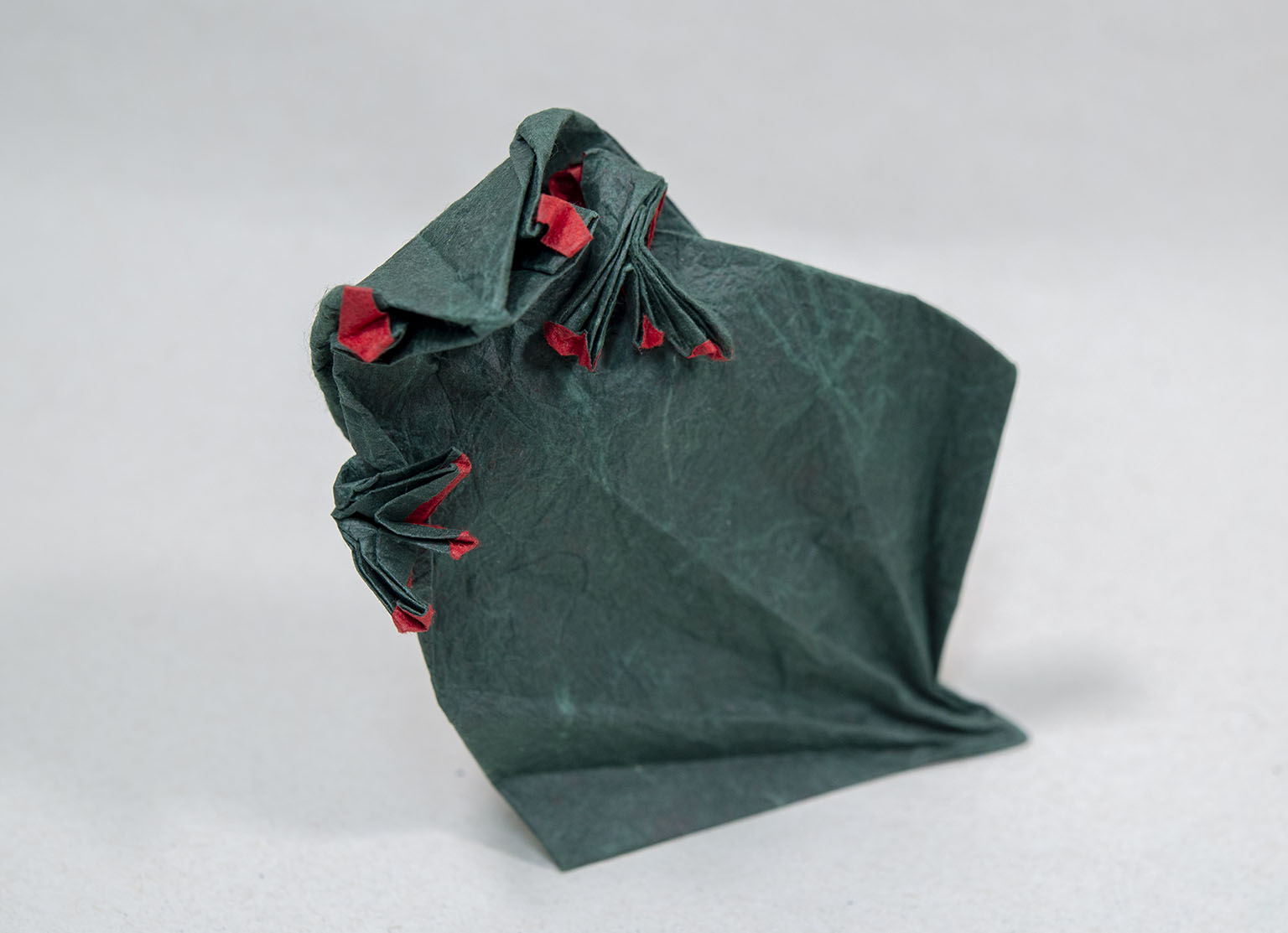 This is a model I wanted to fold for a long while but never dared to as it seemed out of my comfort zone. Going through the steps without folding (I usually do that to get a feel for the model before I start to fold it), this model seemed mysteriously simple.

Folding it, you realize it is simple.

There is a catch, as the final result is highly dependent on accuracy through all the processes as well as the ability to create the finishing touches, which I am not very good at. Forcing the paper to stay in place takes time and skill, but when it is done, nothing can beat the sense of achievement. 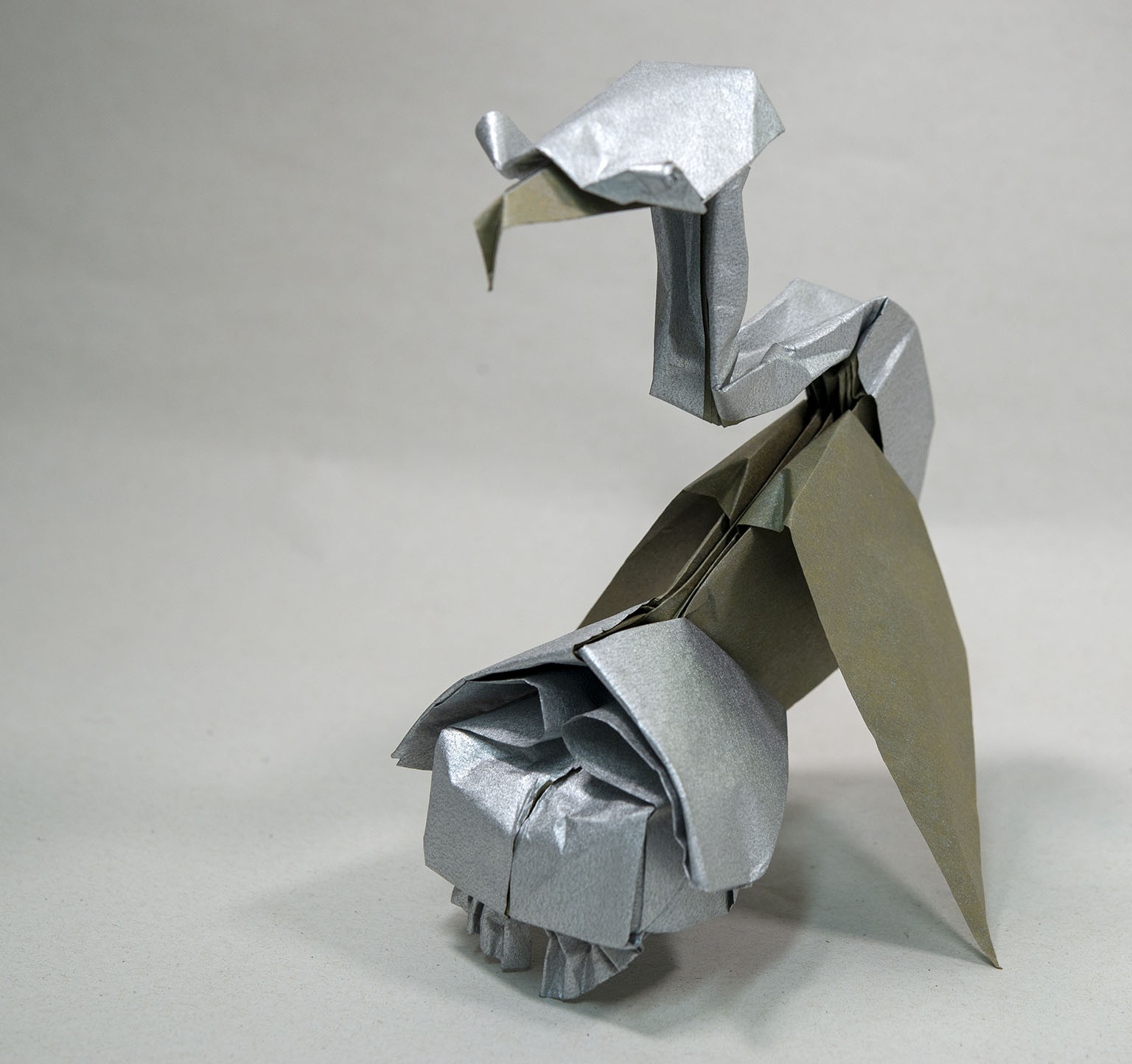 Man Versus Wild, Terry’s tissue foil. I love models that it tell a story.

The man can deliver. Yes, there is a gap between my final result and the beautiful illustration in the book, but this is only because of my skill and paper choice. I am sure I can make it better next time.

This was not an easy model to make. The four color-change steps are not easy to understand, and I even made a mistake open-sinking what should have been a closed sink. Luckily, it didn’t affect the completed model.

Act 2: The Sense of Sharing

See the Bumblebee diagrams at the end of the review to get a feel for this category.

Have you ever thought about the future of origami?

For me, the major task for all new (and old) artists is to break the barrier between fine art and folded paper by bringing expressions, feelings and storytelling into the equation. I feel this book is taking an important leap in this direction.

This book provides wonderful ideas that make you think. It plays with your senses, tricking you to see the complete (but not actually folded) puppy inside the box, and makes you smile with the right title.

The 2-in-1 act is my favorite, as each model tells an original story, a rare commodity in the world of replicas.

The models are beautiful and clever, and the folding processes are balanced perfectly between length, difficulty level and a sense of challenge.

The data provided is complete and helpful, from paper type (and its size) to a crease pattern with the ratio of the final model next to it. The diagrams are clear and precise with just a few minor mistakes. 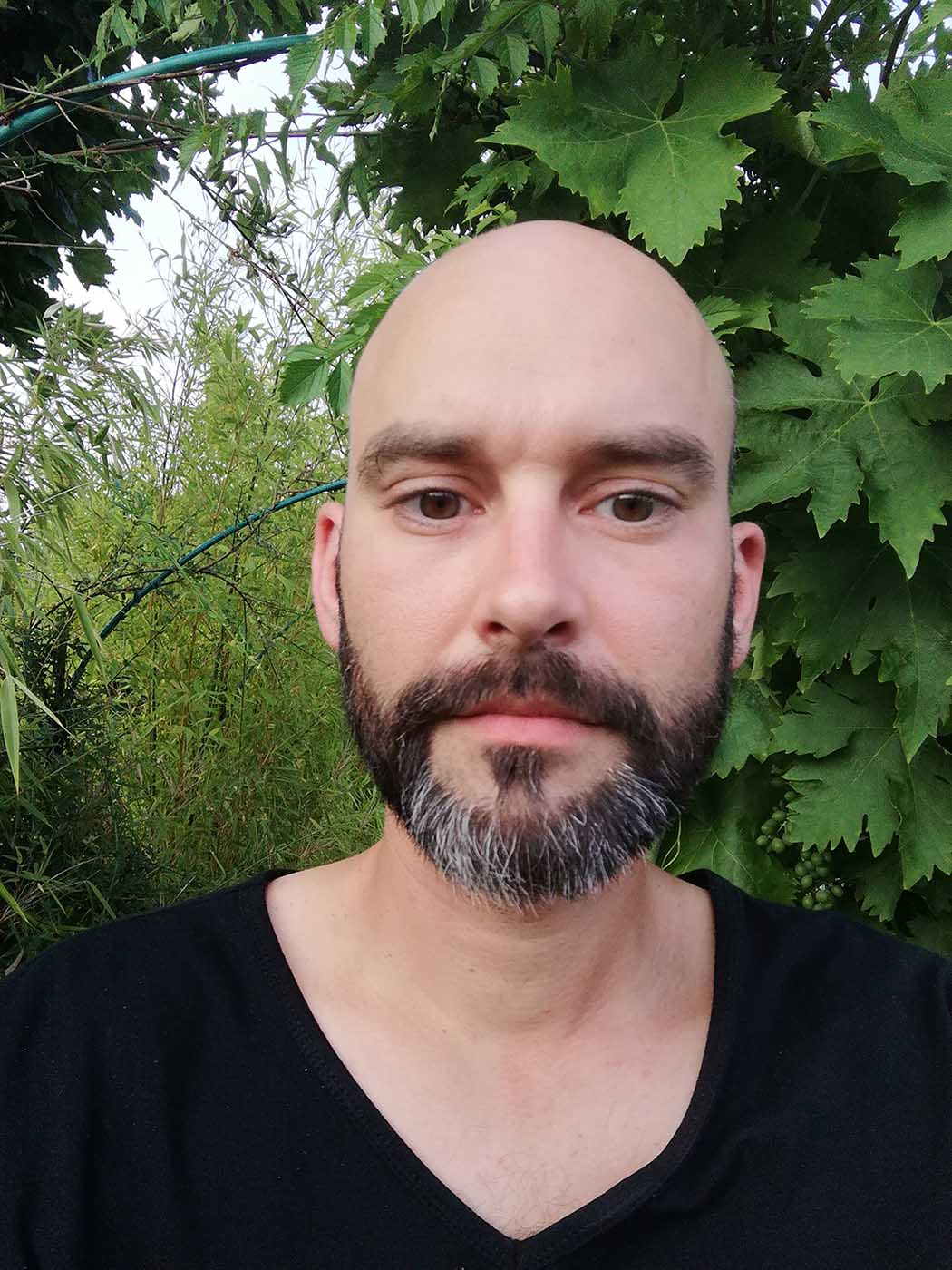 A It is a summary of 10 years of creation and experimentation around origami as an artistic medium that carries messages. It is also feedback on my creative process and my artistic evolution with a background of personal therapy.

But above all, it is the adventure of a bunch of friends including Jean-Noël who has done a remarkable job over the past three years to draw the diagrams and make the layout of the book.

A It’s difficult to choose. I love them all. Both the hidden praying mantis, which is part of the origins, and my 2D cat, which is an artistic achievement in itself. ...

No, I think I would choose the little bees, which are very fun to fold and which represent the cooperation that operated on this book. (These bees are a request from Jean-Noël.)

A It is certainly the Last Temptation, the snake in the skull, the sequence of folds remains quite classic, but it is the shaping, which requires a lot of modeling, and finding the right balance between a thick paper for the skull and a paper that will be twisted for the snake.

A It was the human adventure with these people who supported and accompanied me in this project. For the past two years, we had a discussion group to discuss progress, and we sent each other messages almost daily. I think we created even more links.

Q What was left out of this book and why?

A My series of riders (Look Forward, Berkutchi, etc.) did not necessarily correspond to the aesthetics of the book and to the theme that we had chosen.

Lastly, here is a taste from the book: the diagrams of the Bumblebee. Try your hand at it! 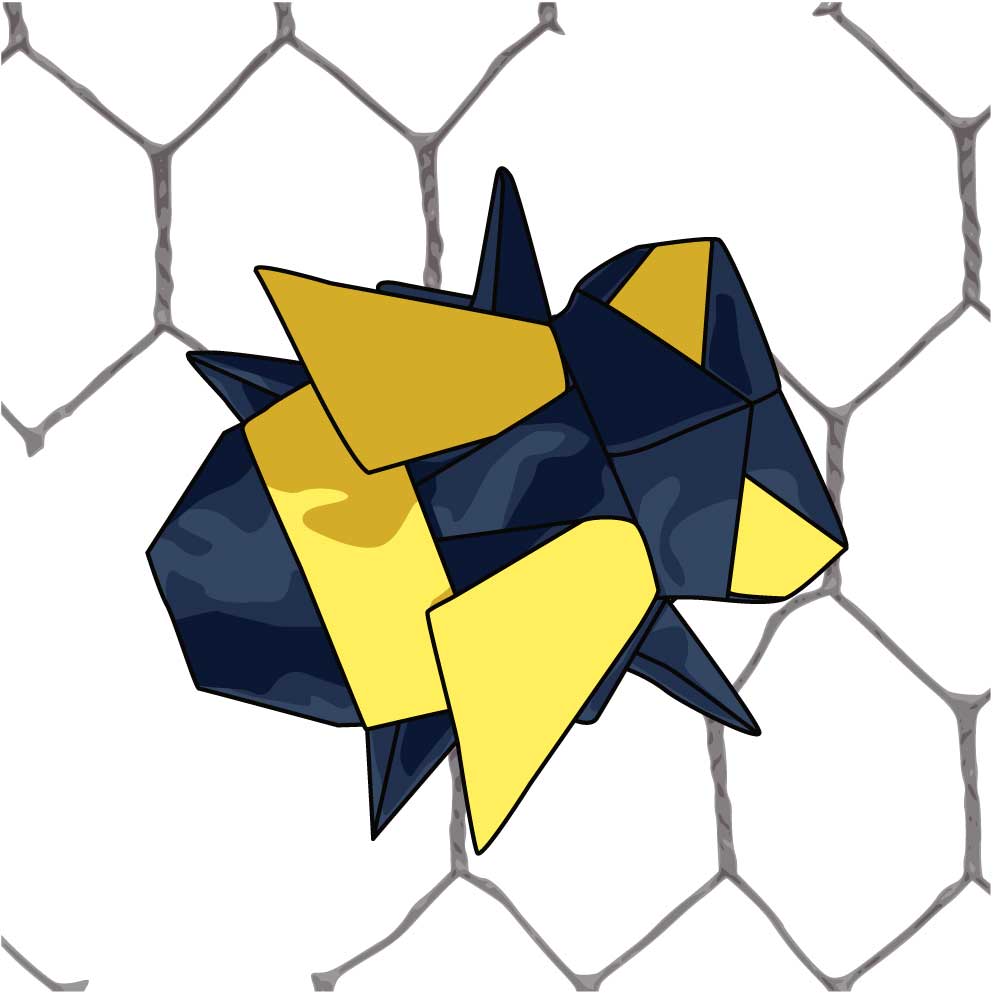 Correction: The article, as originally published, indicated that Jane Rosemarin was the primary editor. In fact Scott Summers served in this role.