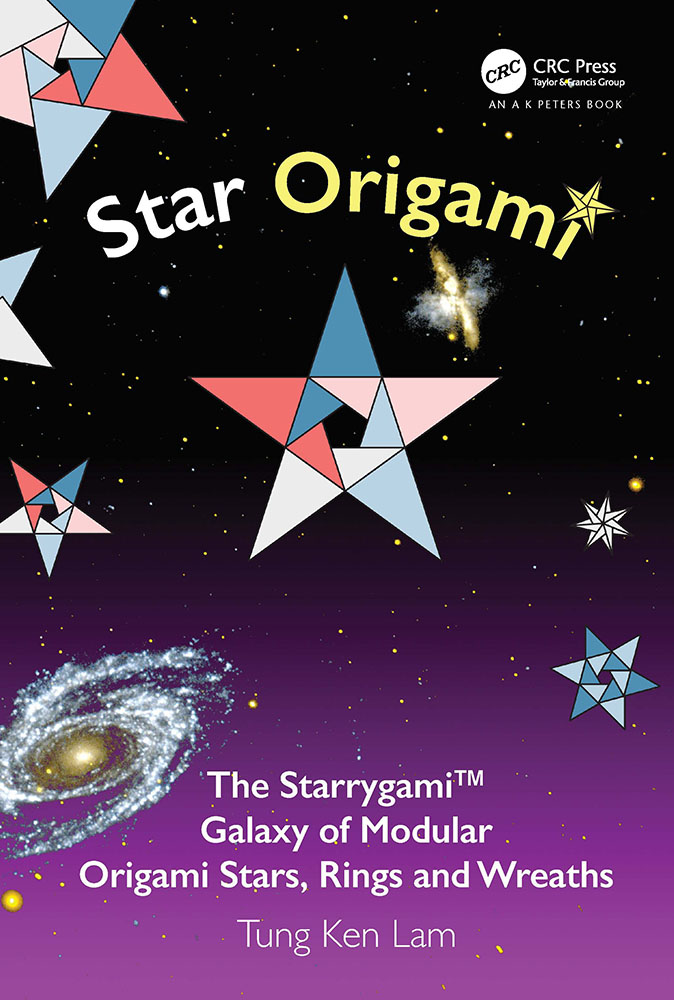 I am happy to say that I have known of “Star Origami: The Starrygami Galaxy of Modular Origami Stars, Rings and Wreaths” since it was an idea described in a two-page document. I was asked by the publisher, CRC, to evaluate the book after reading the proposal the author submitted.

It is hard to see a future book from just two pages, but the table of contents promised a whole chapter dedicated to sliders, which is a favorite genre of mine, so my final word was highly positive.

Now, about a year later, I have had a chance to see if my prophecies were correct by holding the book and folding some examples.

This is not your typical origami book. More than half of it is not about the models, themselves, but about everything around them. Paper sizes and shapes are given a chapter that discusses special results you can get with certain rectangles like the silver or golden ones.

Another chapter talks about the generalization of the process to create stars. I love this part, since you get a deeper understanding of the creation process of the author. Sections like this can push readers to start to create their own models. Even more important is the section for teachers, with its many tips and subjects to teach in class while using the models in the book. This makes the book a valuable asset.

The models are grouped into five chapters, each of which is dedicated to a separate subject: ring stars, wreaths, stars, sliders and 3D stars.

Editor’s note: Diagrams for Swirl 10 are available at the end of this article, and links to two other diagrams are found in the interview section.

Diagrams were made by the author.

In general, they are concise. The symbols are mostly standard and easy to understand. Most of the models are simple, short, and do not waste paper, meaning the shrinkage ratio between the starting size of the paper and the finished model is low. The diagrams are set in a grid, usually with six steps to fold a module. The longest unit, the WXYZ model, is 16 steps.

Assembly instructions show how to connect three units, no more. That is true also for the 3D chapter. This should be enough, except that some novice folders might find it difficult to add the last unit and connect it to the first one, and there is no supporting text for that.

For illustrations, the author uses two colors throughout most of the book. For the 3D models, he added a third unit in gray to help the reader distinguish each module. Although gray is boring to the eyes, it is more than enough to distinguish between the units for the assembly. 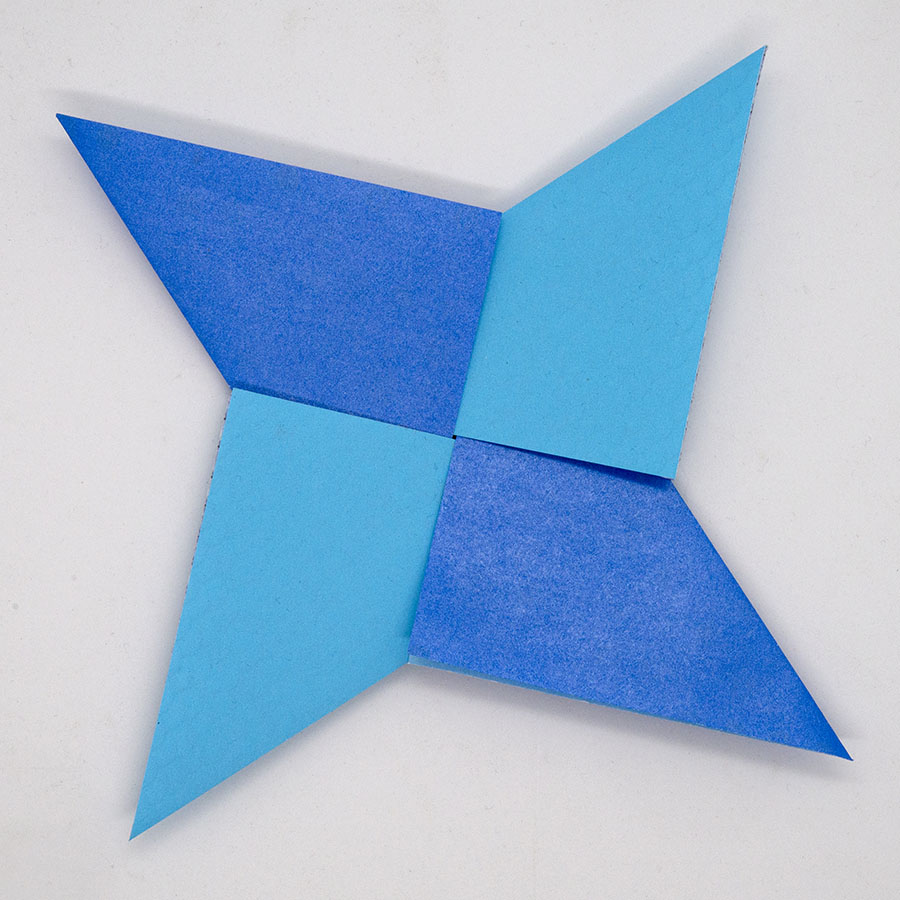 Simple, yet effective. All models folded and photographed by Ilan Garibi.

This is the first model in the book. It uses a silver rectangle. It asks for four creases only, and three steps for assembly.

I was quite surprised to see how good the lock is and how the units hold together strongly. This is a simple star, though, so I won’t fold it again anytime soon, but it surely can fit in a workshop for beginners. 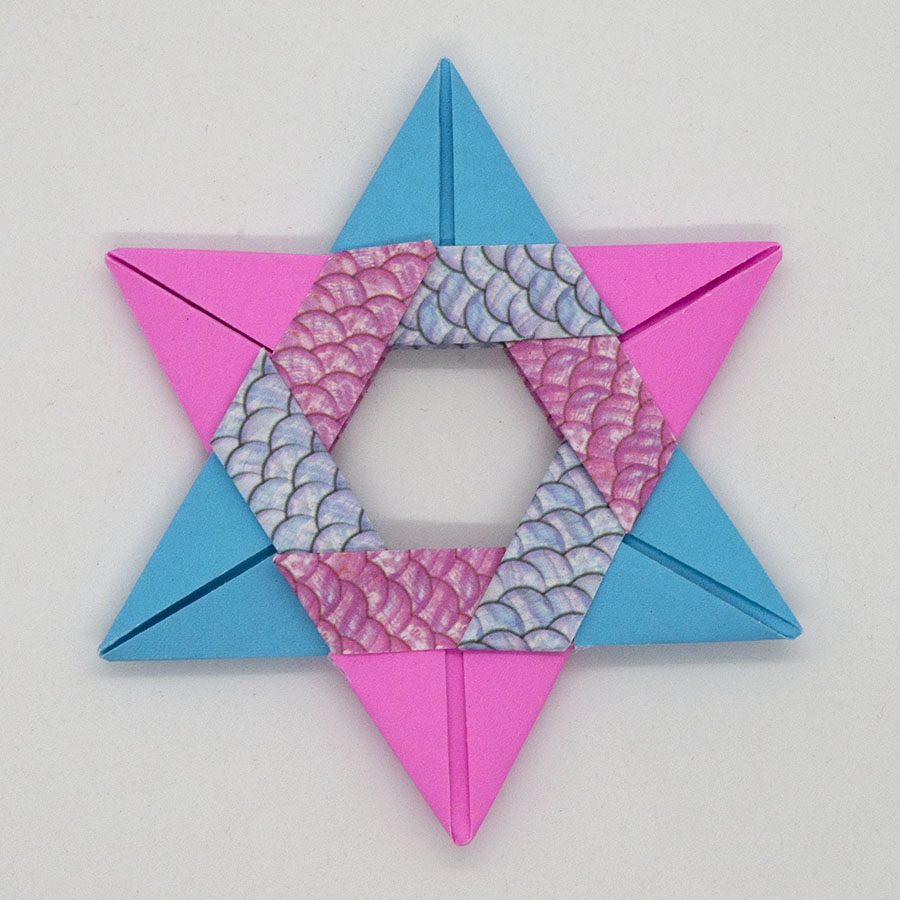 Made from six bronze rectangles, this model is highly pleasing. I like the way it looks and the fact that it is the same on both sides.

Again, six steps to fold and three to assemble, strong connection, and a good-looking model. We don’t need more than that. 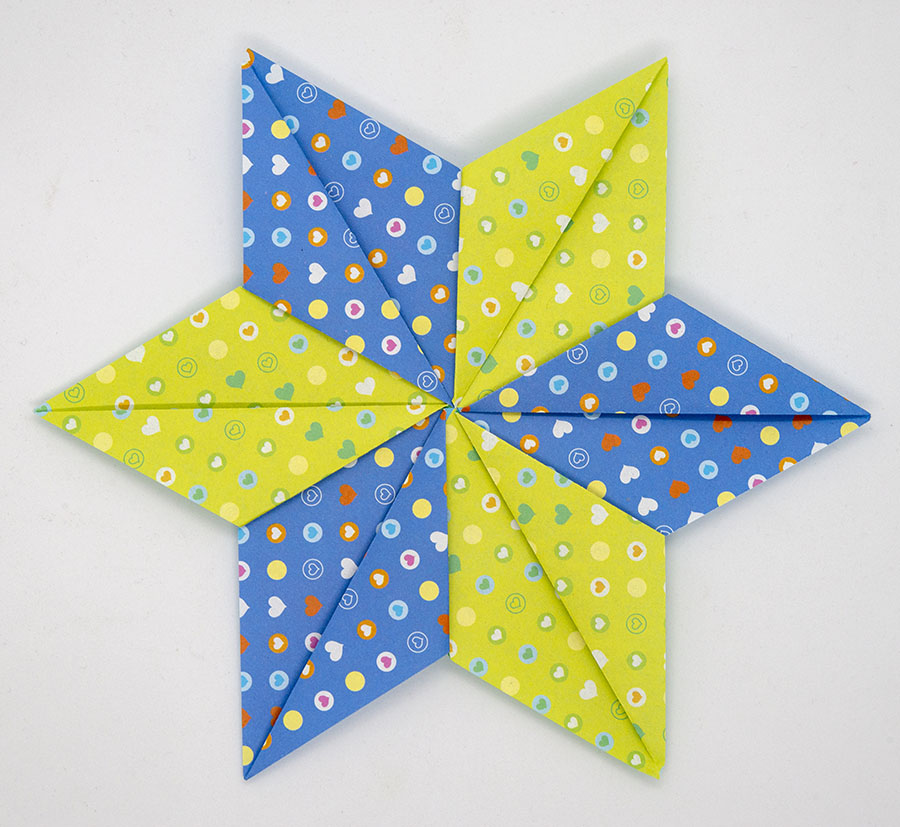 The starting point is a square, and within eight steps the module is ready. Assembly asks for three steps only.

The model has high efficiency, so you can start with a small paper and get a fairly big star. The connection seems flimsy, using a short end of a corner, but when the six flaps are tucked in, the model is stable enough. 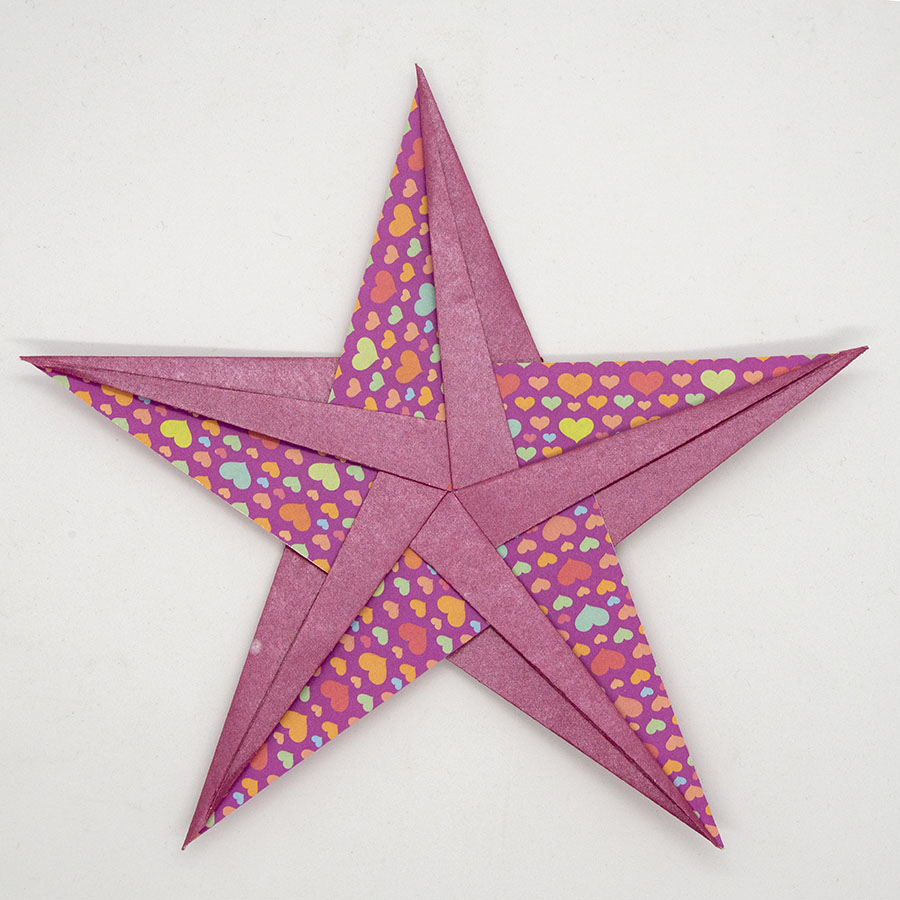 A surprising result from a simple module.

From five units, each starting from a square.

The first four steps serve to create a reference point, so if you make a template, the unit asks for three crease lines only. Quite amazing!

The connection is flimsy, based on a tiny flap to lock two units together. But still, the full star holds together well.

Eight steps, each simple enough, suffice for this model.

The assembly is a little more complex than before, with four steps. Don’t get me wrong; the assembly is simple, as this extra step doesn’t really change it. 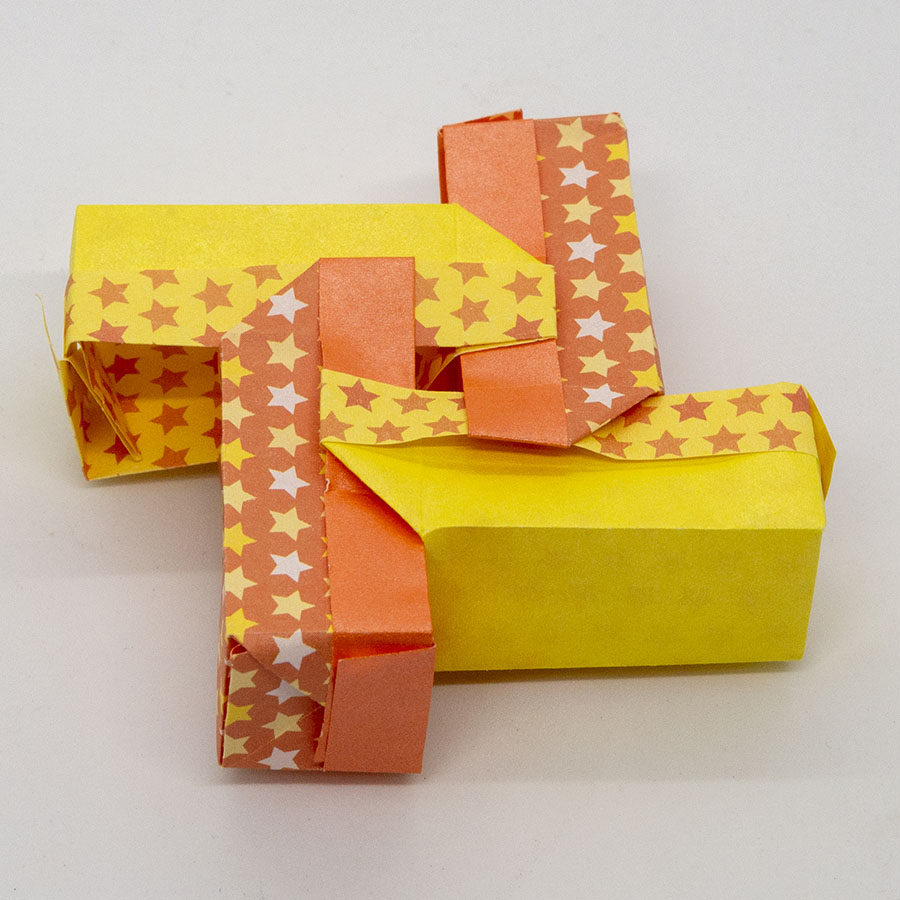 This is the only model I was not satisfied with since the sliding mechanism didn’t work.

I probably chose the wrong paper and had to be less accurate in my folding. Following the instructions to the letter, the tabs that lock a unit to the next are too short and create too much pressure on it, so it’s hard to slide one piece on top of another.

In every book, we look for something unique, something that draws our attention or gives us some added value beyond only the models.

This book is surprising in a few aspects.

First, the extra material around the models is huge.

The author even went far and wrote code lines for Turtle-Graphic on a PC so the reader can create the polygons he is talking about. The first 40 pages have many gems and a lot of relevant knowledge to help the casual folder learn the deeper secrets of model creation or the students in a class to learn the mathematical features hidden in a sheet of paper.

I must recommend the “Note for Teachers” chapter. It is highly useful for making sure the class will succeed in folding the models and learning relevant aspects from the geometric domain.

Bottom line: Highly recommended for teachers and for folders who want more than a few more models!

A I am an origami creator, teacher and author best-known for creating the models WXYZ (PDF download) and Jitterbug (PDF download). My previous books are “Action Modular Origami to Intrigue and Delight” (Tarquin, 2018) and “Learning Mathematics with Origami,” co-authored with Sue Pope (Association of Teachers of Mathematics, 2016).

I have been folding since childhood. Joining the British Origami Society in the mid-1980s expanded my horizons. Eric Kenneway’s “Complete Origami” was a revelation: Paper folding could be much more than “just folding paper.” Kunihiko Kasahara’s “Origami Omnibus” and “Origami for the Connoisseur” were inspirational.

I have always thought that paper folders should create their own work as well as making the work created by others. I favor geometrical subjects but I also make some figurative models. The reason is probably that geometric work is not affected by issues of realism. Instead, the focus is on the folding sequence (interesting and surprising), efficiency (minimizing hidden paper, or maximizing the output for the given input), effectiveness (final result) and elegance (good distribution of paper layers, for example, not too thick). I have been a secondary school teacher of mathematics, where origami has clear educational purposes.

Q What is the essence of the book? (What makes it stand out, who was your target audience, etc.?)

A “Star Origami” is aimed at modular origami enthusiasts, fans of geometry, and crafters who like elegant and decorative origami with a mathematical flavor. Teachers of mathematics and crafts will find practical and theoretical material to use with learners.

The book gives instructions for over 60 modular stars, rings and wreaths. Most are flat (2D), but a few are 3D. Almost all are simple to make and assemble.

The feature that makes this book stand out is that it explains the geometry used in the models so that readers can create their own stars. Other books tend to present the models without explaining why particular folds and location points are used. No advanced mathematics is needed, only elementary trigonometry and Pythagoras’ theorem. Another feature is that the names of the models are descriptive so that readers can understand the relationships between the models.

A The book has more than 60 models, so choosing just one is hard. I’d choose Octagram Slider as an action model that is quick to make. The action is smooth, but the model is secure. The unit uses just four valley and mountain folds. From this model, many variations and new models can be made.

Some readers might only want to make the origami models in the book and not worry about the geometry. However, I feel that they will become motivated by how a few simple changes can make such a variety of models.

A Blintz Icosidodecahedron has a simple unit but the assembly can be hard to finish. You can use a nail file or a toothpick to put the flaps into the pockets.

In terms of folding, most models are simple to make with a few intermediate-level units, for example, Kite Wheel 10.

A The most enjoyable part of any book is clarifying one’s thoughts and arranging them to make sense to other people. This includes creating good folding sequences, researching and summarizing mathematical and origami findings and finding connections between apparently unrelated models.

Another task is graphic design, which means solving visual problems: Good solutions can be satisfying.

The simplicity and elegance of Paolo Bascetta’s “Girandola Ottagonale” (Octagonal Wheel) is impressive and rare. [See the article in The Fold.] I hope that my model approaches the elegance of Paolo’s: Both use two-fold units assembled with a third fold. 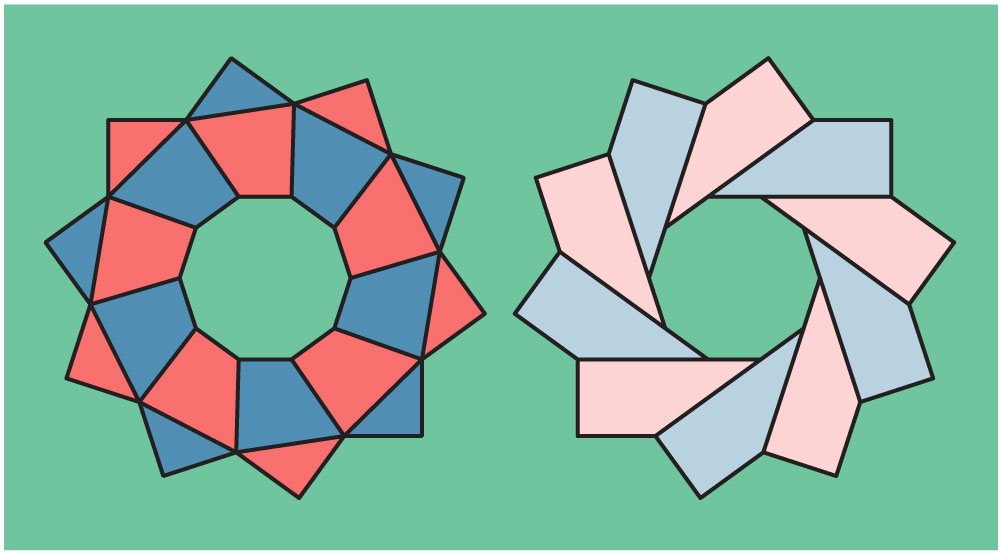