Editors’ Note: This article was collaboratively written by four young origami enthusiasts and edited for clarity by The Fold’s editorial team. The students have a GoFundMe campaign to support a trip to NASA headquarters. More information on this is at the end of the article.

We are Jimmy in the Box, a team of high school and middle school students who enjoy juggling origami and computers. In October 2021, we won a global championship at the 2021 NASA Space Apps Challenge through a project to make origami versions of the James Webb Space Telescope and integrate them with tiny computers called Raspberry Pi. We are excited to be one of 10 global winners (we won in the arts and technology category). Our project was selected from 4,534 teams worldwide (28,286 participants from 162 countries) by NASA as well as space programs from nine other nations.

This article summarizes our journey to reach the pinnacle of an international science and technology event.

Our group came together via the Kids IoT (Internet of Things) program, a local voluntary program for K-12 students who are interested in computers, electronics and coding. The program offers lecture-based classes about Raspberry Pi computers, Python coding and cloud data storage. It also organizes hackathons, where students make and demonstrate self-made and self-programmed devices such as alarm clocks, smart mirrors and sonic pest repellers.

Around the end of summer break in 2021, our coaches suggested that we enter the NASA Space Apps Challenge using what we had learned. The Space Apps Challenge is an annual international two-day event where NASA puts out about 30 challenges for participants (mostly grown-ups) to develop innovative solutions.

When we were choosing a challenge for our project, we found the Webb Origami Design Challenge interesting. The word “origami” caught our attention because we love, and are good at origami. All of us have been folding origami since we were toddlers.

The challenge we chose was to “create origami artwork that looks like the James Webb Space Telescope and showcases Webb as a technological and design marvel using an ‘art-meets-science’ approach.”

We did not know anything about the telescope at first but soon got excited about how it planned to use origamilike folding and unfolding for its launch and deployment. Webb is a space telescope, meaning it is intended to work in outer space. If you have heard of the Hubble Space Telescope, Webb is basically an upgraded version of it.

The following picture shows a full-scale model of the telescope. 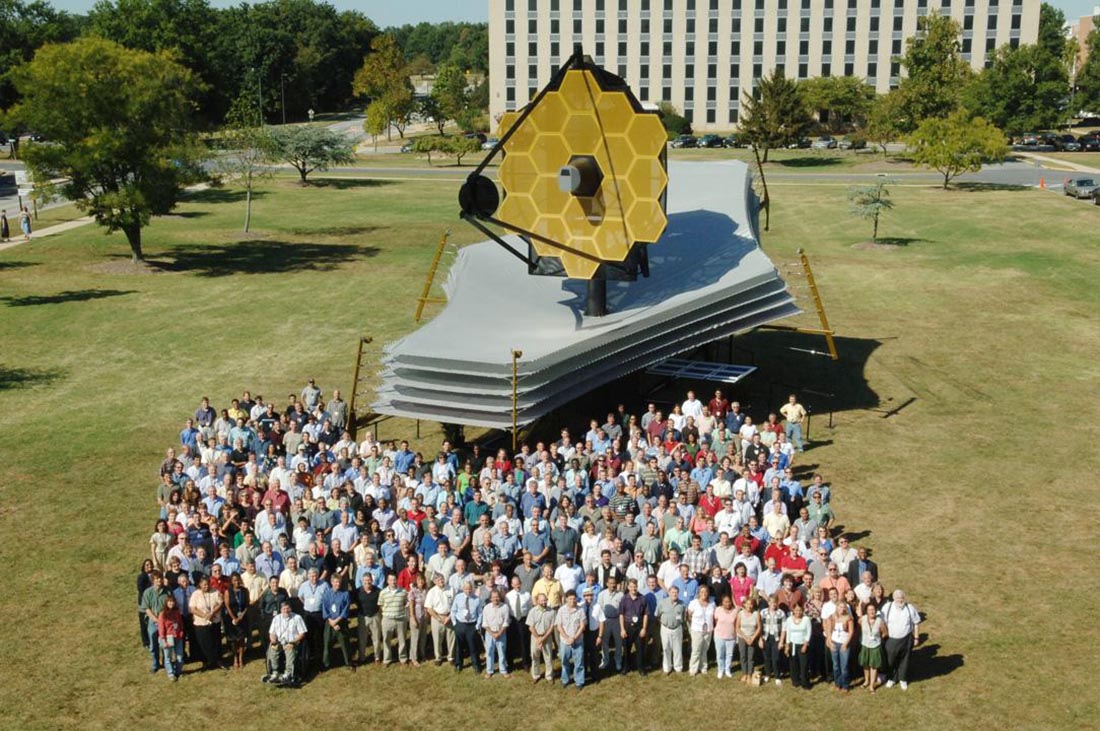 A full-scale model of the Webb telescope. Photo: NASA.

As you can see, it is very big. Its base area is about the size of a tennis court, and its height is about 40 feet — far too big to fit into a rocket. NASA decided to fold it up to reduce its volume and unfold it after it is launched into space. The picture below shows how the telescope was folded and made ready for a launch.

The Webb telescope is folded up to fit into the cargo space of the Ariane 5, a heavy-lift launch vehicle for the European Space Agency. The Webb telescope was launched on Christmas Day, 2021. Photo: NASA/Chris Gunn.

Currently, the JWST has been fully deployed, and the first images are scheduled to be released on July 12, 2022.

This is how we ended up using origami and computers to model the Webb telescope at the NASA Space Apps Challenge in the first weekend of October 2021. Since the telescope’s unfolding process looks like the jack-in-the-box toy, we decided to call our team and project “Jimmy in the Box” after James Webb, a NASA administrator in the 1960s, for whom the telescope is named.

The most eye-catching part of the Webb telescope is the primary mirror. The mirror’s diameter is 21 feet. It is designed to collect light from the objects being observed. It has 19 hexagonal segments. The center segment, in black, is to mount the camera. 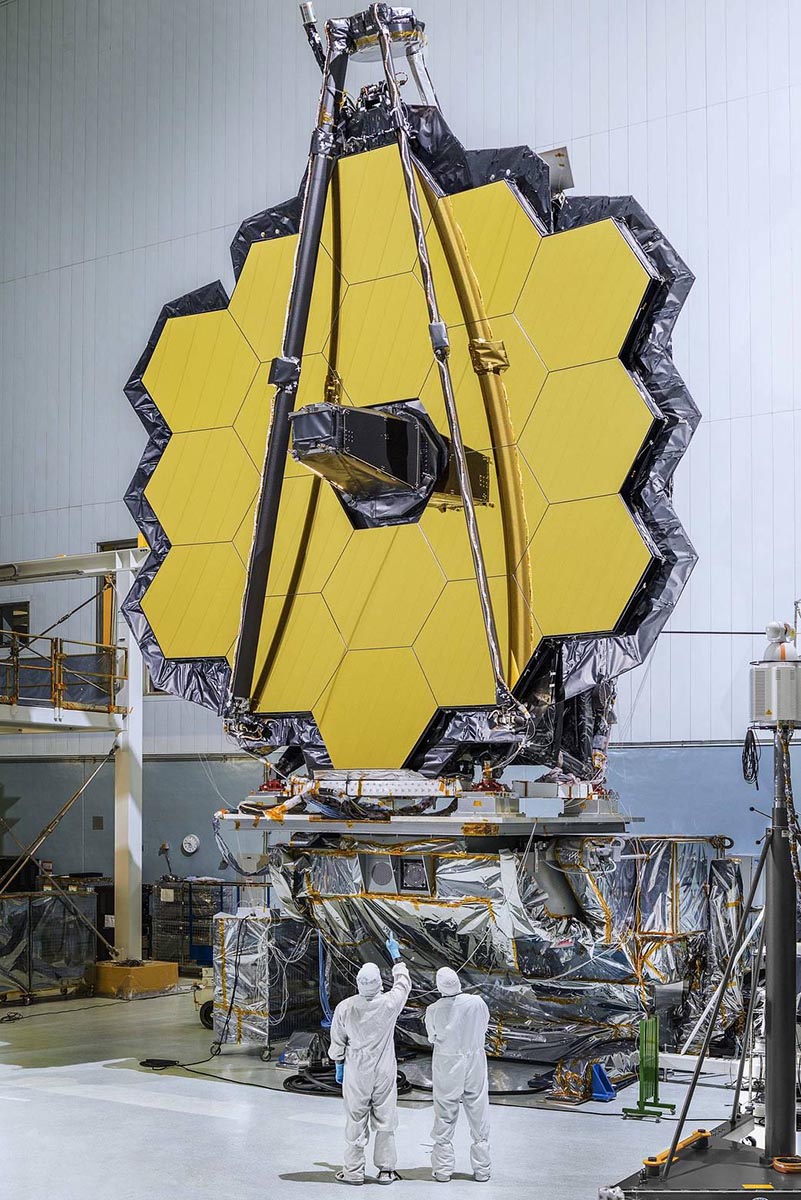 We modeled this mirror with a hexagonal origami tessellation. Tessellation is a tiling technique that repeats geometric patterns on a plane by folding a single sheet of paper. The picture below shows what we folded. 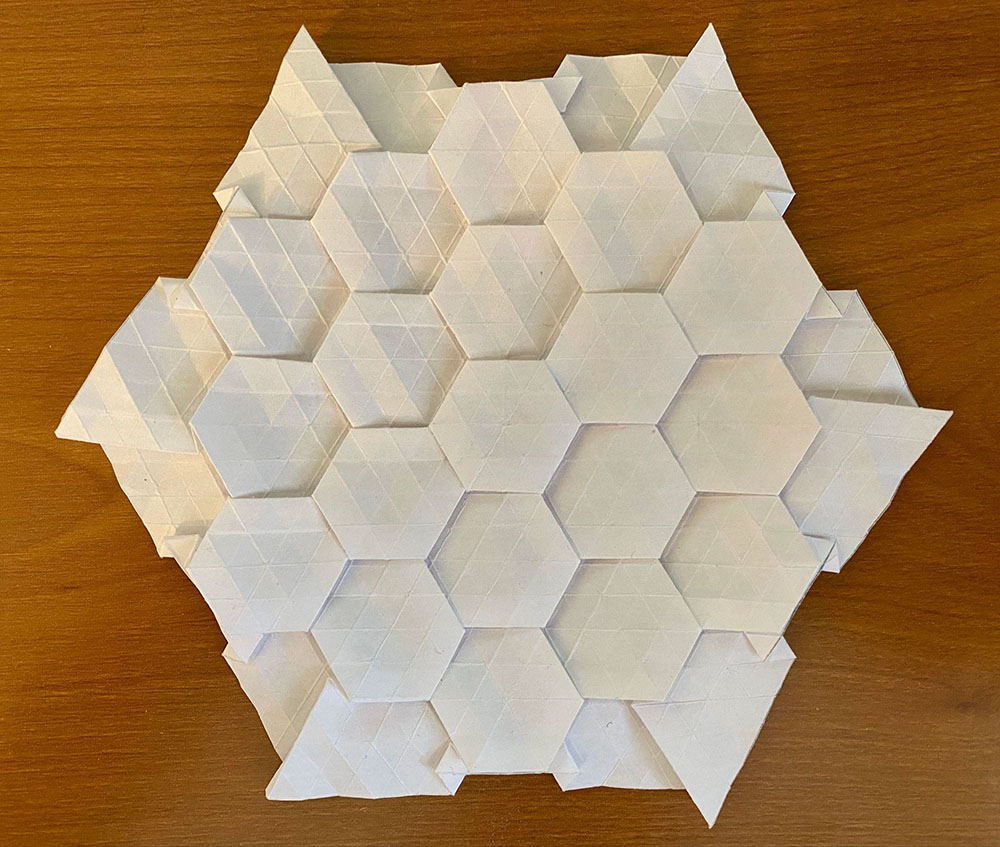 To fold this tessellation, you will need a hexagonal sheet of paper that is precreased with a triangle grid. The grid will be used as a guidance for the placement and orientation of tiled hexagons.

1. Cut out a regular hexagon from a sheet of paper. You may draw it using a compass and following the animated instructions:

A regular hexagon inscribed in a circle. Graphic by Aldoaldoz, CC BY-SA 3.0, via Wikimedia Commons.

Or, follow the instructions by Leyla Torres folding a hexagon from a square.

2. Fold the regular hexagon in halves from point to point, resulting in three diagonal creases. 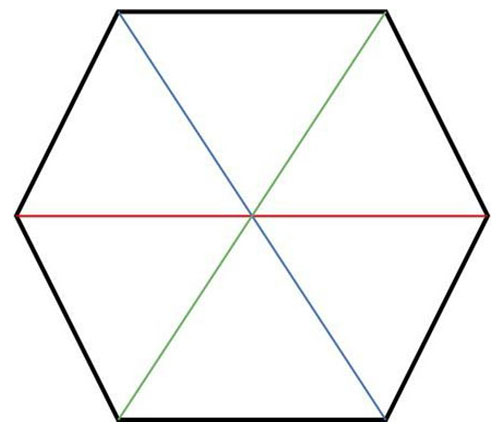 3. Fold each edge to the center. This step gives you a division of four pleats in each direction (parallel to each diagonal). 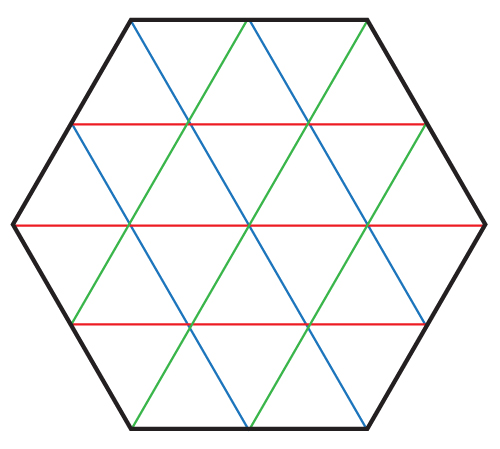 4. Repeat the parallel creases until you have a division of 32 pleats in each direction. 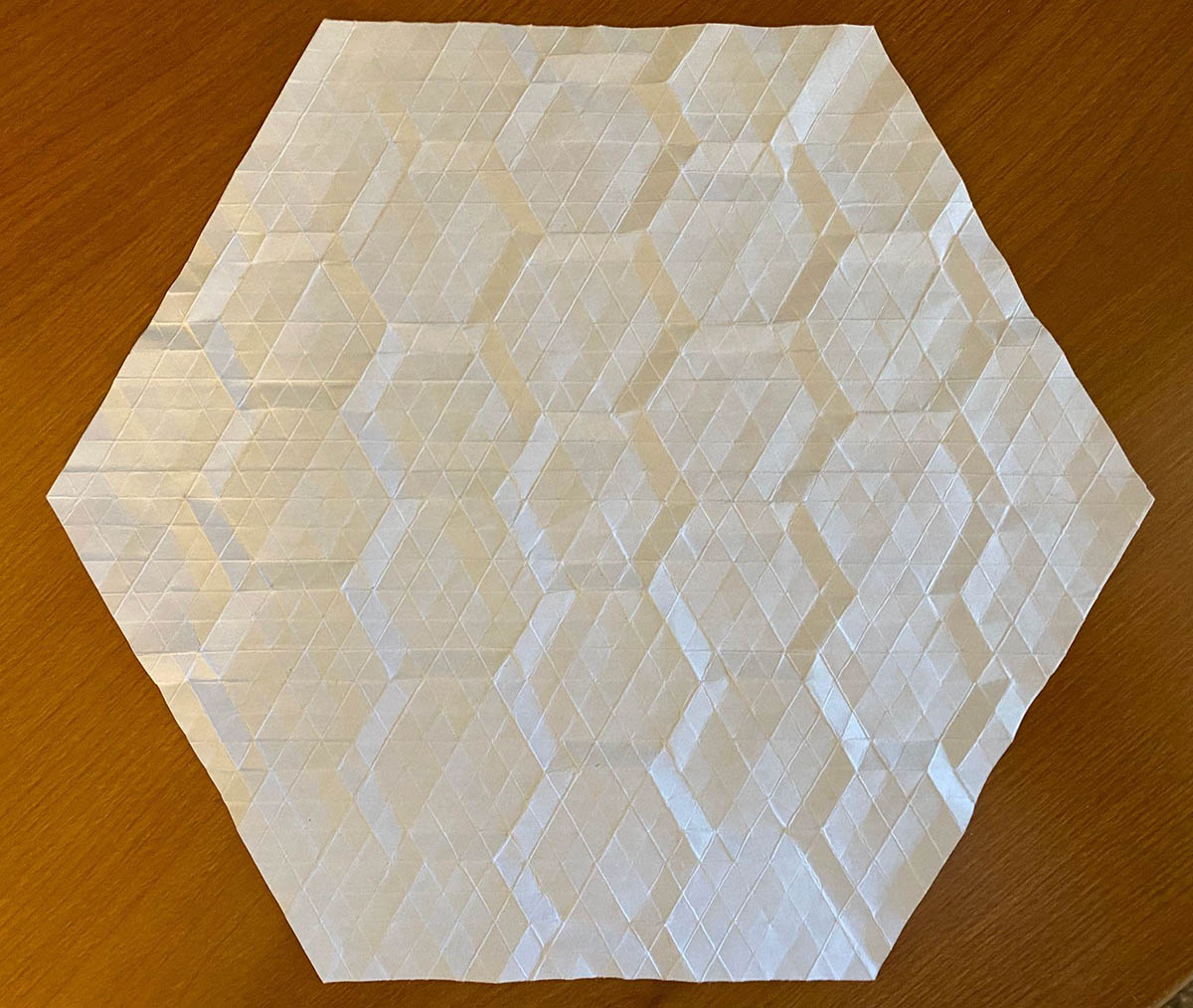 With this pre-creased triangle grid, you are ready to start tiling hexagons.

First, locate the center of the grid and mark out a hexagon around it. The hexagon is four pleats across in all directions. Each of its sides is two triangles long. Then, repeat hexagons of the same size by following the video below. Text-only step-by-step instructions are also available online.

An instructional video for folding the Webb model:

The Webb telescope has a five-layer kite-shaped sunshield. The sunshield’s dimensions are 45 feet by 70 feet, which is similar to the size of a tennis court. It is designed to protect the telescope from warming and light pollution by blocking heat and light from the sun, Earth and moon. 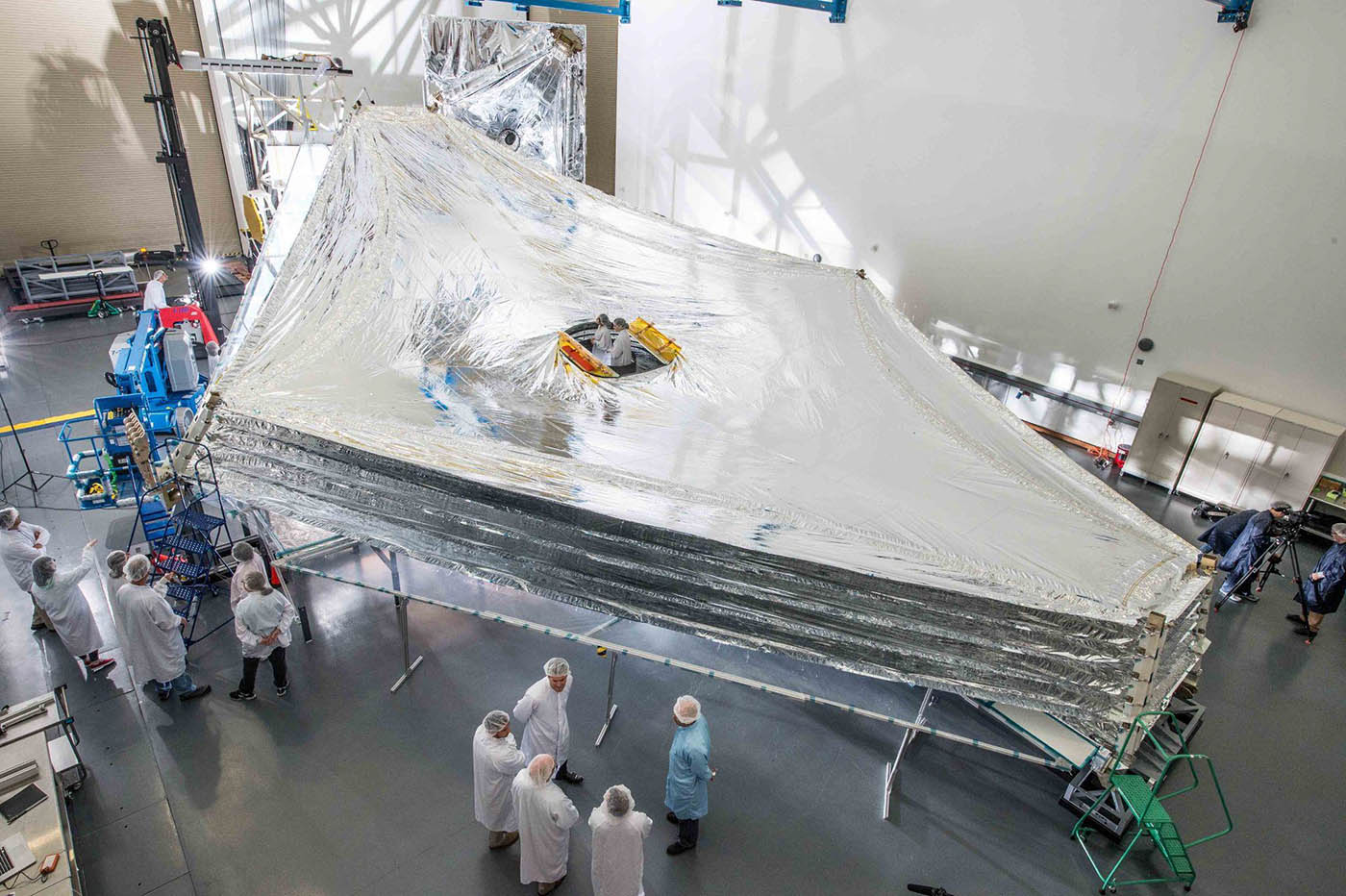 To model this sunshield, we folded a long hexagon from a rectangular sheet of paper and stacked five of them. The five hexagons (in silver) are stacked with two origami springs (in gold). 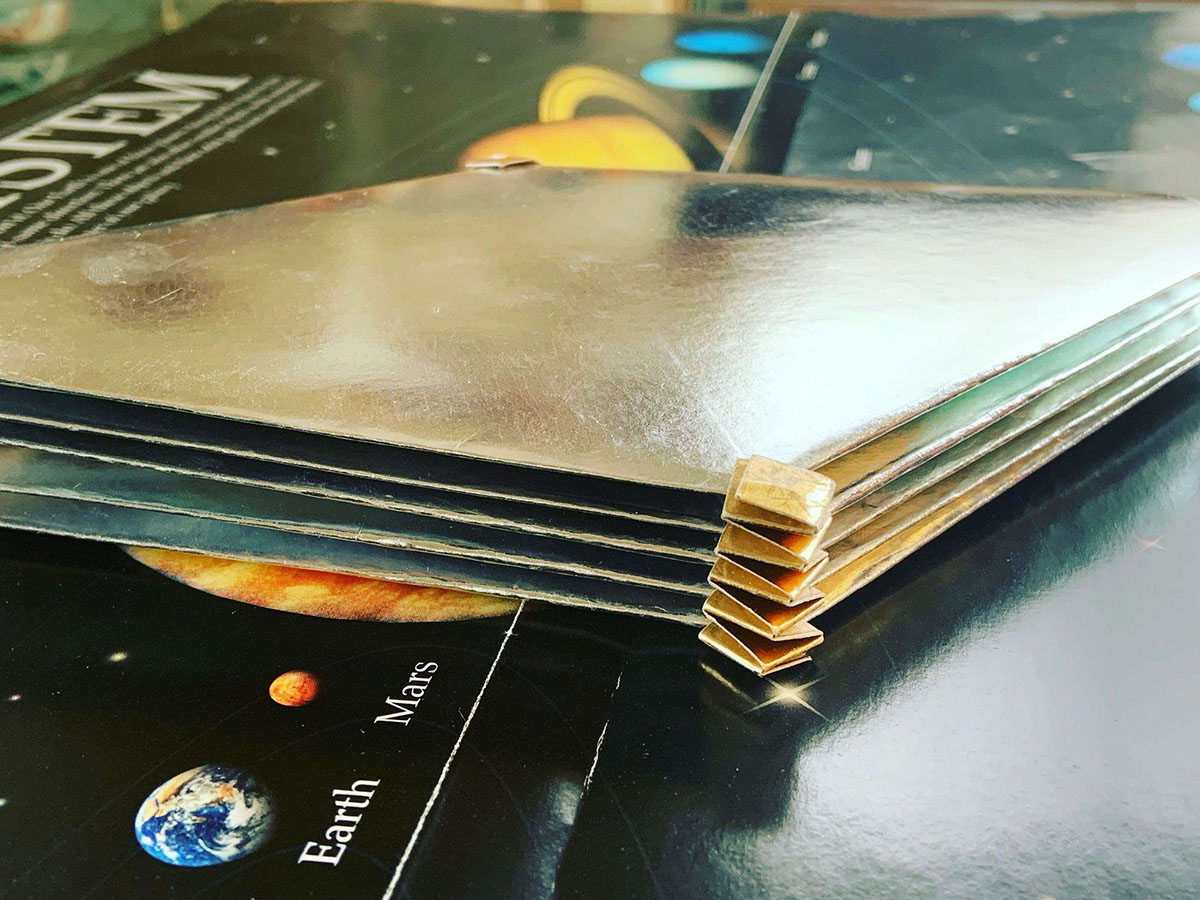 The following video shows how to fold a long hexagon:


The following video shows how to fold a square spring: 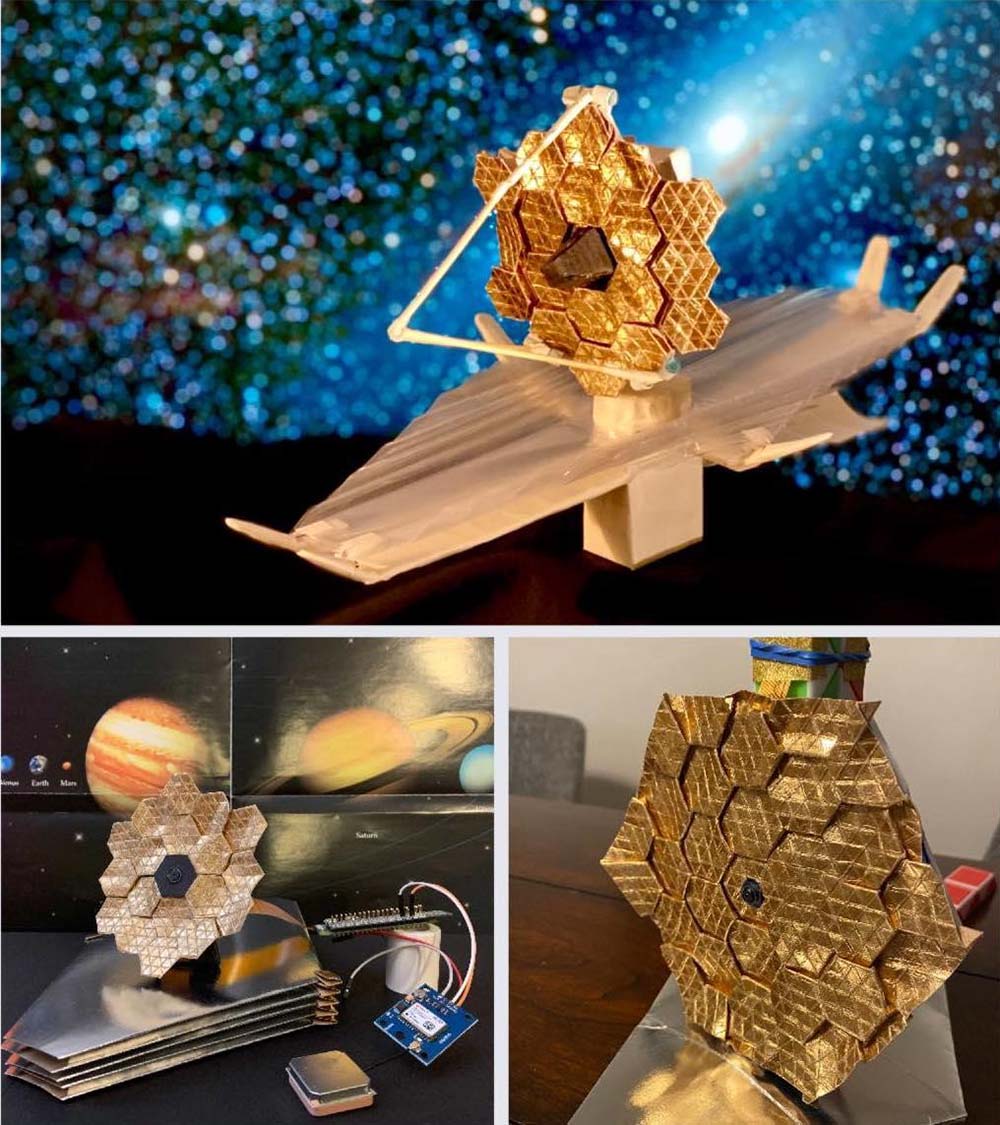 Since we wanted our models to actively do something, we integrated them with Raspberry Pi computers, cameras, GPS receivers and other equipment. A camera is attached at the center of an origami tessellation, and it is connected to a Raspberry Pi. 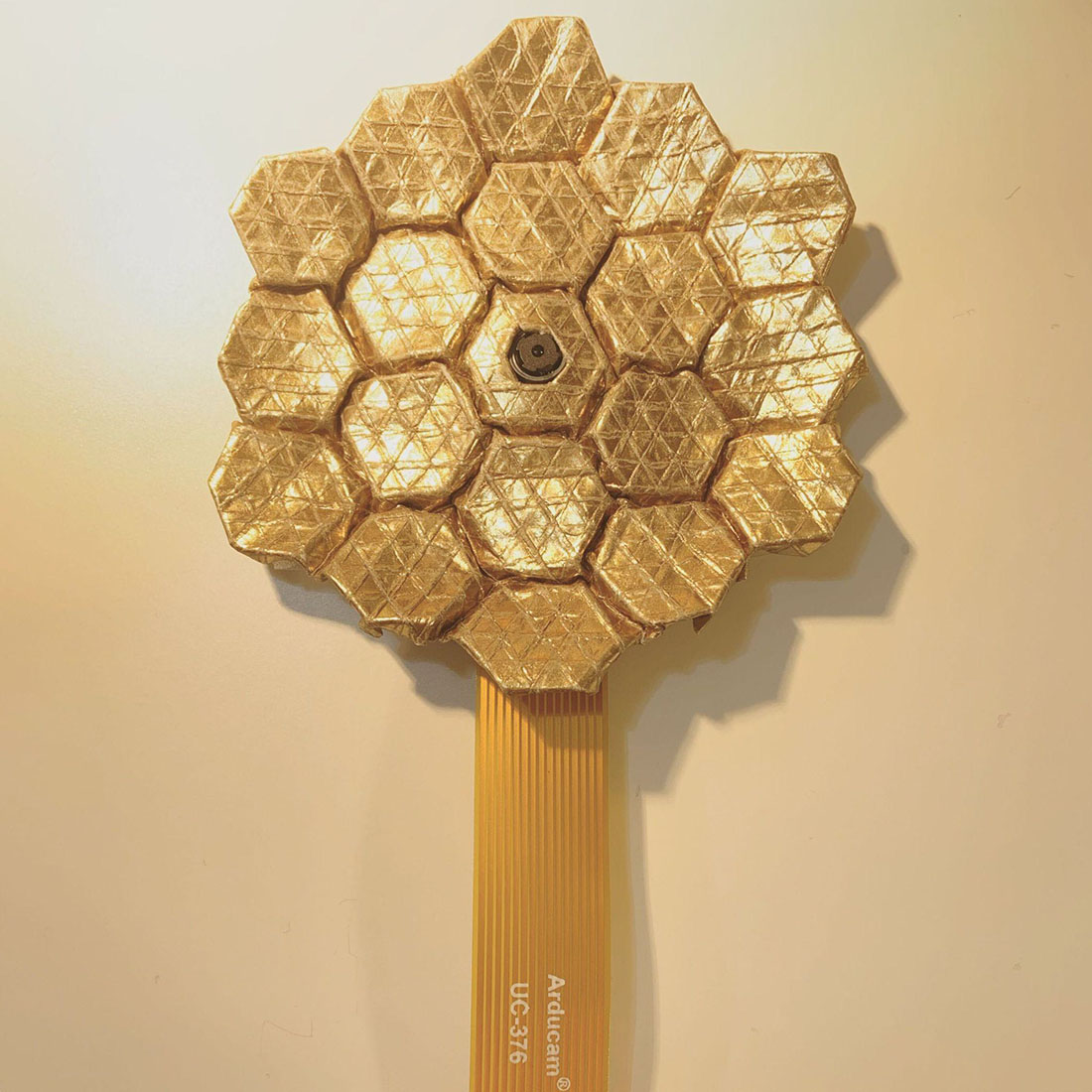 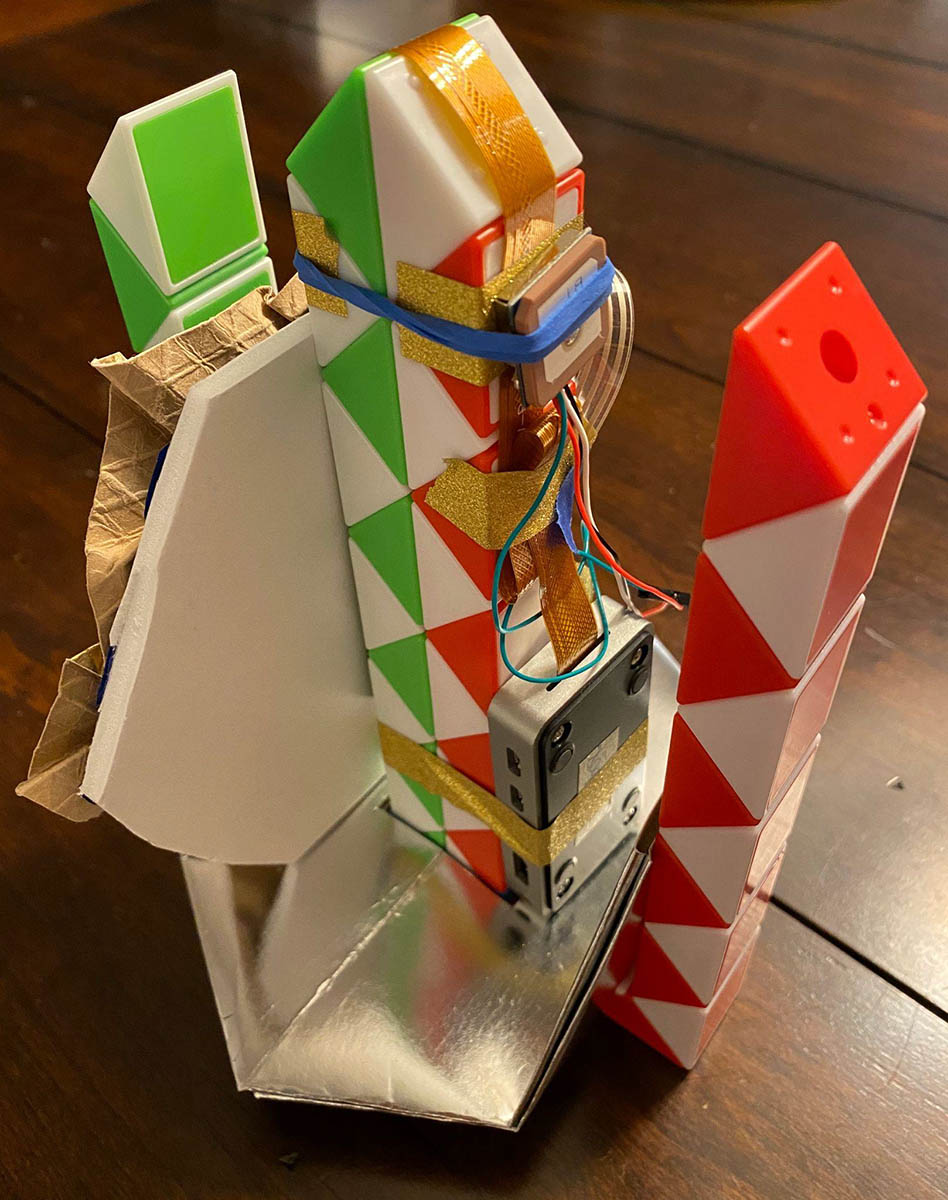 Our goal was to have our models do what the real telescope does: taking pictures, tracking the current position and measuring sunlight intensity and temperature.

It was a lot of fun to fold origami, program computers and learn about the world’s most powerful telescope. You can learn how to reproduce our origami artwork and telescope prototypes at our project web site. Our ultimate goal is to inspire as many people as possible who like arts, technology or both!

This project was fun and rewarding, but we had a few challenges. too. Since the event had a time limit — two days for project work with a specific deadline for outcome submission — it required our intensive commitment. Some of us spent at least eight hours on origami artwork, and others were up until late at night to fix computer troubles. We were very busy until the very last minute, making demonstration videos, completing project materials and rehearsing the project presentation. Another challenge was that we needed to communicate online only (with Zoom and Slack), not in person at all, due to Covid-19 restrictions.

This project led us to wonder what else we could transport to space with origami-inspired techniques. For example, could we send solar panels and other bulky items for future space stations? Possibly a space station itself? Maybe vehicles and housing structures for living on Mars? It is so exciting to see that origami can contribute to science and technology in space!

Lastly, let us announce that our team is currently fundraising to join the “Winners’ Trip,” which NASA organizes for global champion teams to visit their facilities. We want to take advantage of this opportunity to learn more about origami and technology for the future. We are planning to send donors origami gifts as a token of our appreciation (See some samples below.) Help us fly to NASA! 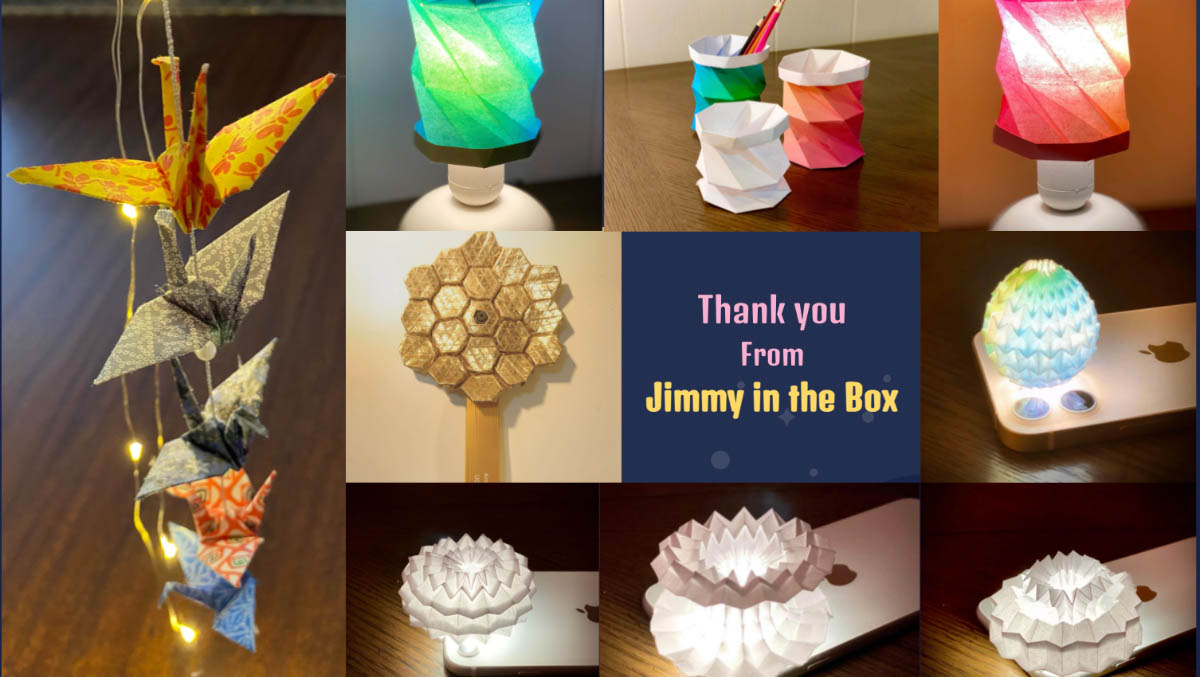 Takeshi Tatsumi is a teenage origami artist. He carries origami papers wherever he goes, takes inspiration from what he sees and what he feels, and gives it shape as paper artwork. Takeshi has made hundreds of paper crafts since he was 3 years old and developed international friendships in the U.S., Canada, and Japan through origami. He served as the lead origami designer for the Jimmy in the Box project. Currently a rising 10th grader, Takeshi has an online gallery to showcase his recent artwork. He also plans his own business to share the joy of paper folding and promote the art of origami.

Hanna Suzuki is a rising seventh grader who loves a fusion of arts and computer programming. She has worked on a summer science project about the Miura fold, which was used to fold and unfold the solar panel of a spacecraft. Hanna is a lifelong camper and micro-hiker on the Appalachian Trail. These days, she is thinking of a potential fusion of outdoor activities and programming. Hanna studies piano at the New England Conservatory and has been invited to Carnegie Hall for her recitals three times.

Yuto Yashiro is a rising sixth grader who loves soccer, video games and reading about the galaxy. His passion for origami was sparked by the Origami Kids Challenge, a fundraising campaign for participants to fold origami cranes — a symbol of hope and healing during challenging times — and help distribute meals to children and families in need. (Sponsors made a cash donation to Feeding America for each crane.) Yuto led a local initiative and contributed about 1,000 meals to the campaign. As a Raspberry Pi enthusiast, he regularly builds Internet of Things devices and occasionally teaches other kids how to use this mini-processor.

Misaki Tatsumi is an experienced paper folder who loves science and technology. While she was in grade 11 during the recently ended academic year, she formed and led the Jimmy in the Box team and oversaw many project phases from doing a survey about the Webb telescope to recording a demonstration video. Misaki carried out a research project last summer to study immersive virtual reality (VR) for the medical field, particularly pediatrics. She reported her work in a refereed publication and presented it at an international research conference. Misaki is a varsity track and field athlete.

This article deserves more attention. It should be released to major news outlets in newspaper, radio and television. Let's spread the word on this wonderful achievement. Congratulations to all the students who worked so hard on the project.