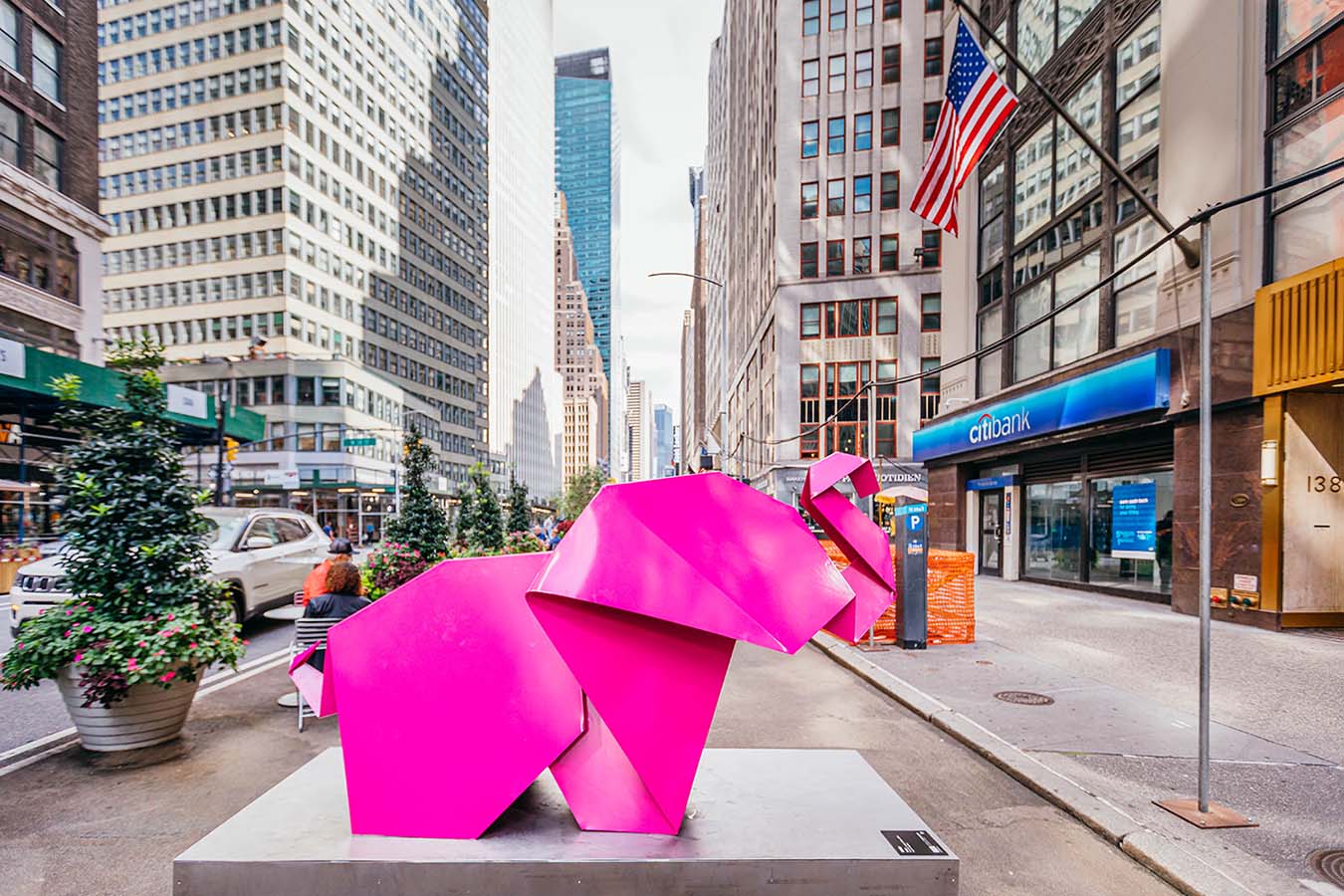 Broadway immediately conjures up images of the theater, or The Theater, and the million bright lights of urban lore. But the theater district is only one of the areas bordered by this notable boulevard. Through most of the the 20th century, Manhattan’s garment district, a bustling industrial area with businesses that ranged from designers and button dealers to loft factories, was also famous. The streets were bursting with life and color, from the very haute couture clothing worn by models dashing along to their next assignment to the factory workers, who pushed racks of clothes down the street from factory to showroom to warehouse. It was like Fashion Week every day.

But New York’s postwar place as the world’s fashion capital was eventually eroded by competition from cheaper labor in other states and other countries. Imports took the place of “made in NYC” (made most often by immigrants), and these industries no longer populated the same amount of real estate that they once did. The Garment District Alliance (GDA) works in and with the broader community to ensure that this area can thrive, a task made more challenging by the pandemic, which has somewhat unpredictable long-term consequences. 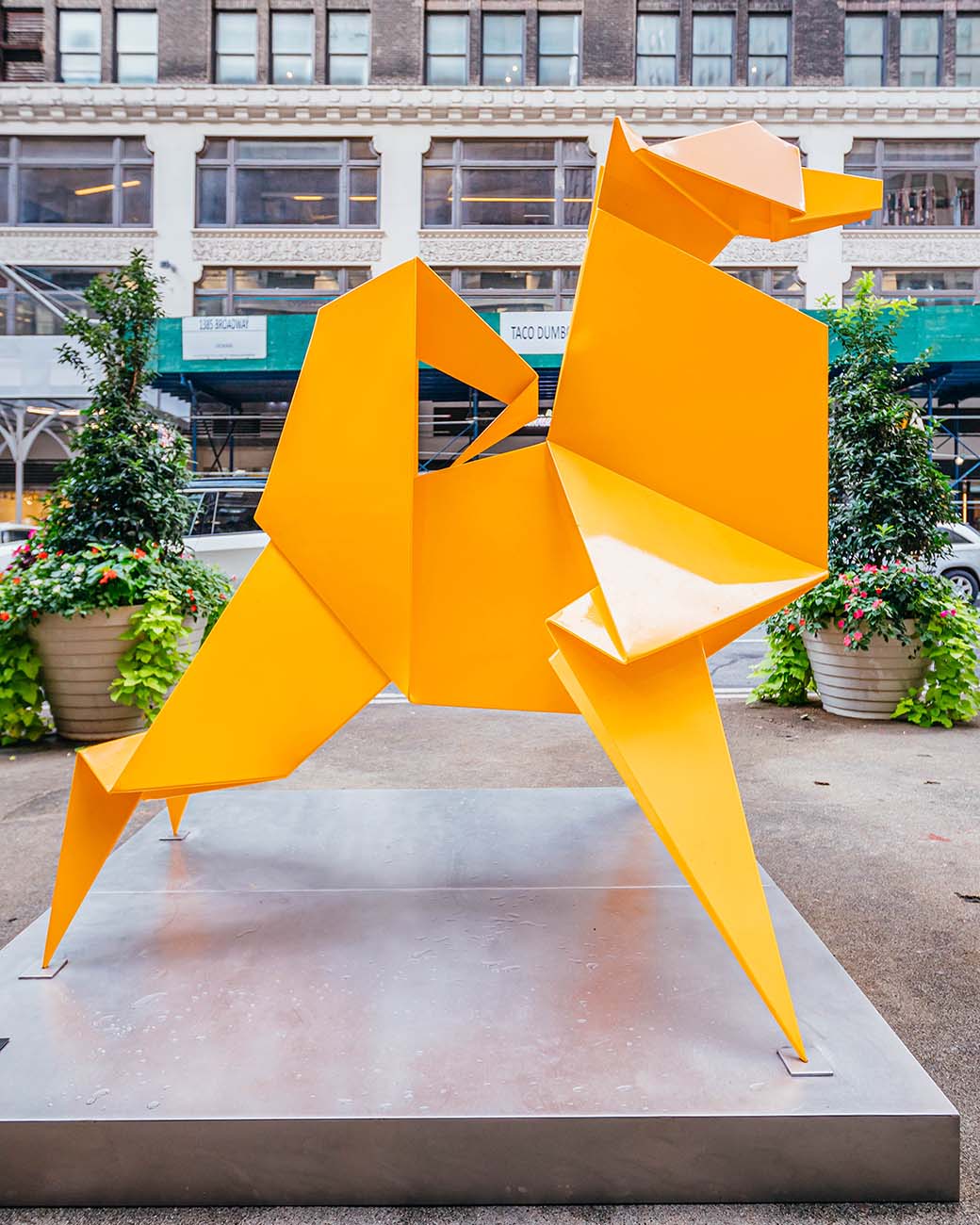 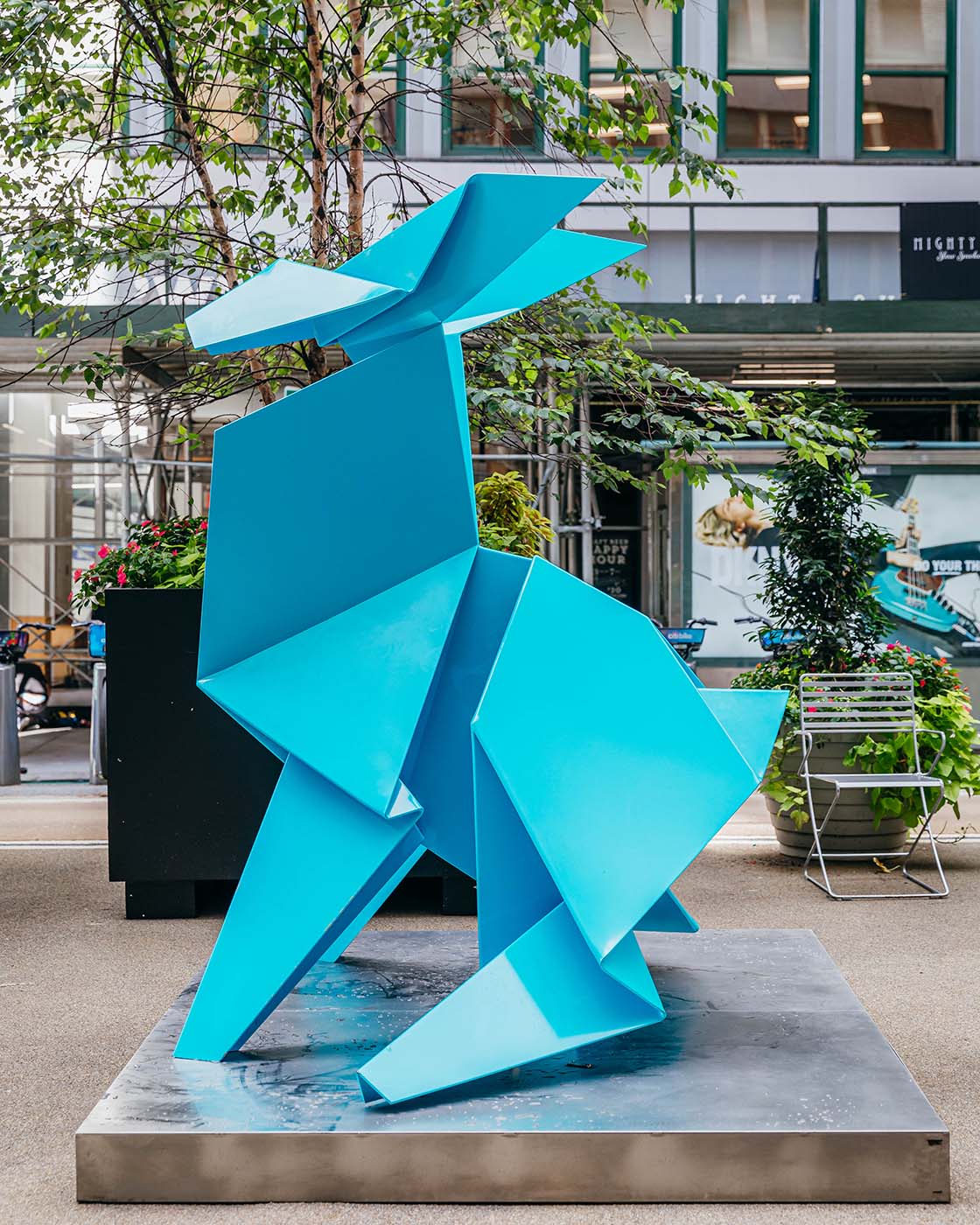 Broadway itself, once the longest urban street in the world, is now on its way to becoming the longest urban public space. At each node where the diagonal of Broadway intersects the orthogonal grid at one of the avenues, it creates a pedestrian island or plaza, like Times Square, Madison Square, Union Square and Astor Place. In between, what were once traffic lanes have been taken over by temporary plazas with painted pavements and moveable furniture. The plazas are on their way to permanent closure, as has been done in Times Square. This has been accelerated by the coronavirus, as places to spend time outside have become more important. While Times Square is a mecca for tourists, Broadway from 36th to 39th streets serves people who work in the neighborhood.

The GDA ensures that the area is lively, interesting and maintained. They have shown great skill in bringing visual arts to the area to create a continuity from the history of the neighborhood to the current day. One of the ways they do this is with a thriving public art program. In “Hacer: Transformations,” seven large origami-inspired animals bring color and joy to these public spaces. A green bear cub sits placidly, while a blue coyote is ready to pounce on the rabbit up ahead. The bright magenta elephant, named Bixby, is as much of a crowd pleaser as elephants always are, whether made of paper or steel, or in the flesh. 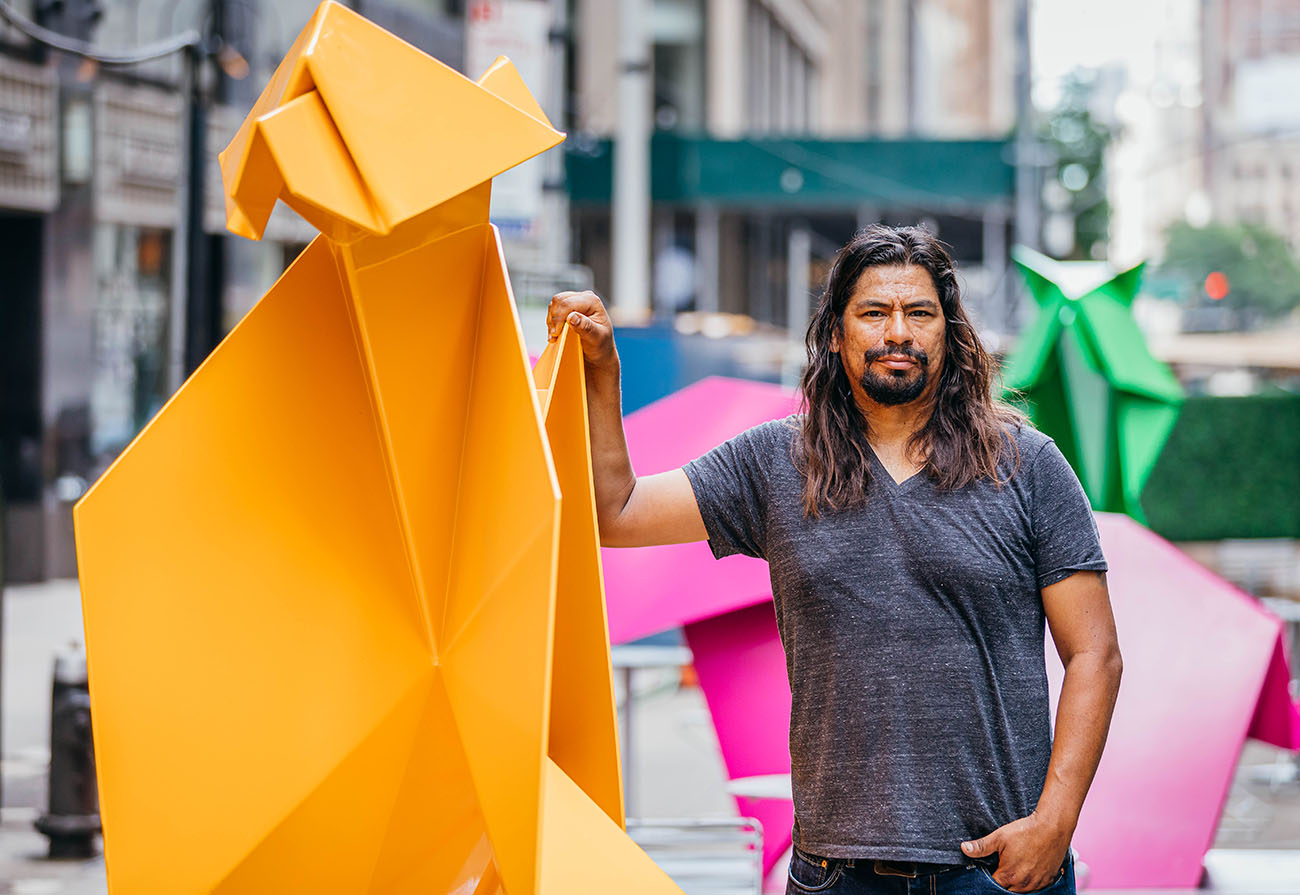 Hacer is a sculptor from the west coast who studied architecture and sculpture; he was introduced to origami as a child through the book “Sadako and the Thousand Paper Cranes” by Eleanor Coerr. He took on the professional name Hacer, which means to make in Spanish. This seems particularly apt in an area where so much was made in the past, by transforming fabrics into clothing. And it is itself in the process of transformation from an area for industrial production of fashion to a mixed-use neighborhood. 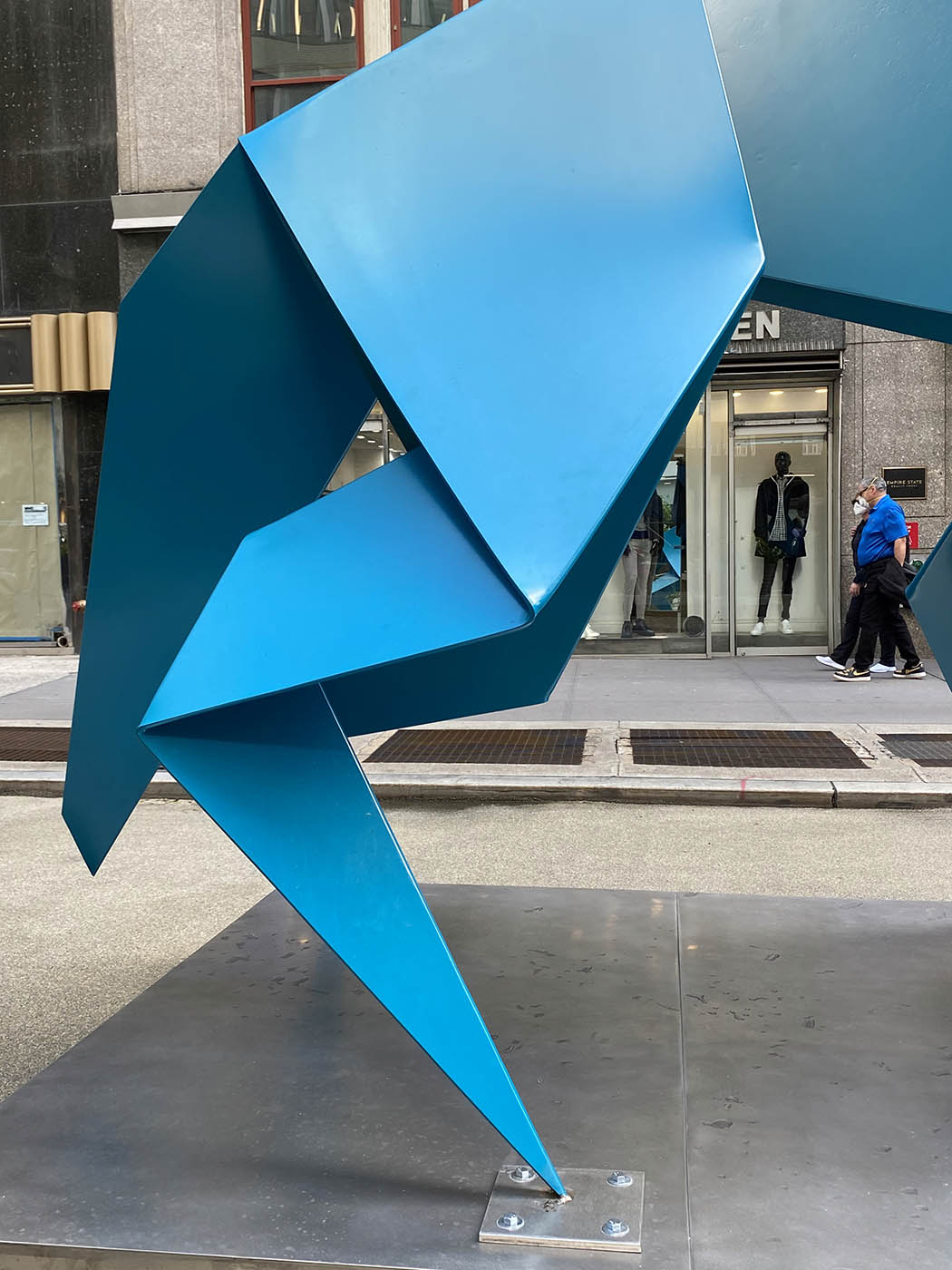 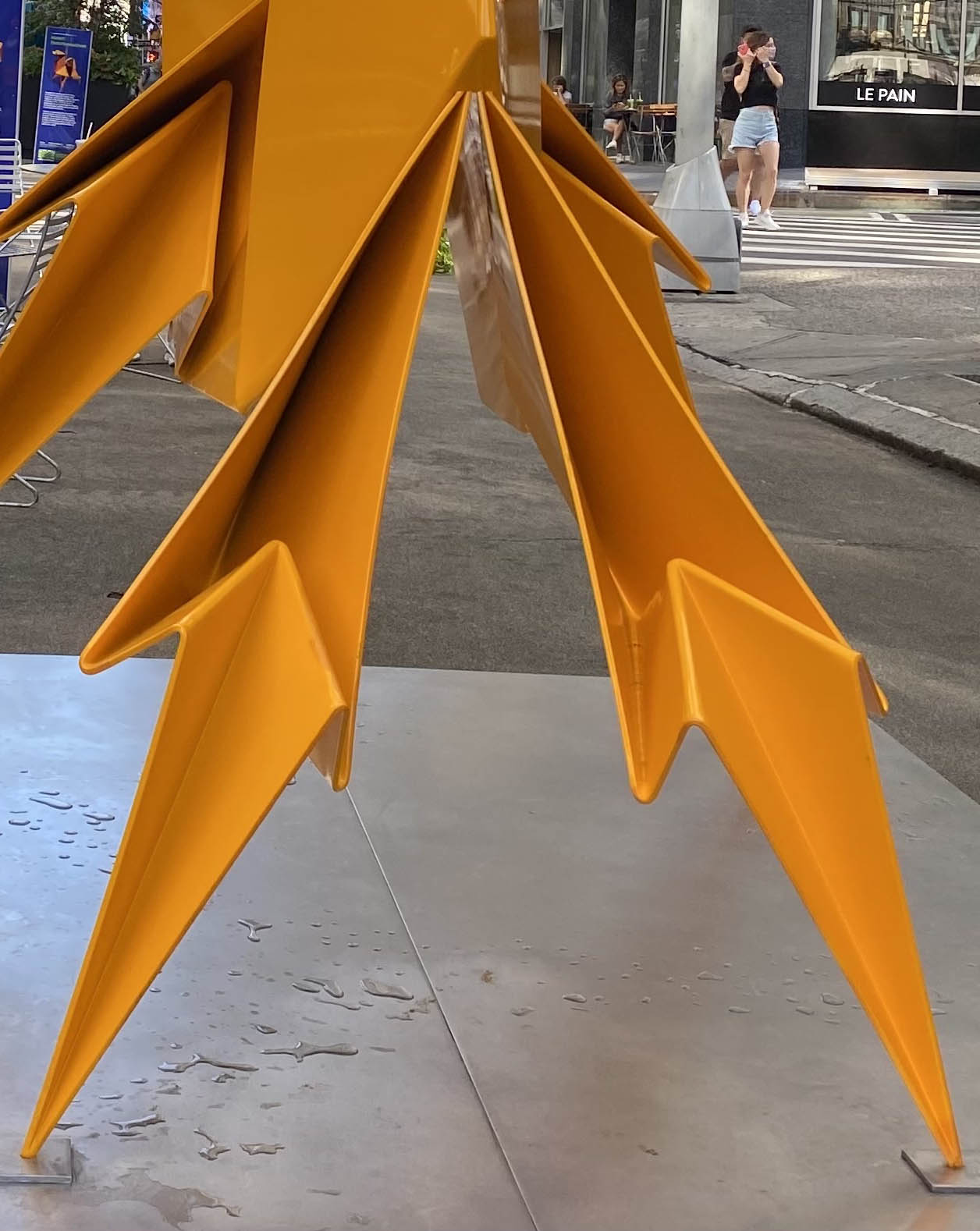 What I like about the pieces in the show is that even though the work is done with a high level of skill, it still shows the hand of the maker in that the inspiration for the design of the animals is the early pieces by designers like Robert Harbin, Isao Honda and Robert Neale. In those paper animals and in these large-scale color-coated steel sculptures, the process to make them is visible, for example, in the reverse folds of the legs, tails or trunk. The sculptor himself “aims to elicit a dynamic response about the viewer’s relationship to their childhood and believes that through this interaction all can begin anew.” This is certainly an apt goal for art in public places post-coronavirus, as people are coming back to work, some gladly, but others with a bit of trepidation. 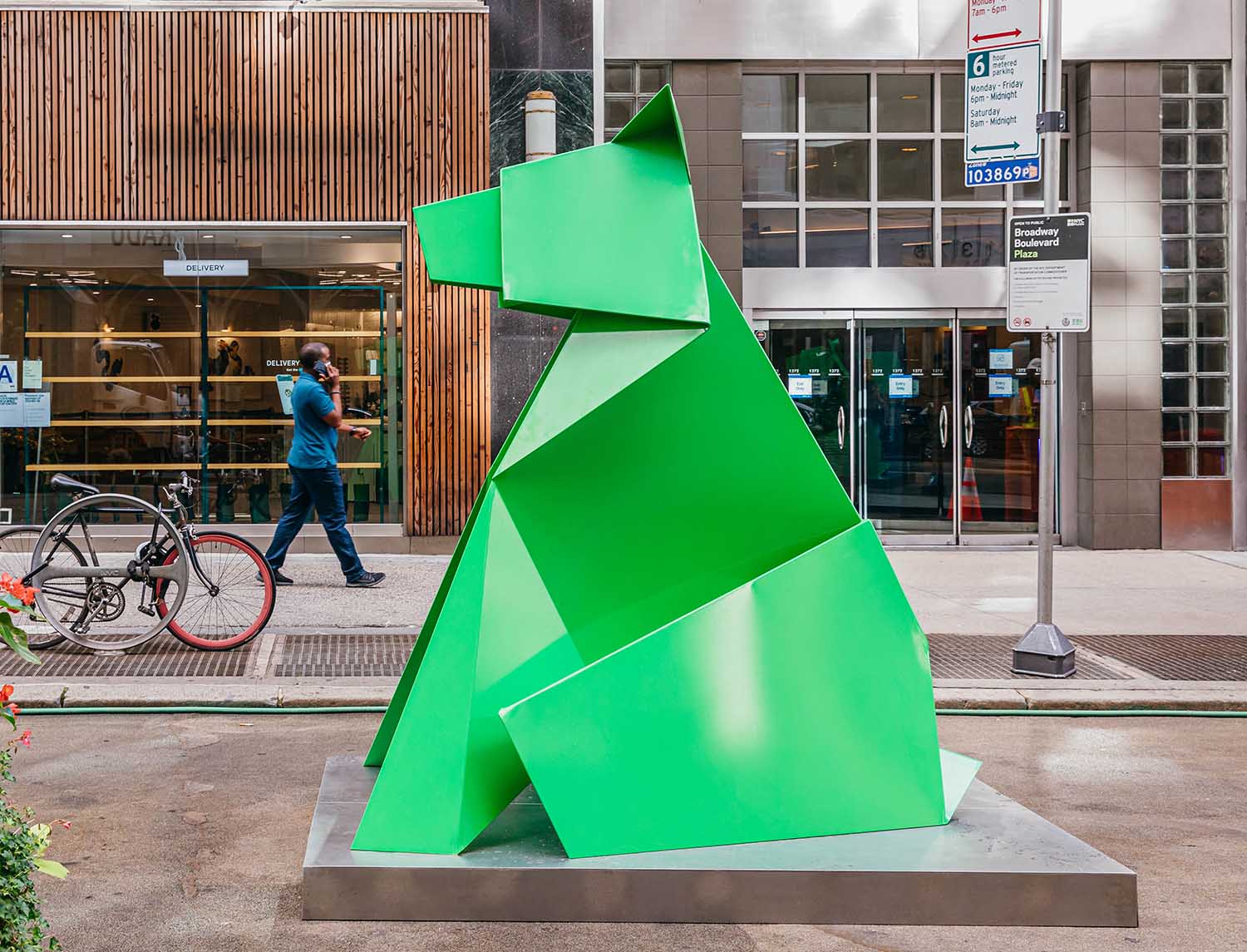 The scale of the pieces also works well. While large for origami, they are big enough to make a statement, but their size is not intimidating, and their placement at ground level invites people to interact with them, look at the way they are made, take photos, or just sit at a nearby table and enjoy the color, form and delightful subjects. Most people have made some folded paper object, even if it wasn’t thought of as origami at the time. This seems to make it easy for them to relate to these pieces translated into steel. This installation creates an identity for the space the sculptures are in, objects of interest, a signal that you are welcome here; this space is no longer for cars and trucks; it is for you. The work is presented by the Garment District Alliance in collaboration with the New York City Department of Transportation’s Art Program and it fulfills the goals of both organizations to make the use of public space more equitable.

The works will be in place until November 23, on Broadway from 36th to 39th streets. If you visit New York City, or if you live here, you can stop by, with or without getting a cup of coffee or a bite to eat from one of the neighboring shops, and just enjoy sitting next to the big yellow dog.

Donna Walcavage is an urban designer/landscape architect practicing at Stantec in New York City, frequently working with artists in designing public space. She has been folding paper since the late ’80s when she discovered the annual holiday tree at the American Museum of Natural History.

Awesome and sad that this has an end date

I knew about these sculptures since their pictures began to travel through social media. I was eager to read more about them and the story behind, and I'm happy with the wealth of information that Donna's piece has brought to The Fold. I read it with gusto until the last paragraph, where it says that the City of New York gave an end date to the show. What a pity. I was hoping they would stay. Well, I guess they'll be replaced by other temp sculptures to give opportunity to other artists to show their works. But as an origami lover, I can dream of Broadway being dressed with origami forever. Imagine how many people would be inspired and that could lead to an old dream of many: a museum of paperfolding in New York!
Laura Rozenberg