A new monthly, free origami class started up in Dec 2017 at the Prescott Public Library in Prescott Arizona. I teach the classes with help from my two origami partners, Lolly Skinner & Sue Kimball. I brought my origami teaching skills from the RUFF (Rosamond Upbeat Folding Fanatics) group that I spearheaded in Rosamond CA for 12 years before moving to the Prescott area in July 2017. The name of this activity at the Prescott Library is PrOF (Prescott Origami Fanatics).

The folks at the Prescott Library have been very welcoming and supportive of these monthly classes and the response from the community has been outstanding. Several of the 24-seat classes have been "sold out". The library advertises the classes, puts them in their on-line calendar, and manages registration.

I am the teacher and main organizer behind the classes. My two origami partners, Lolly Skinner & Sue Kimball, also attend most classes, serving as the Roaming Helpers, looking for students who are struggling, and offering help so they don't get too far behind. Lolly and Sue also help me decide on models for each class and the three of us hold practice sessions at home.

Each class has a theme; some of the themes so far have been: Boxes & Bows (Dec), Flowers (May), Shirts & Pants (Jun), Boats & Sailboats, Animals, Traditional Models, Envelopes & Letterfolds, Dogs & Cats. The classes are 3 hours long, starting with a short "About Origami" overview, followed by a brief presentation of the Two Fundamental Folds (Mountain & Valley) and other common diagramming symbols used in books. Then I teach 4-to-5 models; each model is folded twice, to improve retention, before going to the next. Since there are always first-timers present, the first 1-to-2 models are Simple and the remaining models are Low-Intermediate to Intermediate. I believe that anyone with an appropriate level of physical ability can fold any Simple-to-Intermediate model, if the teacher breaks down the more complicated maneuvers into small steps and teaches them in an unrushed, well-planned manner. It also helps to use language and humor to make the work interesting and fun. I use 12"-square scrapbooking paper to fold the model as I teach it, for better visibility by all in the classroom. A 5-10 minutes break is given approximately every hour.

Once the scheduled models have all been taught twice, the students can fold on their own, with help from the teachers, or if the students wish, an Optional model can be taught, usually something a little more challenging, but never above Intermediate. (The Optional model has never been turned down!)

To sign up for the PrOF classes at the Prescott Library:

I discovered Origami in 1965, from a library book. I was a "lone folder" for the next 36 years until I discovered OrigamiUSA online in 2001. I joined OrigamiUSA and learned about Conventions and Local Clubs. These experiences allowed me to discover that I love to teach Origami and I have been practicing and refining my methods ever since. I have also learned a lot from the excellent teaching I have been exposed to at the PCOC conferences, all of which I have attended since 2003.

Lolly Skinner discovered Origami after one of her ESL (English as a Second Language) students gave her an Origami arrangement around 1997. She then looked for Origami books at the library and discovered a fascination that continues to this day. Lolly was a school teacher, which gives her insight into running a class and how to not lose the students with difficult concepts. She was thrilled to meet Sue and Chila, when they moved to the Prescott area, and to be able to learn more about Origami from them and share the enjoyment of folding. She has taught some Origami classes at her church, and as a middle school teacher she always managed to incorporate Origami somewhere in the curriculum every year. Lolly likes to make Origami flower arrangements and has made three sets of 1000 crane wedding arrangements. She says "It is a kind of therapy for me...meditation if you will." 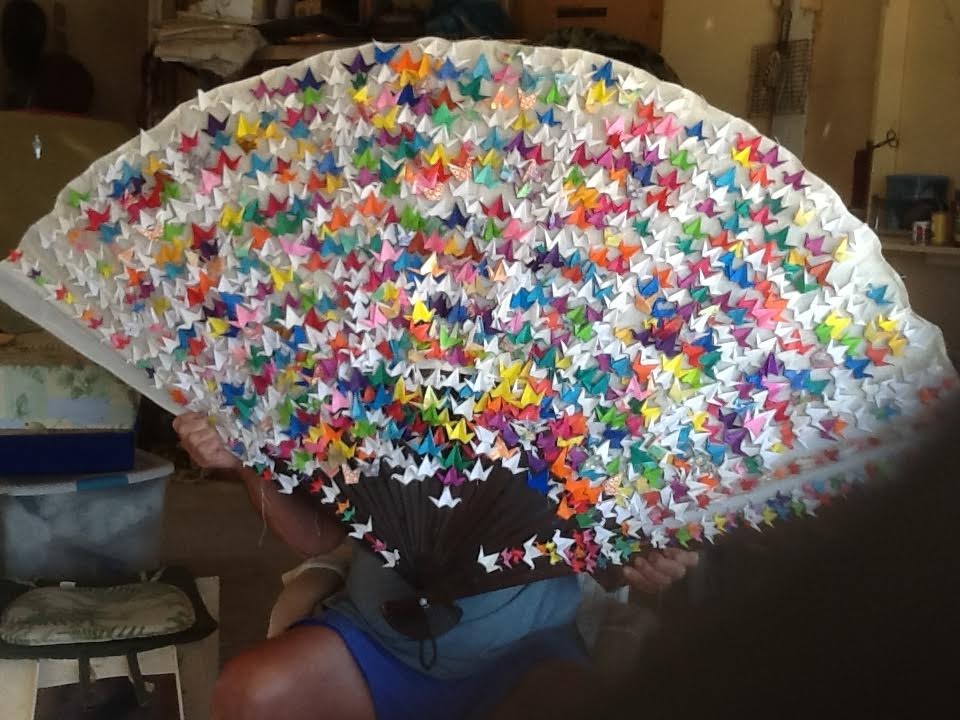 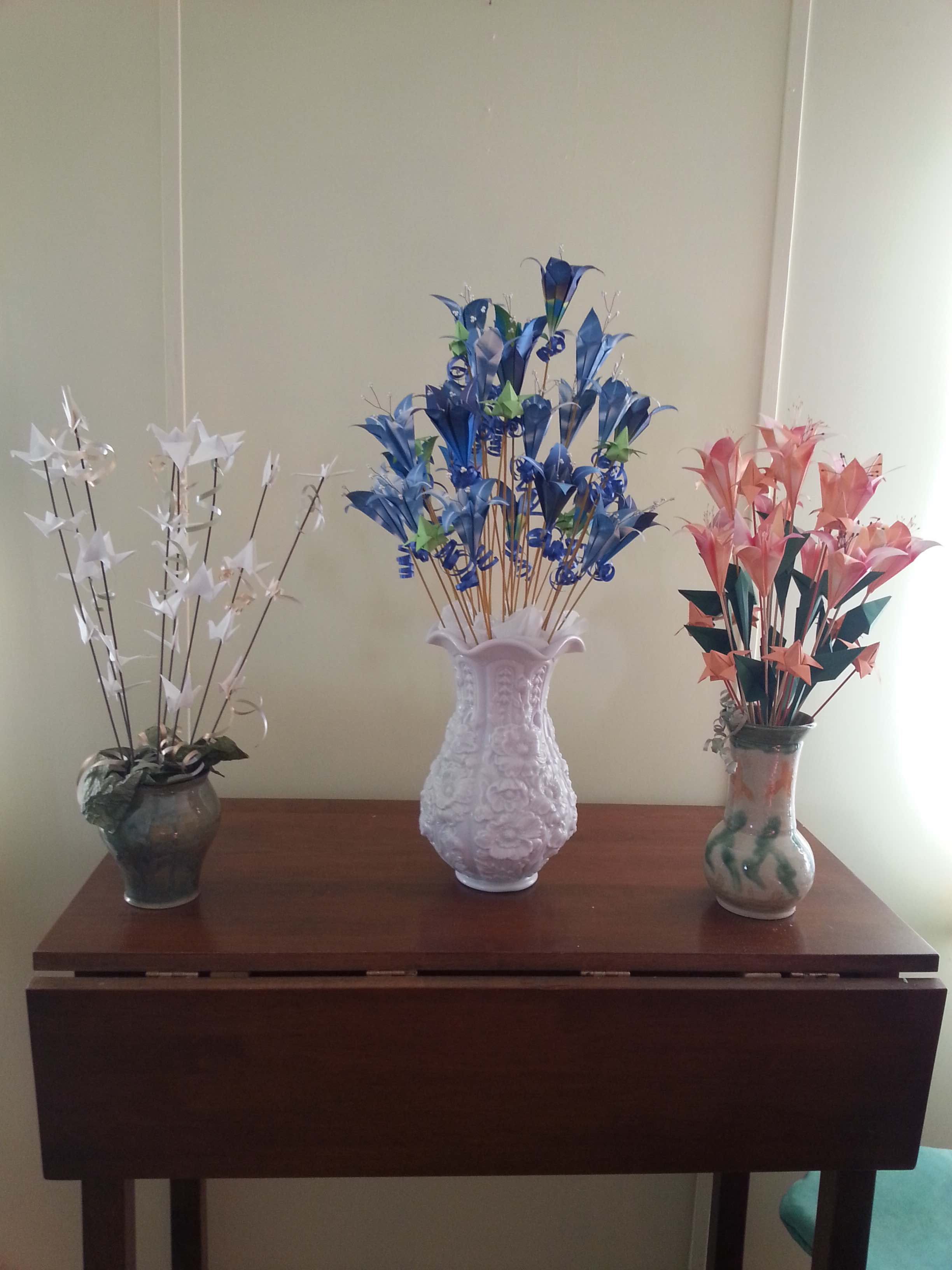 Sue Kimball discovered Origami from Chila, in a roundabout way, in approximately 2003. Sue was also a teacher in her career, mostly primary grades and Special Ed, and she also incorporated Origami into her instruction after 2003. She found that teaching a model at the beginning of the school year gave her insight into who in the classroom was strong on following instructions, paying attention to detail, and exhibiting perseverance; and who was not! This was helpful in knowing what to be watchful for throughout the school year. She has attended several PCOCs and one OUSA-Con, and also loves to teach Origami.

I am teaching origami as part of a hospital program called Breanna's Gift. I would love to know more about the models you are folding and perhaps share information? Right now I am solo though I have been part of our state group (origami minnesota OM). Thanks so much!
rochelle

A couple of questions for Chila

Hi Chila. Sounds like your new group is really fun.

I'm amazed that you're able to teach four to five models in three hours if there are newcomers, especially if the last two or three models are between low-intermediate and mid-intermediate complexity. How do you do that? It usually takes me almost an hour to teach a simple model to beginners, including the time for folding the model a second time and I haven't been able to teach a mid-intermediate to an origami novice. I also wanted to ask you, how old are the youngest members? I feel it can be particularly challenging to teach kids that are too young, that's why I ask.

Thank you for sharing your experience and congratulations on your wonderful group. I look forward to your answers to my questions =D