In a small town of about 12,000 residents sixty miles west of Knoxville, TN, beats the heart of the “origami scene” in Tennessee. Read what the founder of the group, Marge Hofknecht has to say:

Plateau Origami People have been folding actively since about 2005. We're all a little shadowy on the exact establishment date, but I remember meeting Patricia Westerfield during an art exhibition here in Crossville, TN. I was demonstrating origami, and she sat down at my table and folded several models with me. Later, I met with her at her home, and together we planned our paper folding group. I am a founding member of the Greater Philadelphia Paper Folders (GP^3) and was actively involved with the group when I lived there. I based much of the planning around the format of that group. We put short articles in our local paper about our group and posted flyers in the Art Circle Public Library. And soon, the group came together. Most of our members were new to origami and eager to learn. We first met at Patricia's home where we came up with the name. After awhile we wanted to be more visible. so we began to meet at a senior center, then moved to the library, an art center, an art gallery, and now we're back at the library.

Basically we are a hobby group, but we also participate in community activities at the library and in connection with the art community and their functions. Last summer we had a booth at the Asian Festival held in Knoxville. That was fun and we met so many people who stopped by our tables to fold some models. 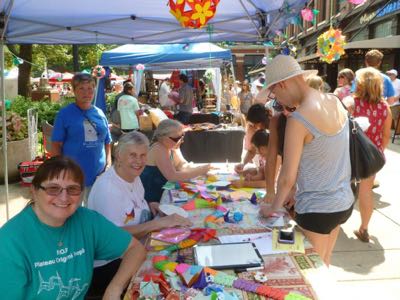 We also participate in Crossville's Parade of Christmas Trees that's hosted by a local bank. Working on the ornaments affords us opportunities to learn new models and try different papers. Occasionally, members (like me!) sometimes go solo or with another folder for demonstrations at schools, other libraries, and so on. 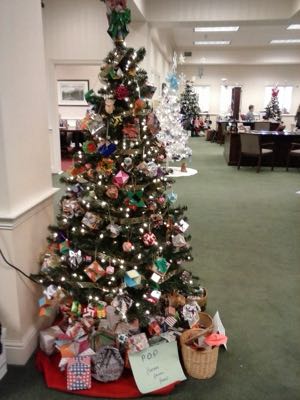 Periodically, we meet with a group of folders in Nashville. Malachi Brown is the organizer of that group. He is one interesting, dedicated, and patient teacher.

For the last two years, we have presented what is called The Origami Tsunami at the library. Our third one is coming up on June 9th. 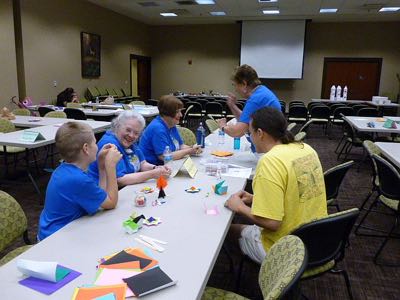 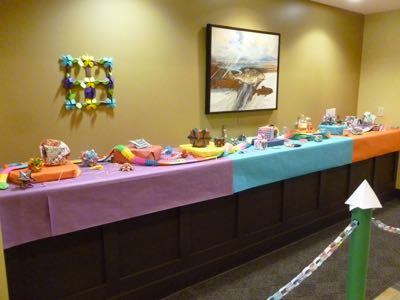 Our organizer is Alex Matthews, a young origami author and someone I'm very proud to know. He came to origami when I was teaching it at his home school co-op. Just a few months ago he published his first origami book, A Fold Above the Rest Origami. He will have a book-signing day soon at the library where he will teach a model or two from his book.

Alex has this to say about his experiences at P.O.P.:

I have enjoyed attending the P.O.P. meetings for the last nine years, because I am inspired by the other attendees to design higher quality models, and I enjoy stimulating their origami abilities to new heights. I can proudly say there is no other place to be from 1-3 pm on Folding Fridays. Plateau Origami People are special to me, because without their help the largest completely free origami festival in the U.S. would never exist. Origami Tsunami is a local origami festival held annually in Crossville, TN, allowing folders of all abilities to take part in one of ten simultaneous classes, watch and listen to videos on origami given by top origami artists and professors from around the globe. So, if you are in the area on June 9, come to the best folding fun in the South, down in middle Tennessee."
— Alex Matthews

What's ahead for P.O.P? Besides the aforementioned Tsunami and making ornaments for the Christmas tree, we are hoping to participate once again in the Knoxville Asian Festival. Each of our members continues to explore origami and to share with each other what we learn. Throughout, we have fun! We meet once a week on Friday afternoons, 1 - 3 pm, at the Art Circle Public Library.

Further to the east in Tennessee, Origami Knoxville (OK) is a sputtering start-up group looking toward its fourth second-Saturday meeting next week. After two previously failed attempts to organize a folding group for Knoxville, this time we are focusing on more extensive publicity: a front-page newspaper article in the neighborhood Farragut Shopper-News, listing the group in the community events section of the public radio station, posting flyers, holding one-day workshops at the local KnoxMakers facility, and distributing email notices to anyone who has shown an interest in origami. Hopefully, we can locate some of those “lone folders” and establish a vibrant group of origami enthusiasts in Knoxville. In the meantime, I will continue to drive the sixty miles most Fridays to fold with the wonderful members of P.O.P.