The Complete Blintz Part 1: The Yakko 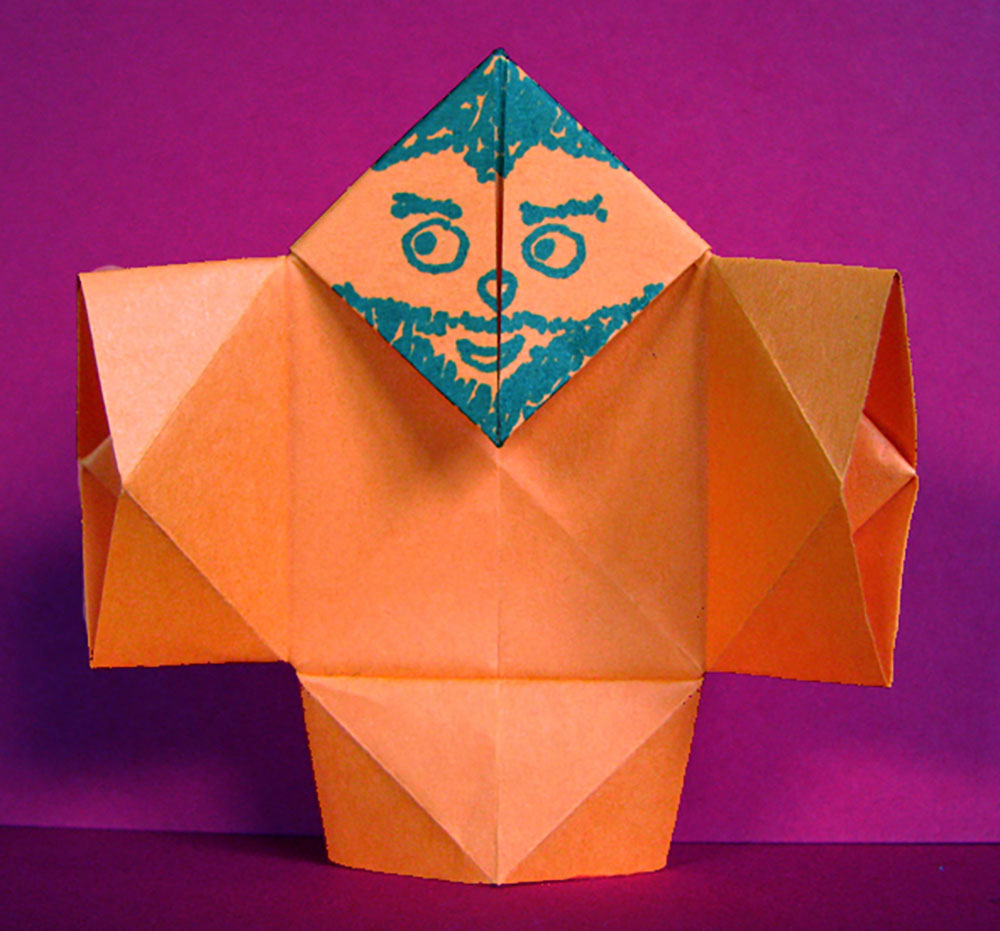 The Yakko. Folded and photographed by the author.

The Blintz — folding the four corners of a square to the center — is one of the common bases in origami.

But, how do you blintz? Of course, I know you can fold a blintz, but in this series of articles we shall review the history, landmarks, folding sequences, and more. There might be a detail or two you weren’t aware of.

Today we present the Yakko, a simple, archetypical origami model that is composed almost completely of blintzes. During the next many weeks we shall see a whopping 13 installments of essays, diagrams, and more about the blintz.

Originally, a yakko was a servant of a samurai. Today he is more like the Pierrot figure, somewhat humoristic. In origami, the Yakko is one of the oldest models. A woodcut in the book “Ranma Zushiki” (“Decorative Panels”) from 1734 depicts it in a group of models.

The Ranma Zushiki woodcut from 1734.

The folding is simple: Three alternating blintzes (blintz and turn over) are followed by squashing open three flaps. The Yakko is one of three models based almost purely on blintzes. The other two are the salt cellar, or fortune teller, with two alternating blintzes plus opening up, and the lotus flower, which has three or four blintz folds on the same side followed by reverse folding of all the flaps. 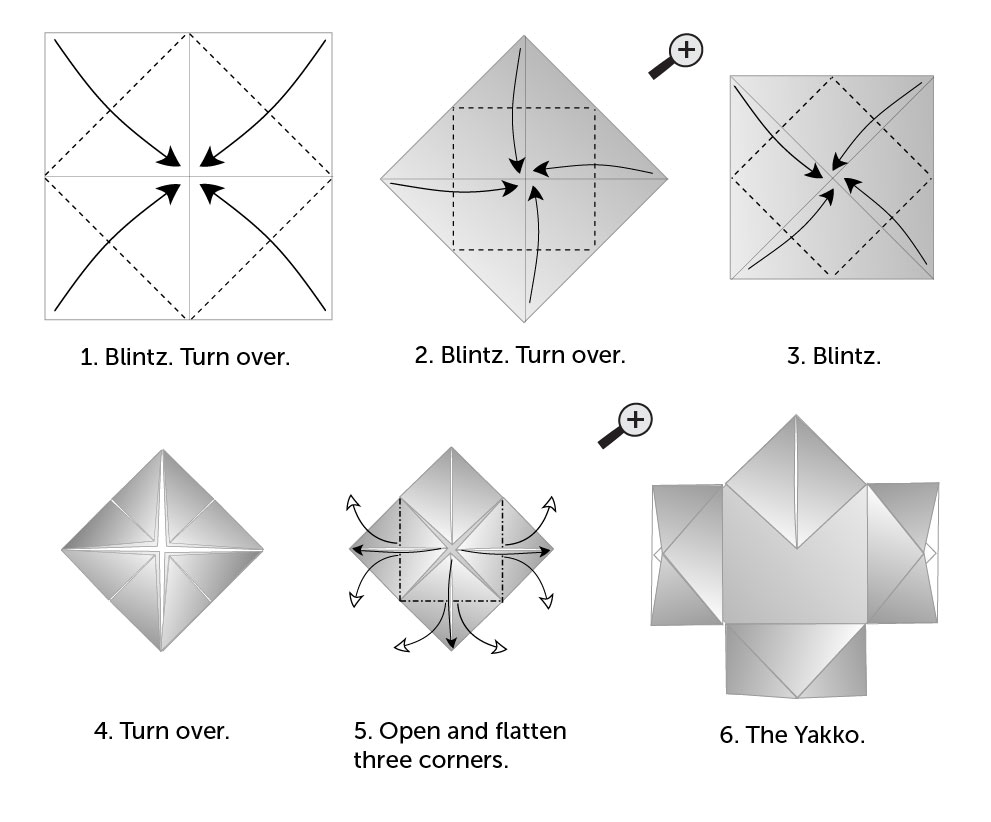 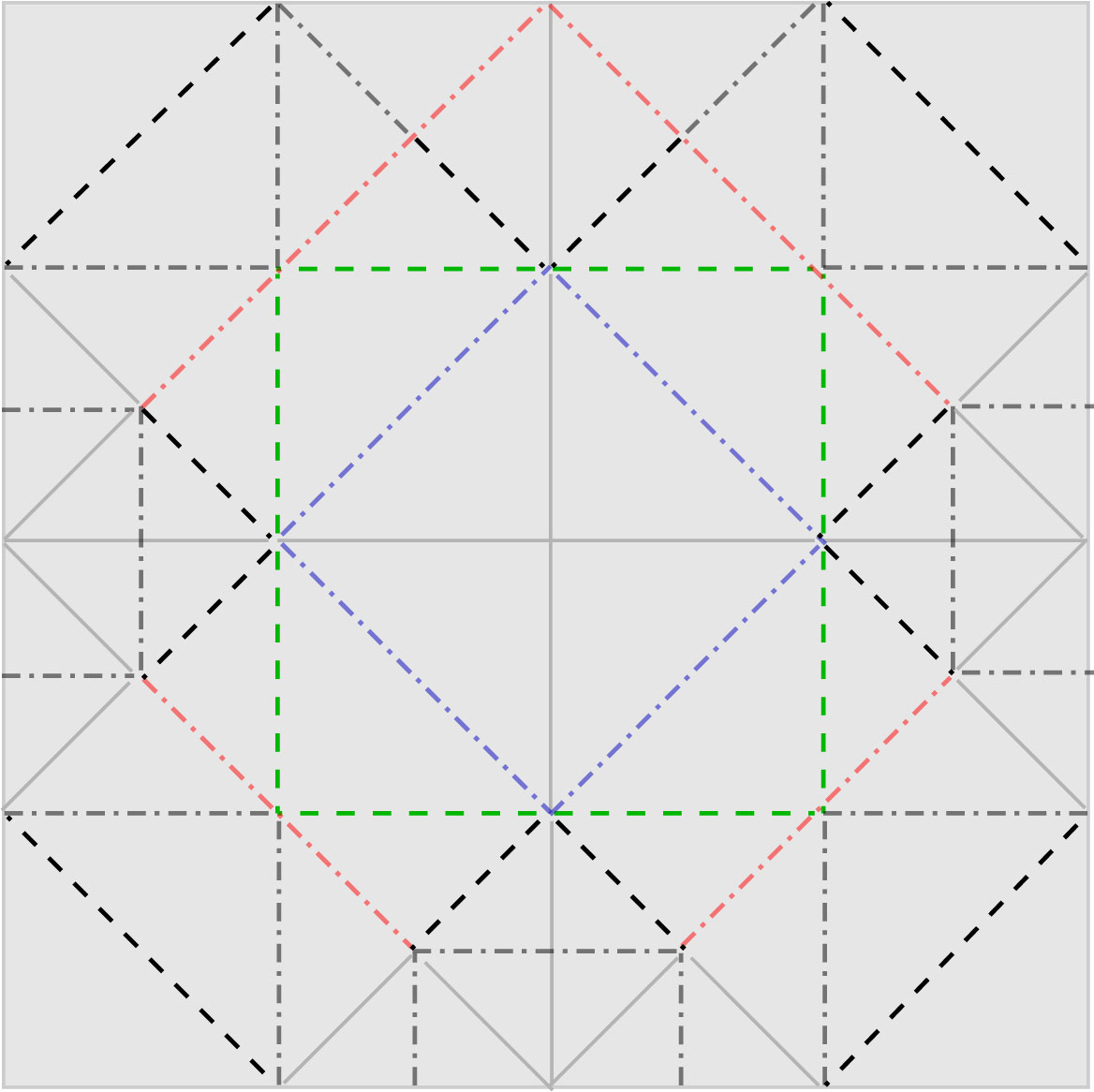 The crease pattern for Yakko. Red, green and blue represent blintz folds done in that order.

In the next installment, we will see more about Ranma Zushiki and the history of the blintz featuring two of our heroes, Akira Yoshizawa and Gershon Legman.

For a good decade now, I've enjoyed making boxes/beads from the Blintz Fold. I haven't seen the idea published anywhere, but it's so simple that I feel sure somebody else must have created it before me. I didn't know the history of the name Yakko until now, but I think it makes a good name for the box.

Quick directions: Make 2 Yakko models, in contrasting colors, if you like (model 1 and model 2). Squash open the heads, so you now have a central flat square with a rectangle on each side. Turn over the models so the flat square is face-down, On each model: Valley fold the rectangles upward at right angles to the square. Note that the rectangles have pockets. Turn model 1 upside down. Insert one rectangle of model 1 into the corresponding rectangle of model 2. Then insert a neighboring rectangle from model 2 into the corresponding rectangle of model 1. Continue around the square, alternating rectangles inside/outside. Put a treasure in the box before joining the 4th rectangles! The box will have slits at each corner, so it is easy to run a string or long strip of paper through the box to treat it like a bead.
Karen Reeds, Princeton Public Library Origami Group karenmreeds [at] gmail.com 2/10/2021

Thank you, Karen,
The bead box, now nick-named the Yakko Box, bears the hallmark of simplicity. I didn't know about that model, and yet fully comprehend your explanation. Presumably the box works better from smaller size paper? I kind of imagine a teenager wearing a bracelet of Yakko beads containing their milk teeth...
Regards,
Hans

PS: Thanks to Jane Rosemarin for her beautiful editing of my article.

This is great! Ilove exploring Yakko variatioins. The blintz fold is a step in more models than I can think of offhand.

You can also take that idea to the next level by making quilts and polyhedra from them, but I highly recommend that you don't use paper that is too thick. It is a very interesting concept that I wish more people knew about.

Karen,
I love the Yakko Box! I just made it from your directions. It is sturdy.
--Cliff