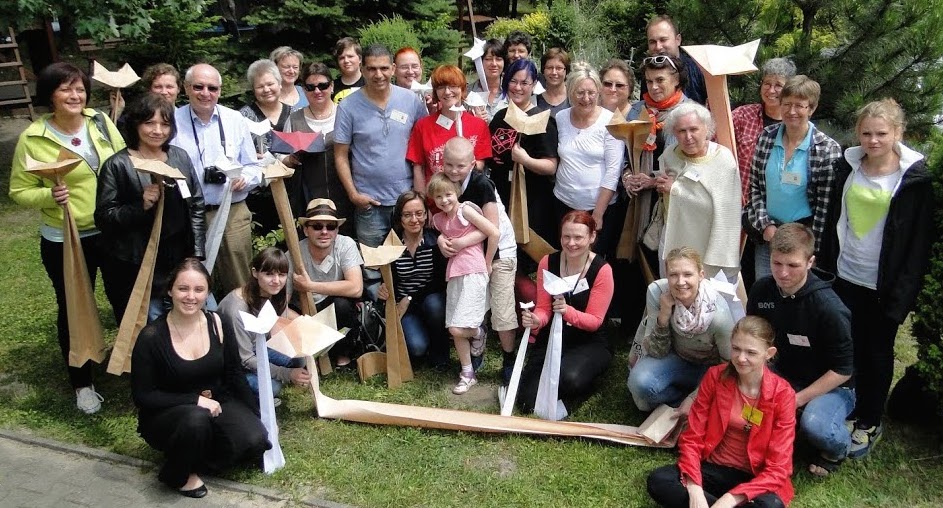 All participants but Wojciech Burczyk, the photographer.
All images courtesy of Wojciech and Krystyna Burczyk.

There is always a first for everything, and the outdoor polish convention was just that for me: first convention in Poland and first as a guest of honor. Yes, I probably did something right to gain this privilege. But privileges come with responsibility, and as a guest of honor, I was expected to give some workshops, bring models to present and, most horrifying, a talk, titled "Origami is Art". Presented with such a wide open topic, I had to calm down my hysteria and try to define the scope of this talk, set my opinion about it, and write it all in a presentable, understandable way.

The convention, AKA as the 13th Outdoor Origami Meeting, was held in a small school in Krakow. We used the cafeteria, the hall and one class. With 30 people and three workshops at any given moment, there was little free folding during the day.

One of my workshops asked for an oven, as we folded a cake mold from a special paper in which you can bake a cake. The organizers invited all to their city apartment where I was staying, to have some night folding, with dinner, and an origami chocolate cake as a desert. We all were able to fit inside and managed to fold (Kade Chan dragon, taught by Robin Shultz, in my case), while waiting for the ready made mix cake to be baked.

The level of the local guys is high, and this is the best feature for everyone who gives a workshop in a convention. Many here fold tessellation and modulars, as well as the international guests, from Hungary, the Netherlands and Germany. Since this is the thirteen convention, arranged by the Burczyks, I completed diagramming 13 variations of my cube tessellation, and brought with me all metal parts, epoxy glue, cable and pre-cut wood/paper to create a pendant. I teach tessellations by the single basic repetitive unit, which I call the Molecule, and this pendant is made from 2 x 2 molecules. We started with paper, understanding the logic behind the structure, and then we used the wood coated paper to make the real pendant. I was tremendously happy when Somos Endre, from Hungary, showed me the fourteenth variation, which he designed. As a teacher, I find nothing more satisfying then a successful student. 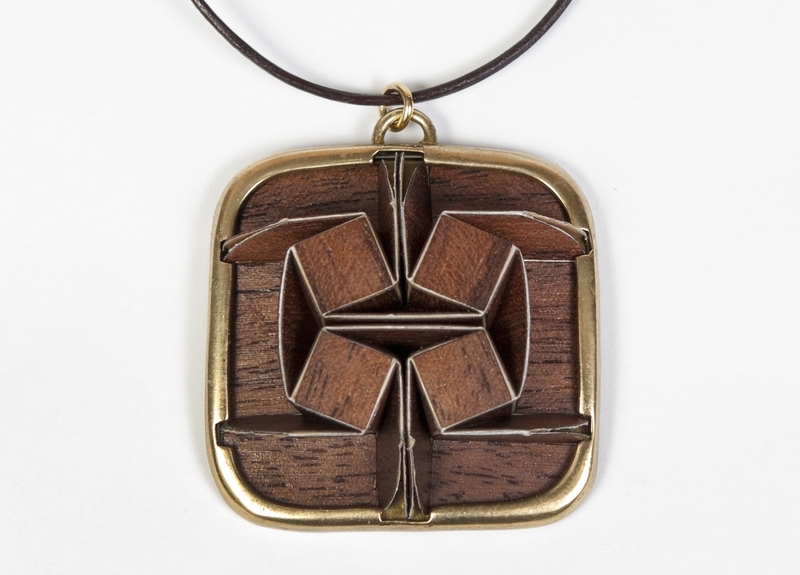 So, is origami an art?

Just on the outer river bank, the apartment overlooks the old Jewish ghetto. On the other side is Schindler`s factory. For me, this has special meaning. Coming from Israel I am amazed how this place has change since World War II. The same applies to me. If you had told me five years ago that I would be here as an invited guest, at an origami convention, I would not have believed it. 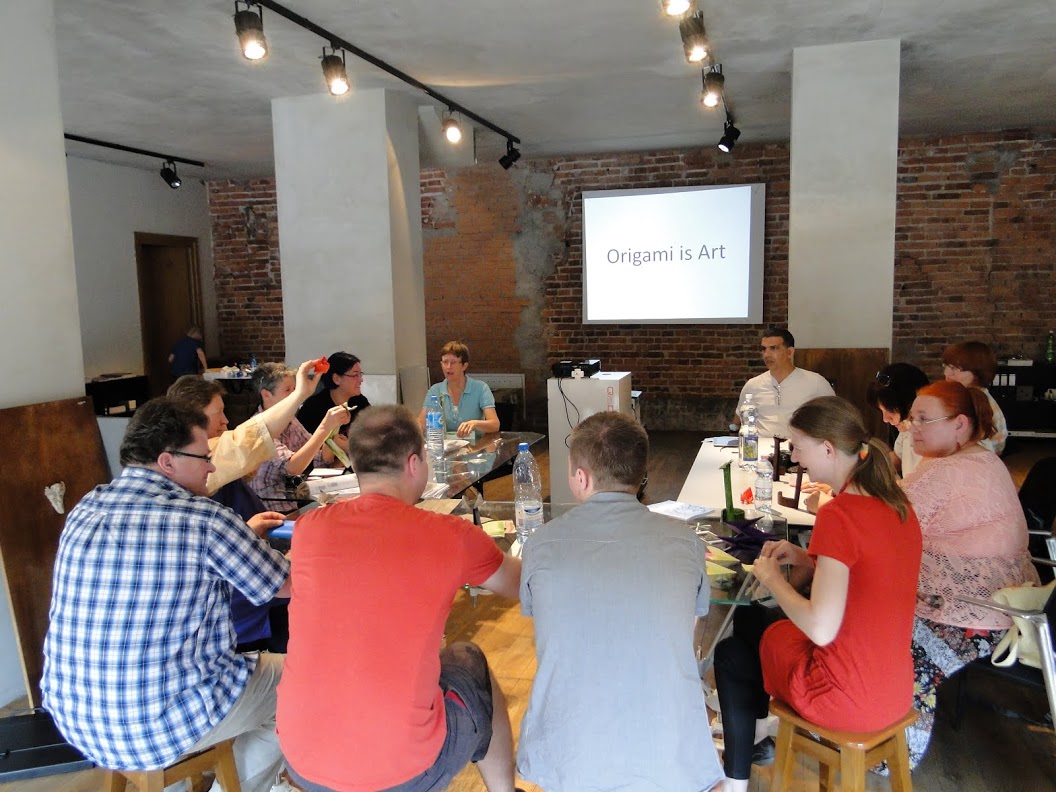 A new meaning to the phrase "Precreases";
folding together a day before official opening.

On our first day, Krystyna guided us through the neighborhood. Beside history, the area is full with mural and street art. One location presents sealed air from another city, in a big metal container. This raised the question - is that art? - directly relating to my talk during the convention. Where a slash of paper knife in white canvas (see lucio Fontana as an example) is presented and sold as fine art, we ask ourselves, "is origami is art." I say "No!"; origami is just a technique. The real question is, "can I make art by using origami only?" For that my answer is an absolute Yes!. To base my theory, I need to present what art is, and who is an artist, and it's too long to be presented here; I must dedicate another full article just for that. 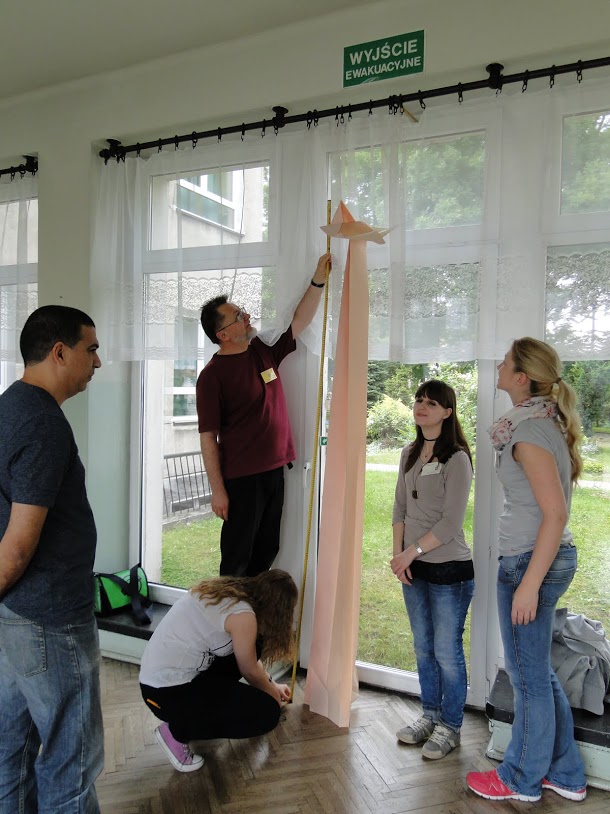 Wojciech Burczyk measuring how high
is our cat, during a competition.

This convention is not organized by a society or an organization. It is all arranged just by a few persons, lead by Krystyna and Wojciech, and for no money making. The cost for the convention is all for the ticket flight for the guest, and for a sharp increase in his weight. Their city apartment is given for this benefit. The school that hosts us asks for nothing, and each can choose his hotel, with a range of options, from a youth hostel to more comfortable and starred hotels. All are a reasonable distance from the school. This makes it one of the cheapest conventions in the area, with quite a lot of quality folders from the region, the cost effectiveness of the Plener convention is remarkable!

Am I an artist? The answer is divided in two - Can I define my self as one? Do I get the recognition as such from another person (which is not my mother, of course)? If you ever wandered in this area, you know what I mean. Later on, one wonders if he is a good artist, and these self doubts may be endless. Being a guest of honor is one of the strongest recognitions possible both for being an artist, and being a good one, and my gratitude for that is fathomless.