After three Italian conventions in a row, I knew I had to break the spell they have cast upon me. "So, this year it is Spain" I said. Knowing that the first European Origami Congress would be held a day before and that the exhibition "La Magia Del Papel" presenting the work of both Eric Joisel and Le Crimp would be up and running, I had all the reasons I needed to be in Zaragoza in late April.

Possibly the oldest Origami association (meetings may have begun as early as the 1950s), Grupo Zaragozano de Papiroflexia, is located here in Zaragoza. This city is all about origami, as you can see in the shops windows—a crane or a modular will decorate many. Moreover, people here are very interested in origami, and for them this convention was covered both by local radio and TV stations.

Being early by a day, I had time to do some sightseeing at the city center. I was overwhelmed by the Basilica of Our Lady of the Pillar and many other sites only a walking distance from the hotel. There are many hobby shops and many interesting papers are sold, with and without patterns.

One example for the love of the city for origami is this exhibition. Set in the Centro De Historias museum, all floors were dedicated to folded paper. The Crimp group is presenting Arrugado!, which means "crumple" or "creased." In a unique folding technique, they have created an amazing under-the-sea experience, with many mushrooms, strange fish, and huge sheets of crumpled paper. Although this was truly amazing, it was only a warm-up act for the art of Eric Joisel. This is a retrospective exhibition that shows the many stages of development Eric went through. You can see his desktop, and some diagrams, half made models and a large variety of his handigazingwork. I stopped at the musicians for a very long time, seeing these iconic models for the first time. I gazed in awe at Legolas, and I quote Eric: "This is the only model I am satisfied with", mainly because of the super elegant way the unfolded paper makes the cape hanging from his shoulder. You can also see his huge rhino, masks, bottles, horse head, his latest work of Comedy De La Arte, and many more. 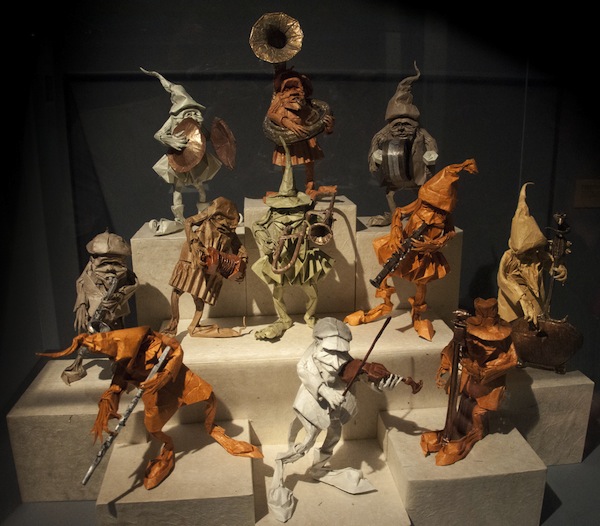 
I finished my tour after some long minutes gazing at this model, admiring the perfect proportions with the visible finger prints of his work.

With three days, four halls, four guests of honor, 170 guests from 19 countries and 80 classes on the program, it promised to give a great variety of models. Most of them were figurative, in different level and techniques, with dry and wet folding; some classes were about modulars and just a pinch of tessellations. The level of folders was high, and I was surprised to see in my class first time tessellators managing the collapse of my Cubes tessellation without any explanation from me. The same was true for the classes other gave; as you could see the pace was good.

Since we were in Spain, timetables were as is common here—some siesta after lunch, and with the late dinner, at 8:30 or even 9:00 pm, that went into the late night—you could see little origami during those hours. Unlike in Italy, I didn't have any very late night folding sessions.

The guests of honor

Four, not one less, is a big number. Coming from three different continents, they promised an interesting and exciting mix of models and niches, which was delivered!

Victor Coeurjoly, from Madrid, highly surprised me with his mature style. I must say it reminded me of the artwork of Dali, with long lines and no-heads figures. His scope of work is wide, including women, animals, and stick human figures. I joined his Giraffe class and enjoyed seeing how these unique long lines are formed from quite a regular base. To get that, he uses extremely thin paper (in our class it was some kind of a gold coated foil). So talented, and yet he is only 20 years old! 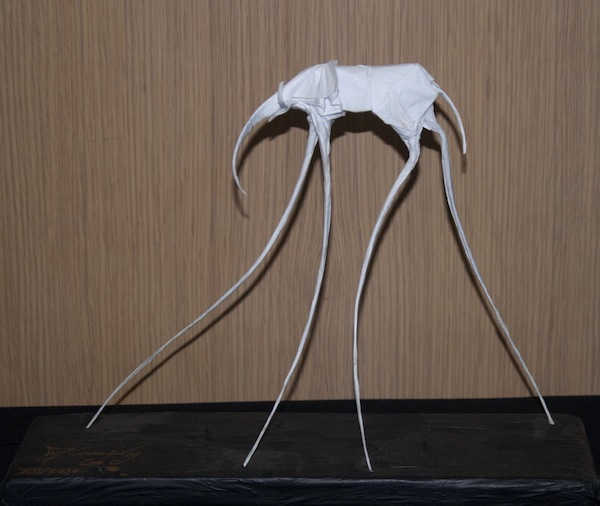 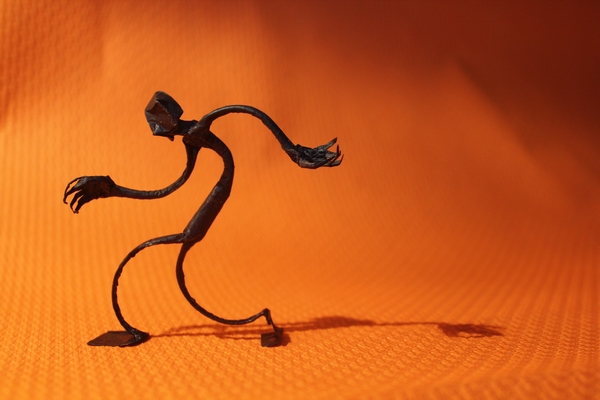 
Carlos Gonzalez, AKA "Halle", from Madrid, too, needs very little introduction. He is a big guy, with a big smile and heart, and you get an immediate feel of welcoming friendship emanating from him. His exhibition table was full of delightful figures, highly colorful, of cartoon stars. I really liked Homer leaning on a Beer bottle! 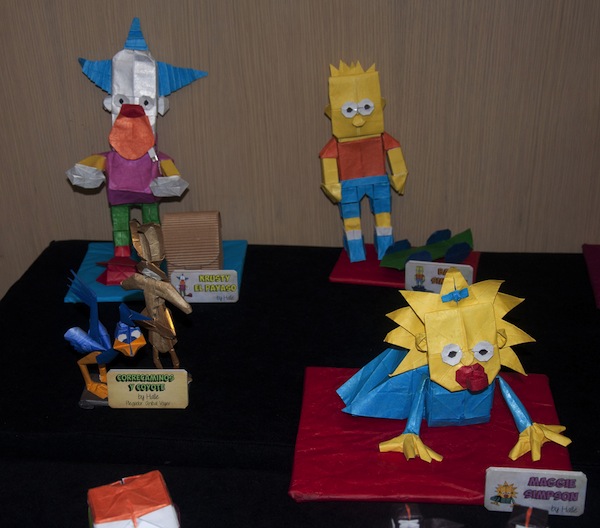 
Nicolas Gajardo (27) is another young rising star from Santiago, Chile. His models are full of expressions, with clever color changes, as he explained in the conference room how he designed the White-headed capuchin. Unfortunately, I missed all his classes; a common problem when you have that many options at any given time. 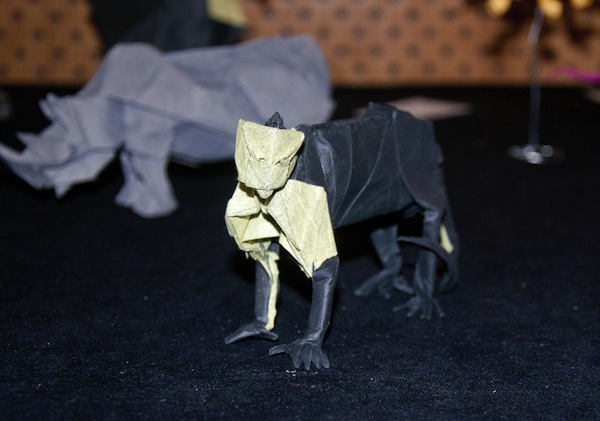 
Last but not least, is Takuro Kashiwamura (23), from Tokyo, Japan. Representing the young group Orist, he humbly presented a variety of super complex models, showing skill and delicacy. 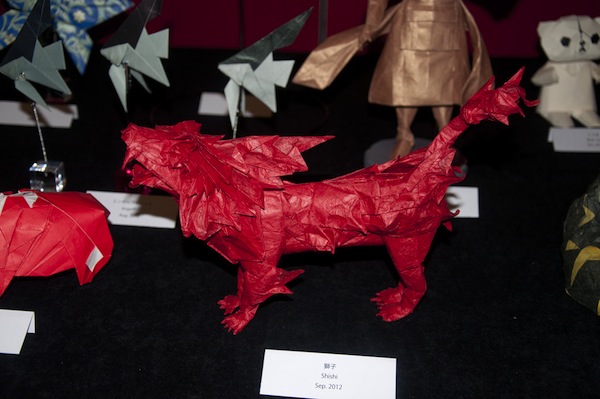 During breakfast, while discussing wildlife issues with Bernie Peyton, he suddenly changed course when a young Spanish folder joined us. Within seconds the conversation shifted to how easy creating models is, and both of us got a flash course for T-rex designing from a napkin.

Late at the first night I won the contest of one-handed-speed-crane-folding but lost the legs-only contest.

During the last dinner I managed to have some quality time with the MFPP president, when I learned her color changing newest flower.

With exhibition tables all around the main hall, the origami permeates the atmosphere. It may not be the most packed tables you have seen, but still, from lamps to earrings, Dassa's miniatures and Camels from camel paper by Saadya, sharks and snakes: all made a delightful view for all who saw them. 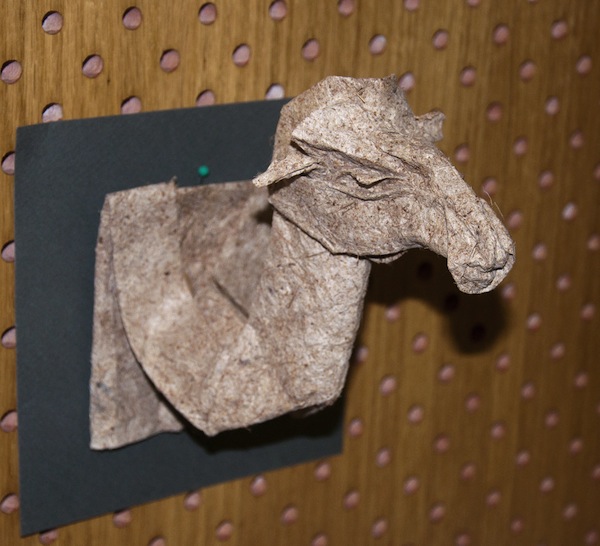 
On a side note

The first European origami congress was held on the morning of the first convention day. With participants from many associations, our task was to lay the groundwork for a pan-European cooperation. There is much in common between the many groups, and the idea of synergy began to take shape. It is too early to present concrete steps, but for sure there will be a follow up.

The essence of origami

It's not an easy task to write a review about a convention. Unlike reviews of paper, with known properties and measurements, you cannot break down a convention into the level of food, and difficulty level of classes, multiplied by the number of participants. No, the main issue about a convention is the atmosphere, the air you breathe, the sight you see when you step into a class, the sound of rustling paper, the smile on the hosts' faces, the essence of origami. Here, in Zaragoza, there is definitely a professional touch, you can see that origami is a serious business, and it is treated with respect. And that is a place I would like to be in, again and again. Hola, Spain!!

(Victor's Walking Man by him, all other images by Ilan Garibi)