You know you're in Scotland for an origami convention when... the welcome pack includes Tartan (plaid) patterned paper; the convention opening starts with a welcome by Dennis Walker in kilt; and the closing fold is a sporran (the bag traditionally worn with a kilt) – of course, from noted Tartan paper.

On the weekend of August 30th to September 1st 2013, the British Origami Society Autumn Convention took place in Edinburgh, Scotland. It was the very first convention to be held in Scotland, and Martin Quinn, Kenny Dowson, Dennis Walker, and everyone else who helped, did such a great job in organizing it! 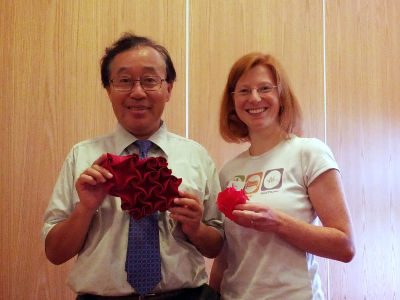 For such a special event it is best to reach for the stars. And this the organizers did, inviting the internationally known Toshikazu Kawasaki as special guest. Who has not folded one of his roses before, or at the very least admired one of them and the ingenious twist fold on which it is based?

While I had decided to attend the convention even before knowing who were the special guests, finding out Kawasaki-san was attending made my day. We had exchanged a few emails before, so meeting him face-to-face had special meaning. Kawasaki-san isn't fluent in English, but this wasn't as big an issue as one might think. That's mostly because Michael Trew accompanied Kawasaki-san everywhere as his translator, doing both simultaneous translation during the workshops and helping out with private conversations. Bravo, Michael!

I had the pleasure of attending two workshops by Kawasaki-san. I started the convention with a workshop on his rose with calyx (diagrams in "Roses, Origami and Maths" by Toshikazu Kawasaki). We were a pretty large group of eager students, and especially in this setting it showed Kawasaki-san s excellence as a teacher. I also loved his straightforward, yet humorous way of ensuring that people followed him step-by-step. And indeed we all completed the rose in an hour with another 45 minutes to spare. So Kawasaki-san took it a step further and showed us how he folds his one-minute-rose ... in a minute. And then proceeded to try and teach us in the remaining 44 minutes. He noted it was his most difficult rose, and that with the time constraints probably not everyone would finish. Especially here I loved his humor. "For some of you the model is going to look like this. If that's the case, you won't finish." is one of those catch phrases he repeated five times or so throughout teaching the model. And you know what? He was probably right, too. Even though my "one-minute"-rose didn't come out perfectly, I was really happy with this second, unplanned workshop, just as with the first one. And it was a great start to the weekend. Plus, he told us he had done an instructional video on the one-minute-rose, which is available on the Asahi Press website. Just make sure to sharpen your Japanese skills, if you don't want to miss out on the verbal pointers he gives in addition to the visual.

When Kawasaki-san and Michael joined me for lunch I was in true bliss. We had an enjoyable conversation over lunch, a little about origami, but mostly about life in general, and it was great to have a more personal encounter. 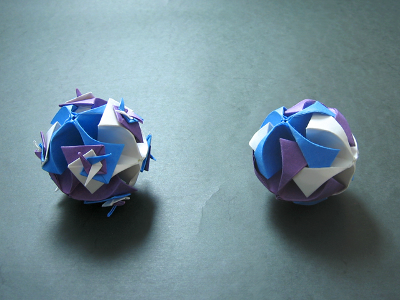 No convention can do without a small exhibition. As I was strolling through the display area, not everyone was done with setting up yet. So at some tables I wondered whose models these were or what the designs were called. The one model that struck me most was a model I'll call "Armor Ball", my attempt at translating 鎧玉. I only found out the name when I was back home, as it's one of Kawasaki-san's new models. As the display area wasn't marked as his, nor was there a label, I wondered - and asked around - what model this might be. I wanted to fold it! Well, apparently I wasn't the only one who felt that way. The next day one of Kawasaki-san's sessions, initially a talk on origami and mathematics, was replaced by a workshop on just that model that had entranced me so much. It was clear: I had to attend that workshop. And what a magnificent model! The biggest surprise was that the model has a twist - literally. The locking mechanism, which is hidden in the finished model, twists three tips together. I'm actually not sure which I prefer better: hiding the lock or actually stopping one step early and displaying it in full!

Kawasaki-san had also brought four copies of his newest, not quite published book with him, "Fancy Origami for Practical Use". He offered them up in a silent auction to raise funds for a Japanese disaster relief charity. That book also includes the diagrams for the "Armor Ball" - which is how I learned its name. By now I suppose you have realized that I grabbed one of those copies. I hadn't planned on buying any books at this convention - we didn't really have any suitcase space to spare - but you surely understand that this was a most unforeseen circumstance, and an opportunity I could not let pass!

So in addition to meeting Kawasaki-san, I also took something home from him with me: a signed copy of his book "Fancy Origami for Practical Use". 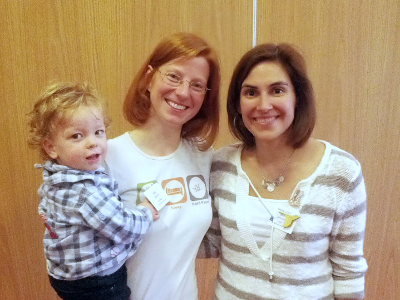 I would have been happy with just that one special guest, but, nay, the Scots know how to pamper us. As a second special guest they invited Beth Johnson, who is a new, exciting name in the world of origami designers.

She has a unique style, taking tessellations, and seeing in them shapes others have not. This results in exquisite, expressive models with clear lines. Probably her most well-known model is the sheep, whose hide is a waterbomb tessellation. Other examples I have especially fallen in love with are her hedgehog and bird. Additionally, she also has many representational non-tessellation designs, which are a joy to look at, check out her website or flickr stream! She even designed a highland cattle solely for this convention, which she also taught in a workshop.

And yes, Beth taught us how to fold her sheep in another workshop. It's a difficult model to teach, especially as it works best with strong paper, scored and wet-folded. Yet Beth did an excellent job, ensuring everyone followed along. At various points she made sure everyone saw the details of a step by walking around to each table to offer a close-up view. As we obviously didn't use the super-heavy watercolor paper she usually does, and didn't wet-fold, our resulting sheep were a bit wobbly on their feet. Yet I still loved my little sheep.

What most struck me about Beth Johnson was how young, fresh, super nice and approachable she is. I do think we will see many more great things from her, and that she has already brought a new view to origami, one which I like immensely. I liked her work when I saw it before the convention; she had published diagrams for her sheep in Creased magazine, and I had also folded her owl before. These designs had immediately resonated with me. Having gotten to know her a little at the convention has made me even more excited, and I'll be following her work more closely now. And for sure emailing her to keep in touch! 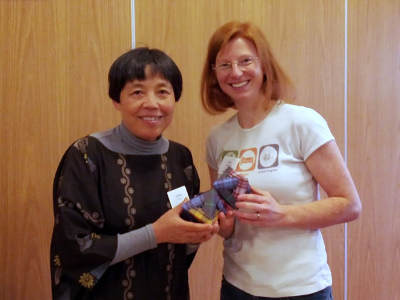 Of course there were plenty of other workshops. Tomoko Fuse taught an octahedron, and it was such a pleasure. I've been lucky to meet her a couple of times before, and she was humble and funny as always. Her design was of course fantastic. But this workshop was extra fun, because she combined it with a Japanese lesson. She gave instructions in Japanese (and then English), and had us repeat the most important terms in Japanese out loud. "Color side up!", "Repeat on the other side", and so on. It's impossible not to love her!

As I wanted to leave plenty of time to chat with people there's just one extra workshop I attended. Janneke Wielinga taught a modular bracelet, and I was actually surprised by how much in love I fell with it. It's those times when I think "Maybe I could do a video on this." - well, we'll see! I also loved that Janneke brought wonderfully patterned paper, so that all workshop attendees in the end had beautiful bracelets - more like a display model than a first fold. And of course we had to display our models right away - on our wrists, naturally!

Restricting myself to these workshops, there are many I missed and would have also loved to attend. Yet what's most important to me about conventions is meeting people, exchanging ideas, thanking others for their work, for inspiring, for being who they are, and what they mean to me. And, of course, for meeting new faces and making new friends.

That's also why for this convention I decided to take pictures - not of models, which others can do so much more beautifully than I - but of people. You can check out my album of origami friends who have a special place in my heart, at least those I found the opportunity to also catch on camera!

Ulf, Felix and Sara Adams, and Assia and Dave Brill

There are many more things I could report on, but I fear I'm stretching your patience with this long report already. So let me mention that Dave Brill did a wonderful model review. The silent auction had many other fantastic items - in addition to the Kawasaki book I had mentioned previously. Indeed, I couldn't restrain myself and did buy a second book: a signed copy of Akira Yoshizawa's "Origami Museum 2" - how was I supposed to resist? The organizers also went out of their way to make things as easy as possible. For example, the welcome pack included a plastic box for storing the folded models, and they printed a convention guide including maps of both Edinburgh and the convention venue, all sessions and the rooms they were held in, etc. What more can you ask for?

And it was my first real convention since having a baby. We had been to the Freising Convention 2012 for two hours or so - Felix hadn't even been two months old then - so that doesn't really count. But this time round my husband and Felix joined me, and Ulf did take care of Felix during the convention, so that I could enjoy the convention and not get too distracted by my loved ones. I did skip the late-night folding sessions, though. We also stayed at a different hotel, as we explored Edinburgh the days after the convention. There's something to be said about conventions that move from city to city each year. It gives you the great opportunity to see so many nice places - and Edinburgh is definitely worth a visit. In particular, I really liked the location of the convention, right in the city center. It made it both really easy to get to the convention, and to combine it with a family vacation. It was lovely having the two most important people in my life with me at this convention. I had always wanted to go to Scotland, and this first trip has made me hungry for more. More origami, but also more Scotland!