Convention: Fall in Oxford, A Week of Talks and Folds

“Ooh, this is the right welcome to a meeting”, I said to myself, as I walked along Giles street toward St. Anne’s College. The noise was overwhelming, and a big crowd engulfed me, since a fair has come to town! Attractions of all kinds were spread along the street, hiding the famous features of the buildings behind them.

This is my second time to attend OSME. The first time was four years ago, just before a JOAS convention. This one is preceding the BOS autumn convention. For me, this is an opportunity I dare not miss.

What is OSME? Officially it is about the common area between origami and one of the next: Science, Mathematics and Education. In reality, it also includes Art, Design, Engineering, History, and Technology. In fact, it seems this time that education is discussed less than the latest subjects.

The talks present projects as well as research findings. The range is huge, and if this is a reflection of what happens when origami meets real life applications, we actually conquered the world. Origami is there for building light weight structures on the architectural scale, as well as guiding the dark material that is spread all over the universe.

The talks are given in two separate areas, although quite near each other. The facility is magnificent. We are housed in St. Anne's College, within walking distance from the center of Oxford. The buildings are beautiful, and the green grass under the huge trees adds tranquillity and opens your soul and heart.

Naturally, I spent most of my time in the education, tessellation and art and design sessions. The other options are more technical and deal with engineering, science and mathematic. Those sessions are about fabrications, simulations, rigid folding etc. To be honest, it is like there are two different meetings, since the hard stuff was presented mostly in the engineering buildings, outside St. Ann's College, five minutes away. You could hardly see origami people in those sessions, just as it was rare to see engineers in the history sessions.

Every talk is 25 minutes long with five more for Q & A. Each session comprises of four talks, sometimes three, and since each session follows a certain theme, people are encouraged to stay for the complete session.

I preferred to stick to a session and to listen to it as a whole. It saved time and minimized the pressure to go to another building. Making a living out of metal origami, I attended a talk titled The Mechanic of Metallic Fold, given by Martin Walker. This talk showed me how far I am from the academic world. In short, the presenter managed to devise a formula that calculate the length of L. If a flap of metal is longer then L, trying to unfold a crease in the metal will only bend the flap. Using a shorter flap then L will cause the crease to unfold and the flap will stay flat. The phenomenon by itself is straightforward to understand, and quite familiar to anyone who does fold metal, but now there is a way to calculate it. Although I will never be able to calculate it by myself (not understanding any of the integers used in the formula, but the L…) I now know that there is such a formula, and I know how to contact the engineer who developed it.


The Mechanic of Metallic Fold

More interesting and understandable to me were the “softer” issues, such as Origami Parallels in Textiles and Fashion, about the similarity between fabric smocking and paper tessellations, presented by Adrienne Sack. She showed us that fabric tessellations can achieve the exact structure of paper tessellations by using a needle and string to join specific points on the fabric. It was intriguing to see that many so-called “new” paper tessellations were designed and made by stitching hundreds years before. 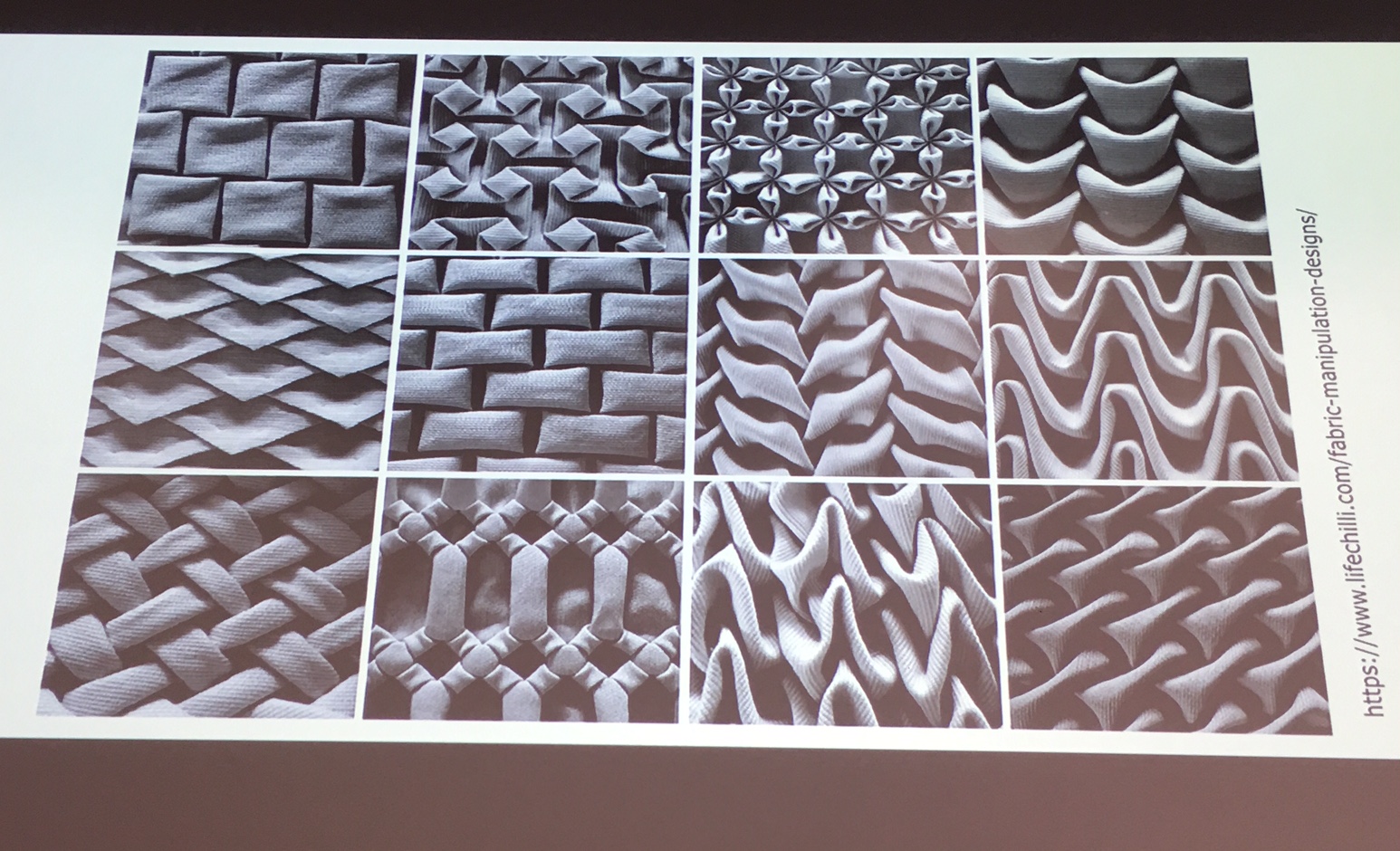 The education sessions were useful and interesting, as always. The talk titled Recreational Folding in the 20th Century: Between Row and Gardner took us back around hundred years ago. Michael Friedman presented the early history of mathematic education in kindergartens led by Froebel, as a result of a deep research process, and clarified the importance of the major players in this field.

For me, the biggest appeal is the BOS convention that followed 7OSME.

It was my first convention in the U.K.. Having two annually, each one is shorter than the other international conventions I attended in the past; only two days, and more sadly – a single night.

Starting on Saturday morning I already enjoyed the experienced way the British managed their day. After a short introduction by Tony O’Hare, the two guests of honor, Alessandra Lamio and Alessandro Beber were interviewed by the new president of BOS, David Brill. With his sharp, yet gentle approach, he managed to introduce the guests and their work without the pressure of preparing a talk and presenting it. I learn from every convention I attend, and this is definitely an idea I am going to use in our future Origamisrael conventions. 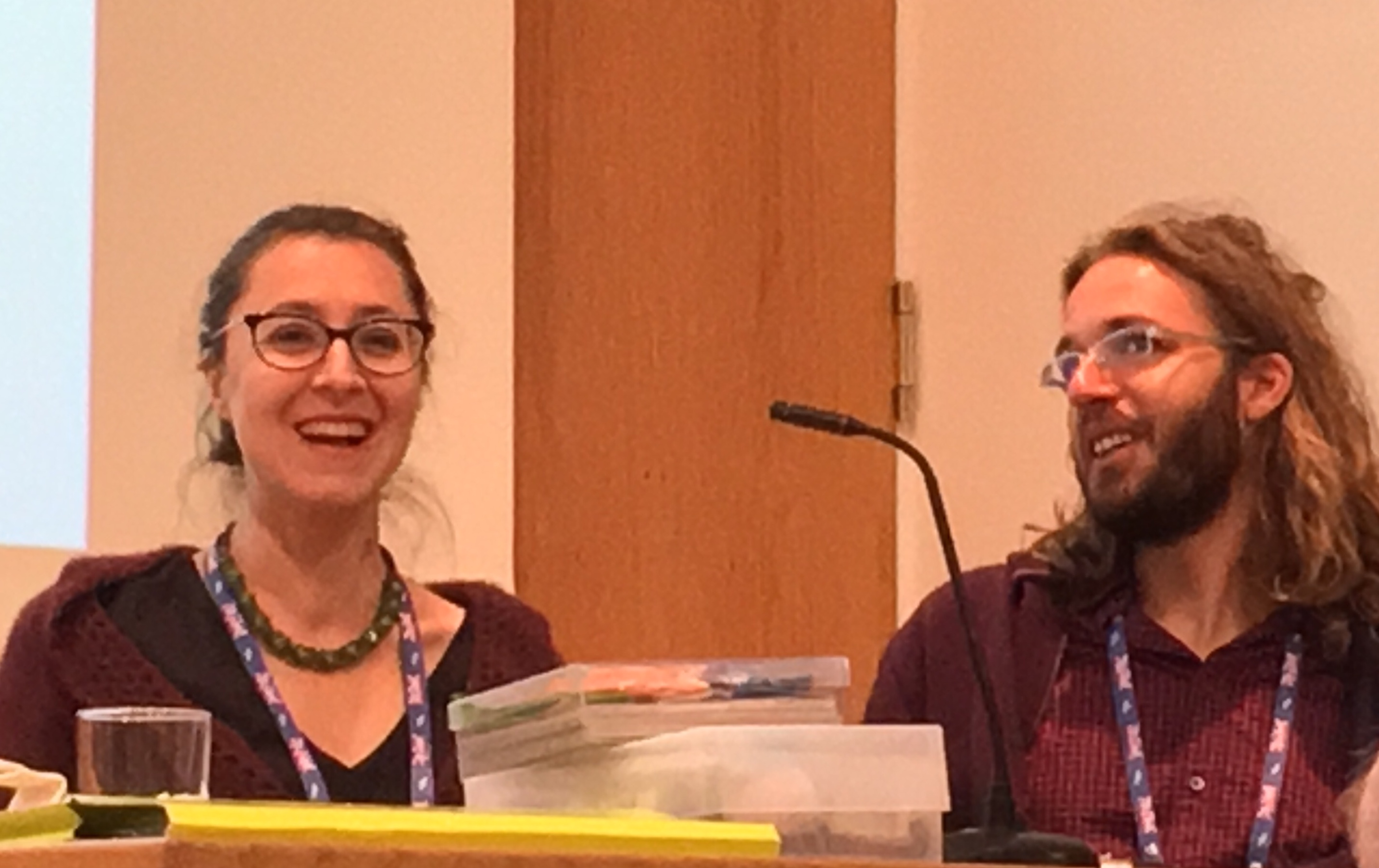 Right after a tea break (you wouldn’t expect it any other way…) the workshops started. Since I learn more from teaching than taking classes, I offered to give three workshops and agreed to participate in a panel about tessellations. Having only two slots (morning and afternoon) a day left very little time to learn anything. My workshops included tessellation, modular and puzzles. The first two were proper teaching, and both went extremely well. The participants were above all polite and quite eager to learn and quick to understand. I mostly enjoyed the kid who finished his 2x2 project just as I finished teaching the single molecule of the cube tessellation.

I had more joy in the Magic Flower workshop, since Riccardo Foschi managed to improve the lock of the units! My last workshop was about paper puzzles, not the usual topic for a workshop. For a long time now I had the theory that origami people share many similarities with puzzle lovers, since we both try to overcome the challenge in front of us – to construct the wanted figure. As always, the participants solved most of the puzzles and supplied me with some new solutions.

The last activity I participated from the stage side was the panel about the future of tessellations. With Alex Bateman chairing cleverly five speakers, each of us presented his/her unique perspective about the subject. Alessandro Beber talked about his flat twist works. Alessandra Lamio told us about the volume she seeks. Hans Dybkjær explained his technique, and Robert Lang presented the mathematical as well as the methodical ways he tackle the issue. I talked about applications in the design world: paper lamps, concrete tiles, metal art pieces and brass jewelry, all based on my paper works.


Left: Setting up for the Panel. Right: Panel on Future of Tessellations. Photos by PW-I.

After 15 international conventions I reached a point when my biggest motivation to attend another one is meeting people. It is good to meet old friends and it is even better to find new ones. Giles Towning is a good example. Unknown in Israel, I found him to be just like his models, creative, sharp and funny. Is there a greater joy than finding a meter-long retractable measuring tape made completely out of origami? Actually, there is! Can you spot the googly eyes spectacles paper model in the photo of Giles' exhibition?

Again, an OSME event joined to an origami convention proved to be unthinkable to miss! My deepest thanks to all who made this happen!