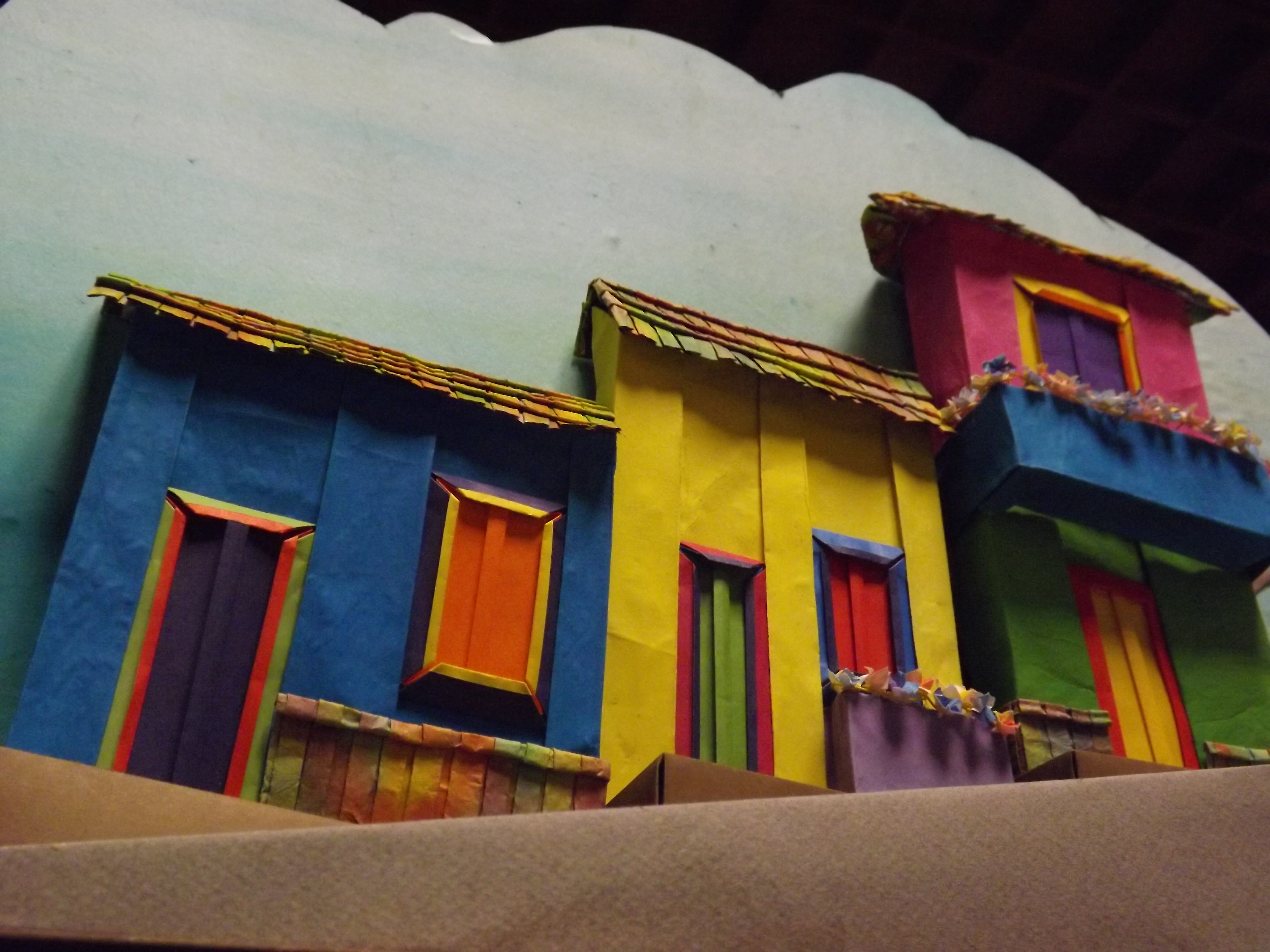 The origami composition that represented Origami Colombia 2013, styled after an artistic district of the city of Cali and displayed in the exhibition, by Jaime Diaz.

My name is Malachi Brown, but you can call me El Gringo Loco. I would like to tell you about my experience at Origami Colombia 2013. I'm not the adventurous type and my Spanish skills are minimal, but in November, 2013 I found myself on a plane heading down to Cali, Colombia to meet Jose Tomas Buitrago and other great paper folding enthusiasts. Origami Colombia is the oldest origami convention in Latin America, with 2013 being its 17th year. The convention attracts a devoted following from around the country as well as some international guests.

Upon arrival at my hotel in Cali I met with another gringo, Jeannine Mosely, struggling (through our reluctant ad hoc interpreter Mauricio Bermudez) to communicate with Elva Villegas from Venezuela, who speaks no English, but who has an unrivaled passion for paper folding. That was Thursday evening—and after a good night's rest, we got up Friday with no real plans until the afternoon, when the convention would start. However, Elva had some ideas based on her prior experience in the city, and she led us on a small excursion to some nearby stores that stocked some paper and other items.

Toward lunchtime we returned to the hotel and met up with Jose Tomas and Pol Henry Salazar. They took us around to a couple of other shops and a place to eat lunch. Along the way we found some interesting papers such as colored vellum and kaleidoscope packs of origami paper to bring home. Over lunch I tried to explain to Pol that I am a "loco gringo" but he corrected me and said that I was a "gringo loco." For the rest of the convention, "gringo loco" became my nickname.

Eventually it was time to head to the Comfenalco Valle building where the convention was held. It was easy to see that paper folders are pretty much the same everywhere. We are all hungry for new models to fold and paper to play with. While we waited for some things to get organized, I started teaching some models like Carmen Sprung's Stern Felix and Manpei Arai's umbrella spinning top to eager attendees. Then I started setting up my models in the exhibition,

After the opening ceremonies and introductions, I finished setting up my models and admired the many interesting models. I had printed little signs in English and Spanish, indicating that people should feel free to handle my models. While I was setting up, I talked to so many people who were interested in the models on display. Everyone loves action models, and there was never enough time to talk to everyone! 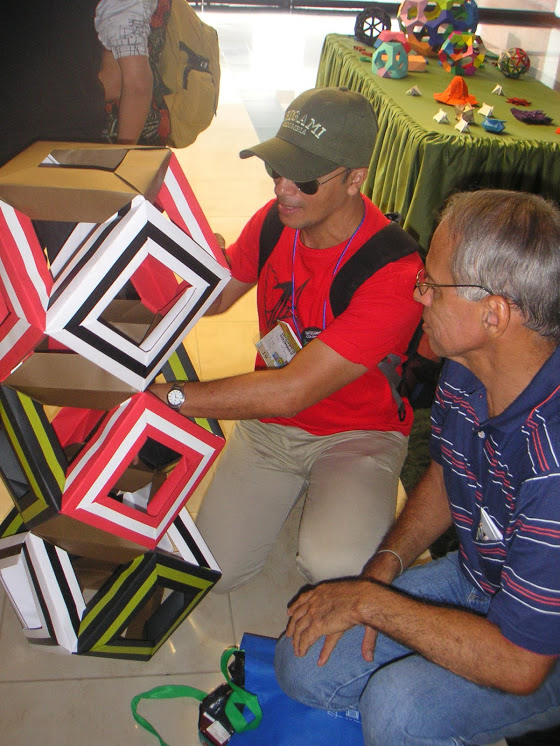 An example of a large origami model being assembled for display, folded by Jaime Diaz. 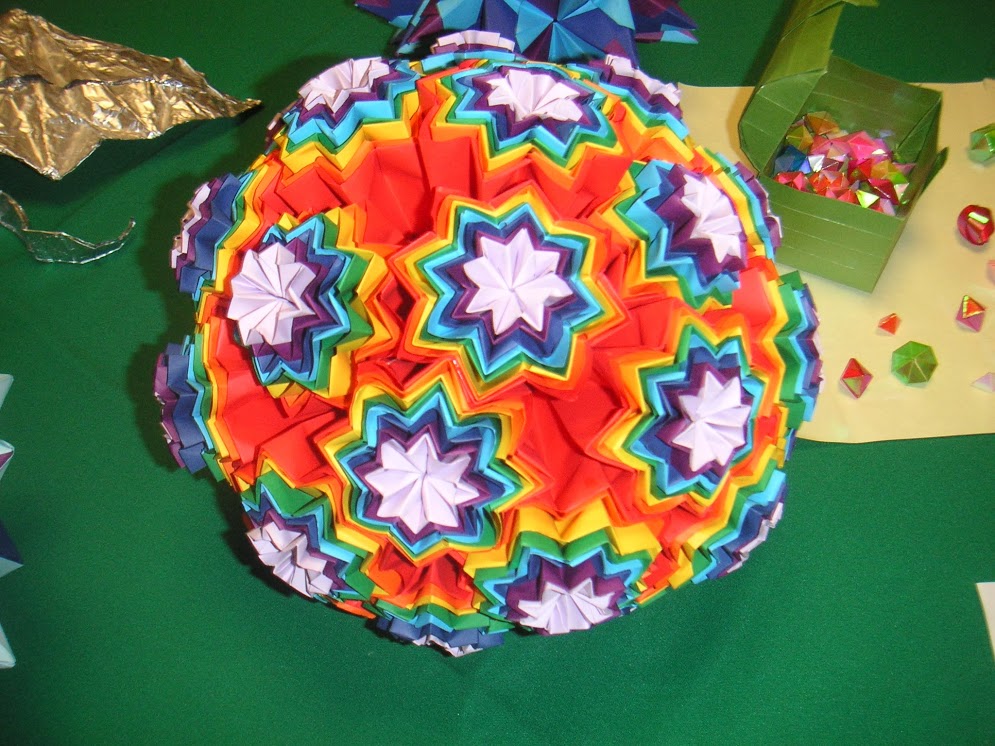 A very elaborate modular model, with a treasure chest full of many tiny gems in the background. 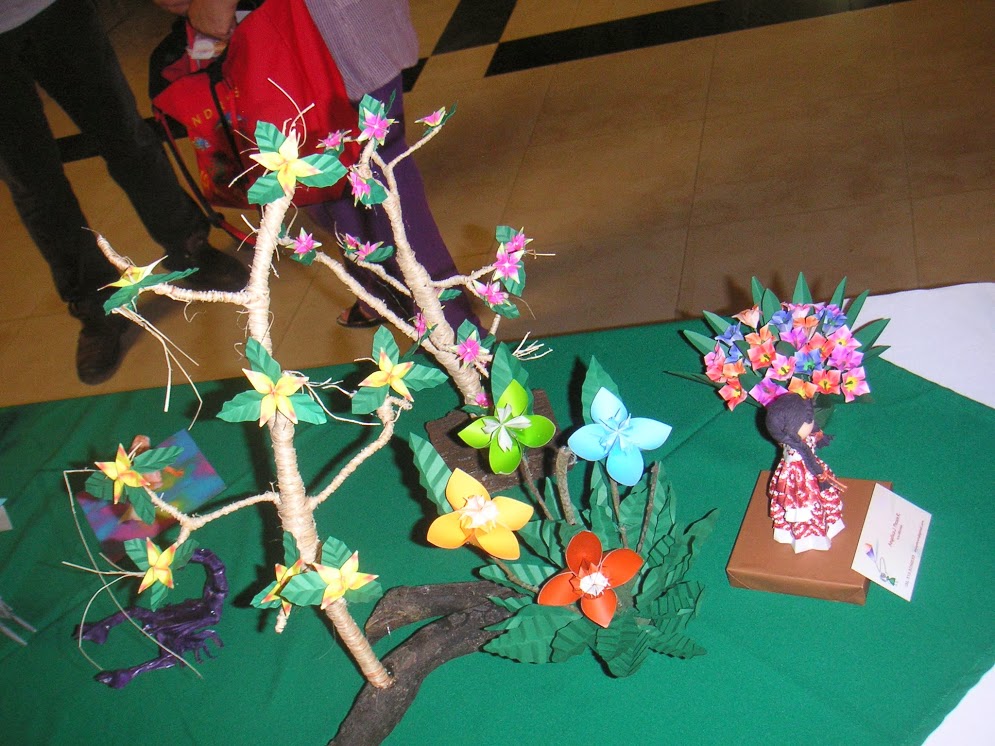 The other models in the exhibition ran the gamut from modulars, tessellations, and corrugations to elaborate displays of representational models. There were several models that were impressive for their large scale as well as displays that showed great attention to detail—all in all, a very pleasing array.

Eventually we headed back to the hotel to order some food to be delivered and to fold more paper. I started teaching the hydrangea to a few interested people while Jeannine started working through how to teach her bud without a template. I went to bed at midnight, and I was up again at 7am to get ready to go teach my first class. I did not have time for breakfast, as the convention was underway! Ticketing was similar to the ticketing system at the Origami USA Convention, although the convention is much smaller so there seemed to be less competition for classes.

Over the course of the convention I taught four classes: Goran style pleating and Christine Edison's Oceania box, paper airplanes, Sergey Yartsev's tortoise, and spinning tops for a total of five hours. It did not leave a lot of time to attend other classes, but those that I did attend were good, including different paper airplanes class and an octagonal flower. Most time slots had six classes available, but each day had one hour where a room was left open for "espontanea" or spontaneous teaching. I ended up taking advantage of this time to teach some extra models like Carmen Sprung's carambola flower and Stern Felix, and learn a few as well, including some interesting Sonobe unit variants. I found most of the classes reasonably easy to follow, but I did pay extra attention to the teacher and the students around me in order to reduce the translation load. In every class, there were a few attendees who could translate for me, so language did not pose a large problem. I also did my best to pick up some common origami terms so that I could communicate a little more directly, which was quite entertaining, partly due to my broken Spanish. One particularly novel session was taught by a member of a local group of blind folders. I was told that in some years they have had sessions where the students are invited to fold blindfolded to simulate that experience.

Saturday night I participated in an informal chocogami competition. Each participant receives a little chocolate bar, which comes with a random collectible card with a photo on it, mostly of animals with some celestial objects as well. The contest runs for 20 minutes, during which time participants have to open their chocolate and improvise an origami rendition of whatever is the subject on their card ... using only the chocolate wrapper for materials. Mine was a pangolin, an armadillo like animal covered in scales and notorious in its complexity as an origami subject. I did my best to rise to the challenge with a tessellated pattern aimed at creating the look of the scales, taking inspiration from Eric Joisel's rendition. Some of the models made quite inventive use of both the outer foil wrapper and the inner glassine wrapper. 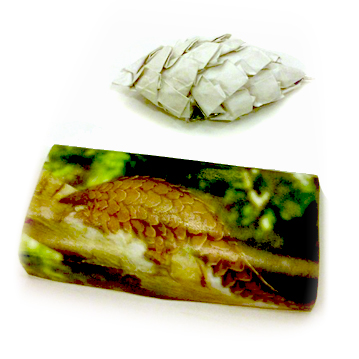 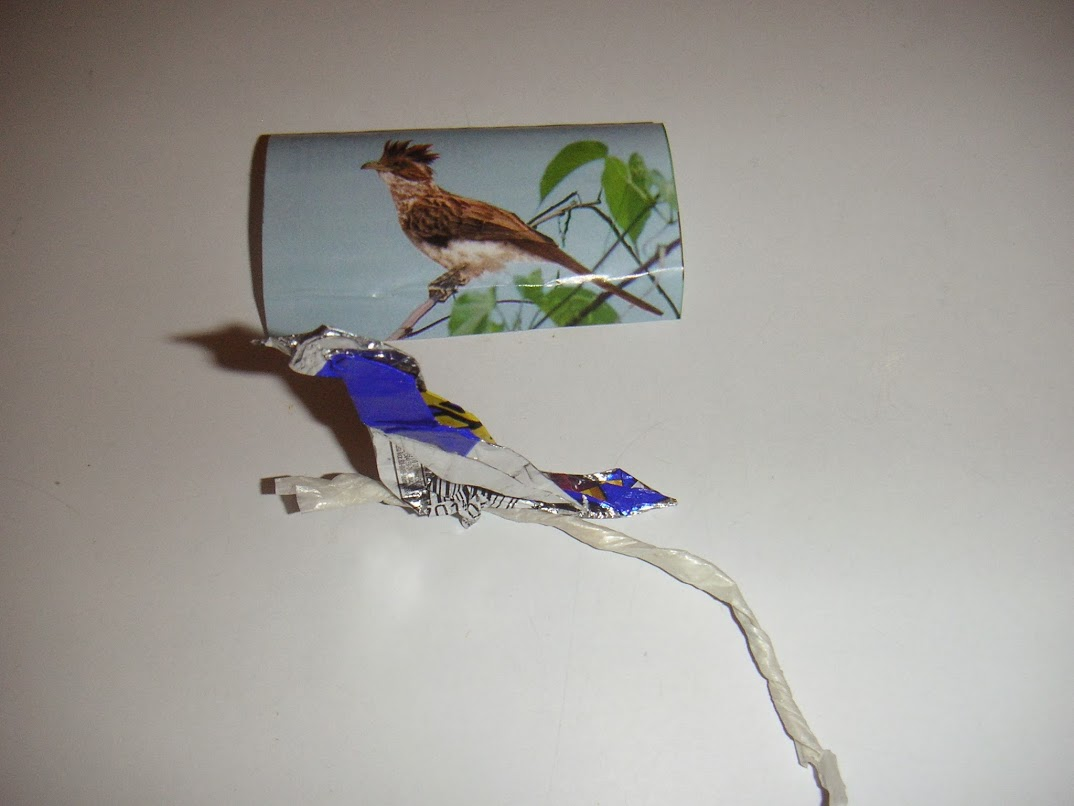 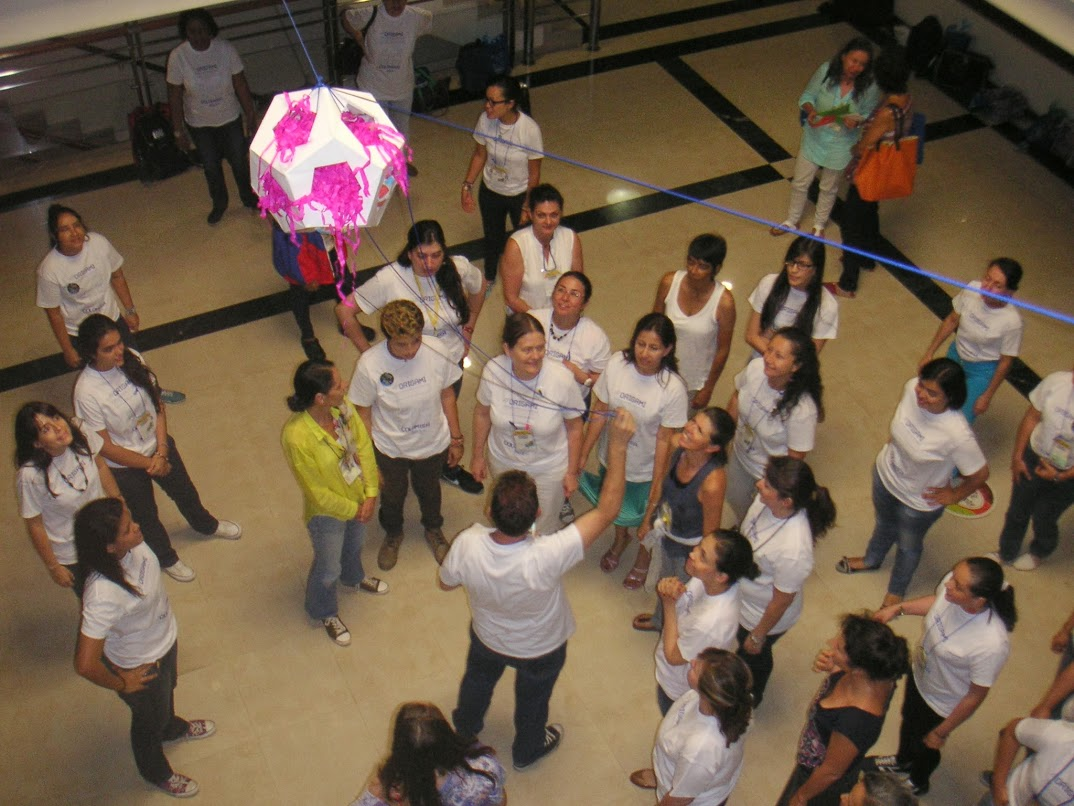 The women's group just before the breaking of the piñata.

Sunday was similar to Saturday, but this time I made it in time for breakfast. Again, I taught and attended classes, then spent time teaching ad hoc classes in the lobby. Sunday also featured the piñatas, a very chaotic tradition where a "piñata" made from a giant modular origami model with various colored ping pong balls inside is broken, and people scramble to grab as many as they can to redeem for prizes, such as origami books, paper, and tools. The event is run three times, once for the men, once for the women, and once for the blind (and sighted individuals who want to wear a blindfold). After being warned several times that I should leave my glasses with someone else so they would not get damaged, I decided to observe instead of participating. After watching the event, I believe I made the right choice for myself, as it was a little too crazy even for me, gringo loco!

As activities wound down on Sunday, it began to feel like a family reunion. Many group photos were taken, including photos of everyone in attendance. At the closing ceremonies we were treated to a demonstration of several traditional dances before finally ending the official convention and retiring to the hotel...to order some dinner and fold more paper. 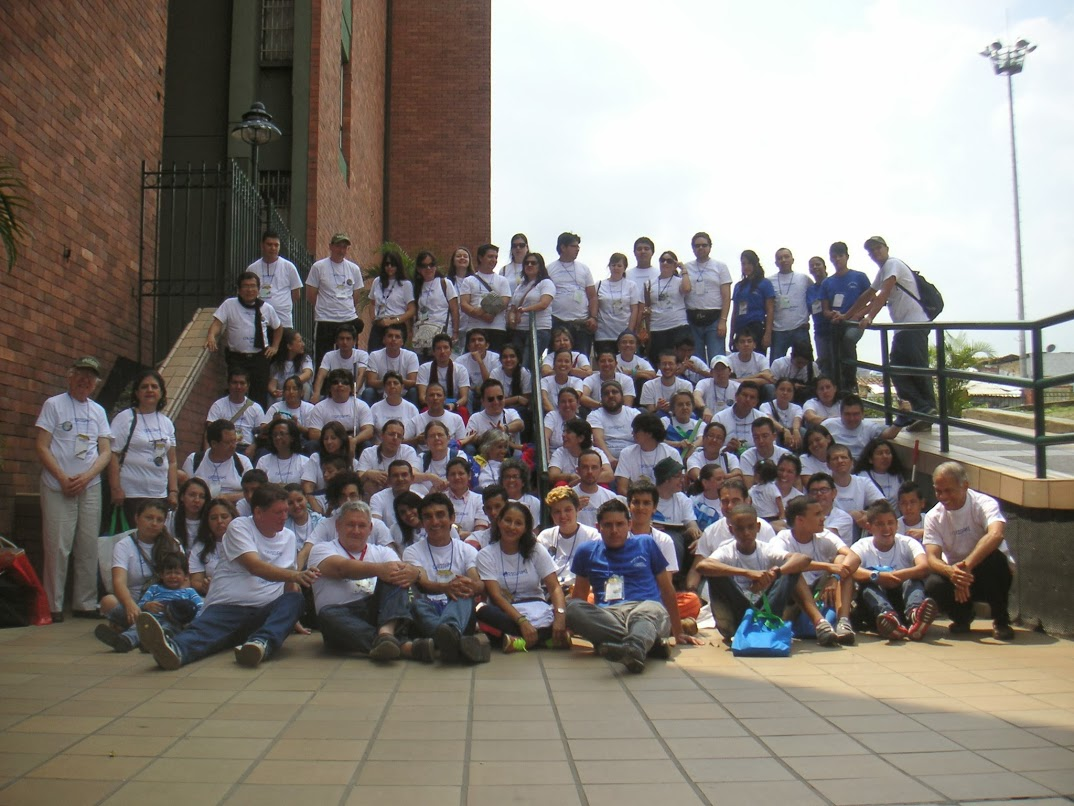 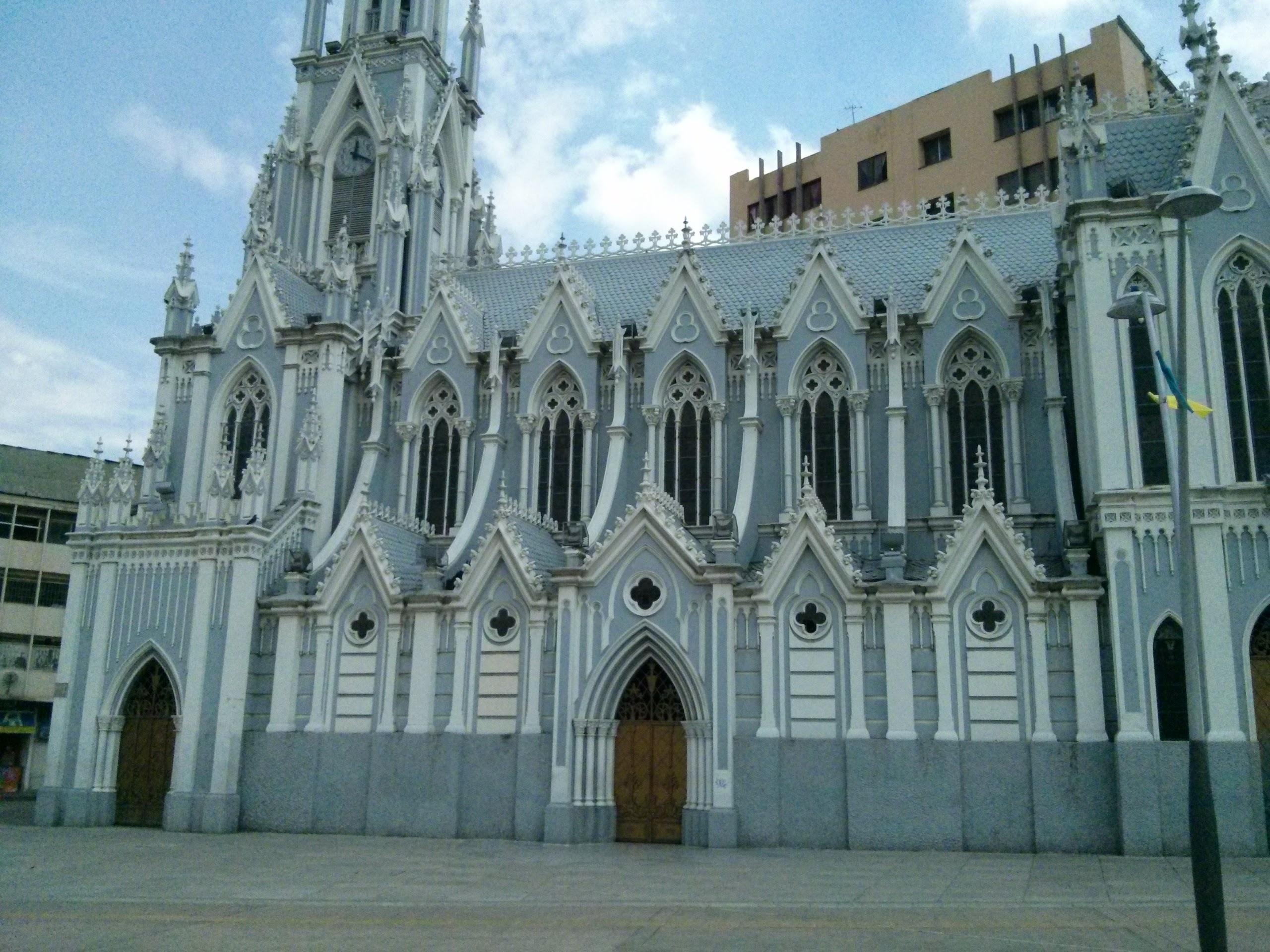 Monday was a national holiday and after a large group breakfast, many people bid farewell and headed home, but a group of us, mostly from out of town, were led on a walking tour of some parts of the city. Along the way we learned some history about the city of Cali and saw some interesting buildings and locations including the old city hall and La Ermita Church before having lunch at a small cafe... during which I taught Carmen Sprung's stern Felix again. Doblar (Fold)!

After that there was not much to do except head back to the hotel and start packing up... and fold more paper. We stayed up until 1am folding and talking, only to get up at 5am to head to the airport. On the flight home I had to put all of my newly acquired books in my carry on bag in order to keep my checked bag under the weight limit. After jumping through the various hoops at the airport it was time for the flight back home.

I had a great time and I wish I could go back every year. Someday, el gringo loco will return to Origami Colombia, but until then I highly recommend the journey to anyone who loves paper folding and who has the least bit of adventure in his/her heart. Origami Colombia 2014 will be held on November 14-17, 2014. To help you prepare, here are a few Spanish terms for paper folding: 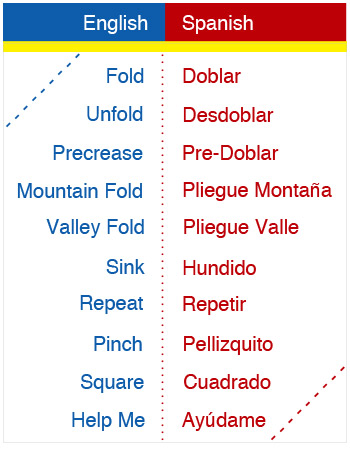