Precision is for the weak!

My train was due to leave at 07:20 from the Grenoble train station to Lyon, starting my trip home, after attending the Ultimate Origami Convention. I looked in horror as the clock counted 29 ,30, 31, 32, since my next train was scheduled exactly 15 minutes after. Yet, there was no need to worry, because, as the OAS (Origami Always Succeed!) Spanish members taught me, precision is for the weak, and the next train was delayed. I reached the plane on time, and now I have the time to summarize it all! 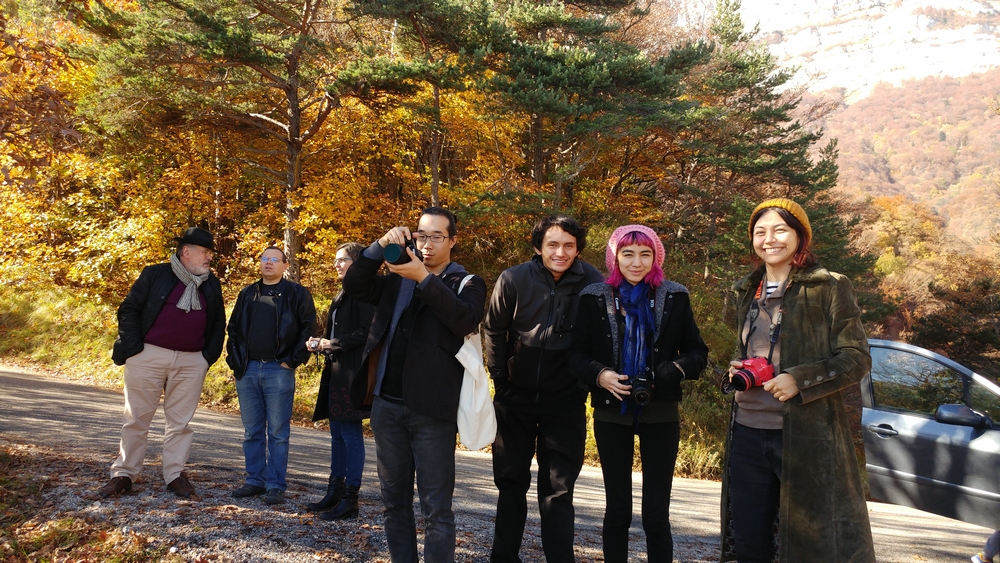 OORAA (Organisation des Origamistes de Rhône Alpes et d'Ailleurs) is a group that has a single goal: to make the Ultimate Origami Convention happen! That is why Nicolas Terry, as part of OORAA, has very little time to be with any of the convention participants. To compensate for that, he invited the guests of honor and David Brill to his house for a few days after the convention to have time to relax, enjoy the valley and mountains of Grenoble, and to visit the Holy Grail, the heart of it all, the Origami Shop. For most of you, it is only an Internet site, but for those who have been there, it's pure heaven!


Papers all over, inside the sacred Origami-Shop.


Dinner at Nicolas' house was a traditional racket. A huge steaming bowl full of potatoes dominated the dinner table, and under it, there is a place for eight small shovels, on which you can put cheese and sausages. The heat melts the cheese, and when ready, you slide it on a hot potato.


A steaming bowl of potatoes.

The house is full of models he has collected through the years, a huge library of books, Lego models, and wooden cars. It also was was cozy, with three beautiful children (although we met only Jolly and Luei) and wife, and four origami guests: Gen Hagiwara, Dave Brill, Shuki Kato, and myself. Shuki's sisters accompanied him for their first European trip, and were there, too.

This may be the best way to conclude a convention. Postpone the “back to life” depression you must feel on monday morning, back at work.

Indeed, an intimating title! You must wonder what makes a convention an ultimate one. There are many factors for judging a convention, but the first and foremost is the workshops. Usually there are five invited guests at the UOC. This time there were six: Shuki Kato, USA; João Charrua, Portugal; Gen Hagiwara, Australia; , France; Giang Dinh, USA; and me, Israel. For sure, there is no other convention with such a variety of invited guests.

Workshops are two and a half hours each. You probably noticed that the guests are from the high intermediate to complex levels. For me, such long classes were an opportunity to go deeply into the details of my work. I enjoyed the fact I could explain at length the logic behind the model, and how one can find his own variations following the simple principles. The participants are well aware of the level of the models and workshops given here. There is a lot of pleasure in teaching such a high level of folders! For example, during the Cube tessellations workshop, all I had to explain was the single molecule way of folding and collapsing. The participants managed easily to fold the 2x2 without me showing the collapse process. 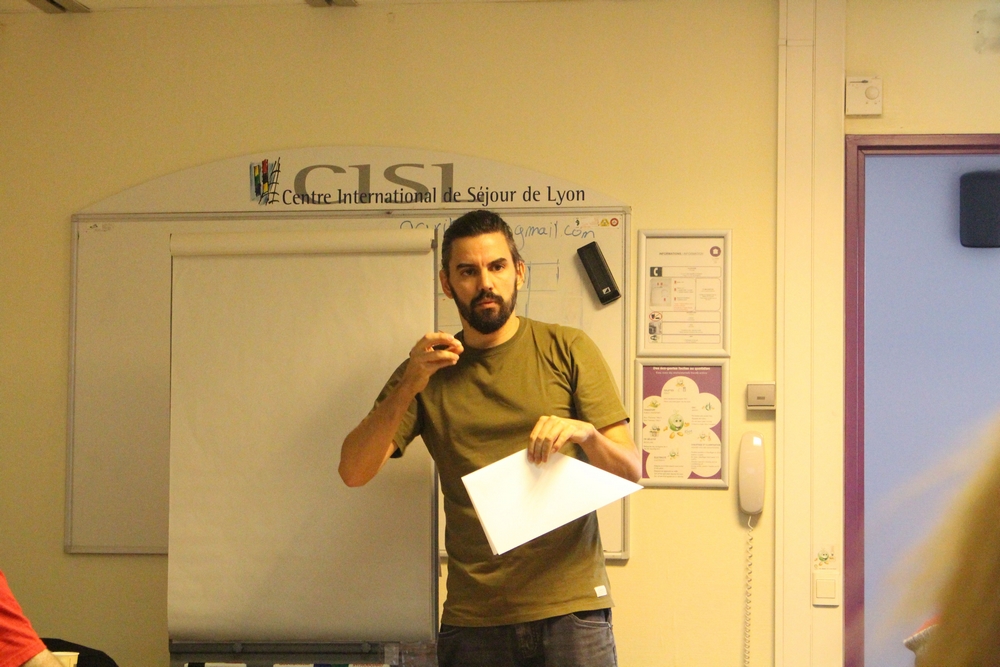 
I was amazed to see the younger generation's performance. There were many kids participating, more than at other conventions I have attended. Moreover, their level is astonishing!

I had the joy of participating in João's workshops and made Mr. Fish with him. Such a clever and artistic model!

If you had the strength of will, you could have participated at the Camel workshop by Shuki Kato. It took five hours, but the end result was a mesmerizing, detailed double hump camel. 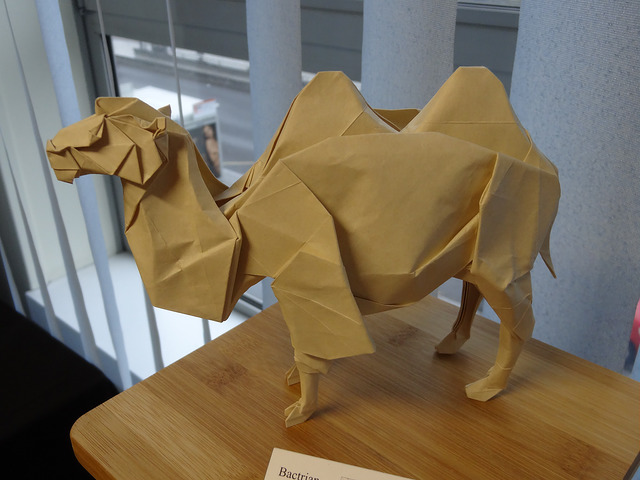 A breath of fresh air was the workshop af Alizée Glasser. Would you consider a starting point of a circled tissue paper and eight cuts as origami? And yet, Alizée's work is elegant, fragile, and fit perfectly with the ultimate title. 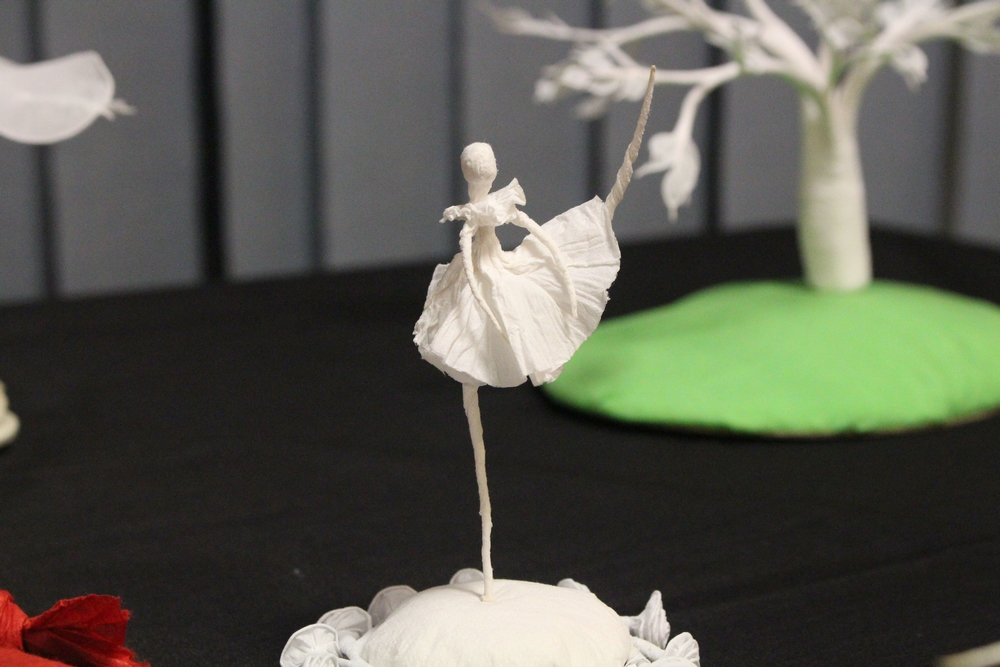 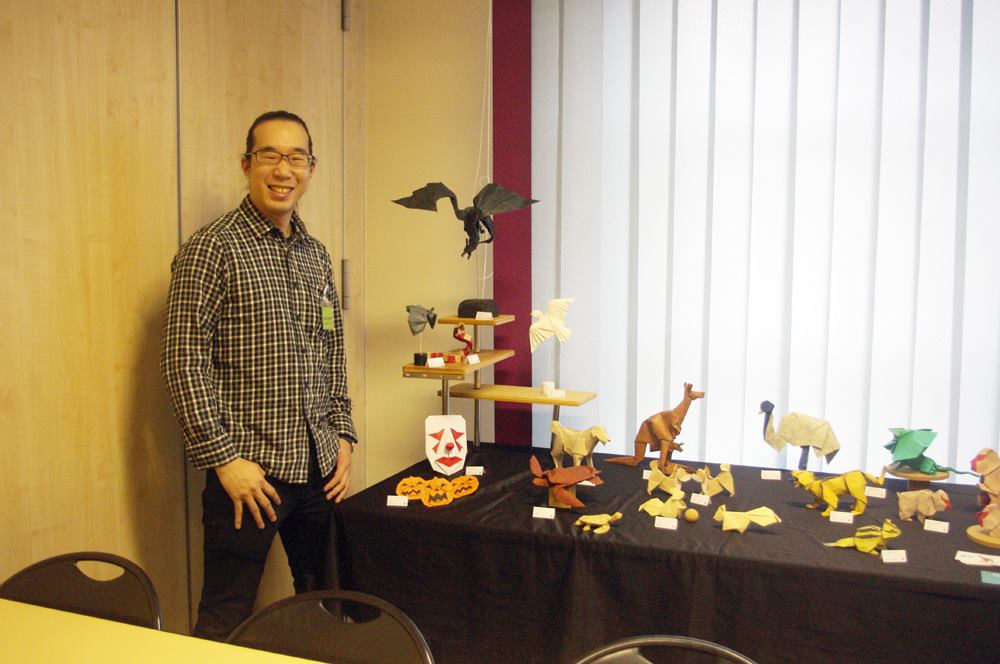 Gen Hagiwara by his exhibition table.
Image by Stassia Kato

I gave three workshops, one each day. The first one was about the Cube tessellations, and the final step was to create a real wooden pendant, in a brass frame I prepared in a mold shop, to fit the design of the pendant. At the Volume tessellation workshop I had the time to teach three of my tessellations: Templar Garden, Amsterdam and Hilula. The length of the workshop allowed me to go deeper and explain the details, as well as the creation process and how one can modify it to his needs. 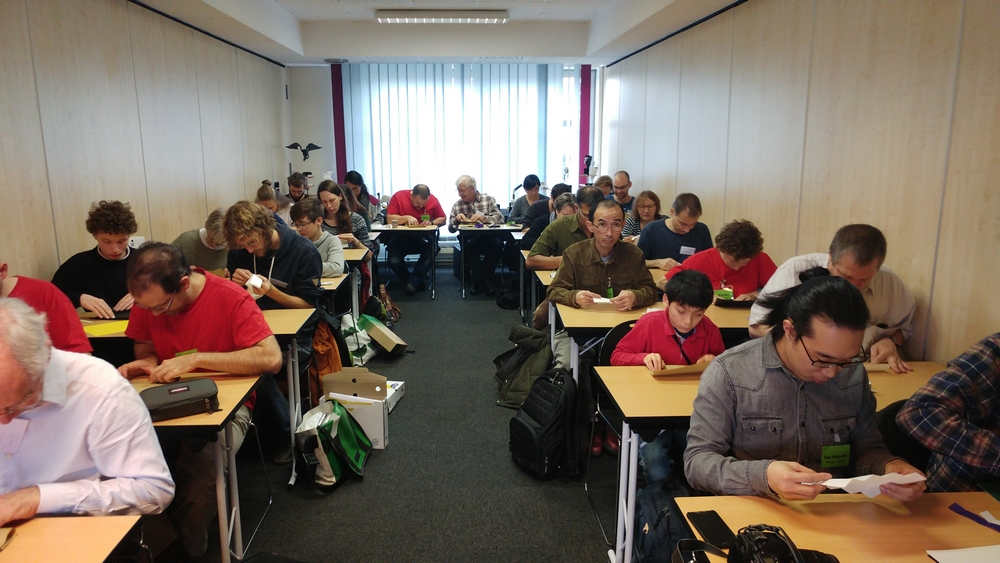 Cubes Tessellation workshop
The joy of having Gen Hagiwara and Giang Dinh as your students! 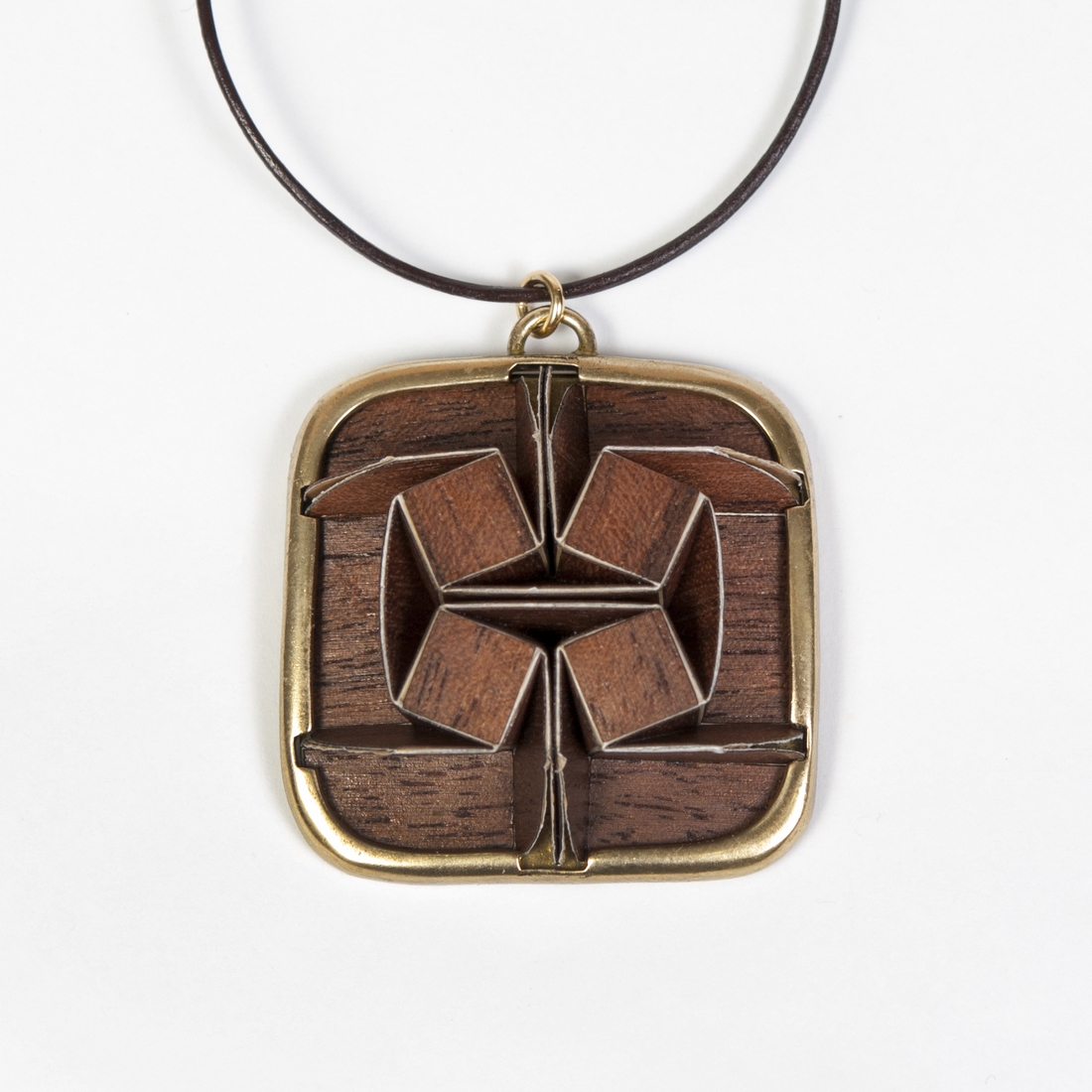 The wooden Cube pendant
The final goal of the workshop!

Last were the Kitchen models. I taught the Cake mold, (and l have already seen some cakes spreading on Facebook, made by Soléna Ascrabble and Karine Douillet.) We finished with the Braided Bowl, a high intermediate model, with a very high rate of success! 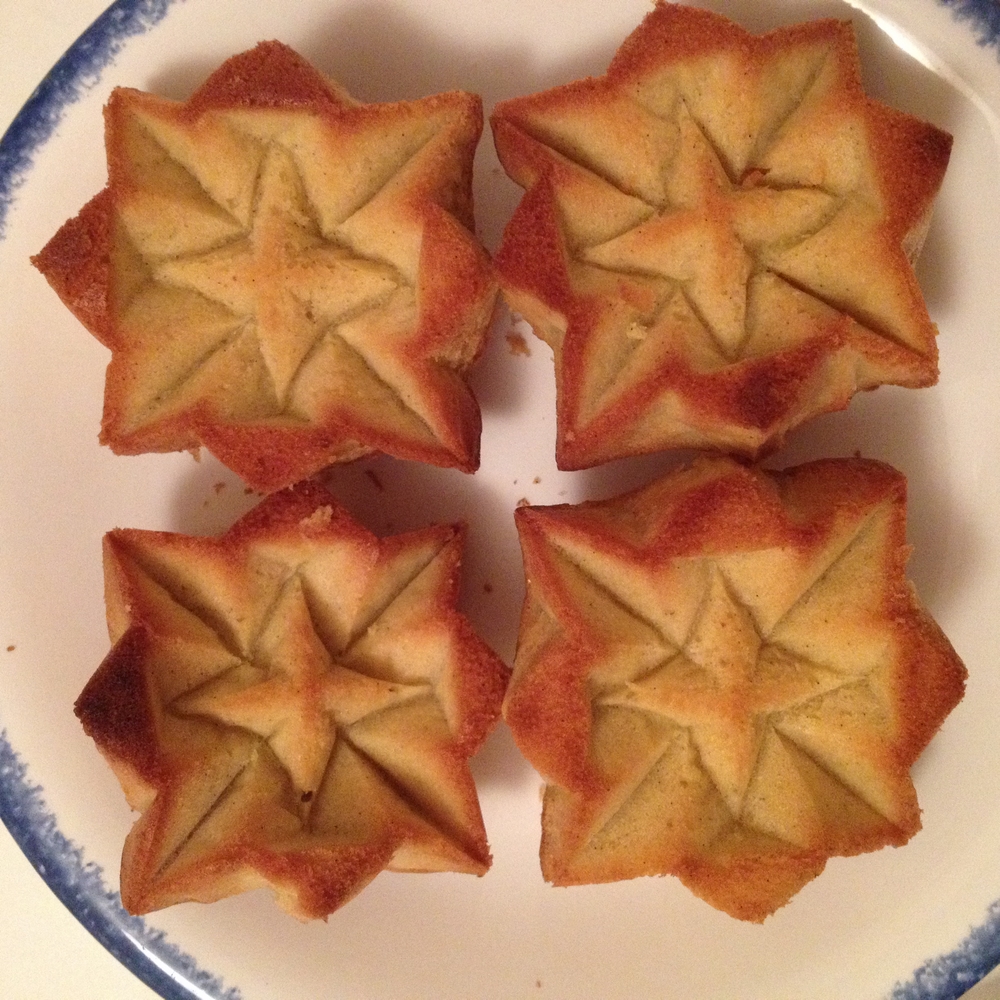 To be blunt, the origami part was good, but the food wasn't. The price of accommodation is low, to make sure this convention is affordable for a wide variety of people. With that low price comes the downside of simple, basic food. Yet, this downside actually stimulated interesting expeditions outside, as we explored the area to find some better culinary options.

On Saturday there is a market just on the other side of the street, and, like years before, we went out to explore and gathered to share at the meeting point all the food we had bought. 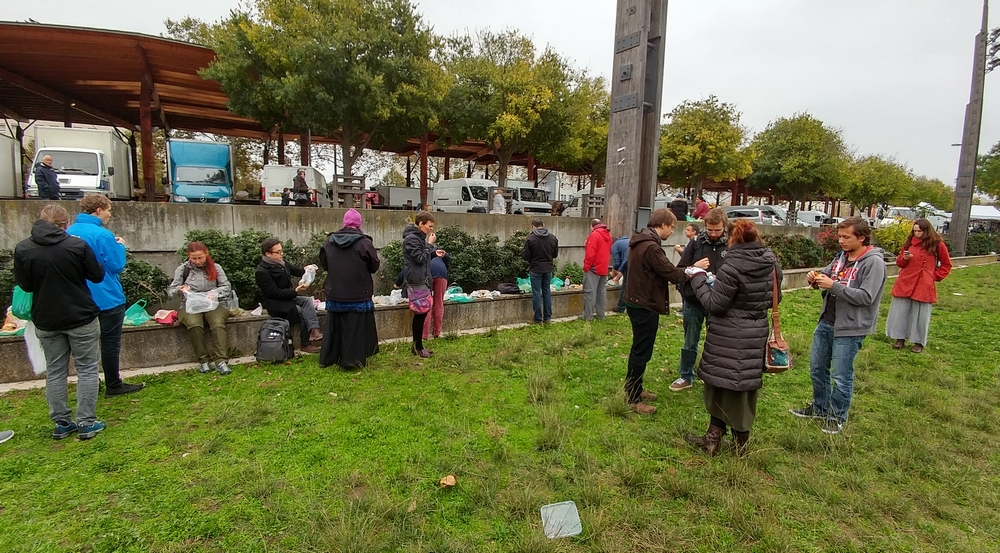 Fresh air lunch by the market

Do not be confused!

This is truly a great convention. With participants from Spain, Germany, the Netherlands and France, special guests from four continents, the mix of people is incredible! With a superb level of participating folders, a great Origami-Shop pop-up store, and a well organized and smiling, red shirted OORAA members – it is the Ultimate Origami convention!

I am still in a phase where I count my conventions. This one is my 13th. Many consider it a bad luck number; for me it was the best convention ever!