When last October Ilan Garibi invited me as a special guest to the second OASIS (Origami ArtistS of ISrael) convention I was really happy and flattered. It would have been my first convention outside of Italy, my first convention as a guest of honour and my first trip outside Europe. You can understand that my worries started soon after: I had to get my passport, inform myself about Israel, plan how to carry my exhibition models safely without destroying them during the trip, prepare at least three official workshops, prepare a conference on how I plan my models and find an alternative gift to my booklet (QQM #51 Mancinerie) since it was already been included by the organizers.

The first issues were easily solved: passports are ready in a short time (I write in the plural since my girlfriend Cloe was more than happy to accompany me) although I nearly did not manage to collect mine due to snow; Ilan suggested to arrive a few days earlier, to host us at his house and to be our tourist guide; the models are nearly all disassembled and placed in a box to carry as hand luggage and I soon had various ideas for the workshops. All that was left was the conference and the gift.

I was worried about the conference because I do not exactly see myself as a designer: I do not sit on my workbench and say “Now I want to create a polyhedron, a star or a box”. I usually pick up a sheet of paper, most times size A4, I play with the folds and I see what it's turning out. At first it did not seem to me as a good argument, but given the title of the convention, “Geometrical thinking in Origami”, I understood that my creative process would have been adequate since I anyway make use of the geometry of the sheet of paper and I have to think on how to finish certain ideas, or how to make use of certain techniques. I therefore selected some of the more meaningful models, prepared some slides with photos and crease patterns and even that task was done.

Only the gift was left. And just to contradict myself I start designing a model that would have allowed me to pay tribute to the country and the people that would have hosted me. I was lucky because the Israeli flag bears the Star of David which is a six-pointed star composed of equilateral triangles. It can be built as a modular origami and it does not create difficulties in placing 60° angles in a square.

By then all was ready, we only had to wait for Spring; the convention was between the 19 and 21 March of this year. We decided to travel on the 16th, a day that turned out to be cold and rainy both in Florence and in Rome where we had to transit. The flight was smooth and Tel Aviv greeted us with a wonderful sun, our coats immediately appeared unnecessary. Entry to Israel was swift, the time needed for passport control and to get the entry visa. Luckily they did not check the luggage otherwise we would have risked being blocked as smugglers of parmigiano and chocolate which we had brought for our hosts.

Ilan was just outside the gates waving his arms trying to make himself seen. He told us that he had just arrived after having driven at the speed of light since he had thought that our flight would have landed two hours later. We got into the car to drive to his house at Binyamina and, since we were ahead of schedule, we decided to stop by the beach of Caesarea to see the sunset near the ruins of a Roman aqueduct. What struck us during the journey was the greenery that surrounded us and the solar panels installed on all the houses' roofs. 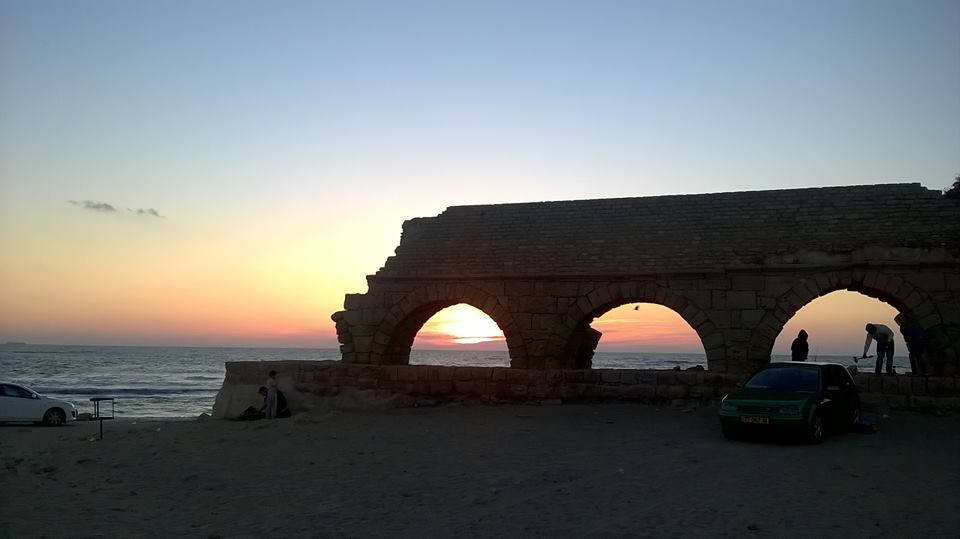 Sunset at Caesarea
Image by Francesco

Once the sun had set we traveled to Ilan's house where we met his wife Sigal and his daughter Tamar and we settled in our room. We began appreciating the delicacies of the Israeli cuisine at dinner and planned the two days available before the convention. In a country with a millennial history and a variety of landscapes such as Israel you are spoiled for choice. The first stop was Caesarea, one of the great cities of the ancient world that changed hands several times over the centuries from the Phoenicians to the Romans to the Arabs to the crusaders. The archaeological area has been subject to important excavations since 1940 and is now one of the most visited sites of the country. There were also the elections that day so it was like a festive day and we encountered many families visiting and even some shows in the amphitheatre. From there we went to Megido, also known as Armageddon, the place where the last battle on Earth will be fought according to the prophecies of John the apostle. The most suggestive part is the waterworks and its well that has been dug 30 meters into the rocks and leads into a tunnel 70 metres long. At the end of the visit we returned to the car, stopped along the way for a spectacular lunch in ethnic Druze style beneath mount Carmel and we ended the tour with a visit to Haifa where we saw a small part of the Ba'hai gardens. We had the time to make some shopping along the way home and concluded the evening playing with Ilan's puzzle.

It would have been a shame not to go to Jerusalem the next day. This time we had Sasha as guide. The time available was not much since we had to travel by bus and train but we managed to visit the old city which, apart from being a very ancient site, is a holy place that holds places worshipped by Christians, Hebrews and Muslims. Amongst these we managed to visit the church of the Holy Sepulchre, located in what is believed to be the Golgotha, and the Wailing Wall. In the cracks of its gigantic stones there are inserted lots of rolls of paper with prayers written on them. They believe that they have more chances to be fulfilled.

On Thursday morning we travelled to Ginosar, the location of the convention, on the sea of Galilee. The works were to start at 13:00 so along the journey we had time to visit Beit She'arim, a necropolis with 31 catacombs dug in the rocks the larger part of which could be visited. Before lunch and just close-by to the hotel we saw the remains of a ship dating to the times of Christ.

Once we made the check-in we moved to the folding room. It was a very large room with tables for exhibit models along its perimeter and other tables for folding activities. My space as guest of honour was close to the entrance. I began placing my models and reassembling the ones I had disassembled for the journey. My modulars immediately sparked curiosity and amazement, particularly Vertigo and Stella dell'Avvento. The participants started arriving gradually, the maximum capacity was fixed to 40 so as to have a collective and familiar atmosphere, an atmosphere which easily come to happen thanks to the admirable organisation. It was also easy for me since, apart from knowing Ilan and the four girls that had been to Tabiano the previous year, I also knew Boaz Shuval and Mark and Arlene Kennedy who had been to Vicenza and Herman Mariano and Saadja Sternberg who I had met in Tabiano in 2010. Everyone was warm and friendly. Even the language was not a problem, English is common amongst both young and old people and, when needed, there was always someone offering to translate.

My workshop was the second of the afternoon. The organisers arranged also for the paper but I had brought the paper from Italy, pentagons of Stardream for the Nico(let)tiana flower and handmade "peacock paper" for the Fortune pouch. The models were simple and the folders were of high level so we finished before time. But I had anyway decided to do more than the three workshops that had been asked so we continued with Modulosca.

As for Italian convention, apart from the official workshops there are the spontaneous ones and the after-dinner is left for free folding. At dinner we understood what Ilan meant when he told us that it would have been plentiful. It was organised as a buffet and there were so many things to eat both in continental and in Israeli style. We opted for the latter: the hummus, the famous chickpea cream, and the tahina, a sesame cream, they won our appreciations. After dinner we participated to a few foldings but we were tired and went to bed before midnight while someone was unrolling a coil of kraft paper to make a Curlicue with a strip of 12 metres.

The following day, after a similarly abundant breakfast, we got back to work. That morning I was to hold a conference and a workshop. My talk was not the only one of the convention, further four on geometric and didactic arguments had been planned. When it was my turn I began describing modular origami "my way" and revealed two surprises: the first was the model I dedicated to the convention, and that was named as Stella OASIS, and the second was the guests of the 2015 CDO convention in Tabiano. After the conference we moved on to folding the star. 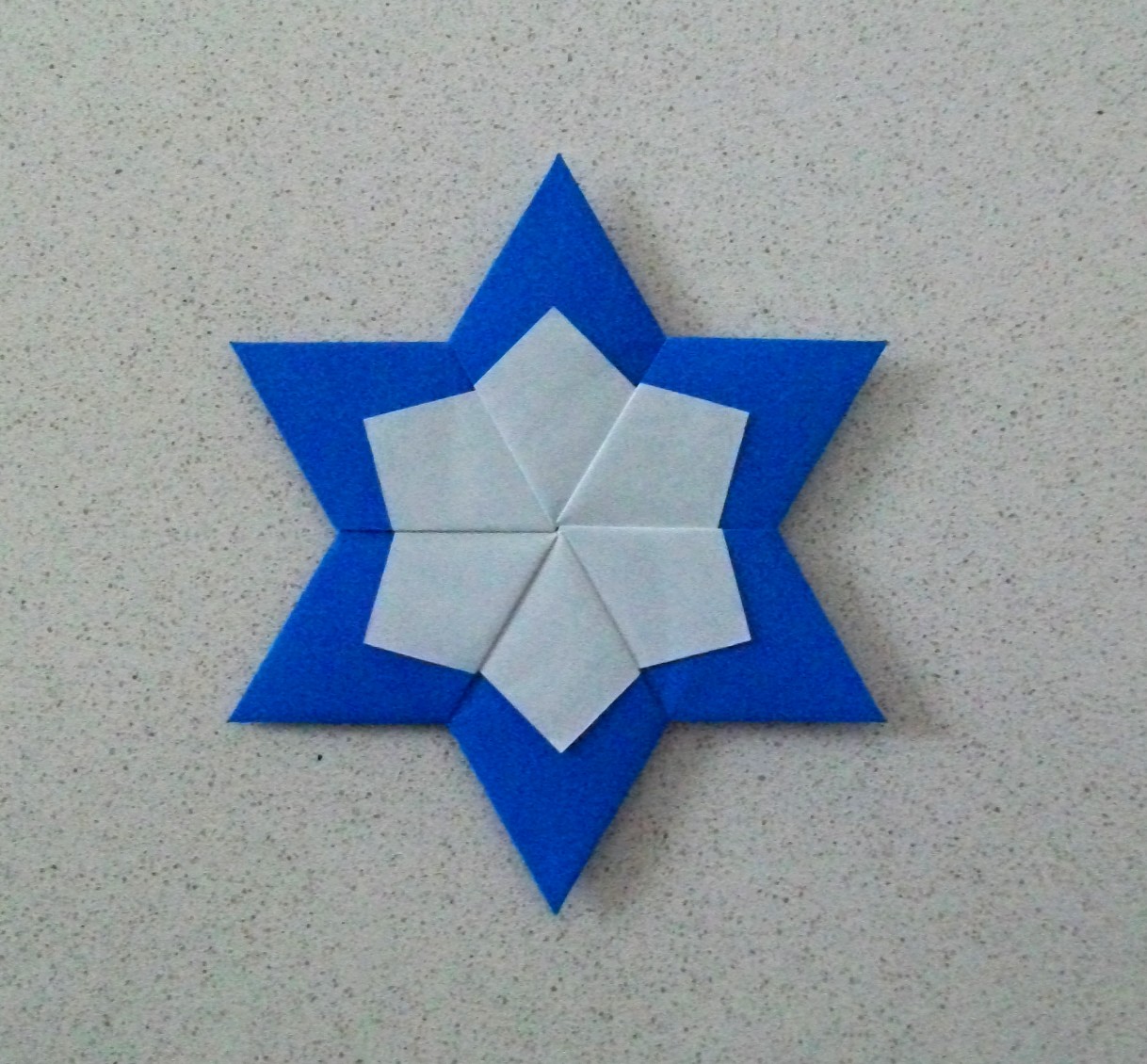 
Before lunch we had a group photo and afterwards we went back again to the workshops. My third official workshop was after dinner but I took advantage of this to improvise a workshop with another star and to do some origami with the children. One of them also interviewed me for a school project. There was also time to have a snack with tea, coffee and sweets, to learn something and take some photos of the exhibited models. One thing we found very nice was that those who had an exhibition after a workshop they added the model to the ones on their table. 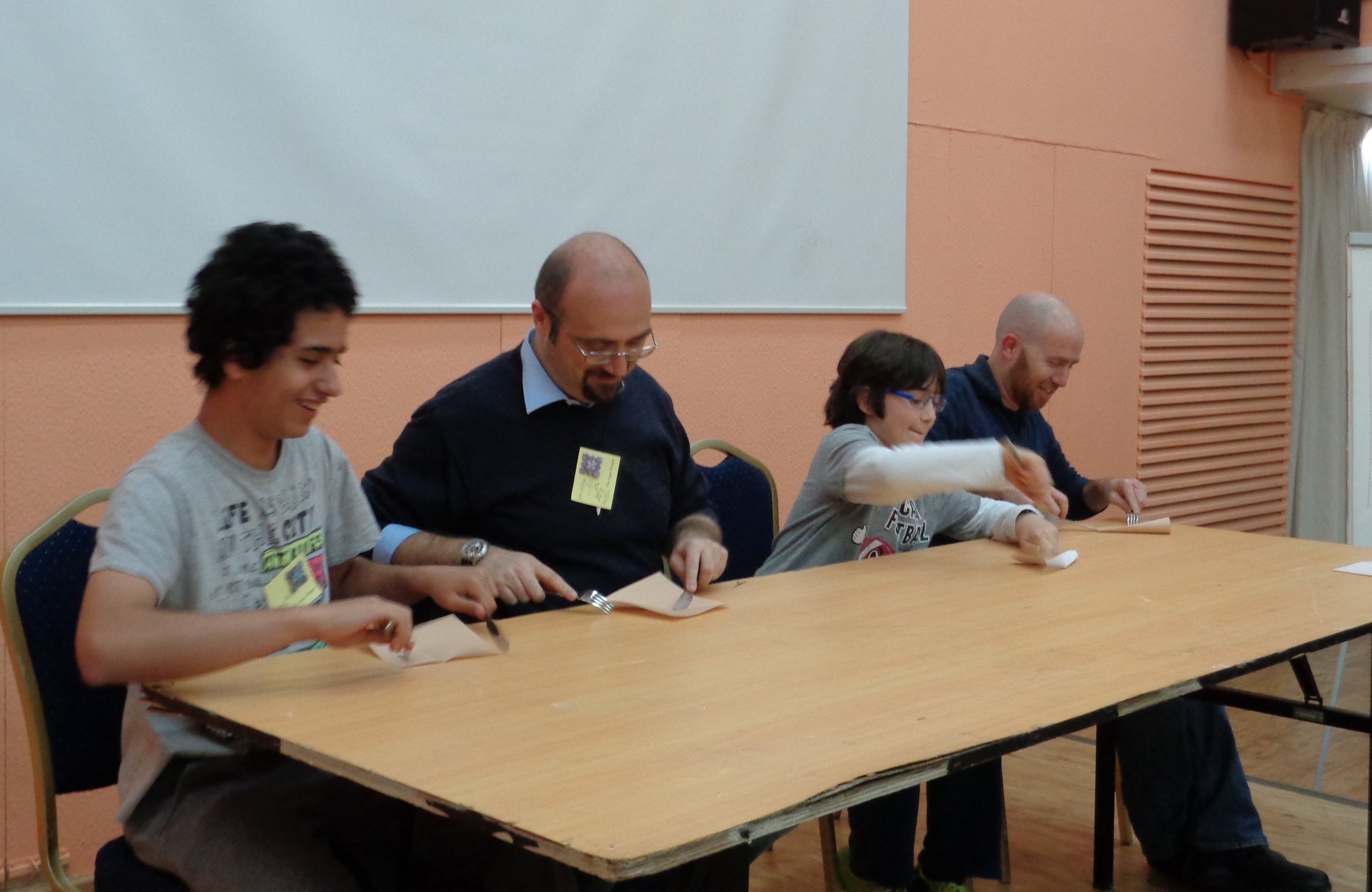 On the third and final day it was time to present the most complicated model, the Stella dell'Avvento. It was the first time that I taught it after having brought it to the CDO competition the previous year. The module and the assembly is not easy and in the bi-colour version 60 modules are needed. But this did not stop us because the final result was exciting.

The hours passed and we became aware that we were reaching the end of the convention. Some had already left to respect the Sabbath. A small group was left and I closed the workshops teaching the Box with a heart after which it was time for the goodbye hugs and kisses.

We left these new and old friends with tears in our eyes, they were three intense days, full of smiles, enthusiasm and memories that will be kept for long. But the trip was not over yet. That night we arrived in Tel Aviv at Ilan's brother who hosted us for the night. The return flight was at 5p.m. So the following morning we had time for a walk along a street flanked by Bauhaus-style buildings in the historical centre and to have a last stuffed pita in a market. The following days we kept rethinking of the time in Israel and kept repeating some words we had learnt. The most suitable to close this article is definitely Toda (thanks) to everyone.

Is it over already?

The most suitable to close this article is definitely Toda (thanks) to everyone.