Conventions: From Italy to Mexico

Chapter one - A Crisis is Solved

Every year it's the same – at the end of the year, I attend the CDO convention. Last year, though, a Messenger message shed a dark light on this simple rule. It asked if I would agree to be the seventh Mexican convention’s Guest of Honor.

Living in Israel, Mexico is two continents to the west. Not like a short jump to Italy, with five hours in a plane, but 17 hours in all. And the time gap, seven hours, means a huge Jet Lag. Add to that I do not speak Spanish at all, but you won't be surprised that I immediately said YES! Mexico, here I come! Sadly, I realized, this year I will have to skip the Italian one. Both are scheduled in November, two weeks apart.

But then I heard who will be the guests of honor in Italy – my dear origami friend from Brasil, Yara Yagi! I had never met her, and this will be an opportunity not to be missed! And wait, the second guest is João Charrua! We met once, and once is not enough! And Beth Johnson! I love Beth! The fourth is Roman Remme, without an exclamation mark yet, because he is still young and unknown to me.

As we Israelis face problems without fear, and being the start-up nation, I knew I had to solve this crisis smartly. The solution was simple – I would go to Pisa for the 36th CDO convention, return to Rome to meet my wife, fly to Mexico, travel around for two weeks and then attend the Mexican convention. Two flapping birds folded from the same sheet of paper! 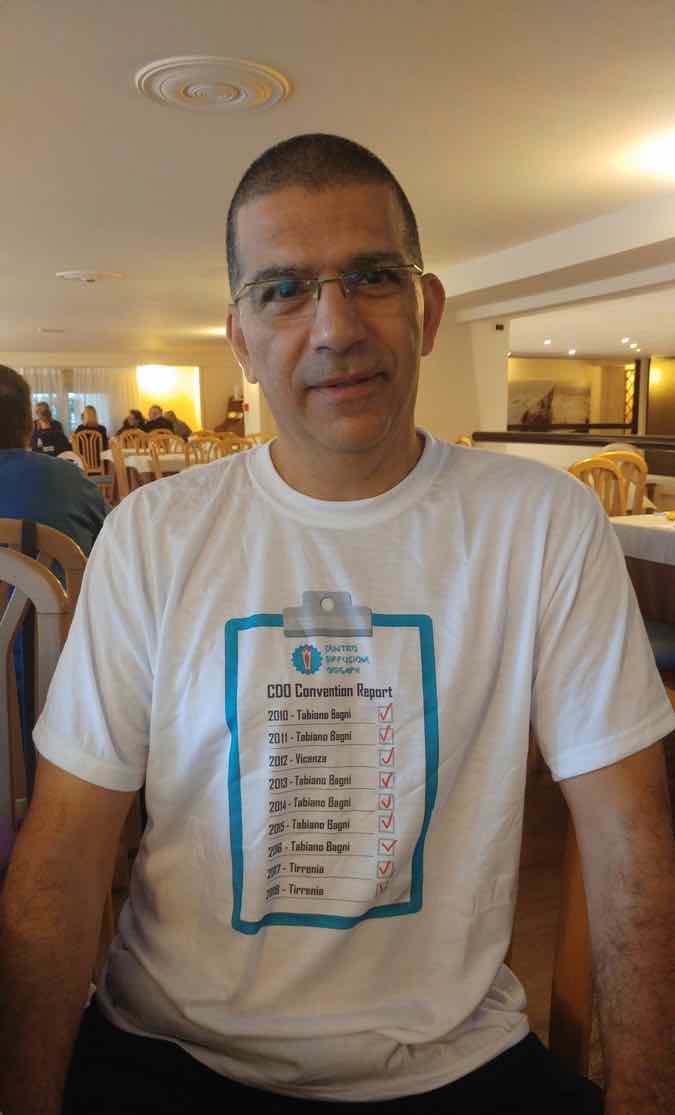 They say the CDO convention lasts four days. It is not true. It lasts a single day only, with a few short breaks to sleep. This is how you see it when Sunday evening is dawning. You fold, play, eat, fold, eat, sleep in a repetitive fashion that it becomes impossible to count the days. As always, or at least as the last eight conventions I have attended (see my shirt), the program was full with great models to learn from great teachers. My box (supplied by the organizers) was quickly full with models to be proud of.

I wanted to teach three models this year, but I was refused with a message saying that from this year on, a teacher is limited to two official workshops only. Luckily, you can give as many unofficial ones as you like. Being who we are, we stood up to the challenge and created an unofficial program for the later hours of the day (actually, the night) and added our extra workshop there, just by the official program. 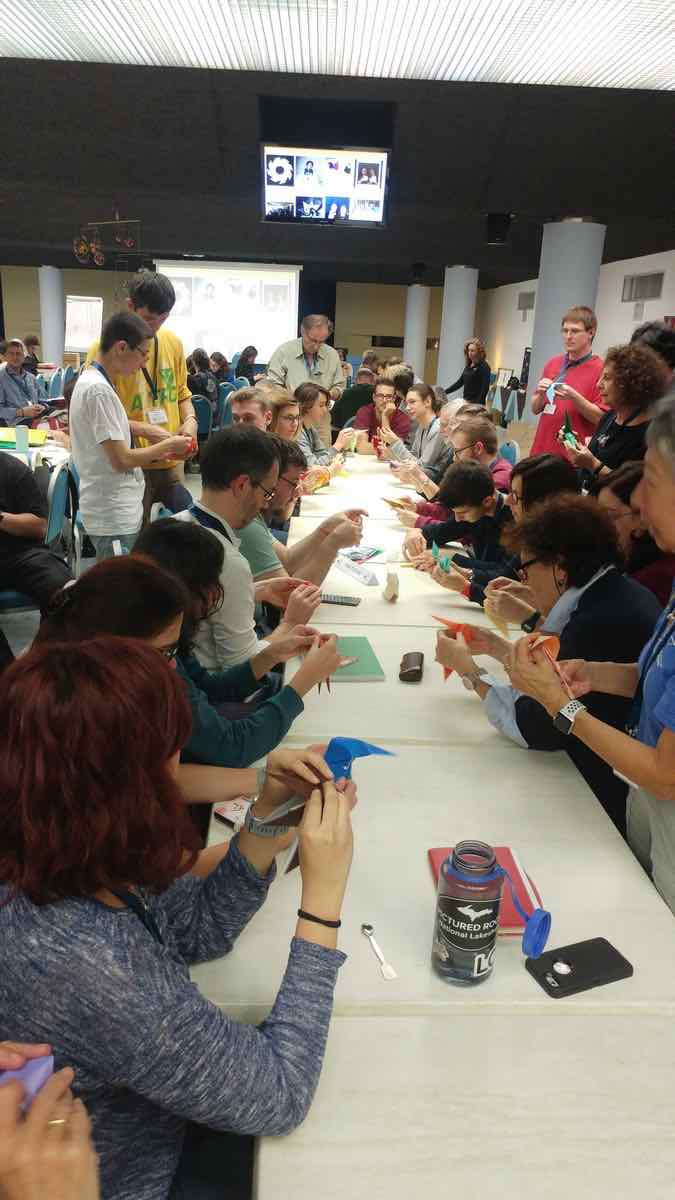 The Israeli delegation consisted of 13 folders! New record for us, with new talents from our community. I can highlight Ynon Toledano , who presented his first international workshop!

This year, though, there were no official games. I was worried, and asked myself, are we all getting old? Luckily, there was a workshop given by David Gachpapier. His works are streamlined and flow like a river, since he mostly using wet folding. For that he brought big-scale water pumps, which were left unsupervised on his table. It didn't take long for us to recognize the situation, and start a water war. So, nothing to worry yet, we are still young and reckless, at least at heart!

The CDO convention is the best in the world, and this year I had no reason to change the charts. After 35 conventions, the system is effective and everything is done professionally. The exhibition is impressive, the shop is beyond description, the food is Italian and plentyfull, but the wine is now sold, not given freely (like it was in Tabiano). Instead, every day, at around 17:00 the bar brings out some snacks for you to break the hunger.

And then, it is over. The first clues are the exhibition tables, patched with tads of bare table cloth. Then come the hugs and kisses, and the worried faces - are you coming again next year? Trying to avoid those dreadful moments, we went to have some gelato outside the hotel. Italian ice cream is second only to Italian pizza, of course.

The italian convention does not end until the thin lady teaches. The absolute last workshop is given on Sunday evening by Viviane Berty, while we try our best to interfere. I know it sounds bad, but you have to be there to understand. Usually it's the best workshop in the convention. This time Viviane taught us about the beauty of ugliness, bringing the ugliest paper you can imagine, and teaching us to fold a lizard that, with a flip of the paper – disappears!

Chapter Three - The Southern Part of the North

I am ashamed to admit that I know too little about Mexico. And what I do “know” is based on American movies and TV shows. It is all wrong. Entering Mexico is approved upon filling a form and submitting it to the clerk after a 45 minute wait. The terminal is far from being new, but clean and in order. My wife and I were very happy to see a welcome sign with our family name on it, and to meet Gabriel, a local folder and our translator, Guadalupe, our host and Margarita, another folder and the driver. Two hours later, and about 20 km to the east, we were finally at rest in the house of Lupita (a short for Guadalupe, don't ask me to explain). Traffic is terrible in Mexico City.

It took me about five years and eight conventions to understand it's not only about origami. I used to attend conventions from the day they started to the last day, and not to stay a single day before or after. Now I know better, and extend my stay to enjoy the fact I am in another state, and in this case – on another continent. We enjoyed Mexico City for a week. It is full of history and art, with the highest number of museums and galleries in the world. We also traveled to the south, to the state of Chiapas, for another week. Unlike the image of Mexico I had in my head – a desert with a lot of tortillas - Chiapas is a huge tropical forest, and is full of magnificent views and archaeological sites, in amazing condition. 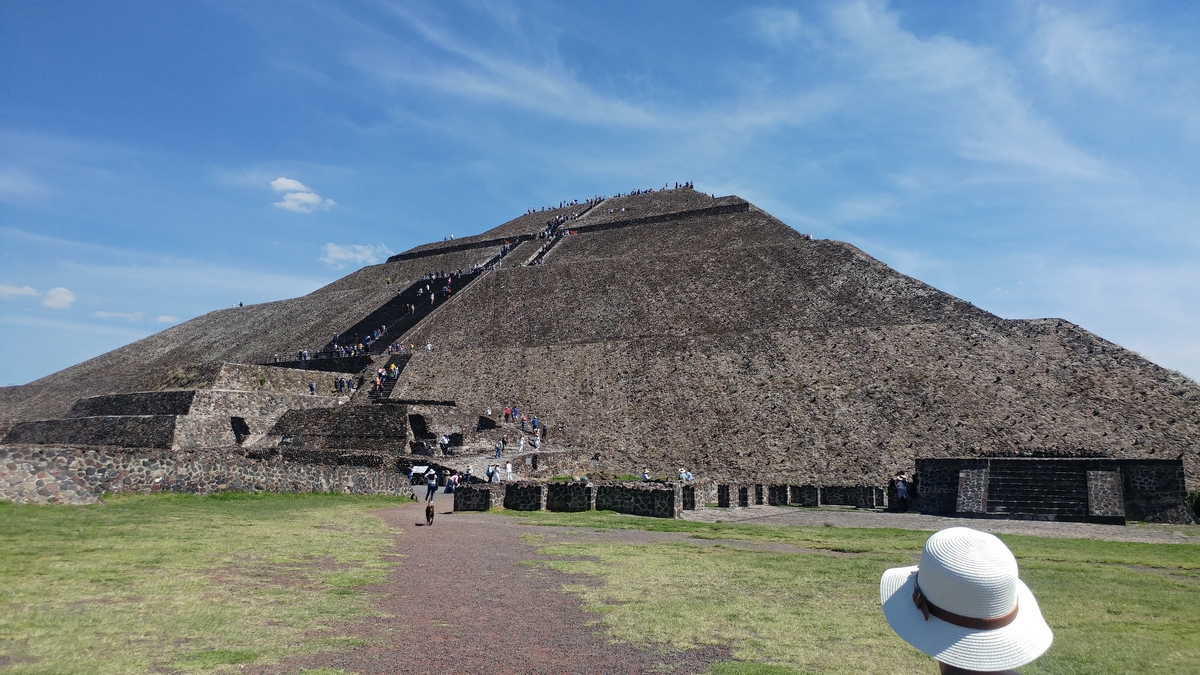 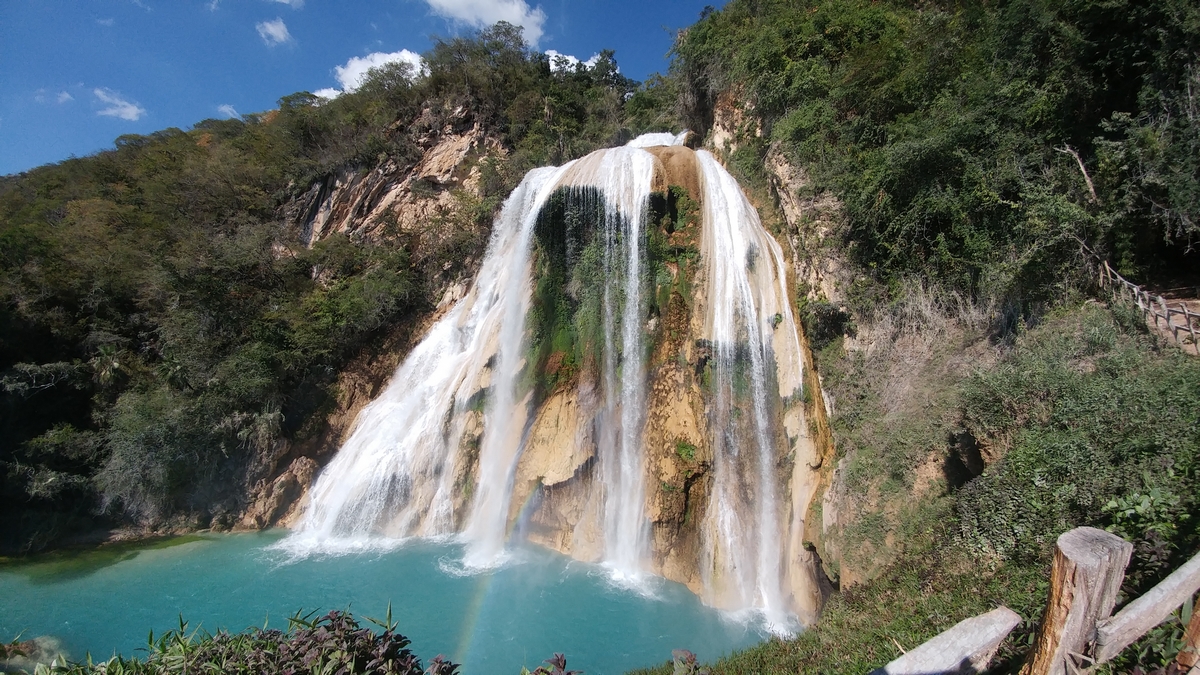 Left: The Pyramid of the Moon has the same base size as the Giza one! Right: The Chiflon Waterfalls, in southern Chiapas

I can try and summarize this part with the unsolved mysteries we observed along those days. First is the harmony-pan players - a man wearing a strange uniform standing on the street corner, rotating a handle. This produces from a box the ugliest noise you can imagine, without tune or harmony. For that, he asks you to give him money. Next are the Topes – small and sharp road bumps that are spread all over the road, before every junction, after every junction, in front of every shop on the road side, and every house is a shop. They are so sharp the driver has to stop completely before going over. This makes a 180 km trip last four or five hours. But the biggest mystery is how come Mexico is so beautiful, with happy people, polite and gentle, with amazing views and tasty food, and we never heard about it?

It was time to say goodbye to my wife and move on to the real business - the seventh Mexican Origami convention. The first day starts at 16:00 and lasts three hours through registration and “first day” mingling. The venue is in the center of Mexico City, at a branch of the national university, UNAM. It has a lovely patio, with classes surrounding it. We had four classes to use. One was dedicated to the exhibition, and the others for the workshops. There is no room for free folding, but there are some tables outside, to enjoy folding under the clear sky.

The convention really starts on Saturday morning. There are three workshops in parallel, and about four slots per day. I was scheduled to teach three workshops on every day, so it was clear I will have very few models to learn in this convention. For me it is better, since I prefer to teach than to learn. When I am invited as a special guest, I try to bring an extra edge to my workshops. This time I taught three tessellations. One was Mexico, a new design with pyramid-like structure. 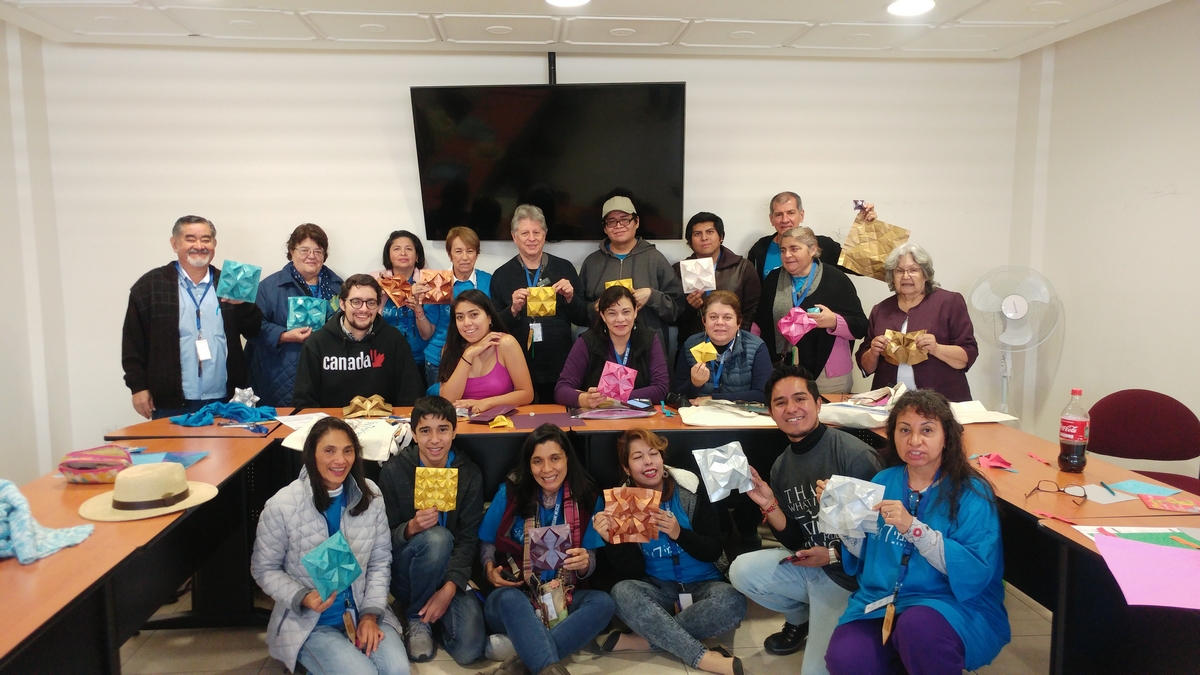 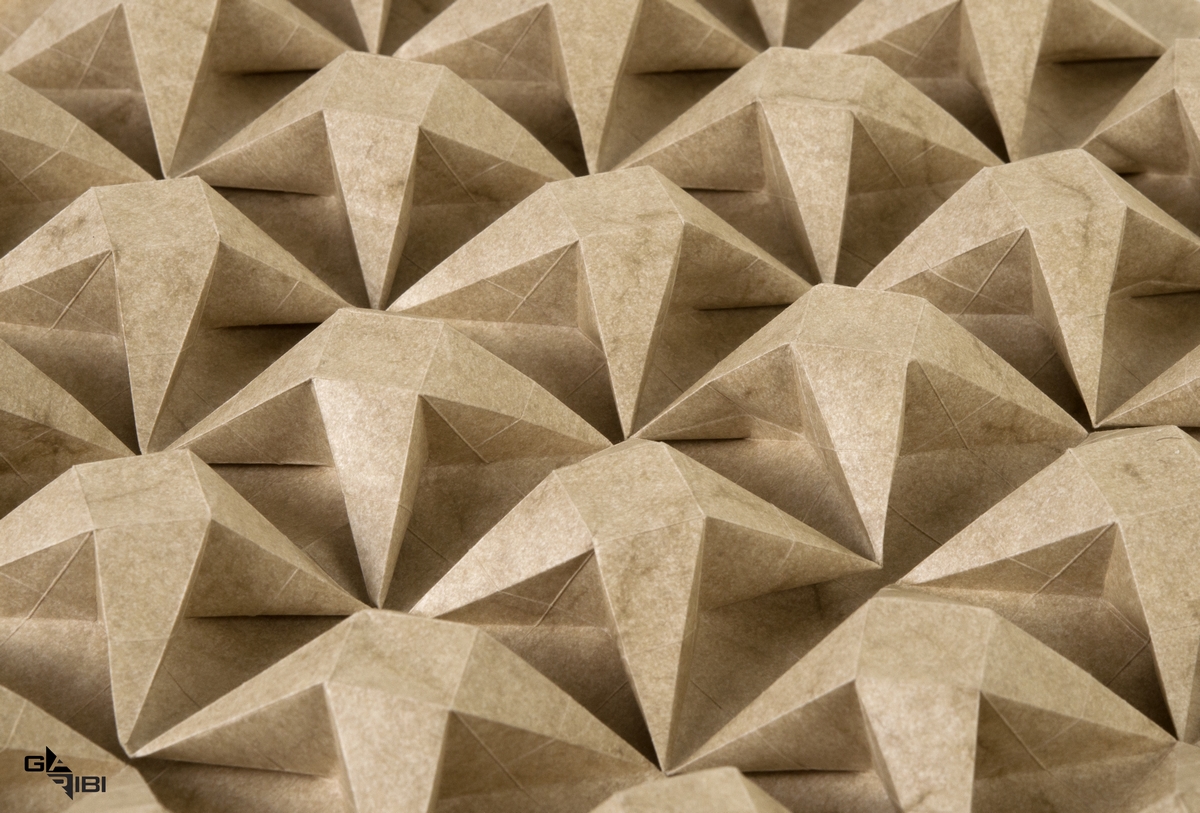 Left: Teaching “Mexico” in Mexico. Right: Mexico, designed and folded by me.

The other was the Cubes tessellation that was executed not only in paper but also in wood(!), to make a beautiful pendant. The last was Adulthood, which is easy to learn and beautiful to the look. I manage to attend a workshop by Ricardo Marin, teaching the Caja Amorito, a beautiful box he designed. Ricardo was one of the big delegation from Colombia, escorting Elizabeth Montoya, the second Guest of Honor. She specialized in Literal Origami, a genre that portrays scenes by using several sheets of paper in different sizes and colors.

For lunch we just had to step outside and choose any restaurant we like. Maybe this is the right time to mention the food. Traditional food consists on tortilla with meat, cheese and beans. The only difference is the way it is made – it could be fried (empanadas) on the plancha (castilla), baked or grilled. It is good, tasty, and cheap, but can be repetitive at a certain point. Luckily, we were in the more modern area, where the chefs are under international influences and present a fusion cuisine.

For dinner we stopped by at a local place on the way home. The day ends at around 19:00, and everyone returns home or to her/his hotel. There is no activity into the night, which suited me well – I got tired quickly. You have to understand that Mexico City is 4500 meters above sea level, and the air is thin so water boils at 91° celsius, not 100°. The thin air doesn't affect you through the day, but without feeling it, you just get really tired, and at 22:00 all you want to do is to sleep. 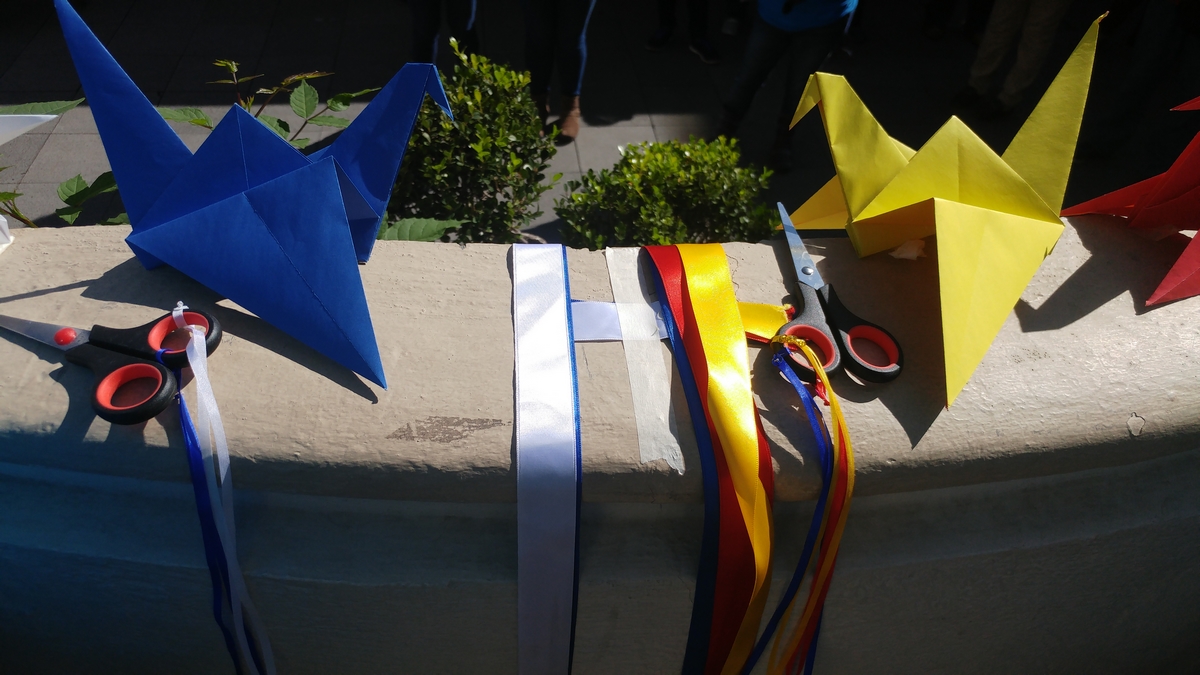 This is a well organized convention. Everyone gets a name tag, a bone folder and a pen, all attached to the lanyard. In the bag you get some papers, scissors and the program. The exhibition tables are covered with cloth, embroidered with the logo of Origami Mexico. There is a nice opening ceremony, and at the closing ceremony, each participant receives a diploma for finishing the convention.

During all my workshops there was a translator with me, Miguel, although most of the time most of the people understood most of my English.


The table of Adderly Yonca,
the best tessellator in Mexico

For me, being invited as special guest is one of the pinnacle moments in my origami career. When the invitation comes from so far away, I feel truly blessed. I wish to thank Guadalupe Martínez Arellano, my host, for inviting me and my wife to stay over, and for the invitation ,and for not giving up folding tessellations. My deepest thanks to Gabriel Martínez Mondragón, who escorted us for five days in Mexico City, leaving a loving wife at home. Same to Miguel Correa, who translated my workshops and Adderly Yonca for folding so many tessellations, including mine. For all who came to my workshops, it was a pleasure teaching you all!

I retired from public service ten years ago and decided to be an origami artist. Ten years have passed, and I travel the world to teach my models. Every fold hides another miracle!