Diagrams: Adding a Gap in the Center of a Sonobe Unit

Here is a technique that I discovered sometime during late 2015-2017, which I will call the "cupboard fold spacer." It creates a small gap in a unit, for example one in the center-line of a Sonobe Unit. To do this, one dimension of the paper for the unit is elongated. Then the ensuing extra length of paper in the center is pleated in half. The layers at the sides of this pleated section are peeled apart a little to create a gap in the unit (no rips required).

I originally discovered this cupboard fold spacer fold, or "spacer fold" while trying to modify my Clovery Cube (top photo of Fig 6), which is made of 12 Sonobe-type units. When folded as I originally diagrammed it in 2015, this model becomes somewhat distorted at the corners. The intention of the modification was to reduce or eliminate the crowding among the units which caused the distortion. The technique presented in this article can be applied to other units, Sonobe-type or not, or maybe even single-sheet models. One reason for sharing this technique is so that other origami designers might be able to incorporate it into their original models or units.

In the sample unit folded in the instructions (which is not really a unit, only a pair of blank squares), the complete crease pattern can be divided into 3 parts:

When the square paper was cut into a rectangle, it was elongated, creating area B. Area B is in addition to areas A and C, which are both half-squares. As we have seen in the instructions, the square paper needs to be cut into a rectangle in order to obtain the area with which to make the spacer fold, which creates the layers that can be peeled apart.

Suppose we have a Sonobe unit with reverse folds (see fig. 2). Let this be the unit to which we would like to add a spacer fold: 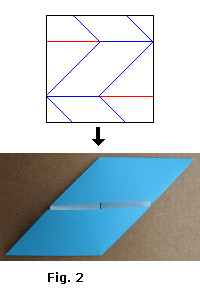 To do this, let's first divide this crease pattern into areas D and F.

If we are adding the spacer fold to the center-line of the unit, you could take figure 1 and substitute areas A and C for areas D and F, respectively:

Once the spacer fold is made, you can finish folding the crease patterns of areas D and F. The result will be the Sonobe unit with a spacer fold in the center. 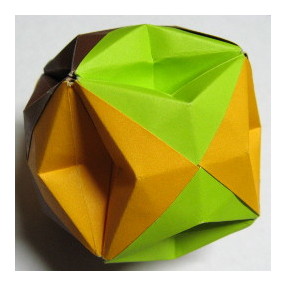