Clover Heart 4 is the fourth and final model in my series of designs inspired by Francis Ow’s Four-Leaf cLover. Diagrams for the first three designs are in the previous three issues of The Fold, numbers 56, 57 and 58, all published in 2020. As before, the diagrams are compact and deliberately meant to be somewhat of a challenge. I have included some photo help showing intermediate stages of the collapse and more, should you get stuck.

As I was experimenting with the size and location of the clover with respect to the heart, this design came along. Making the clover any smaller would not have been aesthetically pleasing, so I decided to stop here. The folding of this model is quite similar to that of the first three versions, especially the advanced collapse, which uses the same technique as Shuzo Fujimoto’s Hydrangea (pdf diagram download or video). Indeed, as with the previous clover hearts, the clover can be shaped into a hydrangea to create a Hydrangea Heart 4.

The design calls for dividing the paper into fifths, and you can find several wonderful methods at the Origami Resource Center: Dividing a Square into Fifths. A 9-inch or larger square of duo paper is recommended, although kami looks nice as well. 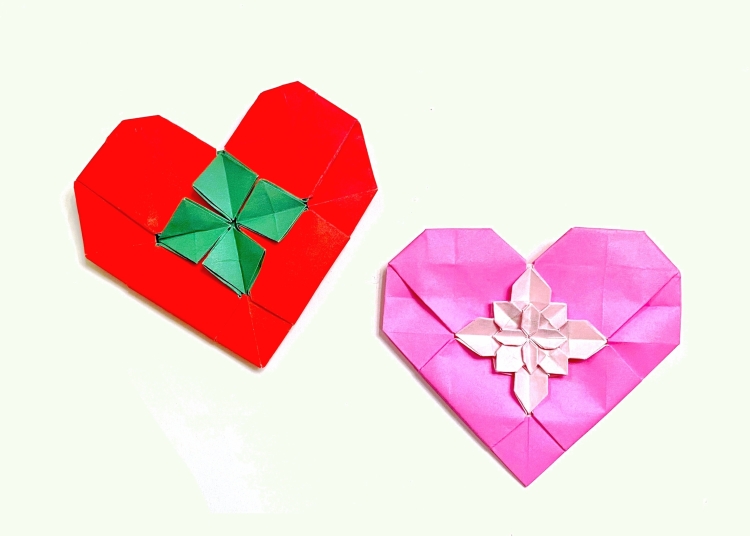 Clover Heart and Hydrangea 4, folded with duo and kami respectively.
Note that the tops of the hearts are shaped differently. See PDF diagrams.
A side-by-side look at Hydrangea Hearts 1, 2, 3 and 4, folded and photographed by Sara Adams.

In the diagrams, I have added some extra insights that compare the four heart designs in terms of finished model sizes and paper usage. Also, as in the other three hearts, you can adapt the square collapse to make designs such as J.C. Nolan’s Andrea’s Rose. Stay tuned for clues for adapting and more in an upcoming issue of The Paper. Until then you can challenge yourself. Hope you are having as much fun folding my series of Clover Hearts as I had in designing them.