Diagrams: Evolution of the Tulip

Last March 2016 at The Garden of Archimedes, the museum for mathematics in Florence where I work, we scheduled a workshop for families on the theme 'Origami and Spring'. Since I knew that I had to teach elementary students, often with no prior experience with paperfolding, I selected simple but very effective models. The easiest one was a three-step tulip (Figure 1). According to Gay Merrill-Gross1 and Michael LaFosse2, many modern authors discovered it independently. I think it almost can be counted as traditional. 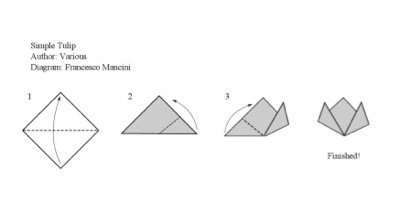 
Only three steps are needed. You can increase the number of steps if you want to round the tulip petal by mountain folding the lateral points (Figure 2). Or you can decrease the steps if you start from a square cut along a diagonal. In addition, there are no reference points, so every kid can make his/her own tulip different from the others. It is an ideal model for a first-timers workshop. 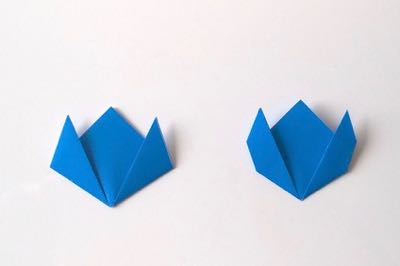 
Once I had the flower I needed a stem. I could choose to let the kids draw it or teach them how to fold one. Of course I decided on the latter route (Figure 3). Also in this case it is difficult to find an original author3. But you need to use glue. This is not a mortal sin, but the risk is to disappoint the audience if in the introduction of the workshop you provide the 'no cutting-no gluing-only folding' rule. 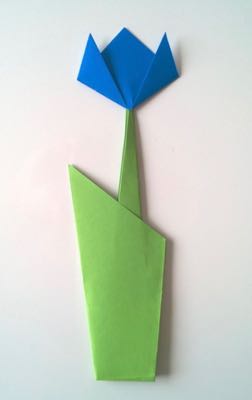 Figure 3. Flower and stem glued together.


So I started thinking about how to solve this problem. First of all, I needed a triangle open at the bottom. In this way I could create a hole for the stem. The solution was easy and simple: start with a waterbomb base! The sequence is a little bit longer, because you need to fold the other diagonal and the two middle lines of the square, but it's not too complicated. Even better, you have other geometrical objects to talk about. So, once you have the waterbomb base, you can follow the original sequence. In order to have a hole for the stem, at step #2 you don't need to be very precise. This first stage of the evolution allows the model to stand and be visible on both sides (Figure 4). 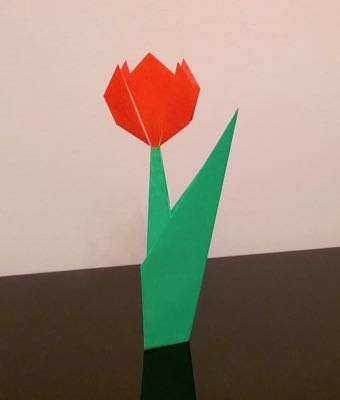 
I made a search on Google, and it appeared that no one else previously had thought about this approach. But after I published a photo on my Flickr page, one of my contacts told me that it was very similar to Gay Merrill Gross' Simple to Teach Tulip published in Creased Magazine Issue 7. I didn't have that issue, however on the website gallery there was a photo, and the resemblance was noticeable. I immediately wrote to Gay, attaching my diagrams, and she confirmed that the two models were the same. There was only a little difference in the stem. Gay sent me her diagrams, and it was fun to read in the notes that we had the same inspiration. While I was waiting for her answer, I taught the model and it was successful. Maybe not every kid will call it a tulip, but surely everyone sees a flower.

However the evolution was still in progress, and there was more room for creativity. If you try to fold the tulip starting from a square cut along a diagonal, you remove a step and also get a bicolor flower. How to achieve the same result on the model with the hole? You cannot reverse fold the petals because they "break" the waterbomb base. You need another base: the blintz base with a slight modification. If you make a classic blintz (with four corners of the square to the center) you only have a flower that is half the size of the one made with the plain square. You need to make an alternate blintz (I don't know if it has a specific name). You valley fold two opposite corners and mountain fold the other two corners. After that, it's the same sequence. I wrote right away to Gay and she told me that she hadn't thought about that approach. I published the photo on Flickr, and this time nobody recognized it (Figure 5). 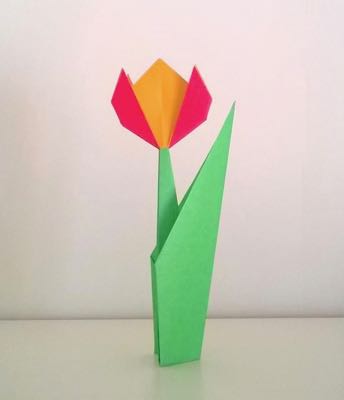 
You can change the combination of the colors by changing the way you fold the waterbomb base in step #5.I didn't have the chance to prove it with the kids yet, but I taught it at the 2016 MFPP (Mouvement Français des Plieurs de Papier) Convention, and they liked it. I hope you like it too.