This model is an advanced version of Jun Maekawa’s Pyramid, which you can find in his book “Genuine Origami” published by Japan Publications Trading in 2008. This version differs from Maekawa’s in that you can indefinitely keep adding branches to every single pyramid wall that you’ve folded by iterating the folding sequence shown in the diagrams.

The word “fractal” in the title is used rather casually in the origami world — I think. However, fractal is a legitimate mathematical term. Therefore, when you say something is a fractal, you have to think about its definition, which I can’t tell you here because even mathematicians don’t know how to define it. (Doesn’t make sense? I agree with you.) Anyway, take a look at the bottom of the pyramid (if you ever fold it). The tips of branches meet densely and form a curve. This curve — even though it appears as the faintest haze — has specific interesting features and is thereby mathematically categorized as a fractal figure. (Doesn’t make sense? See my article “Fractal Crease Patterns” in Origami4: Fourth International Meeting of Origami, Science, Math, and Education, 35.) 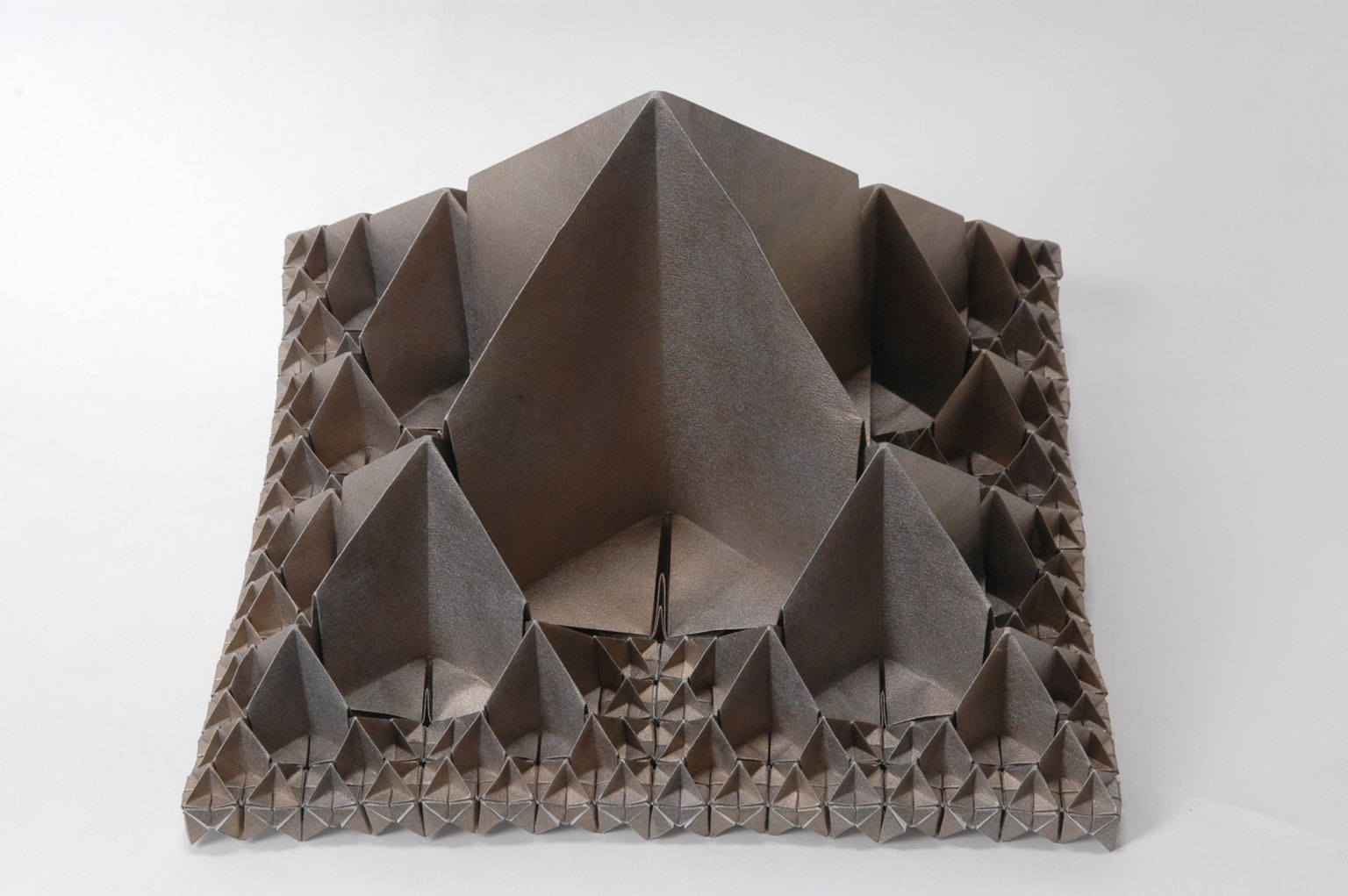 Warning: The diagrams show the easiest way to describe and follow the folding process, yet they are extremely difficult to execute and will severely damage your paper. Do not expect a reasonable result from any sort of aesthetic viewpoint when you use one sheet of paper as shown in the diagrams. To have your work look nice, do what I did for the photo: Precrease the whole square, cut it into small pieces, fold each of them nicely, and put them together with glue. I have never folded the entire shape from one sheet of paper without cutting, even for n=2.

Editor’s Note: Ushio Ikegami created this Fractal Pyramid in 2006 and published a general schematic for the model in Origami4. The diagrams presented here are much more detailed. This model is remarkable because it is the only (to my knowledge) origami model to accurately and precisely approximate a true mathematical fractal both in the crease pattern and in the folded form.

Now, in mathematics, fractals are often self-similar, but not all self-similar objects are fractals. A filled-in square, for example, is self-similar (it is made of four copies of itself, each a copy of the original square shrunken by one-half), and a square is not a fractal. Rather, fractals are objects that can be self-similar but whose infinite progression part is some complicated curve, not just a point, line, or square. Self-similar origami, when examined closely, usually has the creases progress to a point or a line, which is not a fractal object. Ikegami’s Fractal Pyramid, on the other hand, has its creases converge to a complicated fractal curve. Therefore this model truly does deserve the honor of being an origami fractal. (By the way, mathematicians do have a working definition of the term fractal, but it is very technical, and there is some debate about whether or not the definition should be improved.)

First saw this in 04

Very nice, I have the crease pattern from 2004 when I first saw it in Japan. Its great he decided to publish it.