I'm an origami designer from Warsaw, Poland, interested most of all in tessellations and modulars, though I also enjoy and appreciate figurative origami folded by others.

My first serious origami book that I received as a little boy was John Montroll's Prehistoric Origami: Dinosaurs and Other Creatures (which has recently been repackaged as Dinosaur Origami). I was very excited about dinosaurs at the time, so being able to fold them out of paper was an incredible joy. These models were a bit challenging for someone who had only folded a paper boat and similar models before, but with some work I learned how to read the instructions and soon I knew all the 20+ models by heart. I folded them all the time, including the time at school, and, since there was a period during which I folded several every day, I believe I folded several hundred pieces altogether.

When I went to college, thanks to the Internet, I learned about modular origami. I used only a few simple units, but I tried to create my own ways of connecting them and to modify existing designs in order to build new shapes. The units I used most often were Robert Neale's Penultimate Unit, Nick Robinson's Trimodule, Meenakshi Mukerji's SSIT, and Sonobe units. I also created a few simple units of my own but didn't really feel like an origami designer.

Then, by fun coincidence which deserves a separate story, after about 20 years of folding, I visited my first convention ever - the Outdoor Origami Meeting in Kraków. Meeting some people I previously only knew from the Internet and seeing the vast diversity of different origami models was a very inspiring experience. Among other things, it allowed me to learn a bit about tessellations. When I came back, I started learning and folding tessellations and soon realized that I was able to create my own variations or even completely new designs. I also created a flickr account, which allowed me to share my origami work faster than my web page and to follow other folders. This renewed interest in origami started a cascade; the more I design and fold, the more new ideas I get. Currently new ideas pop up faster than I am able to transform them into clean folds. I don't know how long this is going to last, but I enjoy this origami-altered state of mind. 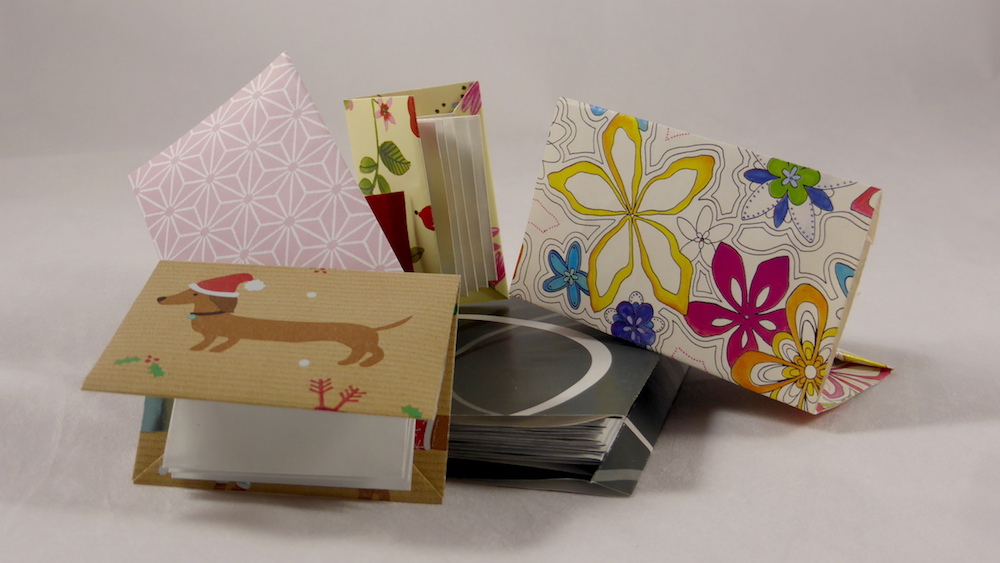 While I mostly create abstract, geometric models, sometimes I get an idea for a model that represents an actual object. I got the idea for folding a book while looking at a sculpture of a saint holding an open book at a church. I thought a book was an interesting subject for a sculpture and also for origami.

This model is folded from a long strip of paper and by varying the proportions, one can make a book with any number of pages. A length-to-width ratio of 1:10 is a good starting point. There are no reference points for making the folds. Just guess, and depending on where you fold, you will get books with different proportions and different numbers of pages. The letters used in the picture to the right and in the diagrams show how your guesses affect final model’s proportions (\(w =\) width, \(h =\) height, \(m =\) margin). There is a color change between the cover and the pages inside. Gift wrapping paper is a good choice for this model, as it is usually white on one side and colored on the other and sold in rolls, allowing for long strips to be cut easily.