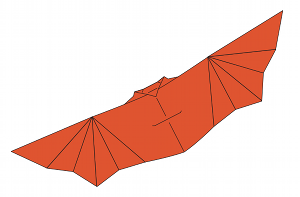 Halloween is just around the corner, which means it's the season for carving pumpkins, picking a spooky outfit - and of course finding a fitting origami design to fold! But perhaps your search ends here.

Last year, on October 29th 2011, I had the pleasure of being taught a wonderful action model by Talo Kawasaki - his "Patty Bat". He had designed it only shortly before, being inspired by the flapping action in Deg Farrelly's action butterflies. Diligently Talo had also diagrammed the model and had them published in Creased Issue #5.

I immediately fell in love with this charming model. There are so many things speaking for it. You can fold it from simple printer paper (both letter and A4), it's simple enough to fold with beginners or a hoard of children, and the action is great. Some flapping actions are hard to get right, but this one works beautifully, and proves it by also giving quite a clapping noise when the wings touch. Actually, I'm not sure which I love more, the flap, or the noise it makes. Especially when you've got a crowd flapping those bats - letting them pat if you want - it might well remind you of standing in a cave and tons of bats flying by.

Indeed, this claim was already put to the test. At the Origami Deutschland convention in June 2012 Susanne Schmitt and her two adult daughters, Kristina and Franziska, taught the model. It quickly developed into the "convention model", that model that everyone ends up folding, teaching others, enjoying. At one point a huge group gathered and everyone let their bats pat. And what a noise they made!

Perhaps motivated by this great feedback about the model, Talo revised the diagrams in June 2012, and is publishing them now with The Fold for your enjoyment. Or, if you prefer video, you can watch me demonstrate it - and especially the wonderful action - on YouTube.