I love to fold origami, and I have an interest in children and creativity. These two aspects were the focus of an origami workshop for children aged 5-10, held during spring of 2016. For this occasion, my colleague Stella De Muro and I decided to present only origami models that were designed by children, such as a beautiful photo frame or an ingenious tank. The last activity of the workshop that day was to create new origami models. Yuri had designed another photo frame. I suggested that he add a few folds to his photo frame that resulted in a chick. Later, I drew the chick’s eyes. Finally, Francesca suggested our chick was very similar to a famous mobile game character and that was its final name. 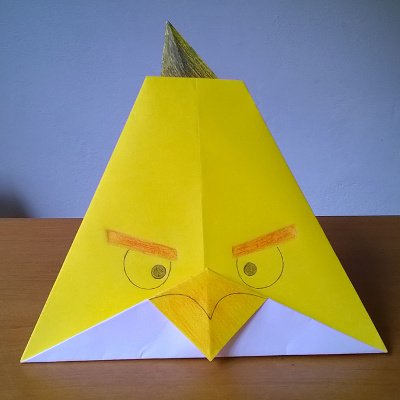 
About Luca and Yuri:

Luca Congia was born in Sardinia, Italy. Currently, Luca works in the educational services of the southern Sardinia with children and adolescence. In 2016 he presented his educational origami-brick “Mattoncino-Prisma” to improve visuospatial ability, executive functions, planning skills and creativity in children. His other interests are drawing, music and creative activities for children.

Yuri Murgia is a very creative boy who loves Harry Potter, breakdance, craft activities and, of course, origami. This origami model is his second creation.