Editorial: Origami Collections and You 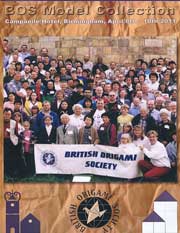 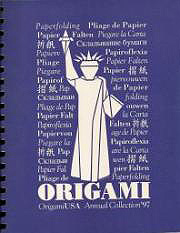 For the last five volumes, I have produced the British Origami Society (BOS) Model Collection (the same type of publication known as the Origami Collection within OrigamiUSA). It is a unique treasure, in origami terms. As well as being a twice-yearly smorgasbord for hungry folders, I think it has greater value than that. What it forms, albeit in a somewhat ad-hoc fashion, is a representative slice of what is happening in the origami world at the time of publication. Whilst old designs should and do feature inside, the majority of designs have been created in the time since the previous Collection.

This allows us to take a step back in time and look at what was “hot and happening” during any given year. We can trace the faltering early steps of those who blossomed into creative talents, as well as admire the “one hit wonders” who have seemed to quickly vanish. Model technique can reflect the current folding styles and trends, whilst diagramming can also reveal the features available in the software packages of the time. When I look at the first computer-drawn diagrams I produced (in the early 90s), they look incredibly dated and unsatisfactory to me!

These collections also represent an extraordinary amount of effort on behalf of the compilers, something that is probably overlooked by those who enjoy them. Chasing up individual folders for designs and permission is a time-consuming activity. Putting out requests for models often brings a fairly desultory response (or so it feels). Designers happily post their models all over the web, but seem unwilling to make the effort to submit their work to collection compilers. The deadlines involved mean that editors are tempted to include work that might not be considered if you had a wider choice available. That's not to say that we include any old rubbish, but in an ideal world, you want to present only the best.

The moral of this is “don’t be shy” – your work, however modest or grand, is important to us and deserves its place in history. It’s almost impossible to guess who a given model will appeal to, but you’d be surprised – something you may feel pales by comparison to the “greats” might just appeal to many people. It’s also slightly selfish (in my humble opinion) to create but not share; if everyone took the same approach, we wouldn’t have origami as we know it today.

Next time you flick through one of these extraordinary Collections, just imagine you had to do the work of creating it yourself. Imagine the time spent cleaning up diagram images, re-arranging the contents to fit better on the given page format, creating indices (both text and images), adapting image formats and scanning hand-drawn diagrams, creating covers, not to mention duplicating, storing and shipping out the Collections. Then with the BOS there's the extra work involved in preparing a pdf version with bookmarks.

Having given it some thought, please consider contributing next time you see a plea going out on the origami-l or in organization's magazine announcements. You are not only sharing your work amongst those who will really appreciate it, but showing appreciation for the faceless teams that assemble them so regularly and lovingly. As well as that, in most all cases you'll get a free copy of the Collection, not something to be overlooked when it's the size (and weight!) of an OrigamiUSA or Tanteidan Collection!

Should you need more folding inspiration, why not purchase some of the earlier Collections? You can buy from OrigamiUSA here and from the BOS here.