Event: Meet and Greet at Library

by Divya Iyer
Edited by Meenakshi Mukerji
exhibition
My name is Divya Iyer and I am a 16 year old origami enthusiast from Apex, NC. Ever since I learned how to fold in fifth grade, origami has been something I do every day. Whether it is to de-stress after a tiring day at school or just to have fun, origami is what I turn to. Folding at least one unit of a modular structure daily and finally putting them together is very satisfying to me.

After having exhibited my origami at local libraries a few times, I was invited to participate in a meet and greet event at Eva Perry Regional Library of Wake County, North Carolina, on Sunday, April 28th. I enjoyed the event immensely and wanted to share my experience with fellow folders so you too can think of participating at such events to spread the joy of origami. 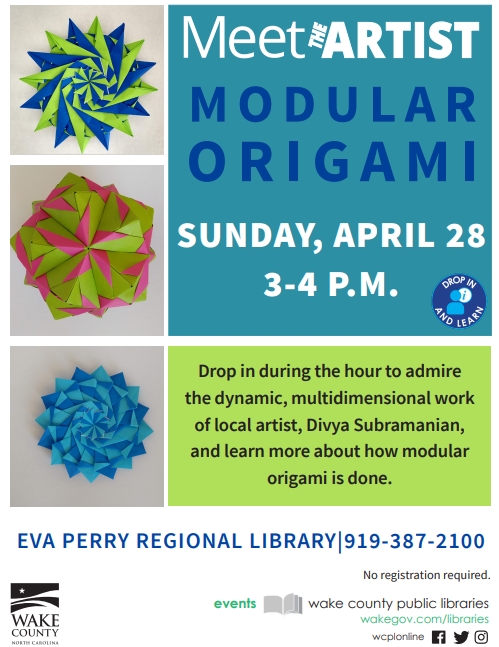 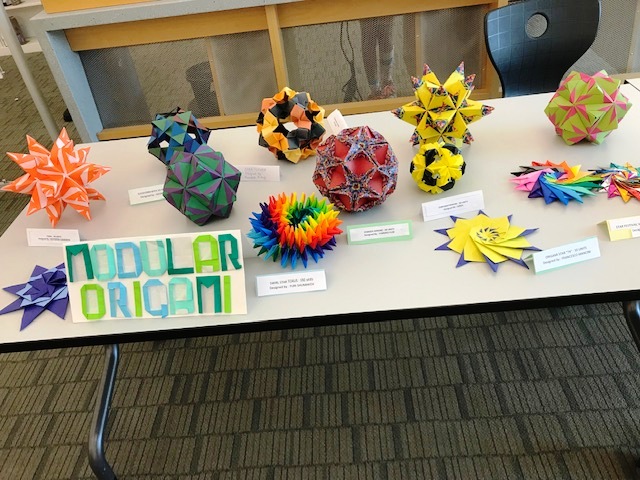 The Flyer and a closeup of the exhibits


The event was a drop-in one from 3 to 4 PM. But curious people and children stopped by as soon as I set up the table around 2:30 PM. Since it was right at the entrance, everyone who passed by were asking me a lot of interesting questions. Some wanted to know if I had a wire or ribbon connected to make the Shumokhov Torus Swirl. I took the swirl apart and joined it again as everyone watched in amazement. I used some action models such as the Magic Rose Cube by Valerie Vann and the Flasher by Jeremy Shafer to attract shy kids with origami magic tricks. I had a “Do not touch” sign initially, but seeing everyone's interest, I removed it and let enthusiastic kids and parents touch and feel the sturdy models. The fragile ones were tucked away safely in the display case. There was one college student who told me that he does similar work with wires.

The Adult Services Librarian, Mary Y. Ajiboye, who provided this opportunity, was watching from the side with her clicker. She counted 93 people. She missed counting a few as she had to help out elsewhere. Overall, it was well attended. I am so happy that these people learned something about modular origami that day. Most of them were people who came to the library for books or other classes. Three of my friends dropped in as well. The event was supposed to end at 4 PM, but some kids and parents who came late approached the desk, and I continued talking to them. More than an hour and a half just flew by but I still did not want the event to end.

I had filled the display case about two weeks prior to the event. Ms. Ajiboye kept saying that all models were beautiful every time I ran into her. In particular, the Patterned Icosahedron by Meenakshi Mukerji caught her eye. She wanted to hold it in her hands and admired its sturdiness and beauty. So, at the end of the event, when I gifted it to her, she was thrilled beyond words. It is indeed a wonderful, sturdy design.

This event was a great experience for me. I have always been reserved, but the event helped me overcome it. I had given origami models as gifts to teachers and friends earlier, but did not talk much about what they meant to me. But now I have discovered that there is so much joy in sharing and talking about what one does and how it is done. Many parents asked me if I offered classes and wanted my visiting card.

I am still amazed at how many people were genuinely interested and asked me questions. I had initially thought that I will be sitting all alone with my exhibits and perhaps just a few would stop by to look at them. I feel that everyone who came to the desk enjoyed themselves, because I let them touch and feel the origami. If they were in a glass case all the time, perhaps they would not have appreciated the beauty as much. Many children found it hard to believe that something as simple as one unit when combined with several others of the same kind will result in such beautiful geometric patterns and solids. After my successful Meet and Greet event, word spread and Cary West Regional Library contacted me to host another 'Meet the Artist" event on August 18. They too want to have some origami for their front display case two weeks prior to the event. 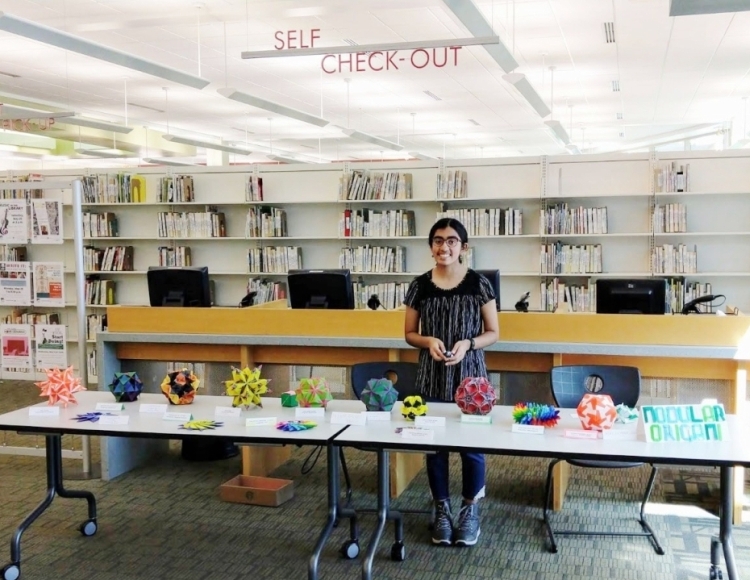 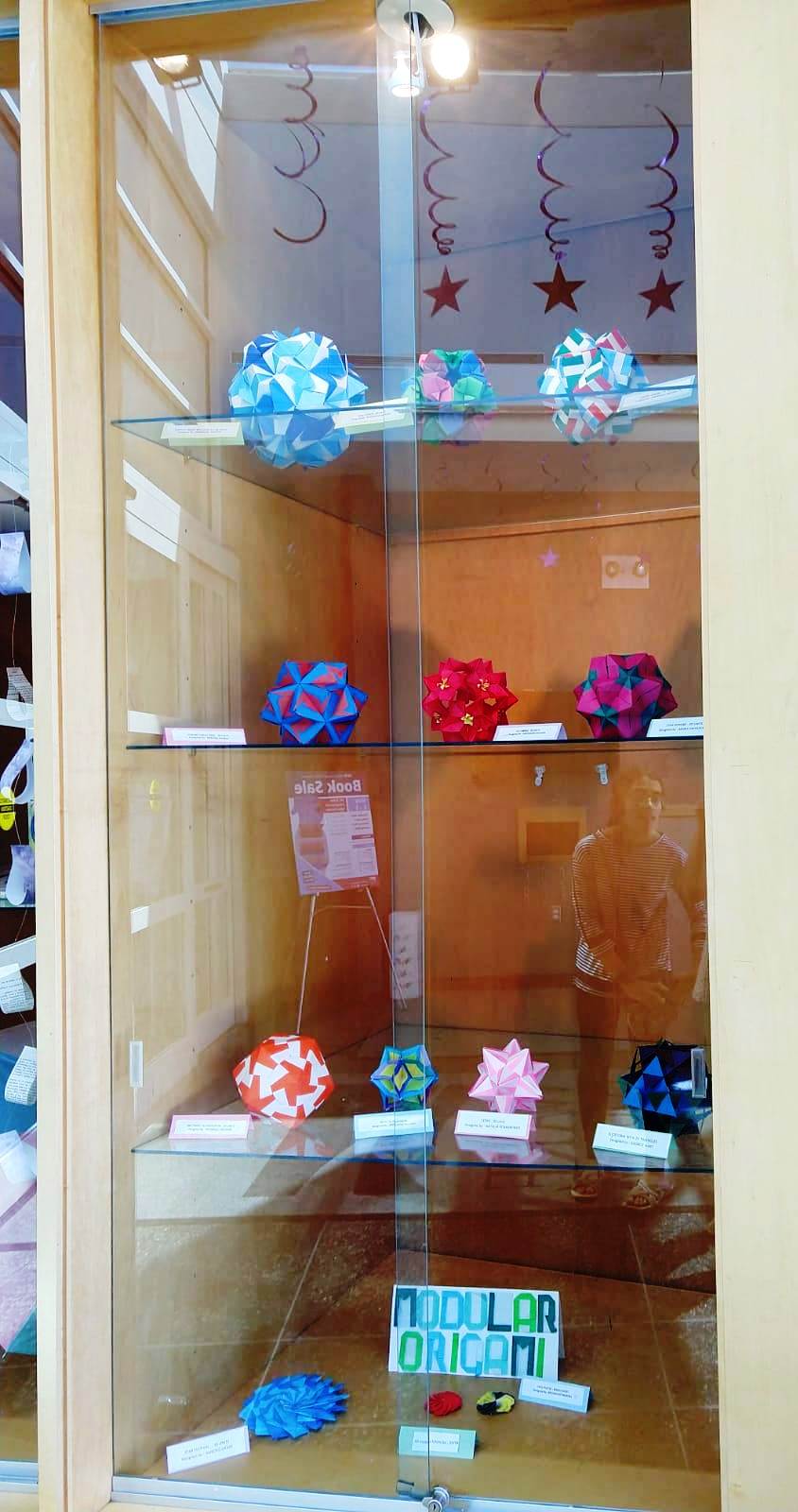 
I would like to conclude by sharing that I will be attending my first ever origami convention, OrigamiUSA Convention 2019 at New York this June. I am fortunate and honored to have won the 2019 OrigamiUSA convention Scholarship and can’t wait to attend. Please take a moment to say hello if you find me. Though I have exhibited at Origami By Children a few times, I can only imagine how exciting the event is going to be in person.