Exhibition: Origami in the Garden

What exquisite timing! Those of us who attended Centerfold 2016 in Columbus, Ohio on 29-31 July 2016 had the opportunity to visit Franklin Park Conservatory to experience Origami in the Garden, with sculptures conceived and designed by Kevin Box, Jennifer Box and Robert J. Lang, along with multitudes of butterflies overhead in the Conservatory Atrium designed and folded by Michael G. LaFosse and Richard L. Alexander.


We may have had opportunities to enjoy incredible origami exhibitions over the years, but how many of us have been fortunate enough to visit Origami in the Garden? If you have not done so, you still can catch it at Franklin Park Conservatory between now and November 13, 2016. Go! It is well worth the trip.


For others who can’t take advantage of the exhibit in Columbus, please visit Origami in the Garden for other locations and future exhibits possibly near you. You also can catch a glimpse and learn about the history of Box Studio and their collaboration with Lang by viewing this video!


In the meantime, in the spirit of “a picture is worth a 1000 words”, please enjoy the following photos accompanied by descriptions provided kindly by Kevin and Jennifer Cady Box:


This is the first collaboration between Box and Chinese origami artist, Te Jui Fu. They chose to use the same colorful papers that are often used in origami, as well as another Japanese paper-folding technique called “kirigami,” which means “cutting paper.” Here, scissors are used to make four cuts in the paper square to more easily achieve the details of the pony’s legs and ears. The symbol on the back of the large pony is a collaborative signature. The Chinese character of Te Jui's last name, Fu, meaning “teacher” in English, and the box that encloses the character representing Kevin Box’s last name.


“The origami crane is a symbol of truth, peace, beauty, and long life. This crane reveals the meaning of its life as it unfolds into a star.”
— Kevin Box

Crane Unfolding was the first origami-inspired work by Box. To him, the folded crane is a symbol of what we see and who we are on the outside, but also who we are on the inside. When unfolded, we can see all the beauty, design, and detail that existed within the folded piece. There is more to the world than meets the eye, and the artist is able to express this idea in this sculpture through the simple metaphor of origami.


“For me, the paper boat captures the great adventure and courage that took place on such fragile terms within the vastness of the sea.”
— Kevin Box

Polynesian explorers used the technique of “wayfinding” to navigate the ocean by boat. They used no nautical instruments to find their way, but instead relied solely on their senses. The custom of wayfinding was passed down from generation to generation through the oral tradition, often in the form of song, as a way of memorizing the movements of certain stars, the changing seasons and weather patterns, the habits of animal species, the changing colors of the sea and sky, and the patterns of ocean waves. The study of clouds was also of particular importance in navigating thousands of miles of open ocean [1]. The Polynesian people traveled in small boats across vast seas carrying the plants, animals, and seeds they needed to prosper on very small island chains like, Micronesia, Melanesia, and Hawaii. One of the plants that was transported and introduced to Hawaii by the Polynesians was Wauke, also known as the paper mulberry tree [2]. Hawaiians continue to use the inner bark of this tree to make Kapa, or bark cloth, into wearable, durable garments [3].


An ancient Asian legend tells of a thousand paper cranes. It says that if you fold one thousand cranes within a single year, you will be granted a wish. The Japanese call it “Senbazuru.” Many people undertake this paper-folding pilgrimage as a wish for long life and good health. The single, white crane is a symbol of peace, but it is also a symbol of the soul or spirit. Cranes are known to mate for life, so when a thousand cranes are folded and given as a wedding gift, it is in the hopes that the marriage will be a long and happy one. Millions of people throughout the world have folded a thousand cranes as a wish for peace.


“Rather than a monument to the tragedies of the past, we created a monument of hope for the future."
— Jennifer Box

Box and his wife, Jennifer, created “Master Peace,” a sculpture of one thousand, cast metal cranes as their wish for peace. Five hundred of those cranes are scattered around the world as individual sculptures, and 500 are gathered together here in this twenty-five-foot-tall monument. The artists made sure that all one thousand cranes were represented together, forever reflected in the black granite base.


Sway with Me is a collaboration between Box, and his wife Jennifer. Some say all artwork is a self-portrait or expression of how an artist sees him or herself. In this sculpture, a bird swing made of branches has not one, but two cranes landing gracefully upon it. They seem to like each other as they swing together in harmony. Like the origami crane, the olive branch is a symbol of peace and compromise. The origami cranes were originally made of paper and cast in stainless steel. The swing itself is made from olive branches that have been cast in bronze.


Who Saw Who? is a collaborative work of three different artists—Dr. Robert J. Lang folded the Raptor, and Tim Armijo folded the mouse--each out of a single, uncut square of paper. Box cast them each in bronze at different times, finished them both in a silver patina, and set them aside in his studio. One day, as Box was working on them in his studio, he caught a glimpse of the raptor and the mouse and was struck by how they seemed to be eyeing one another as if predator and prey. They both seemed frozen in a moment—the raptor, while scouting for a meal and the mouse while foraging for scraps. But, the difference is, the mouse has to keep a lookout for two things; the food he wants to eat and the predator who wants to eat him. The question here remains the same, who saw whom first?


“This sculpture was inspired by a real conflict I encountered in my life. The game, rock-paper-scissors, is a fun way to determine the winner for lighthearted conflicts, such as who gets to sit in the front seat or who gets to eat the last piece of cake. But in my experience, serious conflict requires conversation and communication.”
— Kevin Box


The term, “conversation piece,” is used to refer to interesting and intriguing objects that spark a conversation. In this sculpture, the artist gathers three, very different (seemingly unrelated) objects and arranges them in a unique way to inspire conversation.


In this sculptural interpretation of the game, rock-paper-scissors, the paper has won by folding itself into a peace crane and flying just out of the scissor’s reach. The heavy stone acts as a solid foundation for the conversation occurring overhead.


An archetype can be defined as a recurring symbol or motif in literature, art history, or mythology. Many cultures around the world recognize a white bird or dove as a symbol of peace and the human spirit. In Japan, the origami crane is the cultural symbol of peace and harmony. In nature, cranes are known to mate for life, and “Duo” represents this same idea of pure and devoted commitment.


Plane Folding repeats a common theme found in much of the artist’s work; the story of a piece of paper that dreams of flying. This composition begins at the base with a blank sheet of paper and shows how, with seven, simple folds, an airplane emerges and takes flight. Each fold symbolizes a choice or action taken to transform dreams into reality. It takes seven folds to make a piece of paper fly, but the first step begins with setting a goal and then following through to the finish.


The origami crane is one of the oldest designs folded from a single, uncut square of paper. Images and references to this iconic design dates back hundreds of years. The crane has become a symbol of peace around the world and continues to be an inspiration for many. This flock of cranes is lifting off in all directions to spread their wings and their peaceful message.


The artist, and his wife Jennifer, love to watch the birds gather at their bird feeders. This horizontal composition celebrates the way birds gather peacefully to share food and drink. It also reminds Box of the many gatherings that he and Jennifer have shared with friends and family—a coming together around good food, great company, and lively conversation.


In addition to the magnificent sculptures in the garden of the Franklin Conservatory, there are additional pieces inside the building, which can be viewed here: 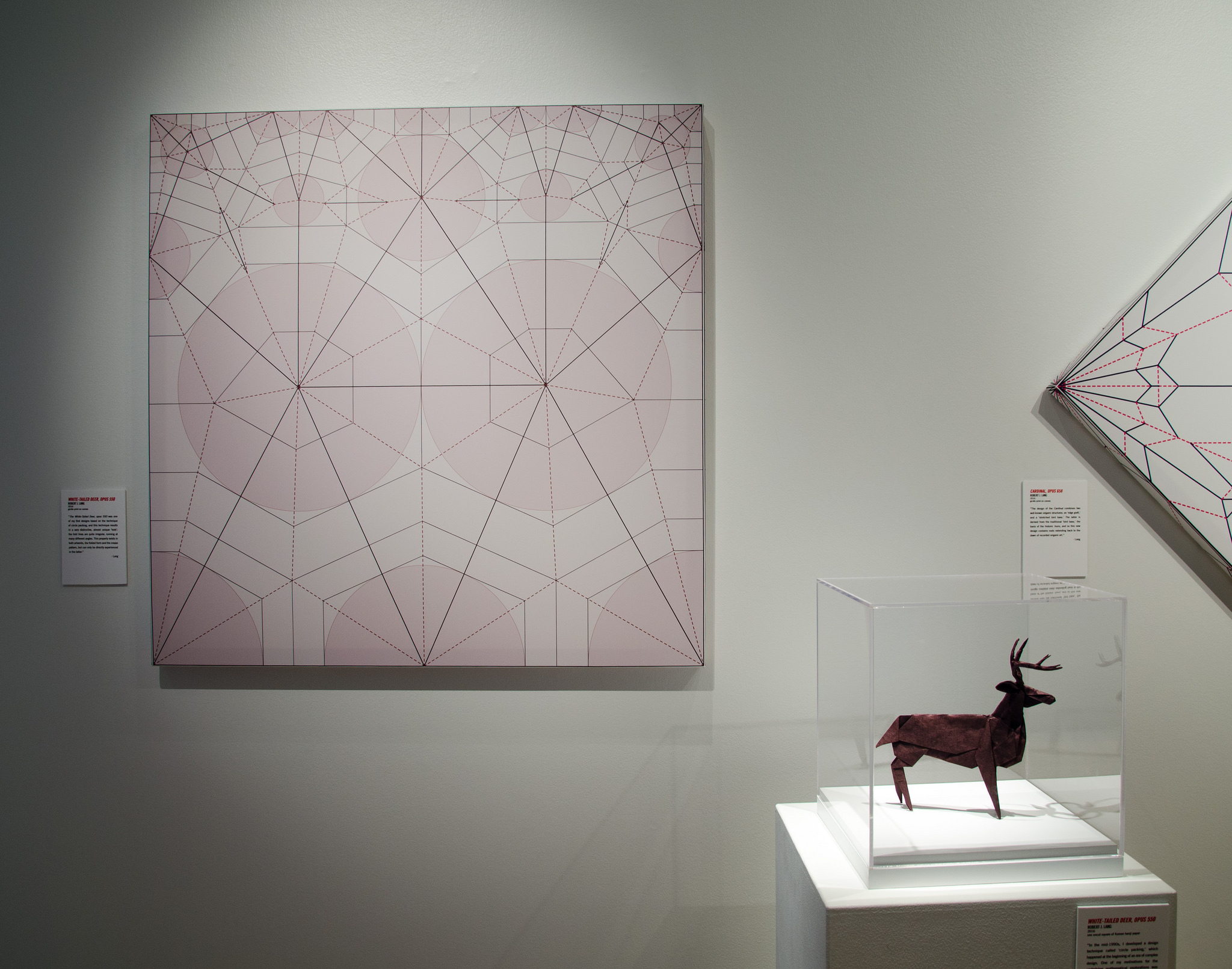 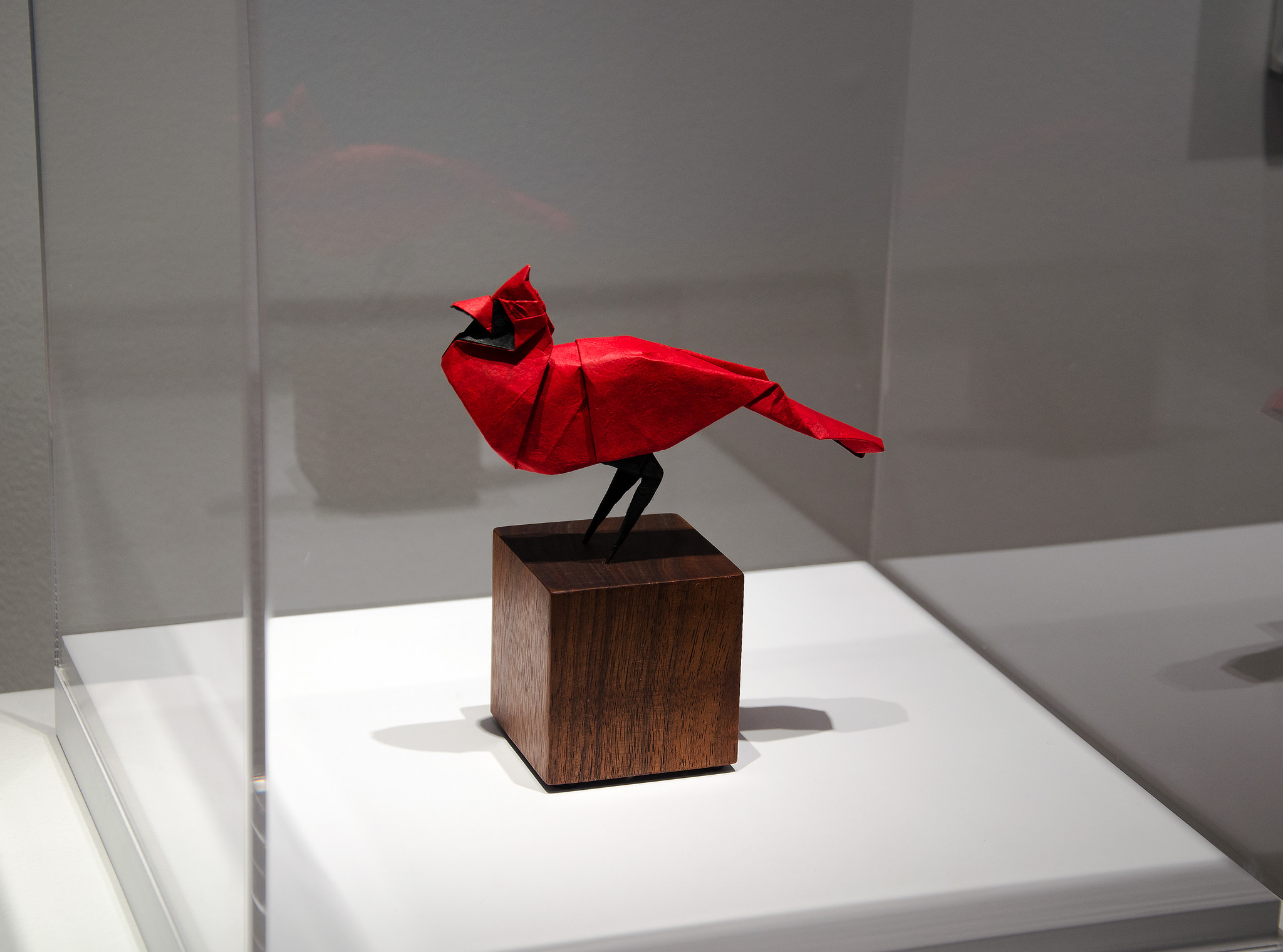 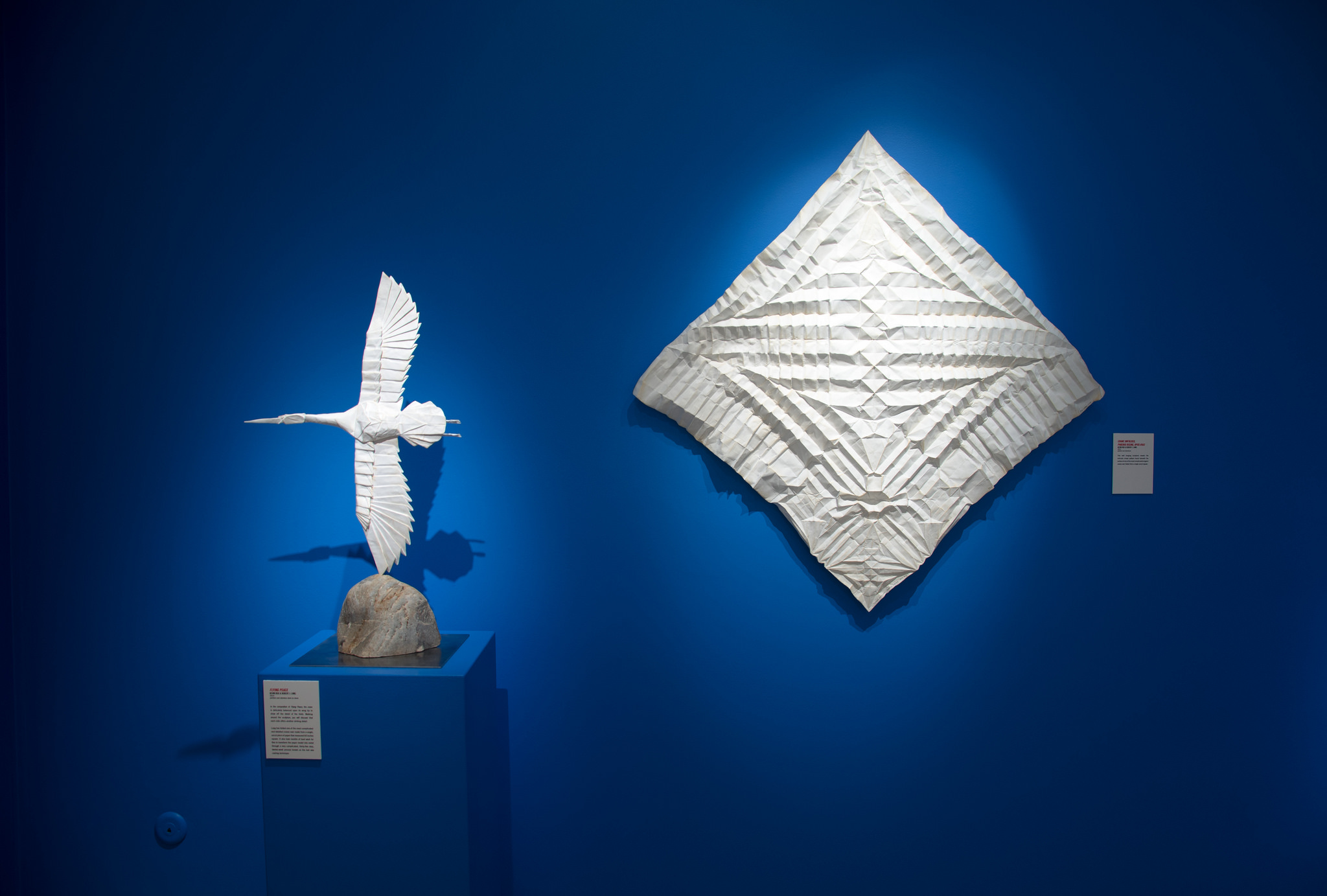 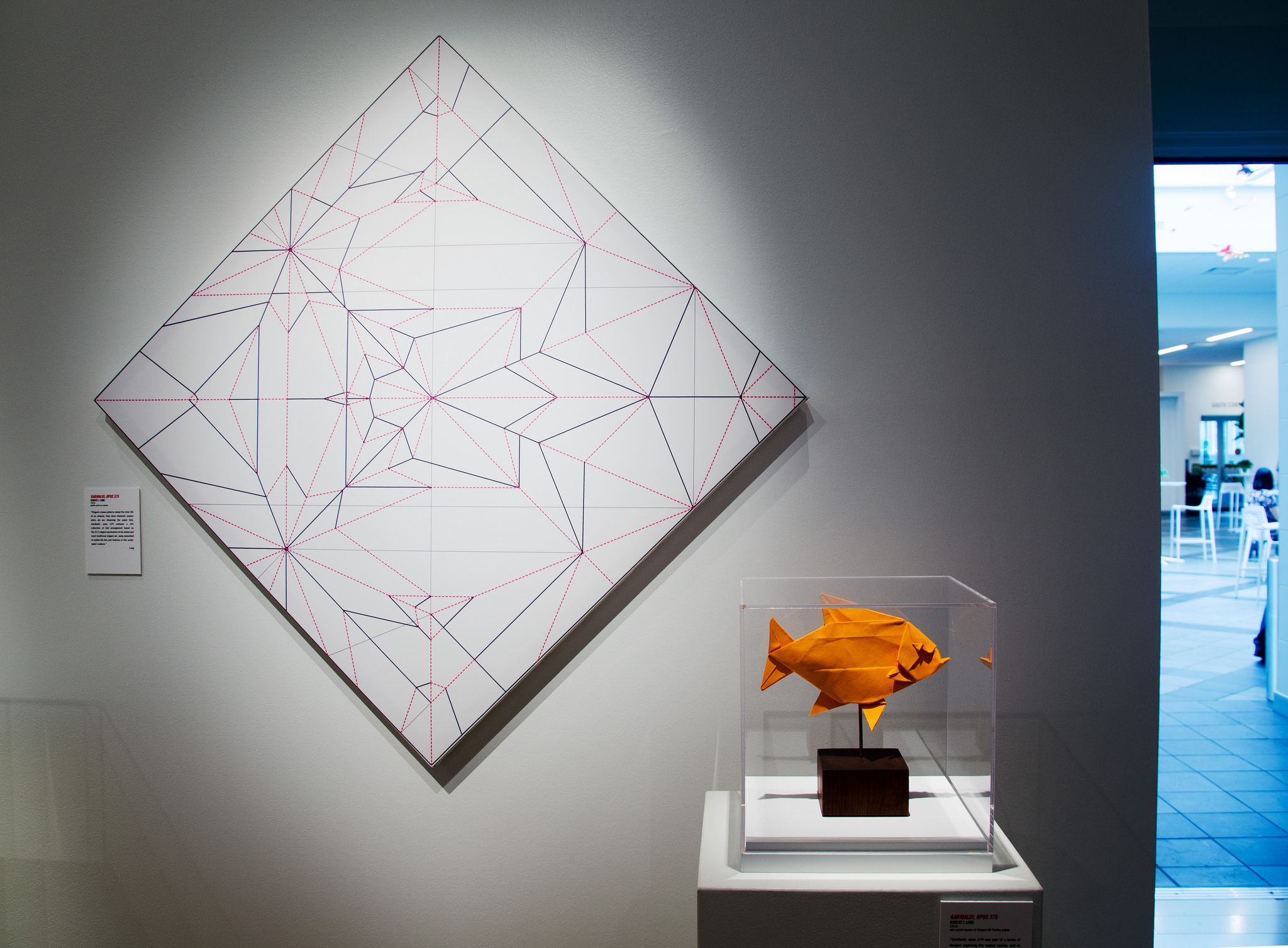 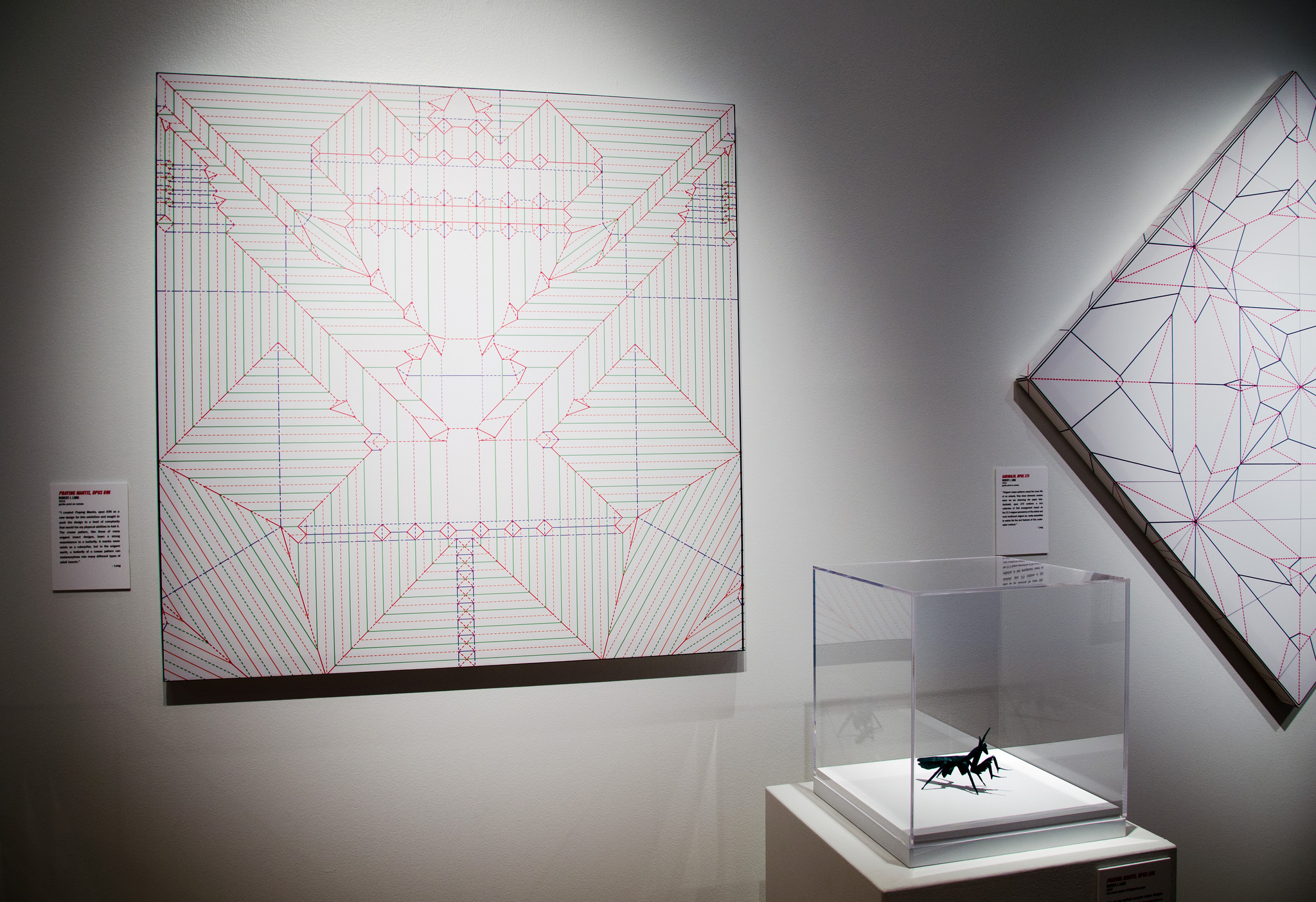 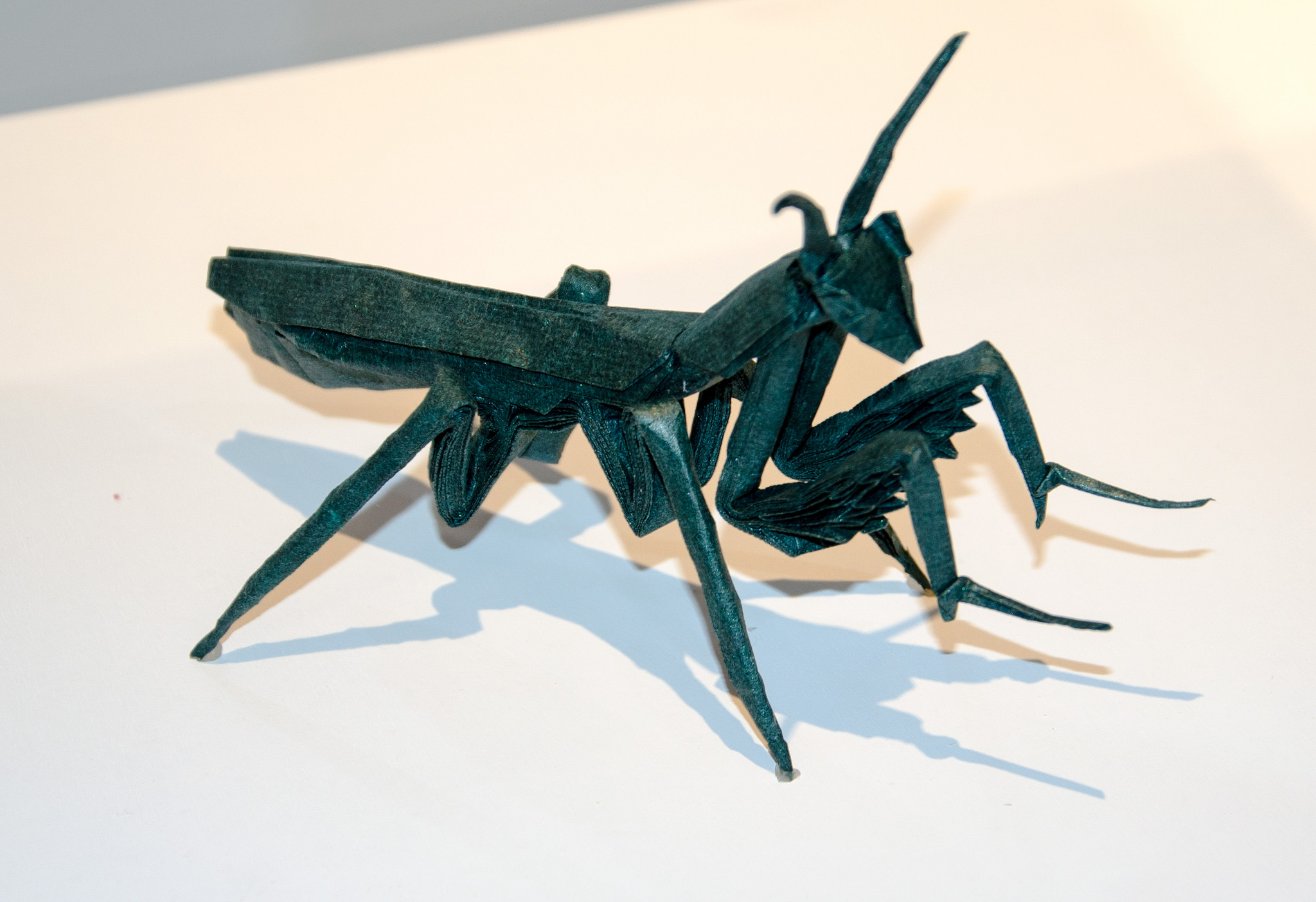 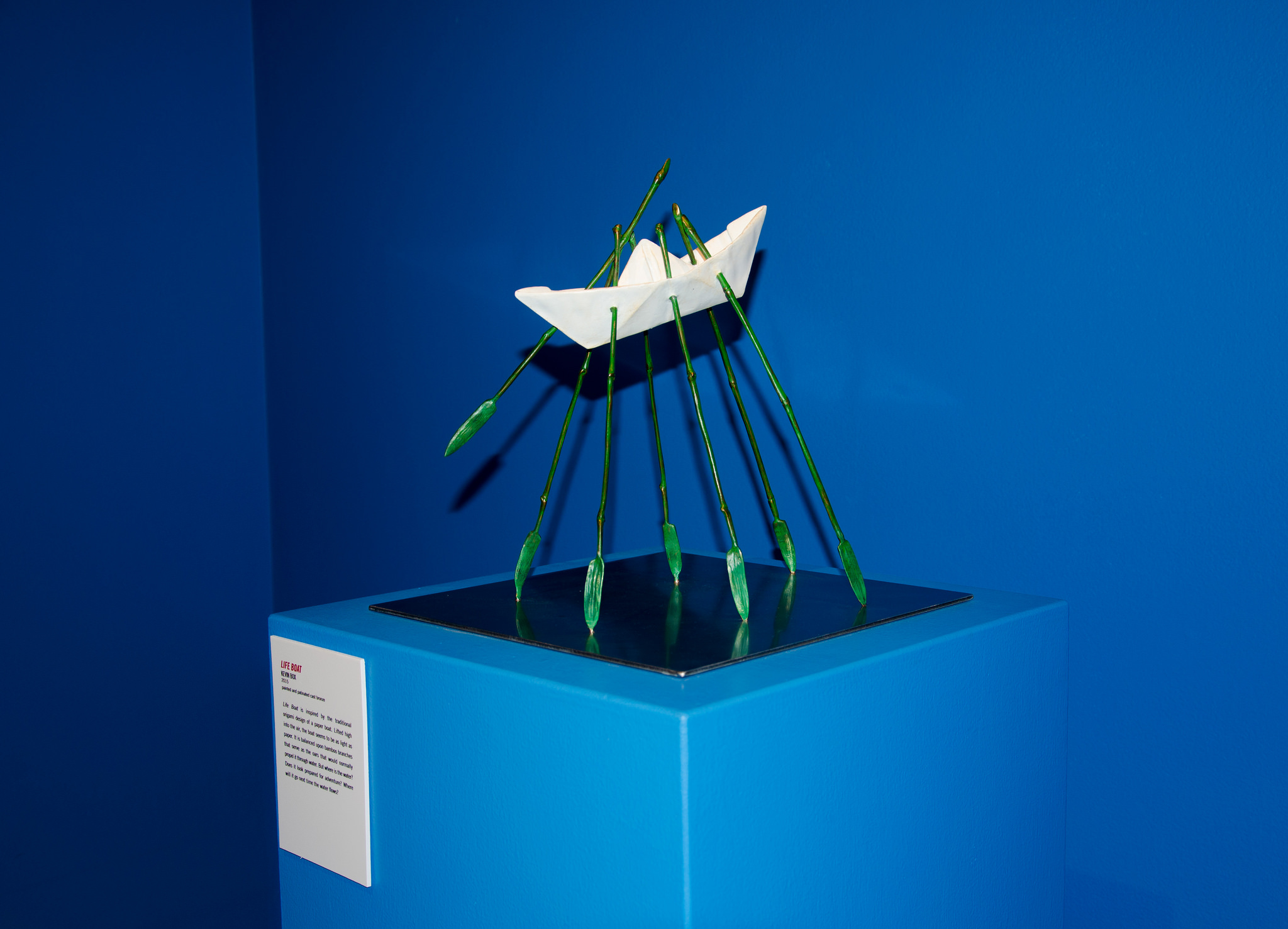 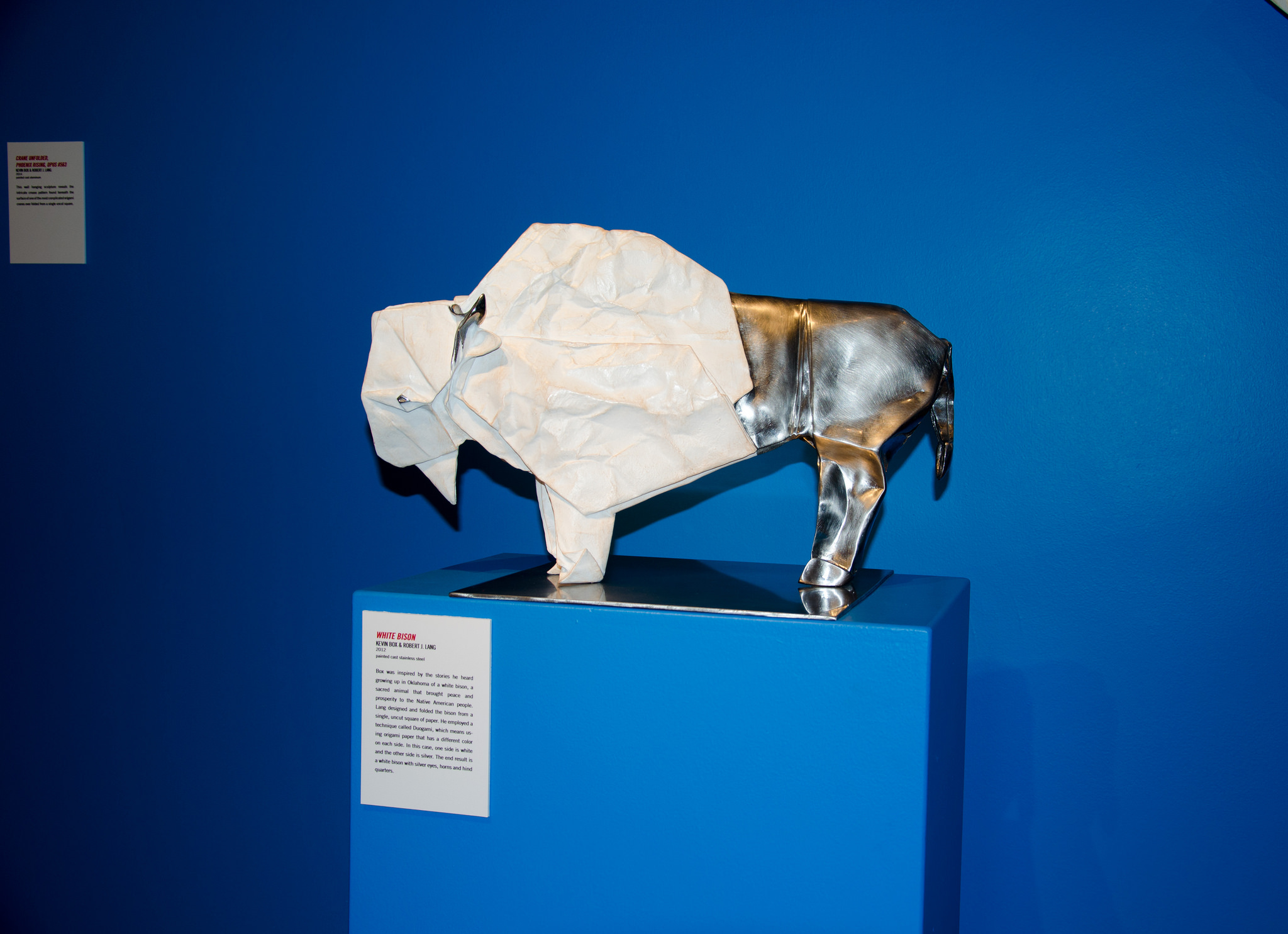 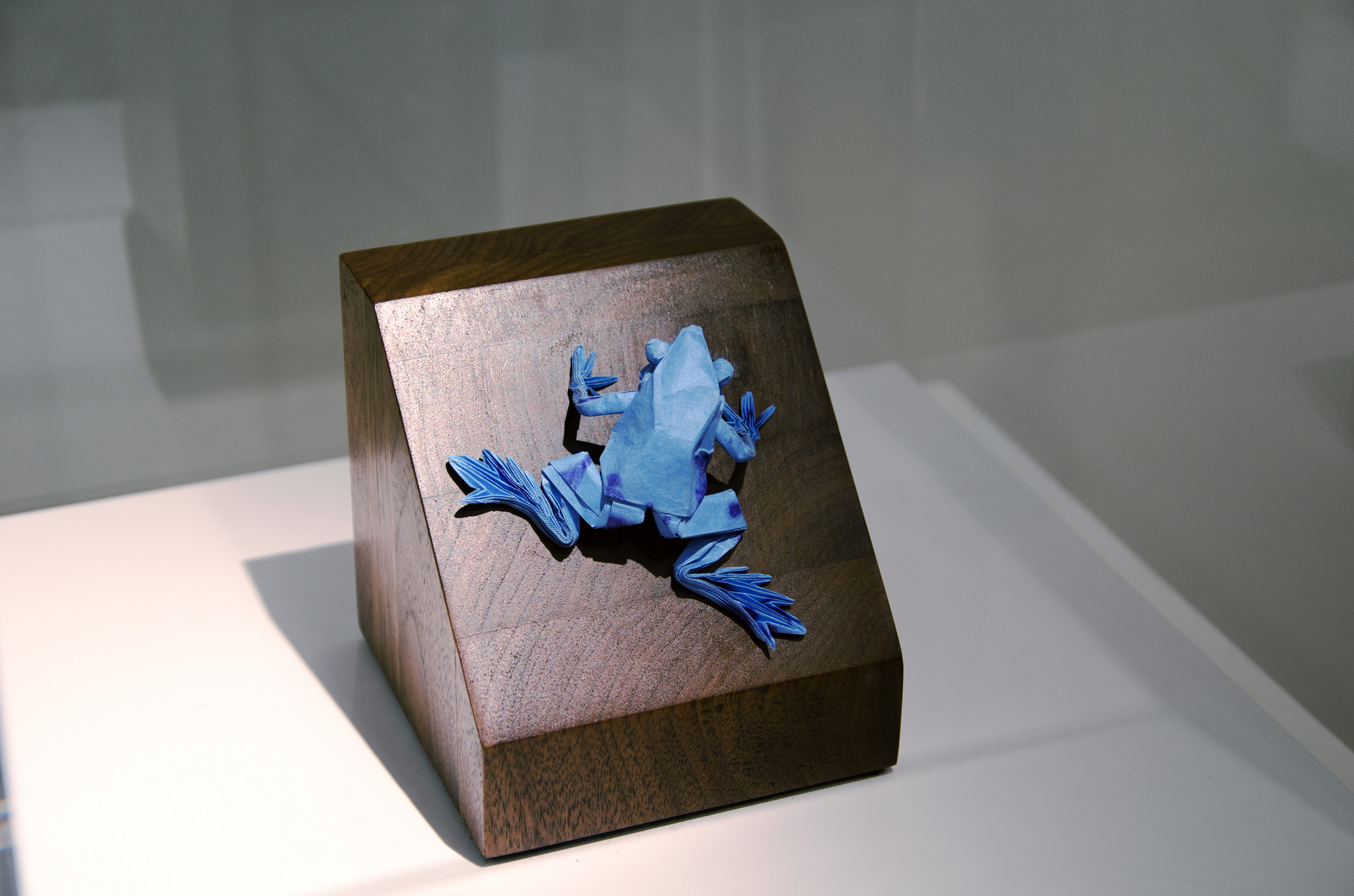 Thanks for sharing, according to calendar of the travelling exhibit, they will go to Naples FL next. http://artisnaples.org/baker-museum/exhibitions/2016-17/origami-in-the-g...
-Catherine