"Howling at the Moon" - On Origami and Synchronistic Discovery 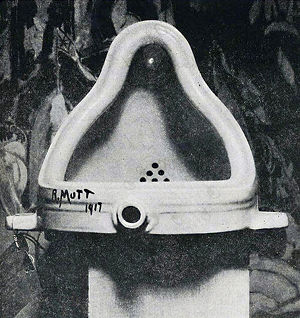 with two sets of diagrams for a dragonfly designed by Patricia Crawford; diagrammed by J.C. Nolan, and Neal Elias (vectorized by Sara Adams)

In 1917 Marcel Duchamp caused a major stir in the conservative art world when he submitted a pre-fabricated toilet as a work of art to the 1917 Society of Independent Artists annual salon. His title for the iconoclastic work was "Fountain". This act was not arbitrary, but rather, a well-planned scheme to challenge patrons to start to question the nature of what "is" and what "is not" art.

I won't go into the details about the impact that Duchamp's work had on the evolution and history of art. You can find plenty of information on-line about this incident and its implications on the web but I do have a personal story about my own experience with this artifact.

Several years back, the San Francisco Museum of Modern Art (SFMOMA) was having an exhibition where Duchamp's "Fountain" was on display. Rather than being behind glass or in a safe and secluded area, the work was right out in the middle of the floor, on a small dais, with a small rank of ropes around it. The exhibition was crowded, but I couldn't resist. It was right there… I could reach out and touch it. And seriously, I'm a trained professional, got the card and everything. I know how to handle sculpture and anyway, what kind of damage is a little body oil likely to do to a porcelain urinal? Worst thing they can do is throw me out!

Never likely to be the one who breaks rules (Seriously? Who are we kidding here? :-) I waited for the flow of the crowd to recede, peered around the corner to check security and placed my palm lightly on the surface of the vessel. It was a rush… I was immediately hit by a wave of information: energy, visions and experiences of all the people, famous and not, who had touched this object over the decades, who had argued its merit and its place, had debated its meaning and significance: in short, the innumerable individuals who over time had put their energy into it.

Now mind you, this experience is total California… we're all about "energy" out here and getting the "vibe" of things and such sort… and maybe it's all fiction, what I felt, what I saw… but I can say unequivocally that my "state" (experience) after touching the sculpture was completely distinct from that prior to touching it . What had happened? Was information "conveyed" by this object? "Downloaded" as us ultra-granola types out here in California refer to it? Scientists would very likely say that it's bunk… all made up by me. Spiritualists would say "Of Course! That makes perfect sense."

As a true pragmatist in my approach to everything I'm here to argue that it doesn't matter… in either case I was affected by touching that object, no matter the manner of transmission. I learned something compelling and important about it and art in general through the act of touching it… something about it I didn't realize or understand prior to making contact. In assessing what had occurred, too much focus on the "woo-woo" factor of it, (that's a technical term out here) founded or not, can actually become a distraction to understanding the experience. Something had happened... but what? Dismissing it as fantasy or a knee-jerk reaction denigrates the validity of the question. Just because there is a "fantastic" explanation for something doesn't mean there isn't a reasonable and useful one to derive as well, and in that derivation in particular amazing advancements/discoveries might be made. 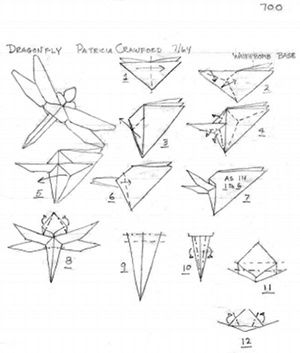 When I was in college, I spent a good amount of time studying the woo-woo in various forms, having had much exposure to it as a child. And with all my extensive studies in Psychology, Parapsychology, Philosophy and Spiritualism my ultimate determination is that we really don't and can't know the validity of these experiences… and that to declare them true and factual "just because" is as valueless and limiting a direction as declaring them false and deceiving.

For example, there is the fact that Zombies are real… truly. Not in the way that Hollywood portrays them, but if you read The Serpent and the Rainbow by Wade Davis, you'll learn about how in Haiti, the voodoo priests prepare a special concoction called Zombie Cucumber. This, it turns out, contains a powerful pharmaceutical, Tetrodotoxin, which serves to slow the autonomic nervous system to the point where breath and heartbeat are undetectable. Voodoo priests would use this concoction on their enemies who would be assumed dead and laid to rest. Then, dug up later by the priests the drug would wear off. Unfortunately, the lack of air would have caused brain damage in the victim, who emerges as a lumbering, docile, slave - a Zombie.

Now the interesting thing about the Zombie example is the level of secrecy around the ceremony which the priests used in producing the preparation. The process was very specific, elaborate and above all secretive: must be on the full moon, third Sunday, perfect darkness, etc. But while some of these elements may be crucial, it seems to me that while all of these various specifics are evolved over time and somewhat arbitrary and even unnecessary, some are potentially critical for the proper chemical reactions to take place for the compound to be efficacious. In production, the specifics of pharmaceutical production must be really precise. Temperature, humidity, pressure: the point (or effect) of all these specifics of the ceremony are designed to (or in synchronous effect) allow for the specific conditions to create the tetrodotoxin.

This of course without the scientific knowledge of the priest, but rather just the understanding, passed down over time, that this is just simply what one must do and that doing otherwise will "displease the spirits" and cause the compound to fail. For while the ceremony must have evolved over many years, it is likely that much of what's involved may be completely incidental to the proper creation of the chemical. Singing, dancing, proper types of herbs consumed, etc… may all be simply "for show" – "howling at the moon" I like to call it. This, because for the lack of specific science it's not possible for the priest to determine which aspects of the ceremony are scientifically critical and which are simply "tradition".

Unfortunately, with all the howling, it's easy for scientists to simply discard the whole activity, but I'm convinced that in time, with greater scientific understanding, we'll be able to ascertain precisely what was occurring, what was "howling at the moon" and what was "real". So what does one do? My approach is that in most (or all) paranormal activities there is some basis of fact within them, wrapped in (approximately) 90% superstition – "howling at the moon" and perhaps 10% reality. These values being, after all, completely arbitrary themselves, based on my own experience. :-) 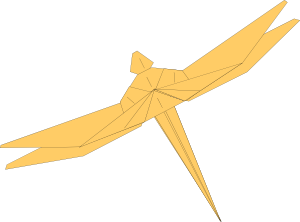 It is in this spirit of curiosity and openness that I am fascinated with the tendency in origami for similar breakthroughs and discoveries to occur simultaneously and independently through multiple creators across large distances with no contact having occurred between the discoverers. Similar, I am intrigued by the simultaneous invention of identical models. There are innumerable examples but to name a couple there are the multiple creators of the Six Intersecting Pentagrams (SIP) all within weeks of each other (described in my previous article), my own Andrea's Rose which was co-created independently as "Pinecone" by Toshie Tokahama, and my "Butterfly", which had independently been used earlier as a base by Robert Neale in 1969 in his "Tryst" (caduceus) and Jeremy Shafer's use of a similar structure in his "Interlocking Rings".

In this case, I think that there's not much to be said about the "howling" aspect of these occurrences beyond the ultimate dissemination of information/knowledge around origami. For example, in the case of the Six Intersecting Pentagrams, I ultimately found that the whole thing had been spawned by Robert Lang with his 1999 article on poly-polyhedra, but until I did the research around the occurrences of simultaneous design it all looked quite suspicious to me, woo-woo wise.

In a similar vein, it was delightful to me to discover recently that the Kan no Mado Dragonfly which initially inspired me to write Creating Origami, has also inspired many other creators over the decades: including Ligia Montoya and Patricia Crawford. I learned this while working on preparing the book for re-release and finalizing some copyright permissions with the British Origami Society.

It turns out that David Venables had a copy of the original Crawford Kan no Mado diagrams sketched by Neal Elias which he generously agreed to allow us to reproduce. As for Montoya's version, Laura Rozenberg has recently obtained those diagrams from Gershon Legman's widow which she promises will be a full chapter in her upcoming biography on Ligia Montoya. Additionally, of his own accord and out of his delight in sharing the history of origami, David Lister (of BOS) wrote an amazing posting around the topic to Hank Simon regarding the matter which explores the history much deeper.

So it seems that the source of my dragonfly is another "Fountain" inspiring many creators to reach beyond what they thought they were capable of. So where do we go next? What's the next step or objective in our explorations? The answer is to simply be curious and open, to things you don't understand or even don't yet appreciate (like brussels sprout).