"He died, but he is still in my present tense."

In response to the news of Mark Kennedy's death on Sunday, 18 February 2018 (EST), an outpouring of love and tributes were posted on individual Facebook pages and sent to Mark's wife, Arlene Gorchov, via an email address set up by Jan Polish. To allow access to the origami community, the emails were transferred to a publicly accessible blog created by Rachael Gorchov. Those wishing to share their reminiscences of Mark can post their tributes and photos to this email address: photosformark2018.post2blog [at] blogger.com as well as OrigamiUSA's memoriam page for Mark.

Here is a sampling of tributes to Mark Kennedy, a man beloved worldwide:

Love you Mark, thanks for being a great stepdad and teaching me to build community through a creative pursuit.

Mark shared his love of origami with everyone he met. He remembered more models than I’ve ever folded. I once asked him for ‘easy dinosaurs’ for a public session I was to lead. He proceeded to demonstrate to me models of dinosaurs for the next three hours, without ever looking at a book or diagram. I will miss him and his wonderful sense of humor.

Words are difficult to find, but I want to write something …

News is beginning to spread around the origami world of the passing of one of its most colorful and loved characters, Mark Kennedy (U.S.A.). Miri and I convey our heartfelt condolences to Mark's widow, Arlene Gorchov and their family and friends. Some of you will know Mark because of his colorful origami pins that he used to make by the hundred and sell – or more likely, give away! – at conventions around the world.

He had a huge, huge heart, the biggest in origami. Unfailingly kind and considerate, he was always ready to teach and share a favourite model or offer his services to someone who needed help. He was a magnet to children, who would appear seemingly from nowhere and cluster around him, attracted by his tricks, gifts, patter and cheeky humour. He gave of himself without expectations and without limits.

Mark and Arlene were devoted to origami and their origami friends. Over several decades, I met them in many places, including once on a private visit to Israel a few years ago. Miri spent almost a week with them in March 2017, when she was giving workshops at an origami exhibition in Allentown, PA, their home town, sampling first-hand, Mark's willingness to chauffer, fetch and deliver, above and beyond the call of duty. Put simply, he loved to help and to make people feel happy.

The following photo was taken by Miri in Allentown and shows Mark in the company of children, as he always seemed to be in a public place!

Origami has today lost one of its kindest and most-loved souls. It was a privilege to have known someone so full of unconditional love.

I am never too sure where my own origami journey will take me as an adult folder. Meeting Mark (and Arlene) is something I will treasure because getting the chance to befriend other folders, became my way of listening to random origami history from a person who lived it. He was not boastful of his accolades and work. I hope that my own origami journey will be similar to how Mark lived: having a collection and constantly folding or sharing folding tools or diagrams or the books he would share. He would host meetings, and if I wasn't swamped with real life, I would try to make it to the monthly Folding Sundays he organised. We always met at either Folding Sundays or various conventions or folding meetings he hosts. I find that my best memories were the various snippet of non-folding conversations we would have on comics or my admiration of his personal library. I marvel at his collection. How about the emails he sent out on O-list? I always enjoyed reading about the various Origami sightings he posted. I will sincerely and earnestly miss his humor. Thank you Mark.

I was shocked to hear Mark Kennedy passed away yesterday...

My thoughts are with his wife Arlene, and all his friends. I first met Mark at my very first origami convention, in Florence, Italy, in 2002. I was just 10, and spoke no English yet, but never forgot this funny gentle American man, and was so proud to wear one of his pins! Then, Mark and Arlene were in Italy again in 2012, at the convention in Vicenza, and we travelled together to Munich, Germany, for the 10th OrigamiTag, where I had the chance to know them better. And then I was lucky enough to join their famous Fold & Feed last summer, after the 2017 OrigamiUSA convention! I had a great time there, and was really wishing and hoping for many more times together in the future, somewhere around this origami world! It's hard to describe such a special person in words, but I'm sure he left something important and strong in everybody who had the chance to meet him. He will not be forgotten!

#Markkennedy - r.i.p. - we met him at the Origami Society Netherlands (OSN) Convention in the Netherlands - he taught us how to color origami paper - he was a very friendly folder.


Mark teaching how to color paper. Photo by Uwe Molkenthin.

I am saddened by the news that another of my old friends has passed away. Mark was one of the first American Origamists whom I befriended and was responsible for publishing the U.S. edition of Origami Hearts....He sent many of his coated models to me, and I am going to miss them. RIP my old friend. 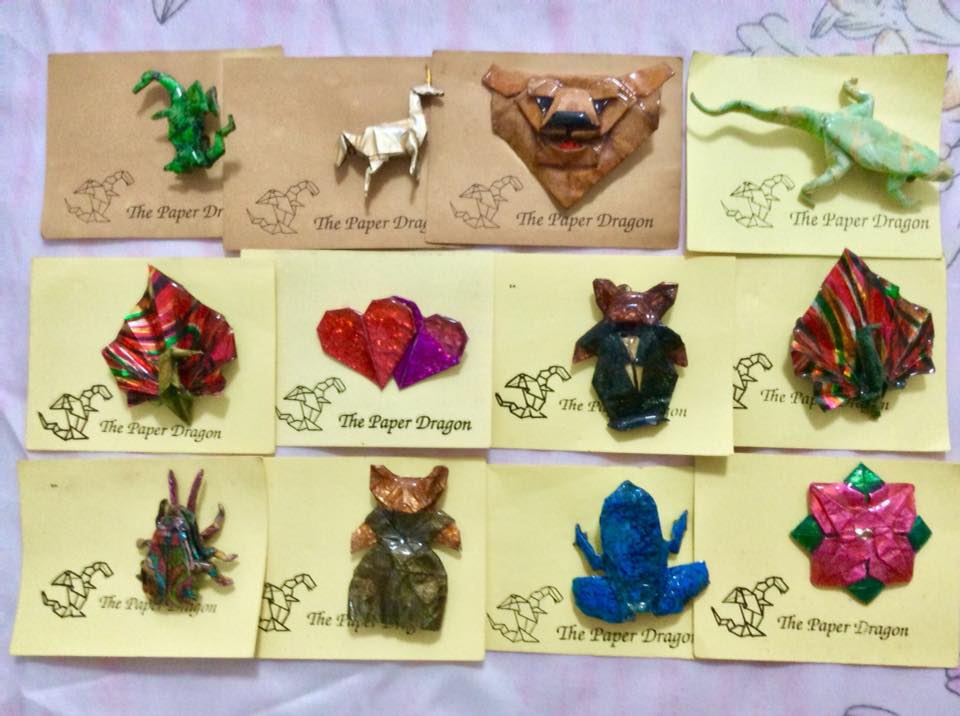 I met Mark at my very first origami convention, Origami Heaven, in 2011 on Long Island, New York I came there with another origamist who has passed away, Russell Sutherland. Mark welcomed me with an empty bag with which I could fill with his pins. A few years later he came to the German convention, and I wanted to pay back for his generosity, but he looked on my works and said that this is his pay back – the way I found my place in the origami community. Both Mark and Russell found in me an origami potential and asked me to work with it, and without them and Origami Heaven I wouldn't be what I am. In the restaurant he taught me how to fold a dollar bull, and I still have the one he folded for me, along with many magnets on my fridge. He will be missed by all of us. Lots of love to Arlene! 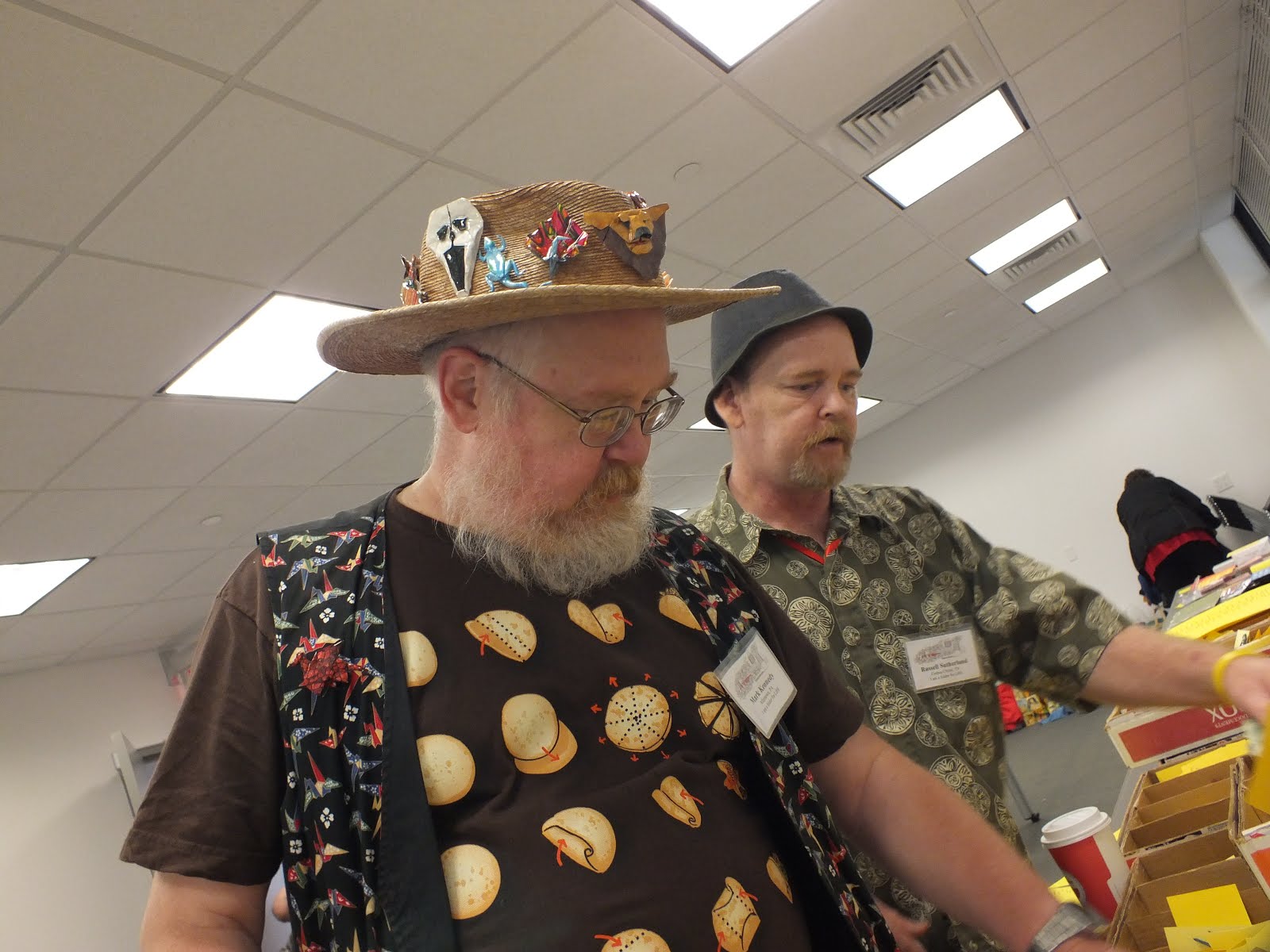 I'm so sorry to inform you that Mr. Mark Kennedy has passed away this morning. We will never forget your contributions to the origami society. I remember that we first met in 2012, you treat me so well like my grandfather, your origami pins surprise me and your jokes make me laugh for centuries. Rest in peace my dear.

Thank you very much, Mark Kennedy, for giving us the opportunity to share your origami treasures, your kindness, your generosity, your joy, along with your beloved wife, Arlene. We'll miss you very much, send our condolences to the family. Arlene, we're with you. We're sending you a big hug.

When someone you love part forever,

The memory of his love, that's what makes you strong to move on. Until Soon, Mark Kennedy. 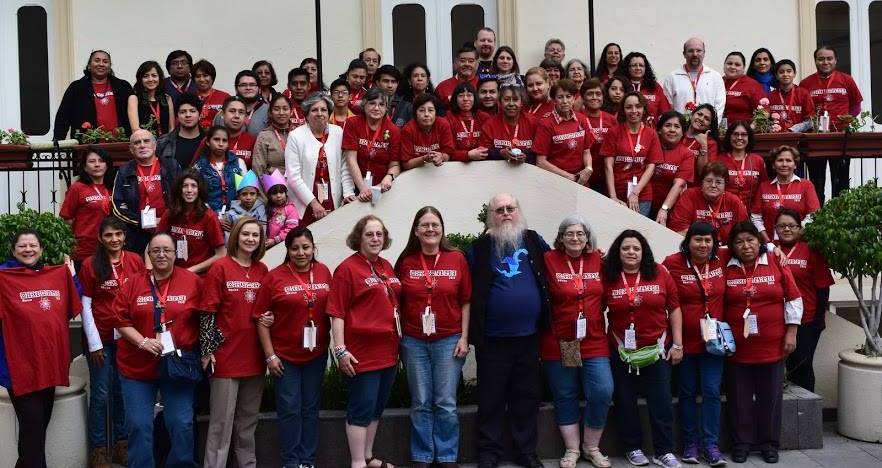 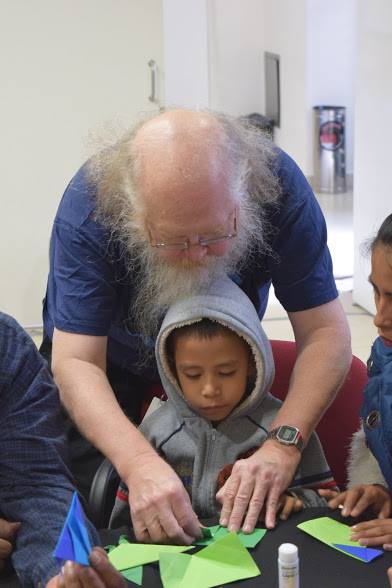 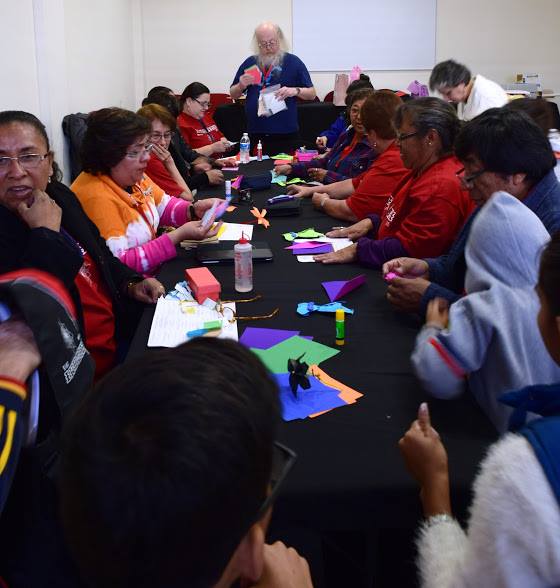 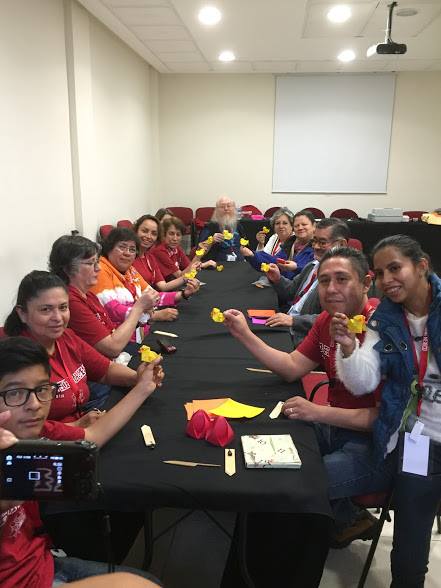 Mark Kennedy's last pair of eyeglasses. One of his wishes was for his glasses to be donated. This pair needed a minor fix, which I did at my office after being given the glasses by Arlene whom I visited with yesterday (2/21/18). They are now in the Lion's Club box. I hope the lucky recipient has as clear a view of the world as Mark did. RIP friend.

Waking up to the news of Mark Kennedy passing. For me, he was a fixture and featured attraction at Origami USA conventions in New York. Like Mark and Arlene, I spent a good amount of my Convention time in the Gold Mine, selling items that helped fund for my trip. The Gold Mine had a lot of down time when most potential customers were in rooms taking folding classes. For me, Mark's jokes never got old because it was so funny to watch the reactions of kids and parents interacting with him. He'd always tell kids that it was their lucky day because he had a special going on for kids under 12 (or whatever age he said) and allow for them to choose a free pin from a special box of them (Mark and Arlene fold and lacquered origami pin/brooches). He and Arlene were always generous with their time and energy, freely teaching models he knew and sharing diagrams in his possession. My one regret was always taking such short trips to NYC, that I never made it to one of their after-Convention fold-and-feed gatherings. Thank you for the treasured memories, Mark. You touched so many lives- mine being one among them. This video clip is from the 2007 OrigamiUSA Convention.

Sad to hear Mark Kennedy passed away. Happy though, to have known him and even met him last year in Stratford upon Avon. He was invited to sit as a guest for my origamitheatre. He touched me to tears by his loving questioning about the meaning of life and origami. Usually it is the other way around.Thank You Mark Kennedy to teach me how to live generous and joyful. 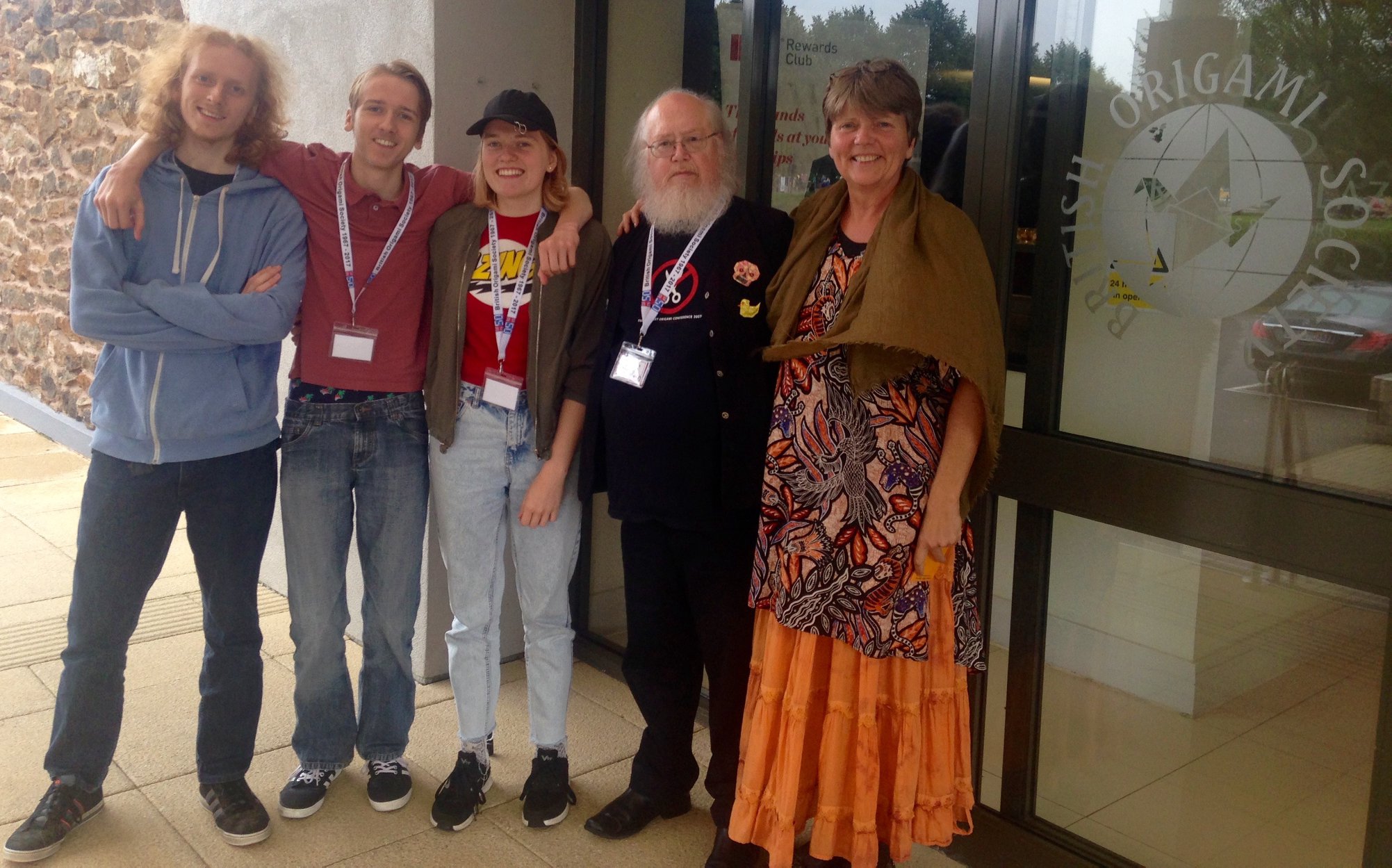 Many folders posted photos in tribute to Mark. 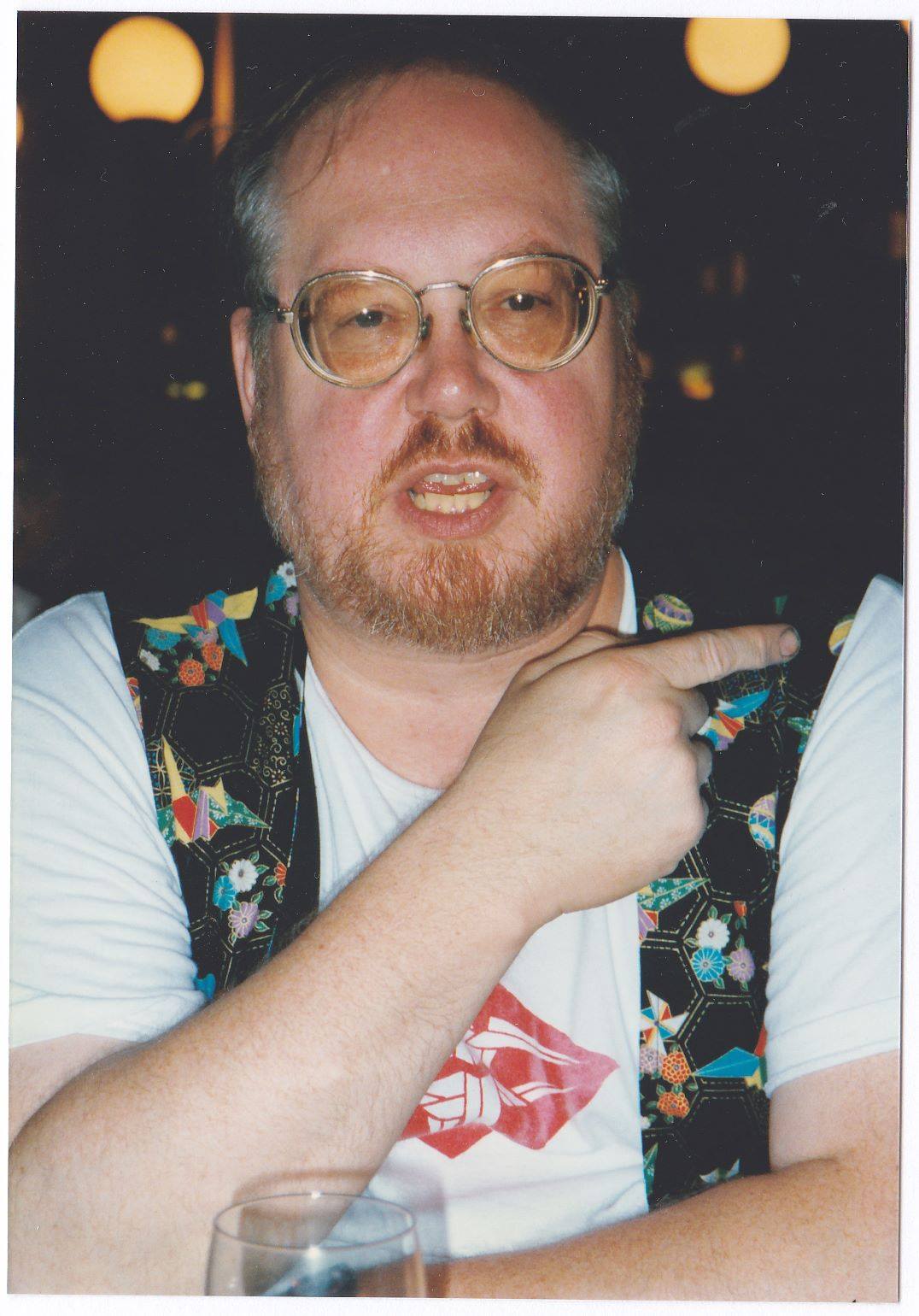 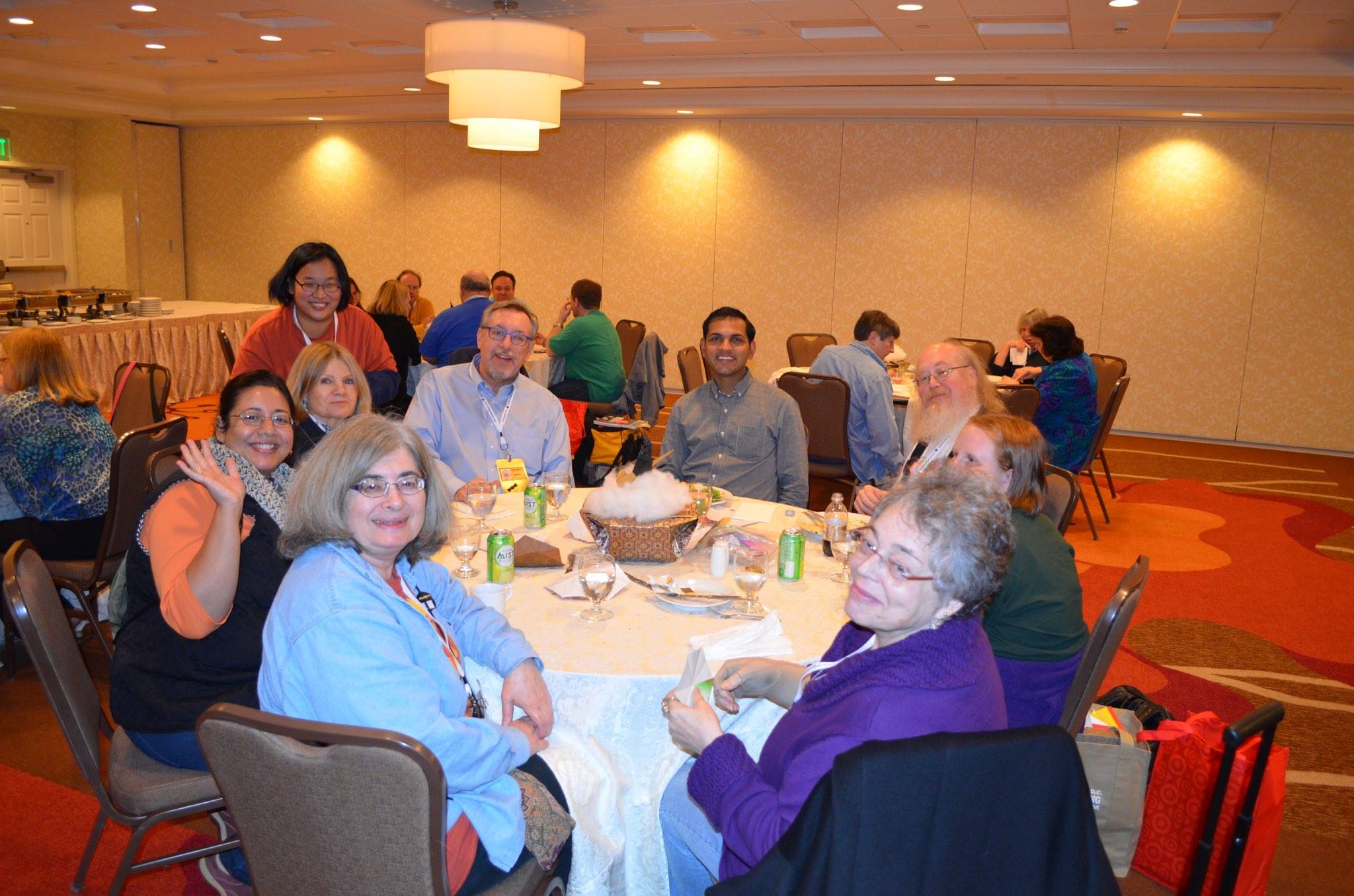 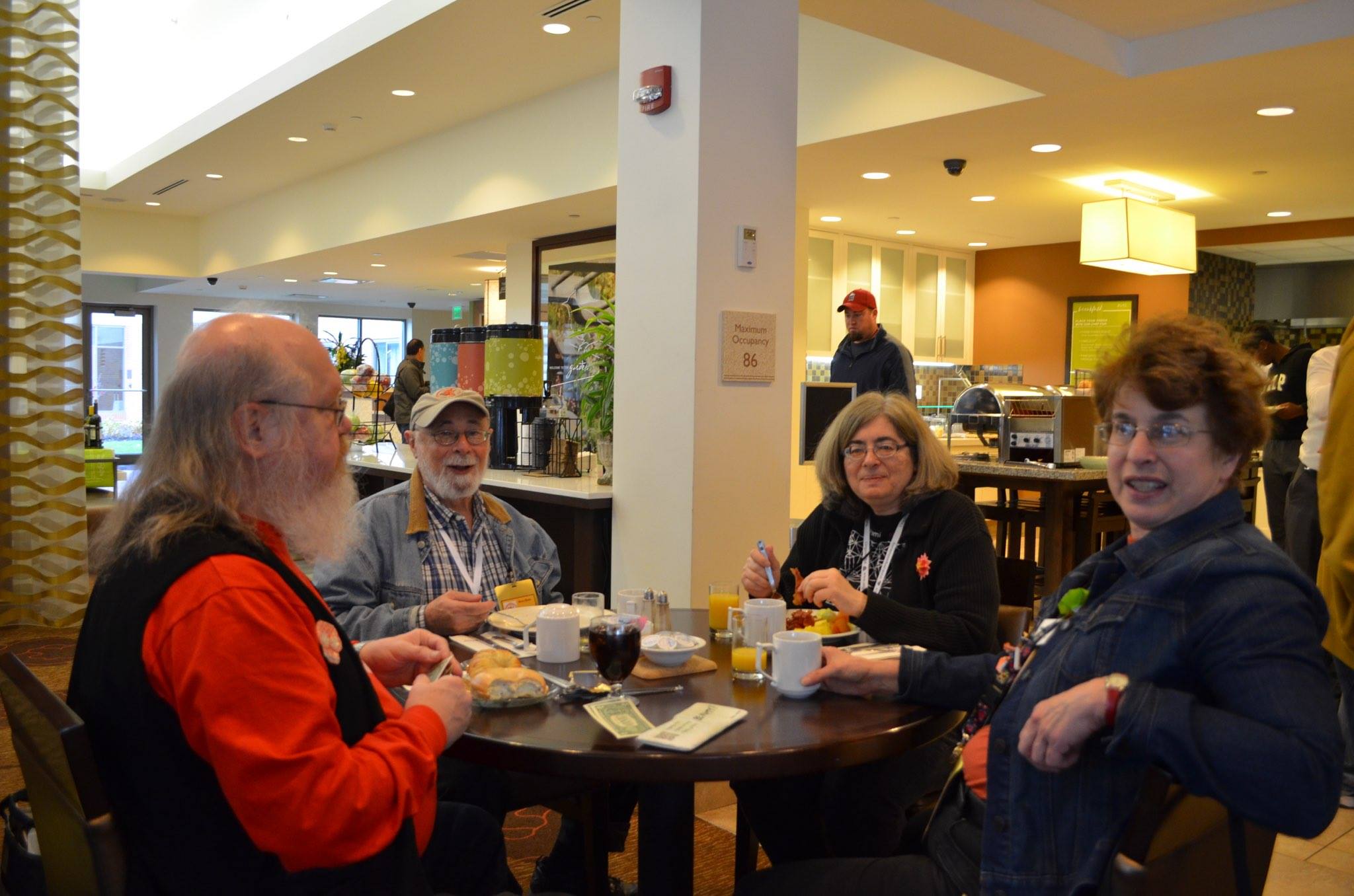 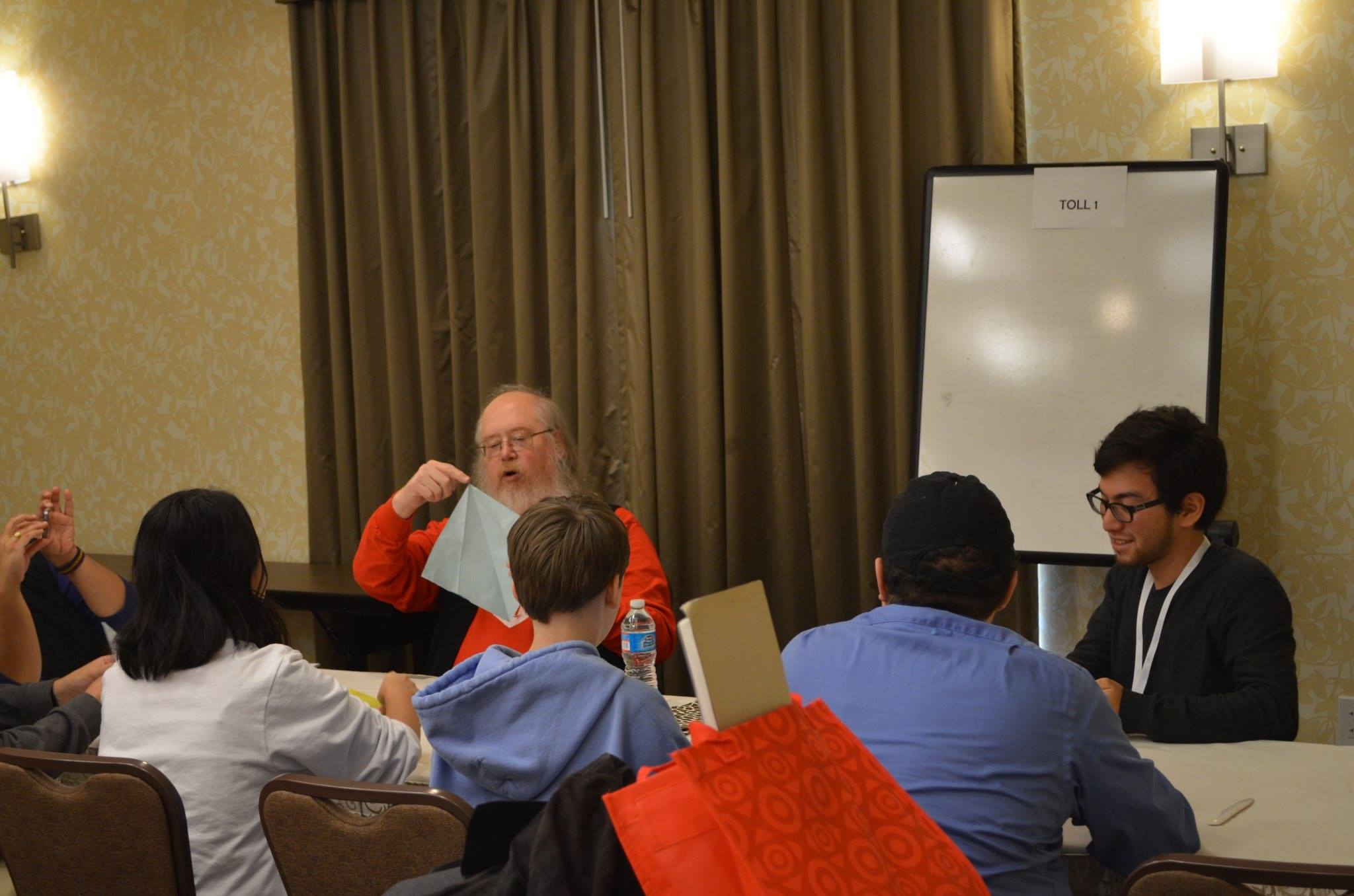 On 19 February 2018, a memorial service was held in Mark and Arlene's home to celebrate Mark's life. The occasion was somber, sad, but also joyous, as that was what Mark would have wanted. Here are a few photos: 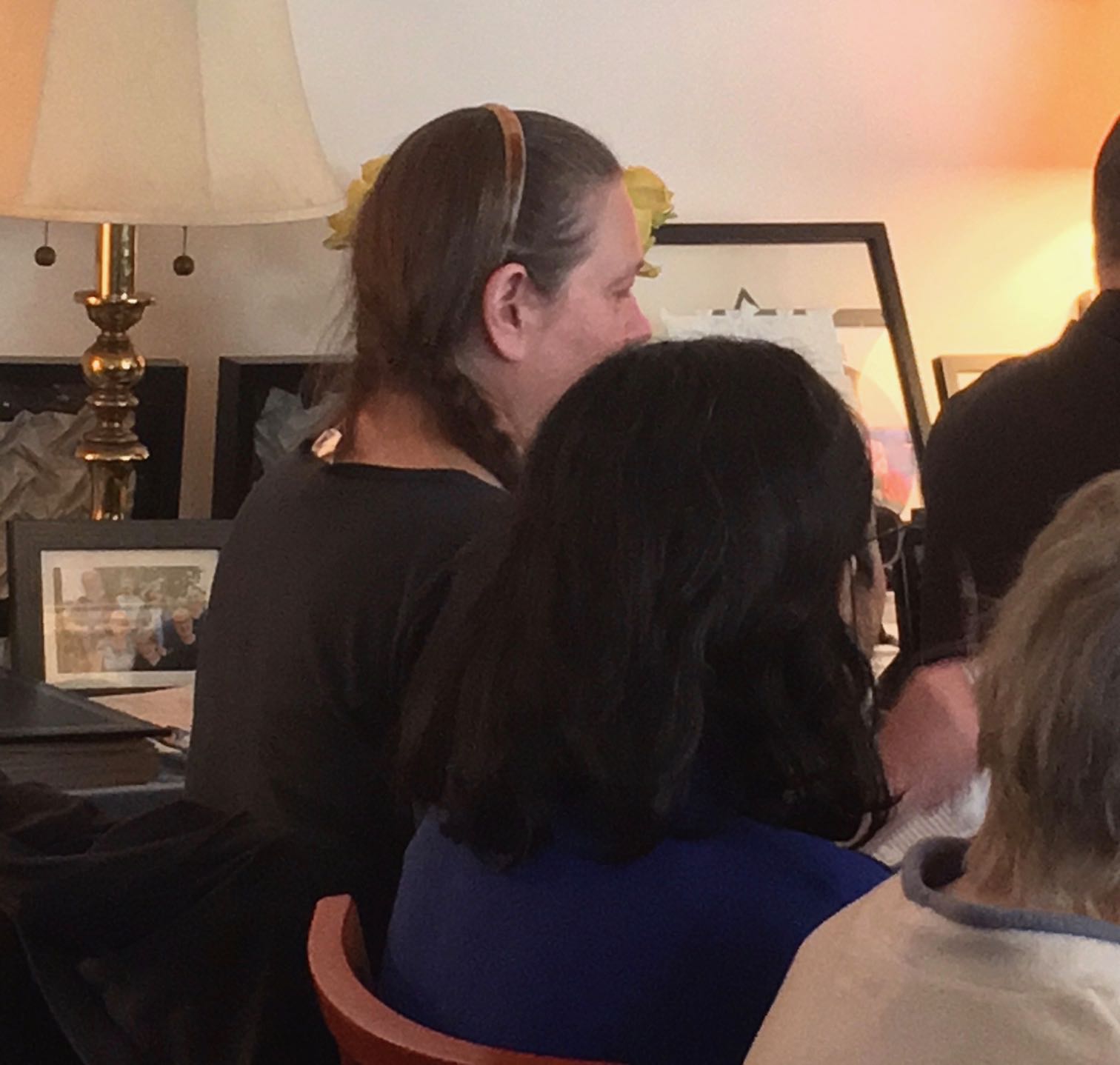 
Everyone sports a clown nose in honor of Mark. Photo by PW-I.