Welcome to Issue 54 of The Fold!

I hope you enjoy this edition. We have a brilliant crossword puzzle by Michael Schlossberg that morphs into a butterfly, a witch’s hat bookmark in time for Halloween by Francesco Mancini, an article about a tessellator (Michał Kosmulski) by a tessellator (Ilan Garibi) and a story about an origami birthday party.

As the new managing editor, I thought I might use a small amount of bandwidth to introduce myself and offer diagrams for my favorite origami design.

I love origami and editing and have pursued both for most of my life, so editing The Fold is my ideal volunteer job. I hope you, too, will participate in The Fold by sending articles, diagrams, ideas and suggestions: What is your local group up to? Do you have a diagram of seasonal interest? Have you visited an origami exhibition or convention? You can get in touch with me at jane.rosemarin [at] gmail.com or use the submissions form.

Minneapolis is my home, but I was born in New York City and came of age in the San Francisco Bay Area, so I’m really tricoastal (the latest trend is to call the Upper Midwest, which includes Minnesota, the North Coast).

I’ve designed around 30 origami models, and I particularly like to decorate my own paper either by hand or digitally in Adobe Illustrator or Procreate. In addition to exhibiting at conventions, I’ve participated in a few juried exhibitions and will have a show in St. Paul in June 2020. I get a small number of commissions each year from companies and individuals.

Mostly, I fold for fun. I’m in an artist trading card group and fold each month with Origami Minnesota.

CBP Boxes based on Thoki Yenn’s Crossed Box Pleat. I designed the papers in Adobe Illustrator and printed them with my pigment-based inkjet.

In the past, I was a visiting origami artist for a consortium of schools and once worked with a psychologist on an art therapy project for children who had been in a school bus crossing the Mississippi River when the bridge collapsed beneath them.

I would like to thank all the formidably talented people I’ve been working with:

The Turnip Box is my favorite of the models I've designed. I created it as part of a joint project with a printmaker, Emily Hoisington. Together we designed seven fruits and vegetables. Emily carved a woodblock with an agricultural theme and inked it based on the colors of the fruit or vegetable we were making. We created the group for “Shin Jidai,” a show of Japanese arts that appeared at the Minneapolis Center for Book Arts in 2012. You can see all the vegetables on my Instagram feed. 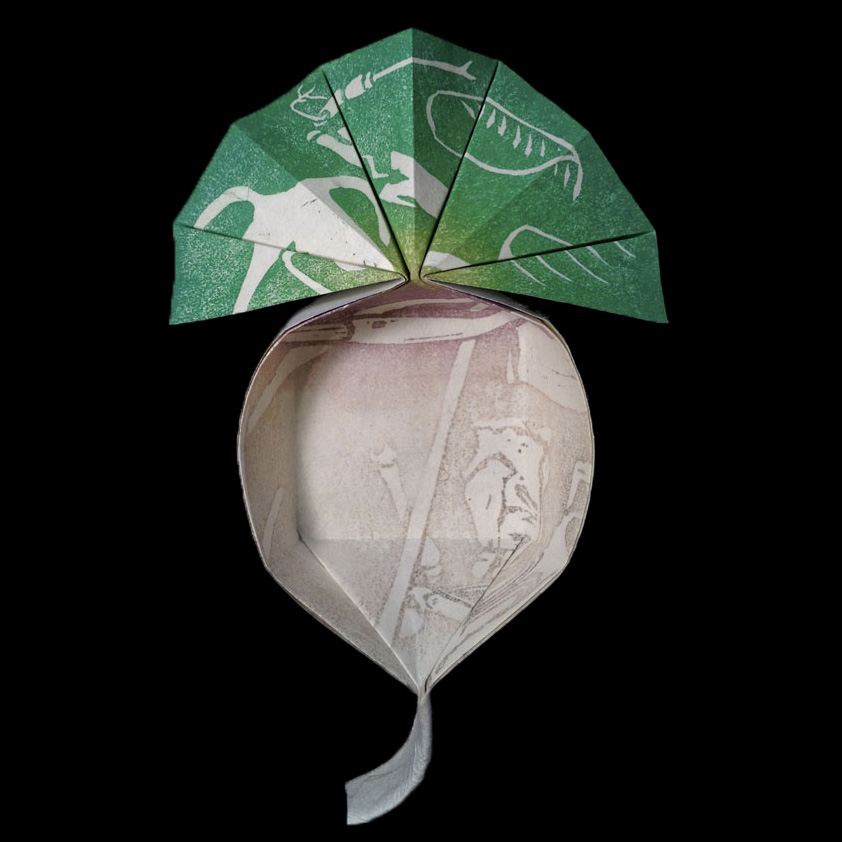