by Ilan Garibi
Edited by Patsy Wang-Iverson
biography
interview
diagrams
intermediate
For me, origami is reference points. From that point of view, there is hardly anyone who is farther away from me than Daniel. His origami is totally free from any references, and the paper to him is more like clay than a surface to grid first. I stared at him in disbelief as he was walking on the streets of old Lyon, with his hands turning the paper into a mask by mulling and gentle shaping. As always, ten questions to reveal the way Daniel creates his paper (and more) sculptures.

Who is Daniel Chang? Please tell me in five sentences what I must know about you.

Daniel: I would describe myself as mildly crazy in a creative sense. I'm someone whose mind often wanders astray and ends up creating stories by itself. Even as an adult I love fairy tales and fantastic stories. I'm open-minded, clumsy and sometimes a bit too self-critical. It's not always easy to approach new people, but when I do I enjoy talking and learning about new perspectives on life. 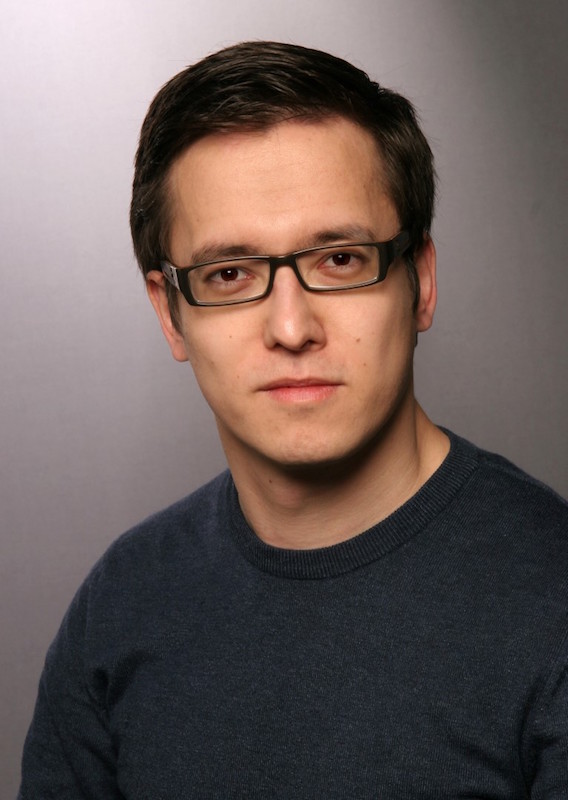 Daniel: In a lot of ways Origami to me is like magic. In one moment there is a plain surface and in the next it can turn into a creation full of character. Even though there are many limitations with Origami compared to other art forms it still amazes me how you can use your own imagination to overcome those limitations of the material and create seemingly impossible looking artwork.

The first model I folded was the Magic Star by Robert Neal that can be transformed into a ring. It was also the one that got me hooked on Origami. My first model to create was probably a simple star since I designed quite a lot of them when I was younger. My first figurative model though was a brontosaurus made out of the bird base that I mutilated horribly with scissors since I didn't know better at the time.

Origami changed my life, twice. When I first came in contact with it as a young teenager I realized that I found something unique to express myself. The second time it changed my life in a more unexpected way. I used to fold just by myself for years and felt quite content with it. As a college student I was folding during a seminar which I used to do quite often. This particular seminar was different though, because I saw someone folding paper on the opposite side of the table. She turned out to be also an Origami enthusiast and we would soon get together to hold regular Origami sessions where we'd inspire each other as we grew as artists. That someone was Melina Hermsen who you might know as "Yureiko" on flickr. Over the years I met more and more people who shared the same passion, and I realized that Origami can be a very social experience which lets you overcome distances and brings you closer to people.


Baby Fox
All pictures are by Daniel Chang


What is your muse? What drives your creative process? Do you fold other people's models? If so, do you have a favorite designer? What one origami book will you take with you to a desert island?

Daniel: There are many sources of inspiration I draw from, some are just random thoughts, or situations I encounter in my daily life and others are stories I feel drawn towards. Often it is my friends who inspire me or challenge my way of thinking. Looking at artwork outside of Origami also fuels my process of creativity. Particular classic and modern sculptural artwork is one of the main influences when it comes to new ideas.

I rarely fold models by other designers with the exception of simple Origami I fold with my students or models I fold during conventions. Still there are a lot Origami artists I admire or get inspired by: Eric Joisel, Giang Dinh, Hoàng Tiến Quyết and József Zsebe were the ones who had the most impact on my development as a designer.

The book I'd take with me to a desert island would be "From Angelfish to Zen" by Peter Engel. It was the first complex Origami book I got as a teenager, and I folded models from it for years. Even today I still know how to fold the kangaroo and the heart with the arrow from memory.


The first time I met you, a few months ago, you were folding only faces. Some of your earliest models were tessellations. You made a very interesting journey. What is your favorite topic to fold? Why? What takes you from subject to subject? Do you know what will be next?

Daniel:One of my favorite topics to fold is actually faces. I find it intriguing and one of the hardest challenges to create facial expressions. Just a slight modification of a crease or a curve can alter an expression completely. I like the challenge to create a face that feels alive with as few creases as possible. Other interesting topics to me are models that have something hidden or require a second glance to see. Simply put, I like odd ideas. Something that isn't quite as it should be like my winged creatures or "Skinny".

I do at times set an overall topic for a series of models like "human nature", which I then try to follow. Other times I transfer features like wings or techniques I learned onto the next model. In between there are also creations that have no connection to previous works.

I'm very interested when it comes to the human anatomy. I believe there is still a lot that can be explored through paper, so I'd like to focus on that next. 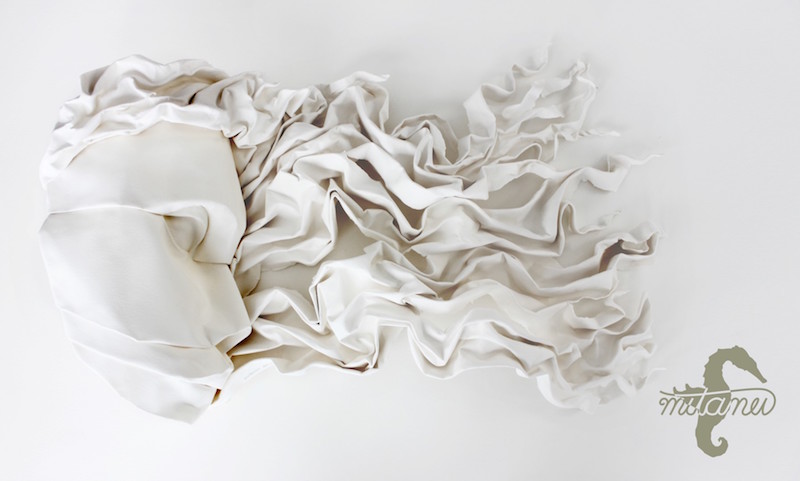 I saw you folding a face, and it seems you do not follow any reference points. I realized you sculpt the paper to your will, like it was wet ceramic. Can you shed some light on your work process? Do you plan in advance or doodle with the paper? Do you make sketches first? How long is the process? What type of designer are you?

Daniel: Depending on the idea, I often plan ahead using photos as references for designing. Sometimes I use sketches for technically more complex ideas, which consist mostly of very rudimentary crease pattern and stick figure drawings. The main part of my design process happens when I start to fold. It is not so much a mathematical approach I follow but rather an intuitive one where I let the paper guide me. This is especially true for my wet-folded models.

When I design it can happen within minutes, and sometimes it takes years depending on the complexity of the model and the right technique. The process of folding the actual piece mostly takes me several hours to complete.

The way I work and create with paper feels often more like sculpting than traditional folding to me. Some of the techniques I use for my faces are very similar to the ones used working with clay or ceramic. I actually adapted some of them from researching clay sculpting to fit the shaping process of paper.

Of course paper doesn't have the same properties as clay, you cannot add or subtract something but using wet-folding you can press soft shapes into the material with your fingers or with tools similar to the way you would do with clay. To do so I use curved folds to bend and to a certain degree stretch parts of the paper to create tension which generates the illusion of volume. The bent and curved areas depend on each other and determine what is possible. For example, a curved eyebrow allows shaping the upper eyelid, the creases for the nose influence the way you can shape the cheek muscles and also the way the upper lip will bulge.

What papers do you usually use? Why? Do you prepare them yourself? How do you decide what paper to choose? Do you try to match the paper to the topic of the work?

Daniel: I mostly use thick Arches watercolor paper with either 185g/m² or 300g/m² for my wet-folding sculptures. For more technical models I prefer double tissue paper, which I glue together with methylcellulose. The topic mostly comes first, and then I choose the paper accordingly.

I do also like to play around with different materials so it can happen that the material itself has an artistic meaning within the topic. An example for that is my "Goddess of Cats", which was folded from papyrus and painted with gold. I'm drawn to non-typical materials that might not seem like a good choice to fold, like metal mesh, bark or heavy water color cardboard but makes them even more interesting in my eyes. 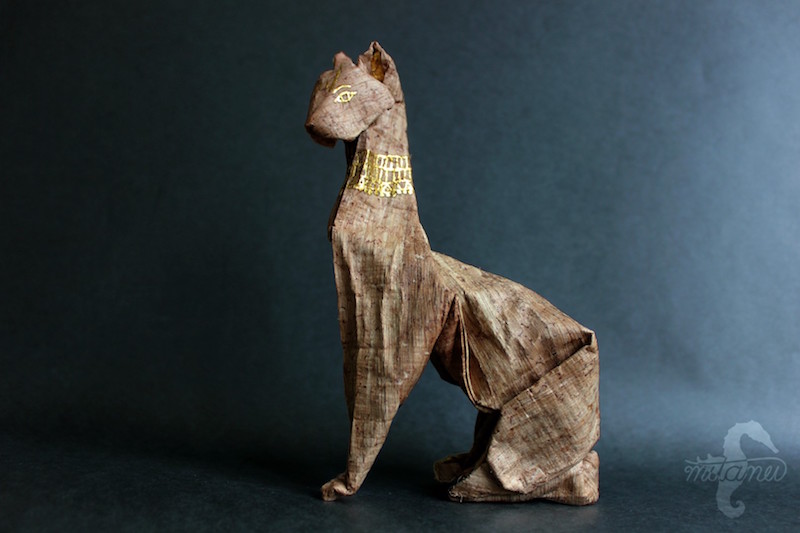 Daniel: It is important to me to treat people in my life with respect and kindness and to have a positive impact on my surrounding. Origami is a part of this motto since it is not only a creative art form but also something that brings joy to people and at best is able to inspire them. It is not a single specific message I try to convey with my art but many different ones. Sometimes I like to inspire people and sometimes I like to provoke. Often there are tales and metaphors hidden in my artwork that relate to human emotions. 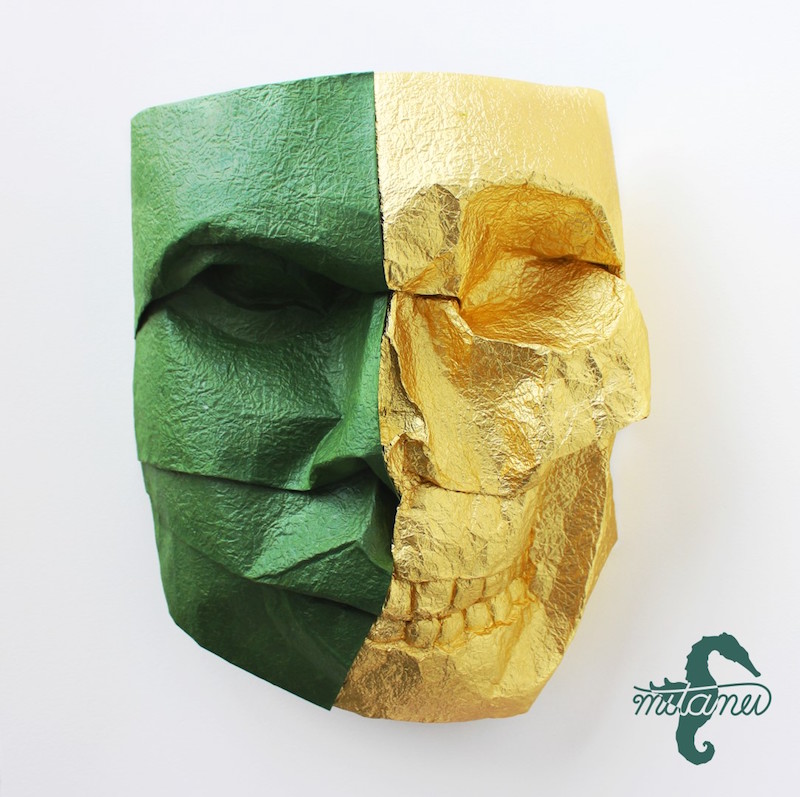 Daniel: The one model I'd like to point out is "Leap of Faith". What I like about it is not so much the folding process or the complexity but the story and the meaning of the piece. It is an elephant with wings standing on the edge of a rock as he faces the abyss. Even without considering the absurdity of a flying elephant, it seems unlikely that such a massive creature with such tiny wings would be able to leap and soar though the night sky. Still it is a nice thought to me as the wings add a fantastic element to it that lets you hope for the impossible.

Daniel: Where do you see Origami as art advance to in the future? 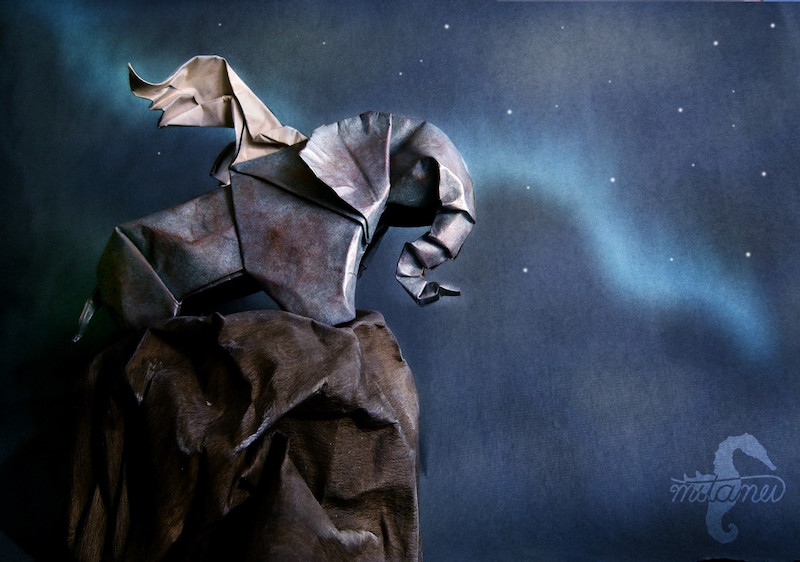 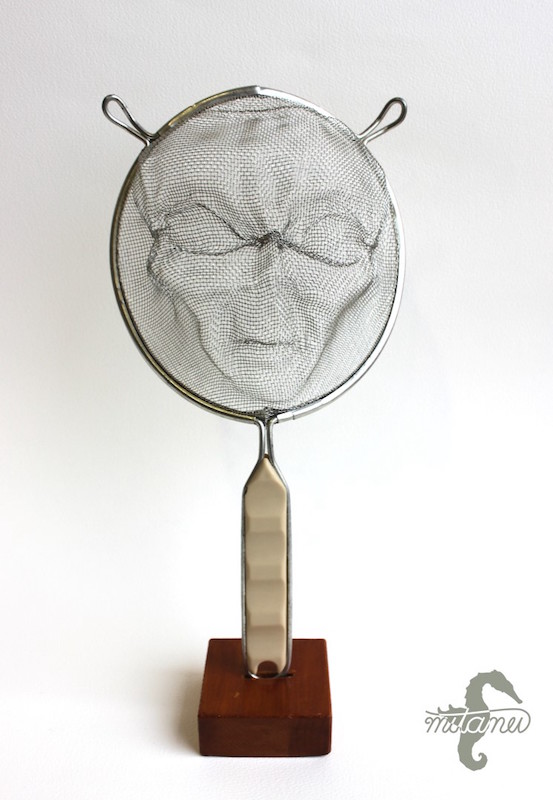 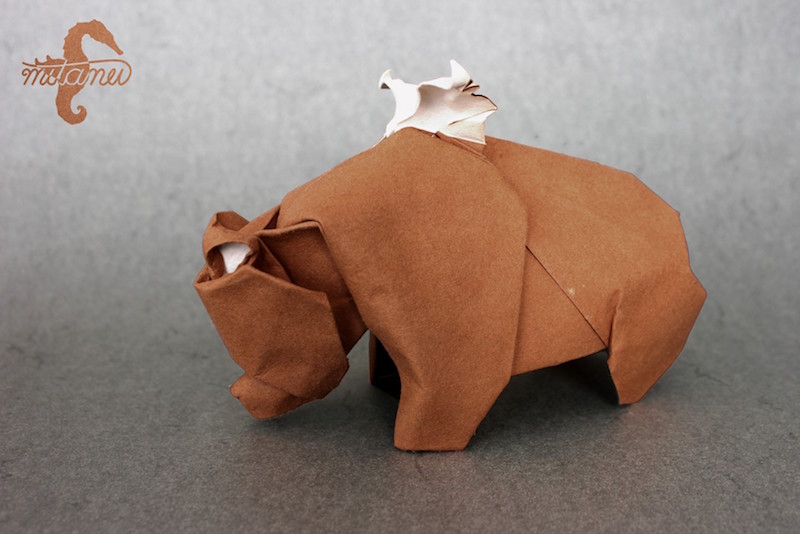 To really know a designer, you must fold his models. Here are the diagrams for the Winged Bear.