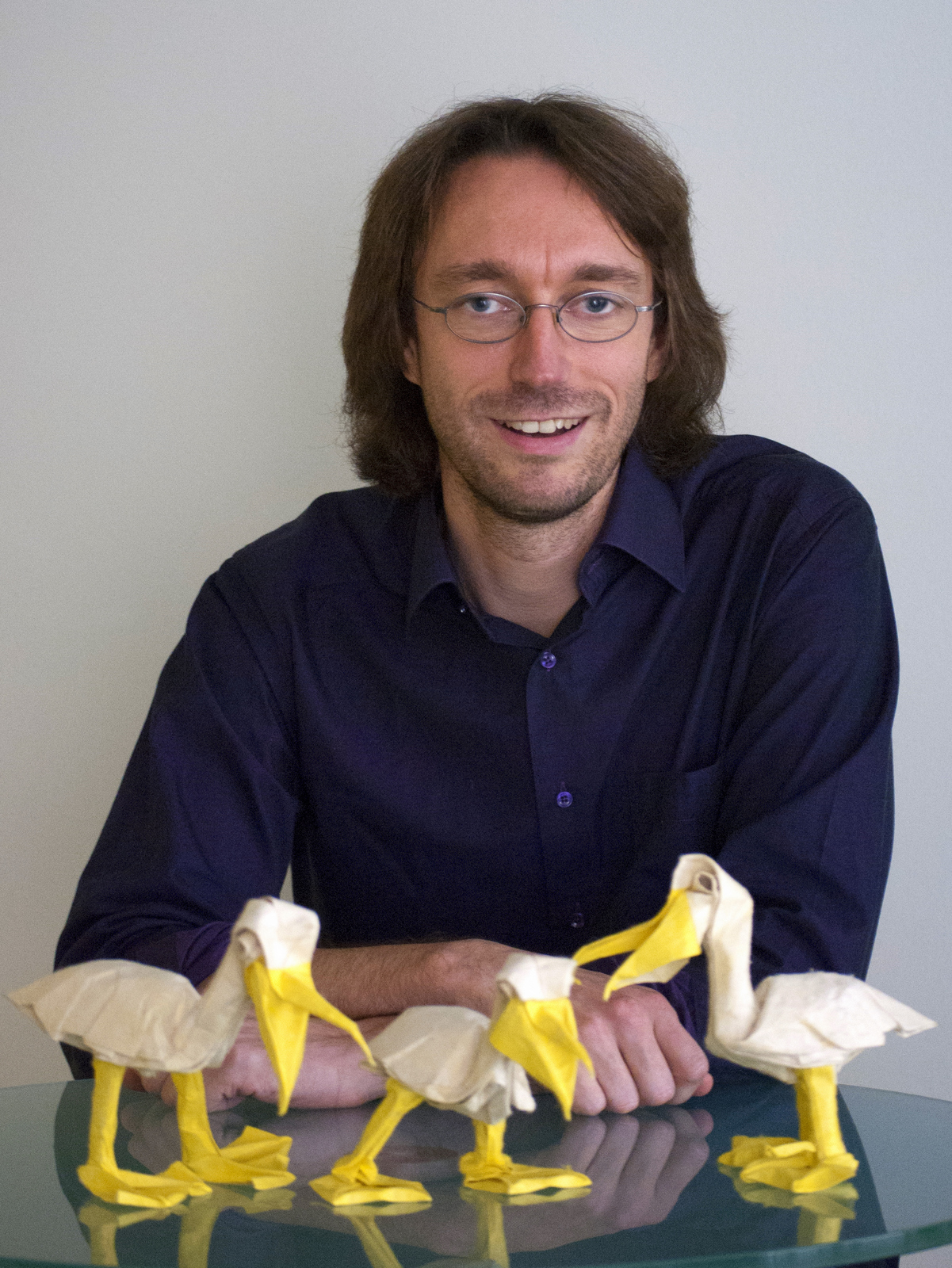 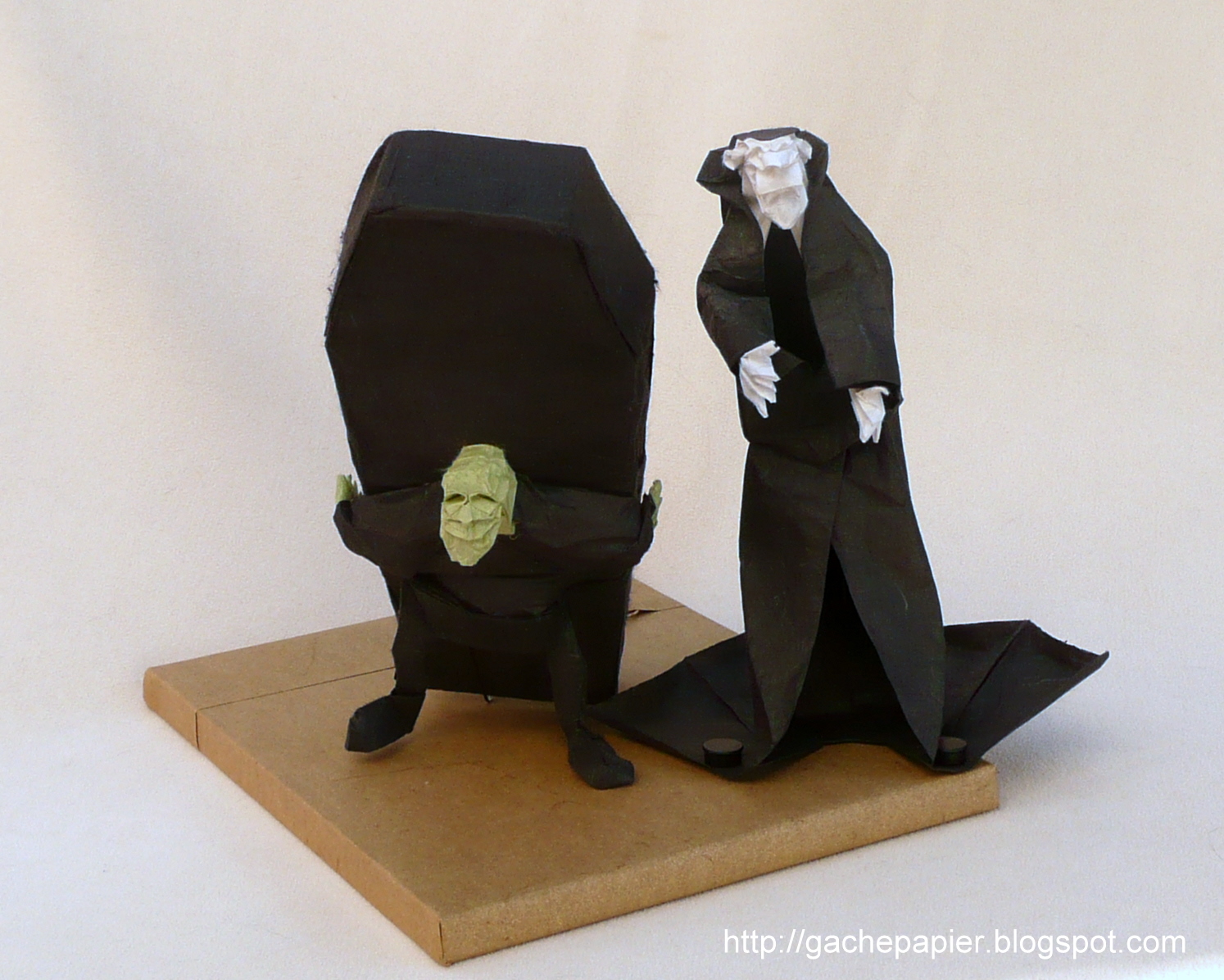 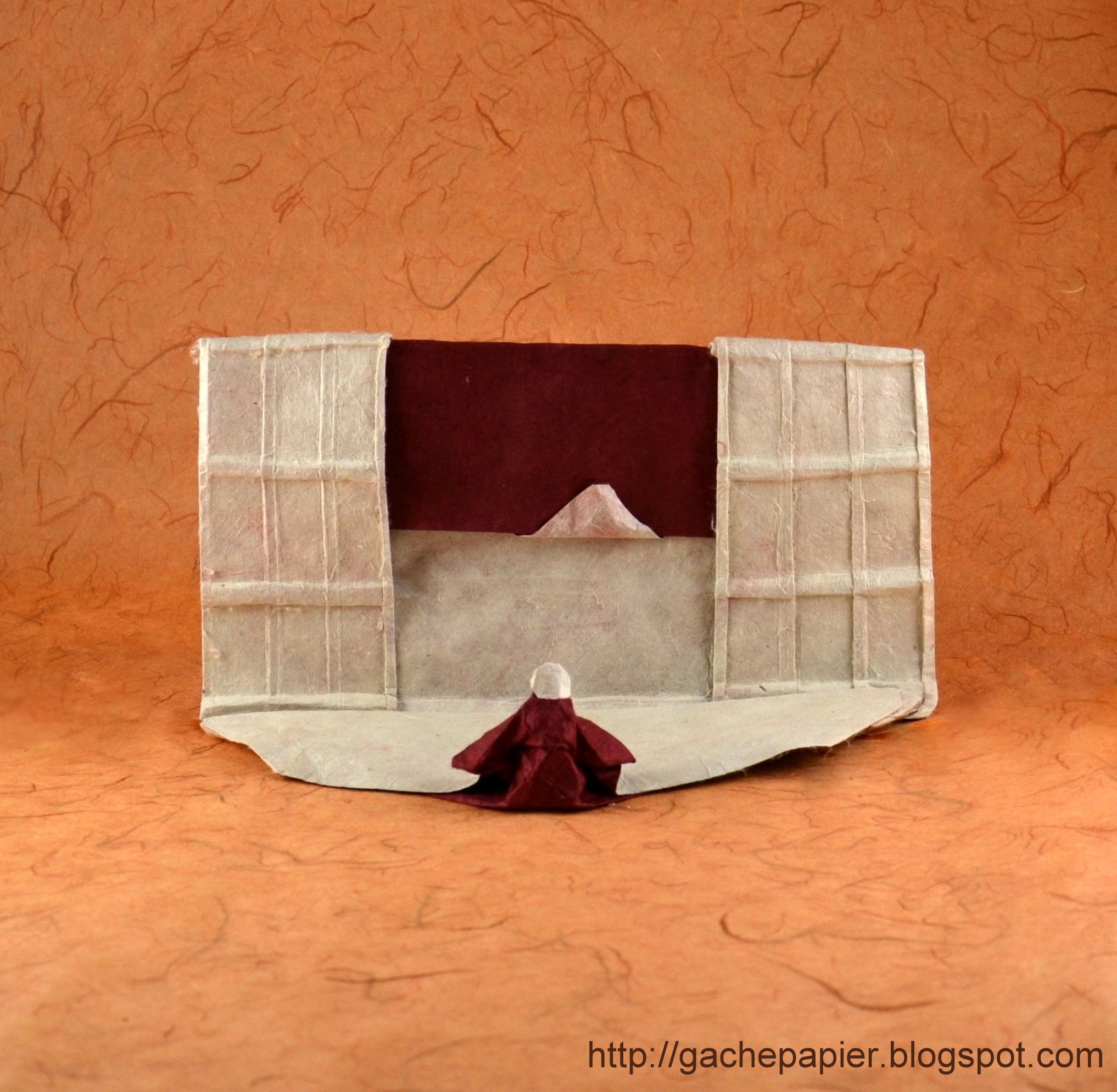 I am always surprised to see how big the gap is between my mental image and the real person, as he is discovered from his answers. Such is the case here. Better known as Gachepapier, David, the origami designer shed some light on his true self and his creation process. As always, 10 questions with eight answers, as one of the answers is just another question.

Who is Gachepapier?? Please tell me in five sentences what I must know about you.

Gachepapier: "Gachepapier" is David's origami loving alter ego, born from his online presence on the French origami forum. As an isolated folder, the Internet was invaluable and soon required an alias ("gachepapier", lit. paper-waster) which soon came to represent all my artistic endeavors. This has reached the point that many fellow folding friends have come to call me "Gache", which I've come to find endearing. Underneath "gachepapier" there's a mixture of a geek, physicist, free thinker, escapist, family guy, dreamer, procrastinator and plenty of other things, I suppose.

Gachepapier: Origami, to me, is a good framework for invention.
Origami is interesting because of the tension between of the constraint and expression. On the one hand the constraint of shaping a surface without cuts is tremendous; you cannot fold a perfect sphere for example, arguably one of the simplest shapes of the visual arts. And on the other hand the maths behind origami show that there is nothing you cannot fold up to an arbitrary level of accuracy (with an arbitrarily thin or large sheet, anyway). But the actual fascinating challenge lies in the equilibrium one must find between how far one is willing to go to approximate a given shape and how far you'll manage to make the observer forget it's origami.
The first origami models I folded from a book were Montroll's simple sea creatures, a book I'd bought on a whim for my daughter to keep her busy. Being about 6 years old, she found these too hard, so I helped – that's how I caught the bug.
Origami has had an unexpectedly large impact on my life. I've met plenty of people worth meeting thanks to it and it has channelled a lot of my creative urges with results that have far exceeded any hopes I had for it.

What is your muse? What drives your creation process? Do you fold other people's models? If so, do you have a favorite designer? What one origami book will you take with you to a desert island?

Gachepapier: Unfortunately, my formative background doesn't include much in the way of visual arts. But as a Belgian, part of my upbringing and culture is to be found in comic books, mostly the French and Belgian variety. These showcase a lot of caricatures, fantasy settings and creatures that fascinate me it would seem (even if this remains an unconscious process). Don't think of Hergé's "Tintin", but more of artists like René Hausman, Comès, Loisel, and many others, though I do realise their fame probably does not extend far beyond the borders of French speaking countries. A good movie analogue of such graphic universes would be Peter Jackson's Lord of the Rings trilogy.
When I set out to fold something, it usually stems from the will to represent a humorous character, a personality or a particular mood that makes me "click". A model which has some of the punch that a portrait or some single-panel comics (like Gary Larson's "Far Side Gallery") can achieve is definitely one that I'll be happy to have invented.
I don't fold many models by other authors very often any more, mostly because of lack of time. But I still buy books just to see what and how others fold. I do have a few favourite authors, such as Joisel, Stephan Weber, David Brill, as their models are amongst the most expressive I can think of, along with Quentin Trollip's which I often find touching. If I could only keep one book, it would be Eric's "The Magician of Origami", though I would try to sneak Robert Lang's ODS in as well. 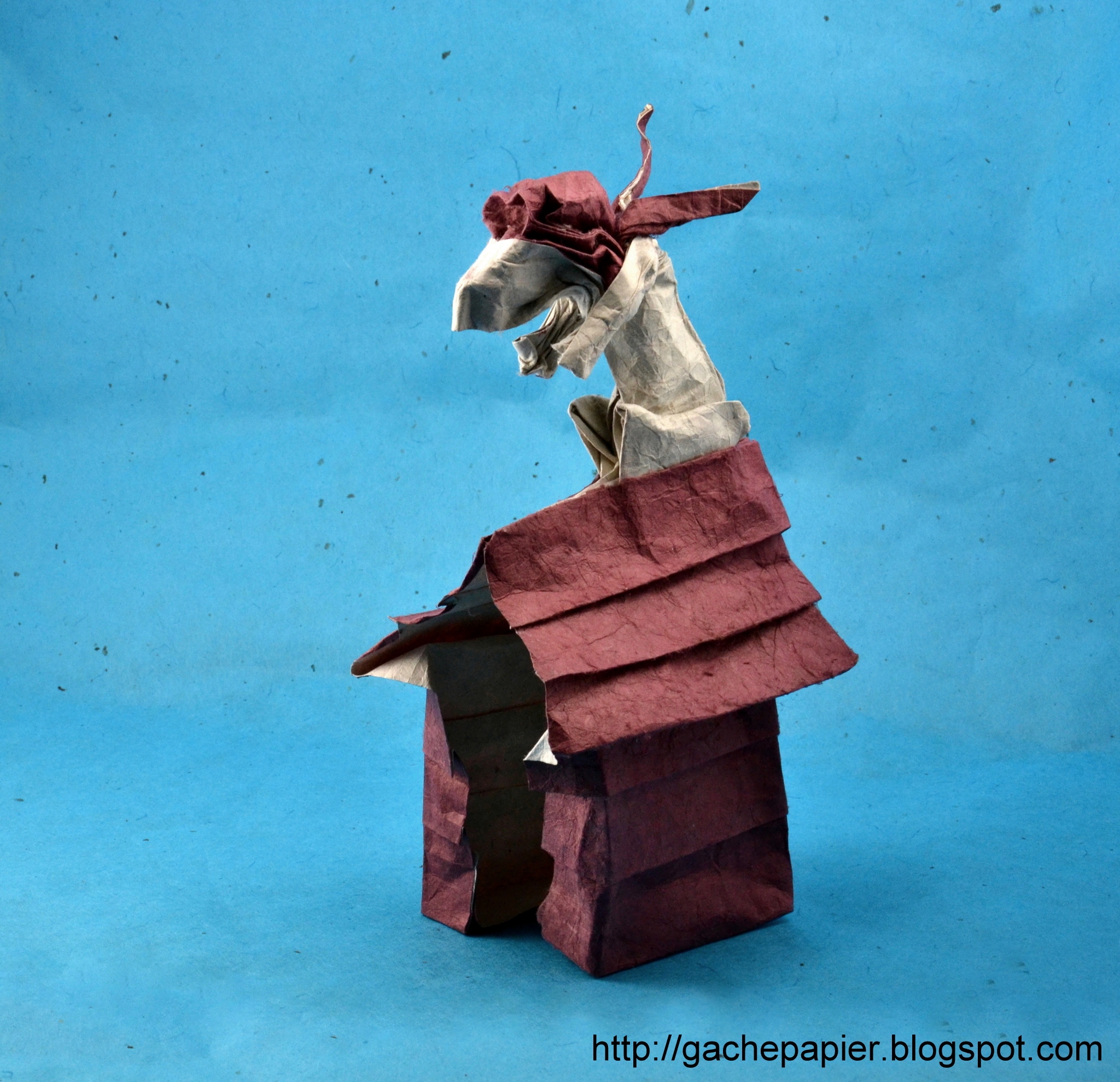 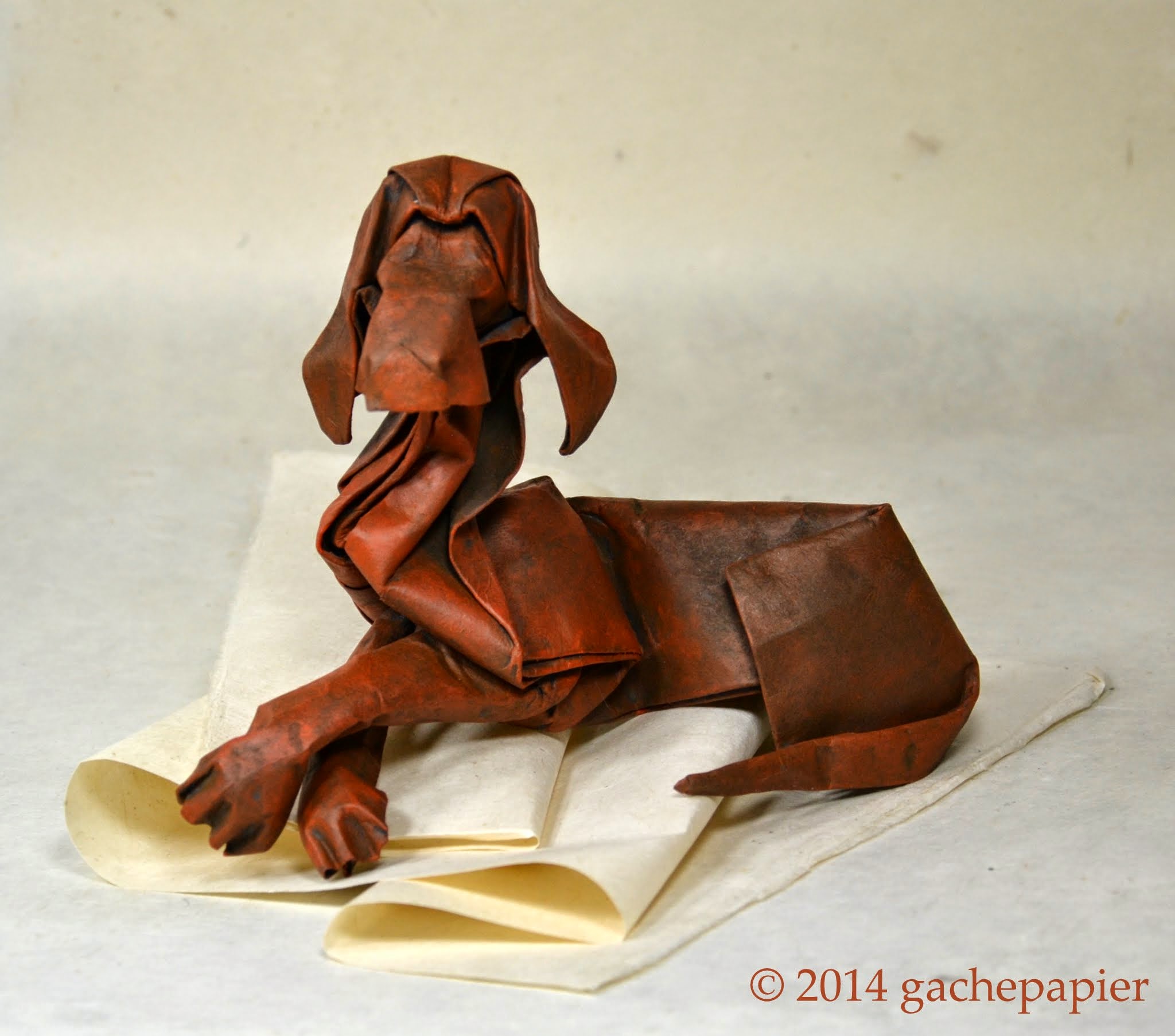 "Personality goes a long way".
Lokta paper has got personality. 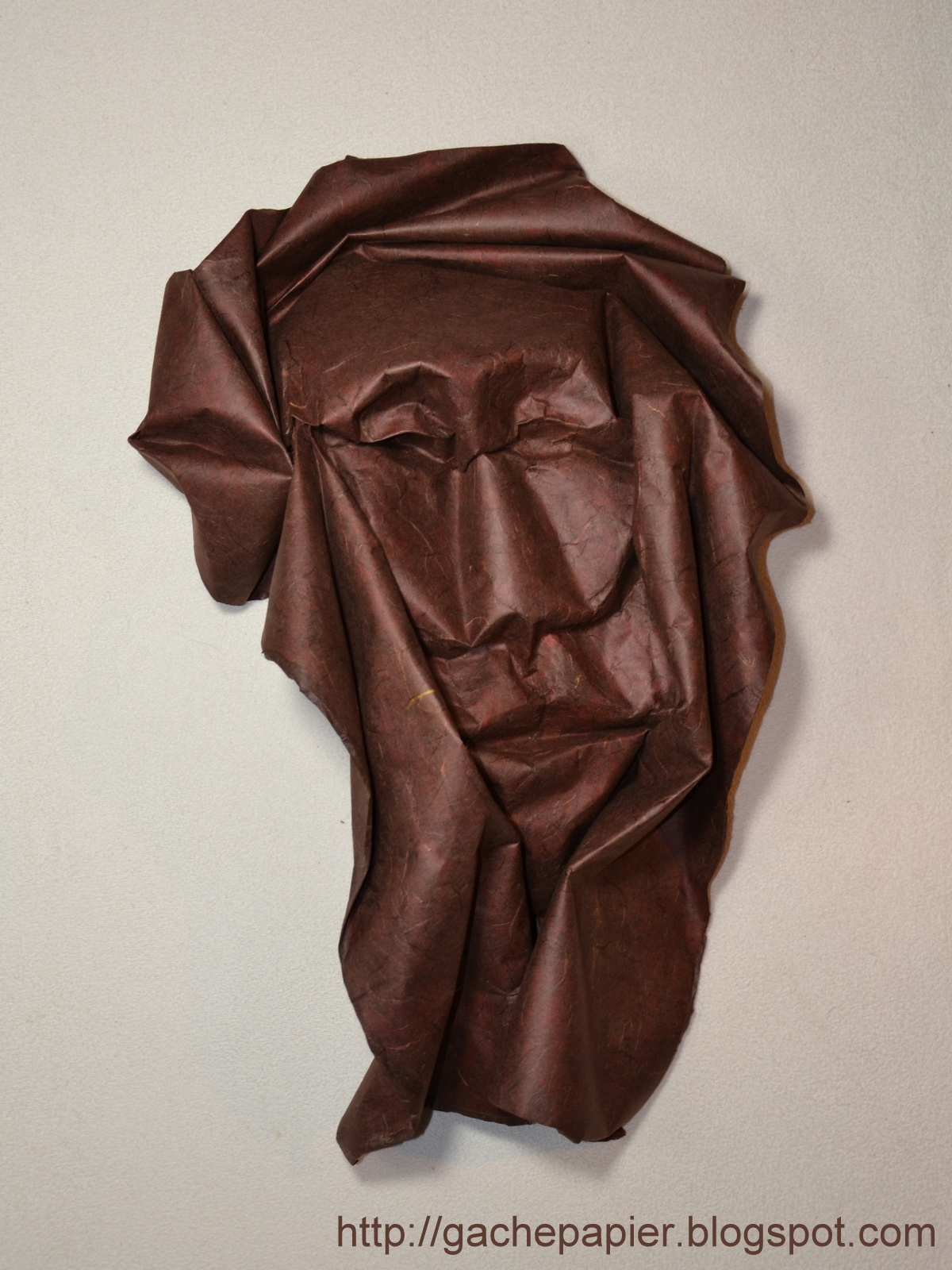 Your portfolio is all figurative with a huge diversity of topics. I see no modulars, and tessellation for you is only a technique to use. You make buildings and nature scenery images: animals and faces. How do you choose your topics? Some of your works are telling a story, showing a scene more than a figure. Tell us more about those creations.

Gachepapier: Paulo Mulatinho once asked me whether I could create abstract models which would have some artistic qualities, but I cannot say that I have come up with a satisfying, positive answer, probably because I'm not very good at decoding such creations myself, unless the sort of message one is looking for is "maths are beautiful".
I think that a common thread linking most of those models of mine which I like is that they have a little bit of a narrative quality. Packing several elements which evoque some interactions between them into a single sheet is extremely rewarding to me.

Can you shed some light on your work process? Do you plan in advance, or doodle with the paper? Do you makes sketches first? How long is the process? Making a desired shape, like the Pisa building, asks for accurate planning, while many other works of yours, like the faces, seem more free flowing without exact reference points. What type of a designer are you?

Gachepapier: The answer to all of these questions will vary very much from one model to the next. If I consider my models as a whole, the answer really should be "all of the above", from doodling to complete pre-calculation with everything in between. The models I enjoy inventing most are those in the "in between" part of this answer: starting with a concrete idea that takes a bit of rough "guesstimating" but having to improvise to get there. Typically, my masks fall into this category, which makes them a lot of fun to fold, even if they're the hardest to force into the face you're looking for initially. But with some experience this gets slowly better. More obvious examples for such partially planned partially improvised models are my Witch Tree and my "Curse you Red Baron!". I have most fun when I am a half-planning half-intuitive designer. 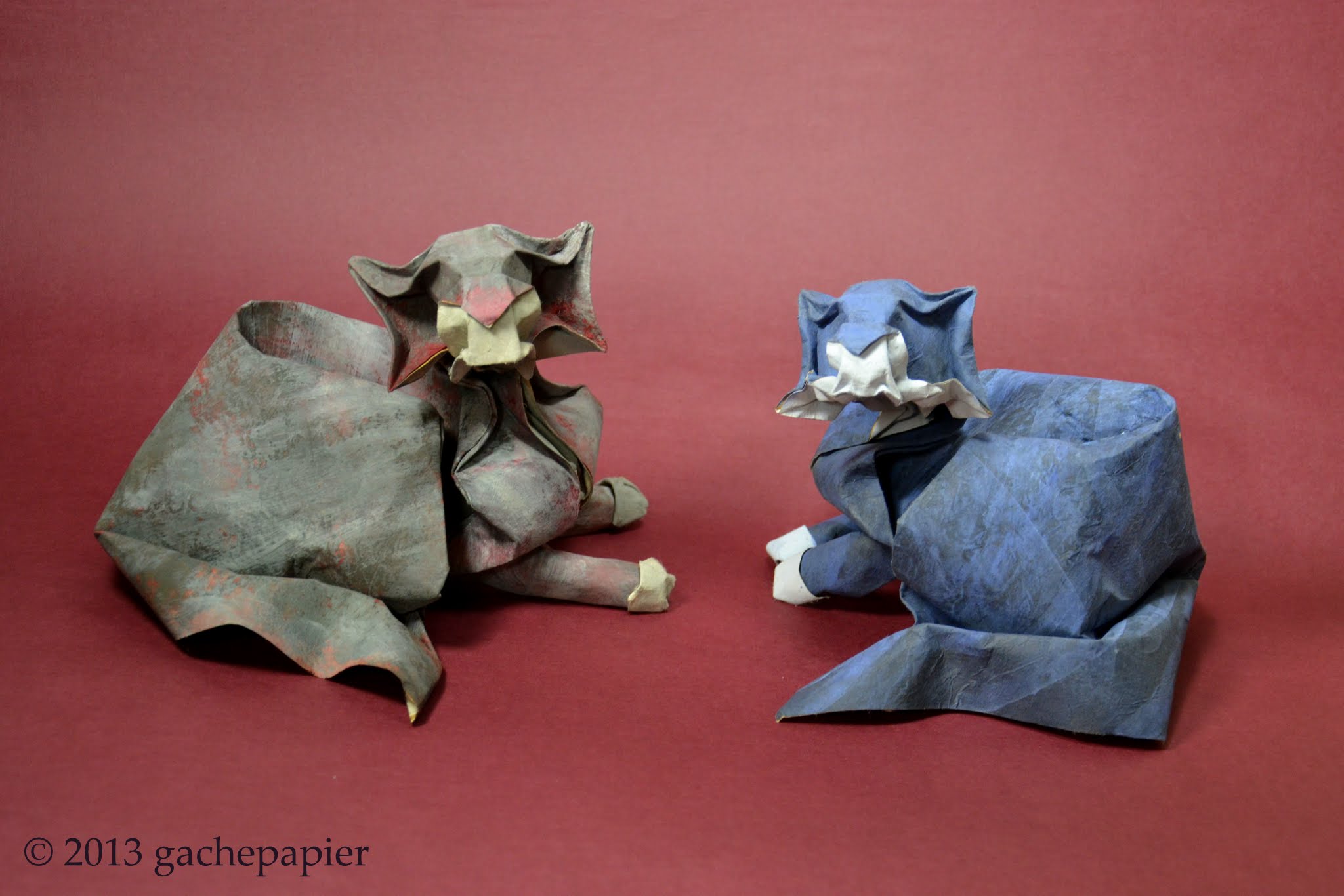 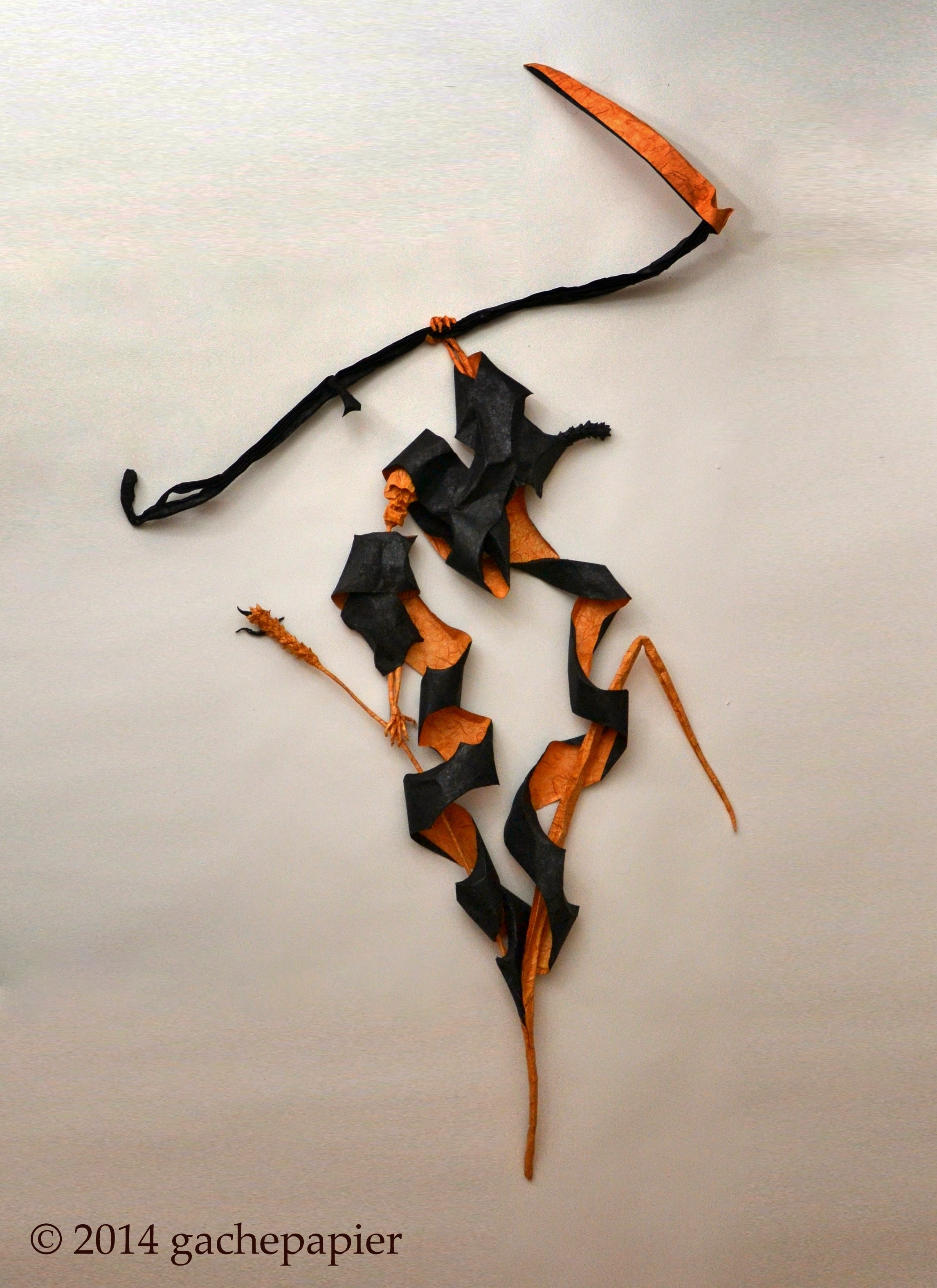 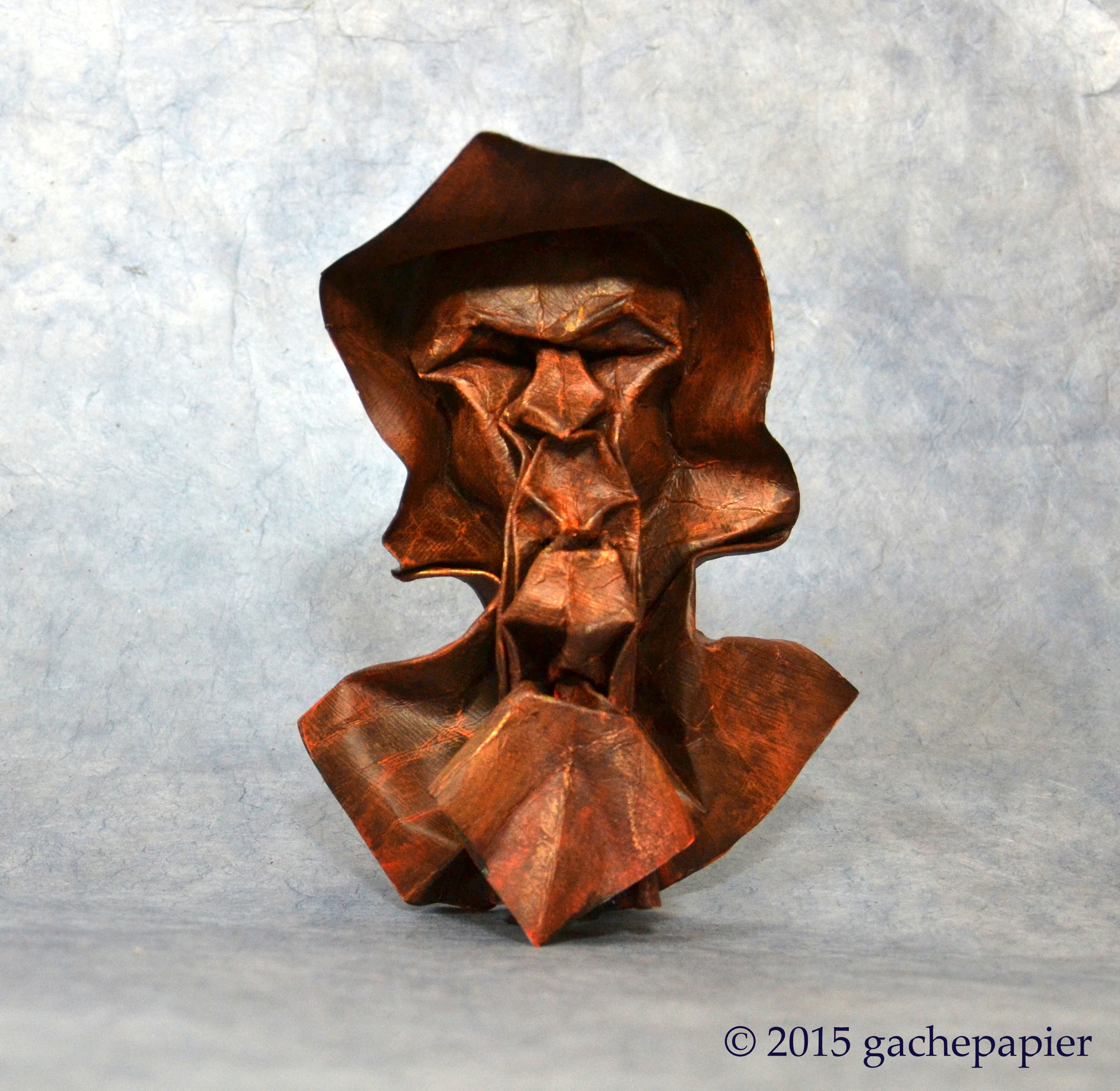 
All your works have a watermark on the paper you use. It has a unique texture and curves. What papers do you usually use? Why? Do you prepare them yourself? How do you decide what paper to choose? Do you try to match the paper to the topic of the work?

Gachepapier: The "intuitive" part of my folding process is usually rough on the paper and – if I can – I will fold any model I create exactly once, because I often have more ideas than time. But such a folding process only became possible after I found papers that are forgiving and will allow at least some backtracking. When I found paper made from lokta pulp, I knew I'd found a winner; its texture is beautiful, it is strong, relatively thin and will hold its shape nicely if you prepare it with methyl cellulose. Of course lokta is not an adequate paper for all of my models, for example the physical constraints implied by my experiments with several meter long paper strips or my masks often require much thinner and much thicker papers respectively – there would be little point in ignoring such constraints.

Gachepapier: I haven't come up with a motto, or really ever bothered to. Life's good to me in general, even though I find that it's too short. "Life's short" might be a good one...
While my origami is not part of any conscious philosophy, with all the time I've poured into it, it must reflect more of my moods and outlook on life than anything I ever put out there. If there is anything I would like to show deliberately with my models, it is that it is possible to convey meaning that goes beyond the mere figurative with origami. Folding a particular animal just because you can is not very meaningful. But if you manage to give it something that comes over as personality or a strong symbol, you're that much closer to art than to craftmanship.

Gachepapier: "Poison". With that model I've come closest to folding a subject which I find evocative of an interesting story, that of the rye ergot. That black fungus has throughout history been responsible for delirious hallucinations, illness and death, as it not only contains the natural precursor of LSD but also other various toxic alkaloids. It also appears to be a major source of superstitions linked to sorcery and the persecution which followed, thus making western folklore a lot more "interesting" than it could have been – quite horrible, but it's still a really rich source of inspiration. Currently the model is at the wonderful EMOZ museum, but it has to my knowledge not been been exhibited yet, it's not an easy one to display.

Gachepapier: How much satisfaction can one derive from visibly imperfect models? 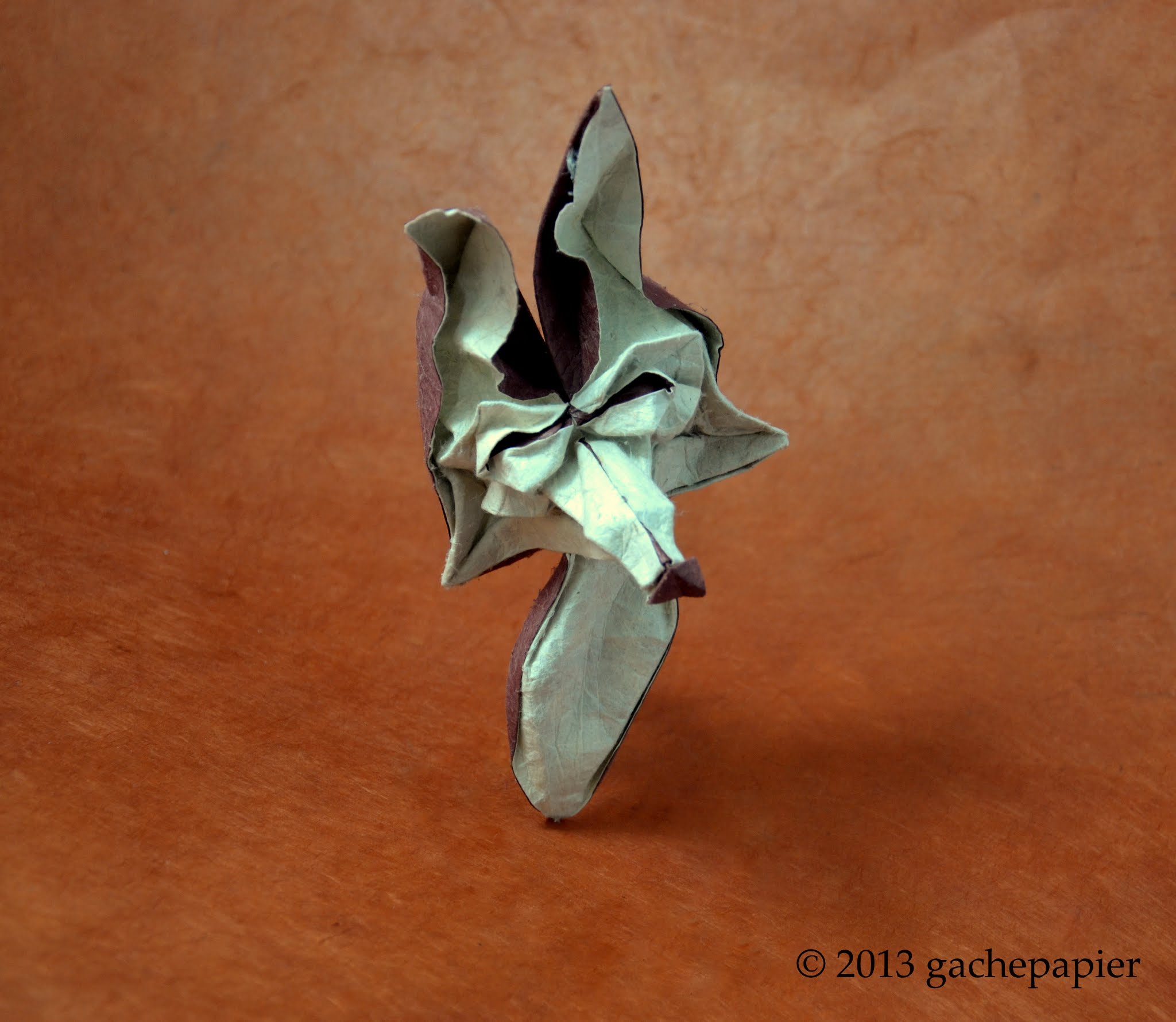 Coyote – once you've finished going through the diagram, squeeze his neck and keep on shaping!

To really know a designer, you must fold his models. Here are the diagrams for The Coyote. Please note the file is big and download time may be long!