Just like artists who can draw a whole world on a grain of rice, Rebecca manages to create a flourishing portfolio from a single object – a pot. With a unique approach, a skillful brush, and strong fingers, her works are standing out in the origami world. We have never met, and this interview was a great opportunity to understand how she works.

Who is Rebecca Gieseking? Please tell me in five sentences what I must know about you.

Rebecca: I'm very interested in the intersection of art and science, whether that's applying scientific processes to art or using visual approaches to learn or teach science. I spent two summers doing art conservation, where I developed an interest in the science of paints and other art materials. I tend to be a bit overly organized and analytical, sometimes to a fault. I can easily get drawn into new, interesting puzzles, especially ones that require visual logic. I'm quiet and introverted, but I love talking about my designs and sharing ideas with other people. 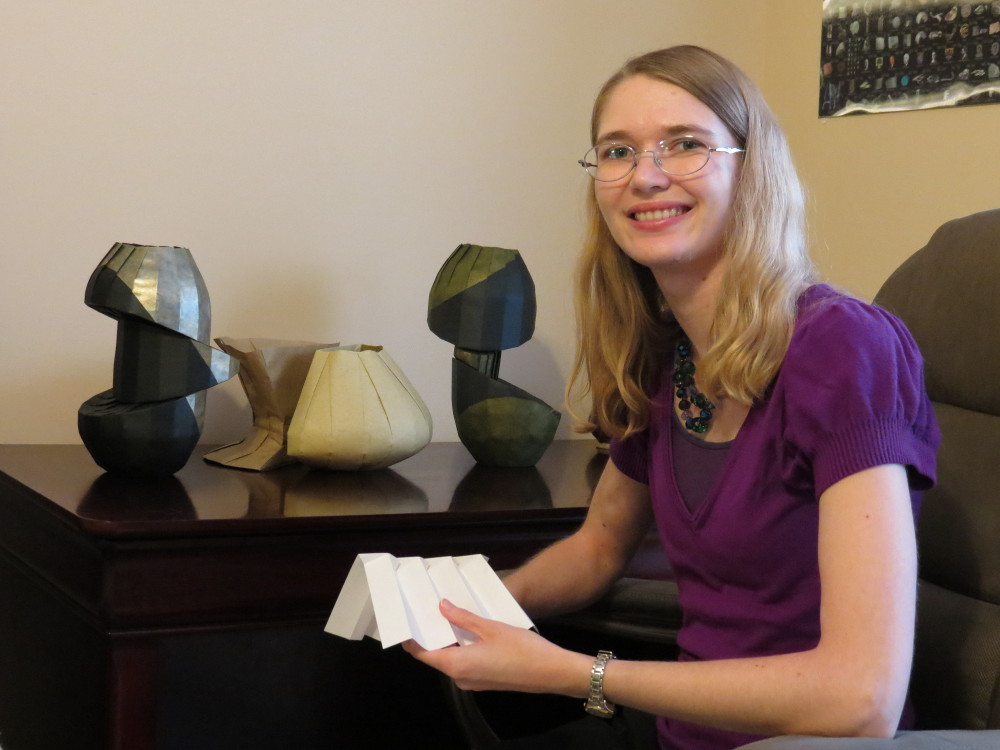 Rebecca: I started origami at a very young age, and by the time I was six, my favorite model was the traditional samurai hat. I didn't start designing until 2011 and very quickly found the style I still work in. At the time I needed an artistic outlet that fit into my grad school schedule. What keeps me interested in origami is the ability to keep innovating and developing new folding approaches that create new and interesting forms. It's always exciting to figure out an elegant way to fold something I've wanted to do for several years, and when I figure out something new, I come up with all sorts of ideas of how to use it.

Origami (and art more broadly) has actually been a big help in my full-time job doing chemistry research. The research process is mainly a cycle of coming up with ideas, testing them out, and figuring out what worked and what didn't, often on a time scale of months. In origami, I'm able to practice that whole cycle in a few hours or days, which helped me learn how to do research well. It's also helped me develop my skills in thinking in three dimensions, which I use extensively in chemistry. 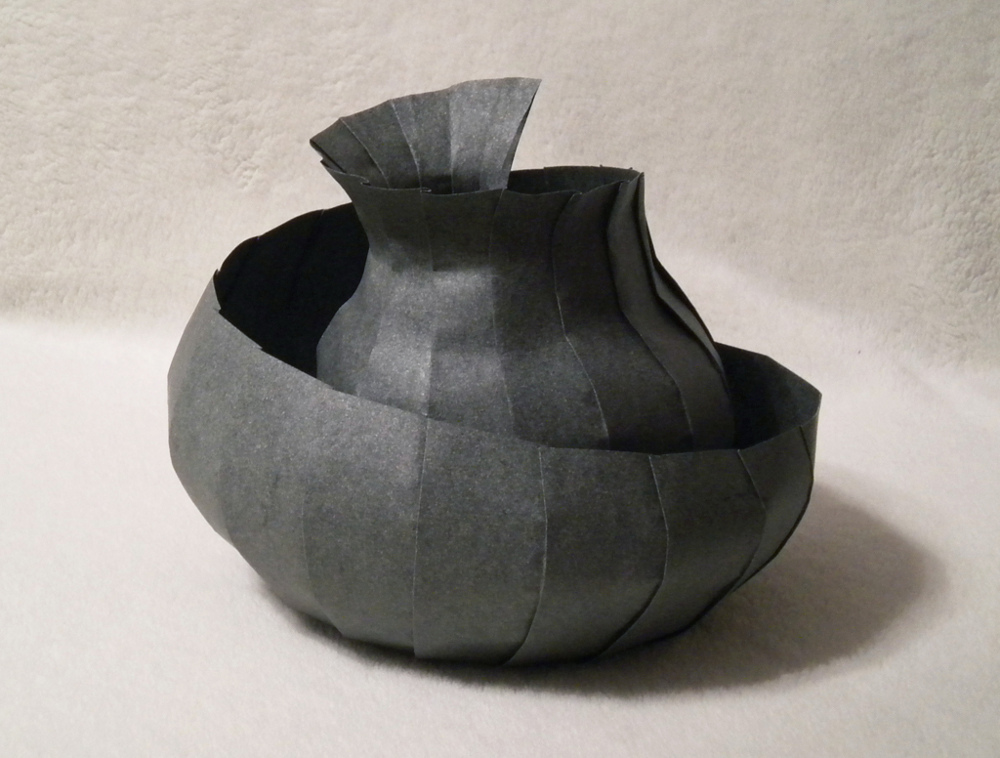 Spiral bowl
All pictures are by Rebecca Gieseking


What is your muse? What drives your creation process? Do you fold other people models? If so, do you have a favorite designer? a favorite artist? if you could go back in time, which art era will you choose? why?

Rebecca: Most of my inspiration comes from innovation, figuring out new folding techniques and ways of using them. I rarely fold other people's models, but a lot of my design work is built on the pleating techniques developed by many origamists, including Chris Palmer, Robert Lang, Philip Chapman-Bell, and Jun Mitani. I'm also inspired by many of the people working with corrugations and tessellations, including Eric Gjerde, Paul Jackson, Christine Edison, and many others.

A lot of my inspiration also comes from art history. Alexander Calder's mobiles have been a long-term inspiration, how he creates both physical and visual balance in a three-dimensional form. I've also drawn inspiration from Surrealist artwork, particularly René Magritte and his interplay between the realistic and the impossible. 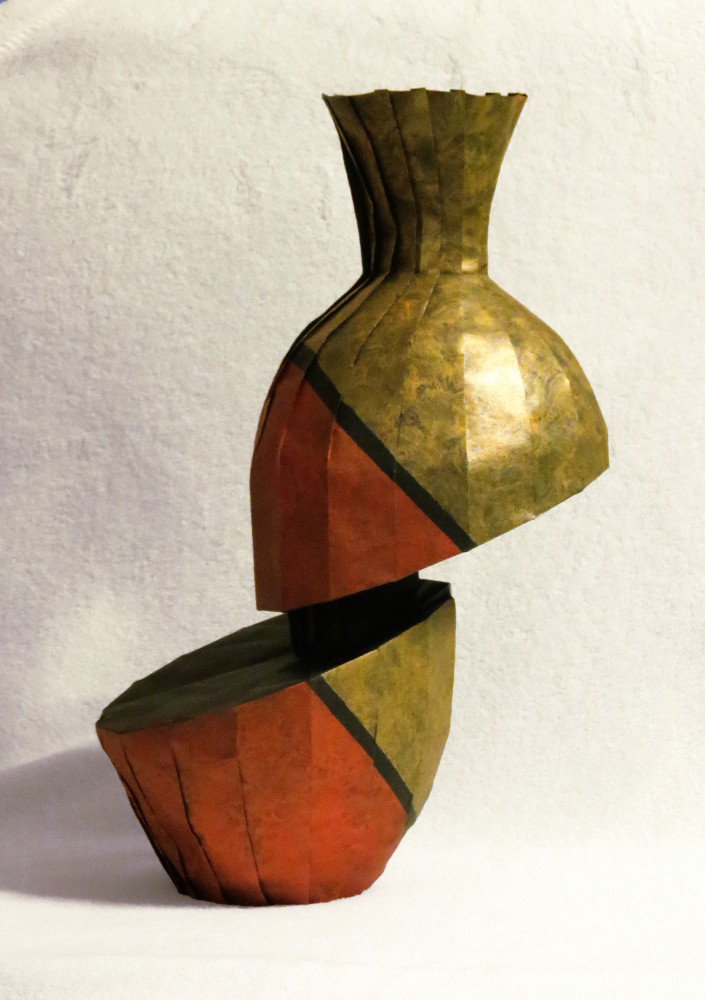 
I am always amazed to see how creative a person can be, even when s/he chooses a very narrow field of creation. It seems that you are very focused in what you do – can I call them mutated vases? Why did you choose that? Have you ever tried other areas to explore? What fascinate you so much by this theme?

Rebecca: I was drawn to pleated bowl and vase forms very quickly when I started designing origami in 2011, and I started adding geometric distortions to the forms within my first year of designing. I was drawn to this style because of the interplay between simplicity and complexity, and between creativity and logical engineering.

The basic design principles, even for the distorted vases, are much simpler than they may appear, and I can usually imagine how the crease pattern will fit together as soon as I come up with an idea for a new design. Getting the math right and actually folding the models is far more challenging. For many of the geometric distortions, an error of a millimeter can be enough to be noticeable on the final model. 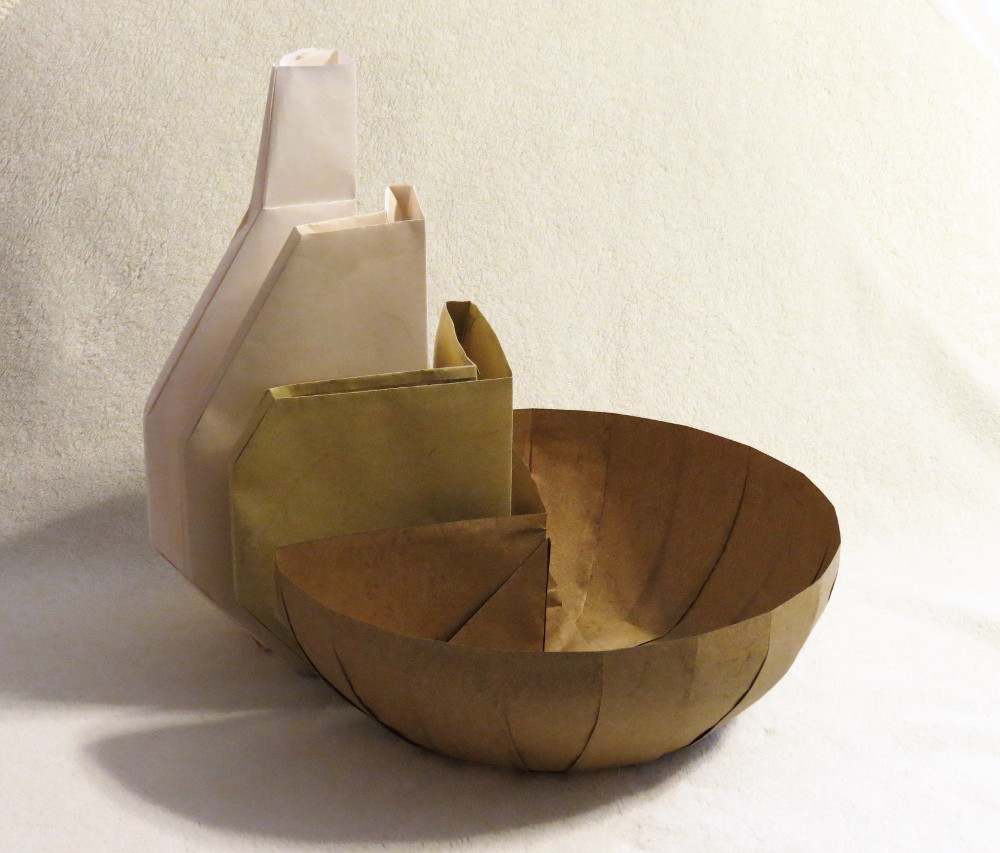 It seems that all you need to make it work is a PC and the right software, such as those Jun Mitani has created. But we know better; one must choose wisely one's final destination before one chooses the right parameters. Can you shed some light on your work process? What happens in your head before you turn on the computer, if you do use the computer as I think? Do you doodle with the paper first?

Rebecca: I generally go back and forth between phases of doing new engineering and phases of creating new models using the new units I've engineered. When I'm engineering new things, I'll tend to do a lot of test-folding to figure out what type of folding approach will work, and go back and forth between the folding and the math until I have something I can use in more complex models. I'm especially interested in figuring out conceptually simple ways of folding complex-looking shapes, even if the folding itself is quite challenging.

When I'm designing more complex models, I'm using units I've already engineered, so I know what the crease pattern will look like as I'm sketching. I do most of my design work on paper and only use a computer for a few things where the math is more complicated than I want to do by hand, like generating sine waves. For that I write my own scripts, using mostly Excel and Mathematica. Yet, I score the paper manually.

What papers do you usually use? Why? Do you prepare them yourself? How do you decide what paper to choose? Your work stands out not only for the folds, but also for the paint you use. Unlike with tessellations, when another pattern made by colors just confuses the eyes, your touch of color and paint just increases the beauty of the result. Can you say a few words about that? What colors do you use? Did you study art?

Rebecca: I almost exclusively use Elephant Hide paper, since it's heavy enough to hold its own weight but still fairly thin, tough enough to hold up to complicated folding, and wet-folds well. I've experimented a bit with other papers, but most only work for the simpler end of the models I like designing.

I paint the paper using watered-down acrylics. Currently I use Jo Sonja brand paints, but most brands that are at least at the high end of student grade should work. The painting is the first step once I have the model designed, and I measure out a lot of reference points and use masking tape to get clean edges. Once the paper is painted, I flip it over, measure reference points on the back, score the creases, pre-crease, collapse, and wet-fold. Since most of the painted designs can take 10 or more hours to fold, most of my designs only ever get folded once.

The colors work well in my designs because the designs have a simplicity about them, and the lines in the painted designs echo the folded edges. Sometimes the painted pattern visually reconnects the pieces I divided in the folded fold, and sometimes it repeats shapes similar to the geometric distortions. I studied art along with chemistry in college, and I'm very interested in approaching origami as an art form even if my tools and techniques are different from what other origamists use. 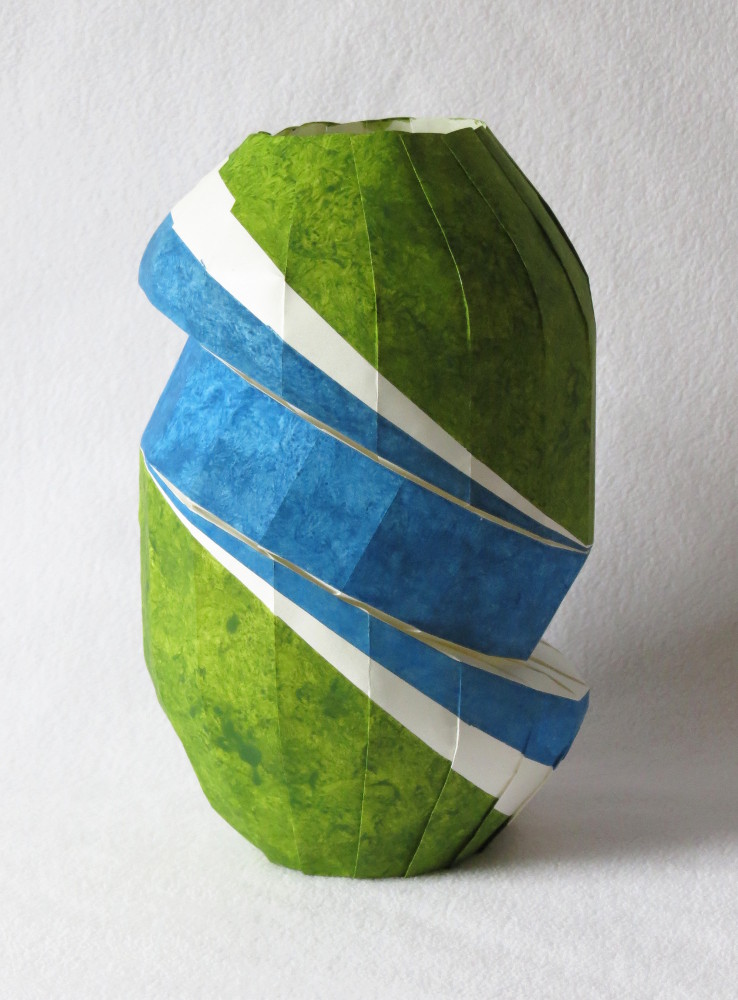 Rebecca: The main message in my work is the interplay of beauty and logic. As both a scientist and an artist, I appreciate the beauty of a sunset or a tree or many other things in my daily life but also think about the complex science and engineering that makes these things possible. I hope the people who see my origami will both notice its artistic qualities and think about the engineering of how it's folded, giving them a glimpse of how I see the world. 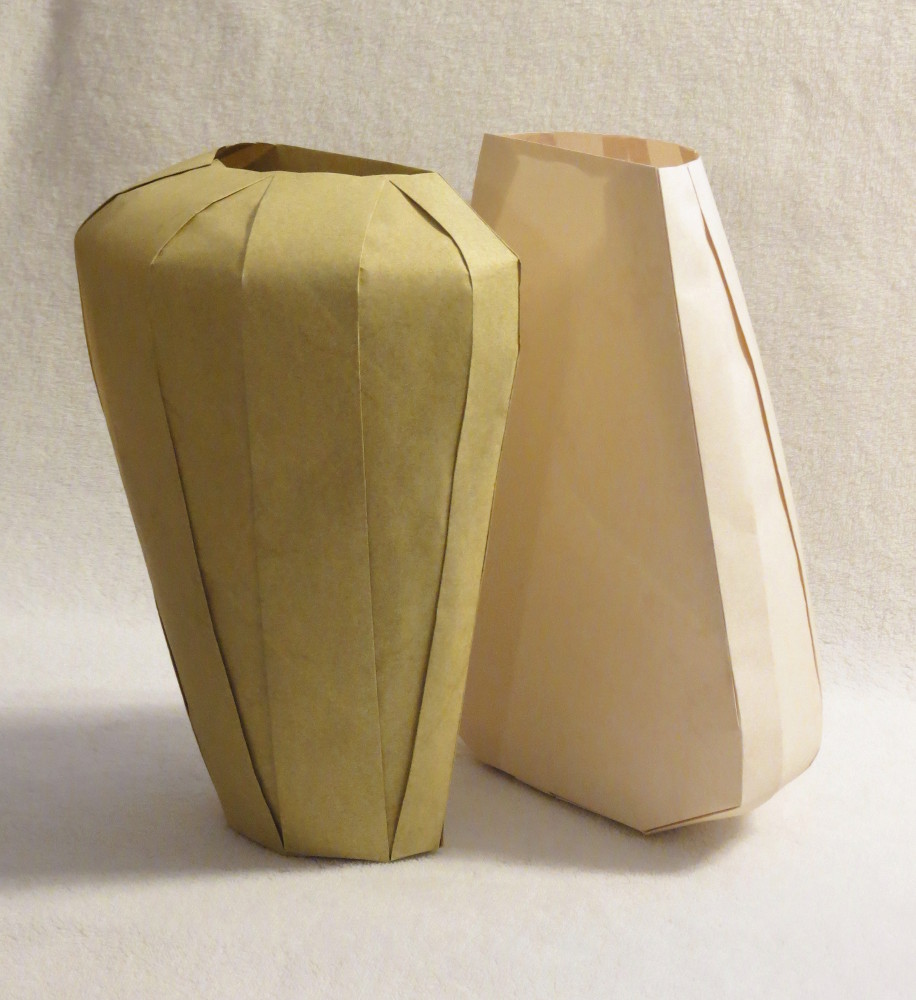 Rebecca: I chose my Uphill-downhill diagonal shift vase. When I first started trying to design the diagonal shifts in 2013, I originally wanted the shifts to go downhill, but uphill worked much more easily. It took me until 2016 to figure out the engineering to make the downhill shifts work, and this was one of my first models to use that.

Rebecca:What new shapes are you working on designing next? 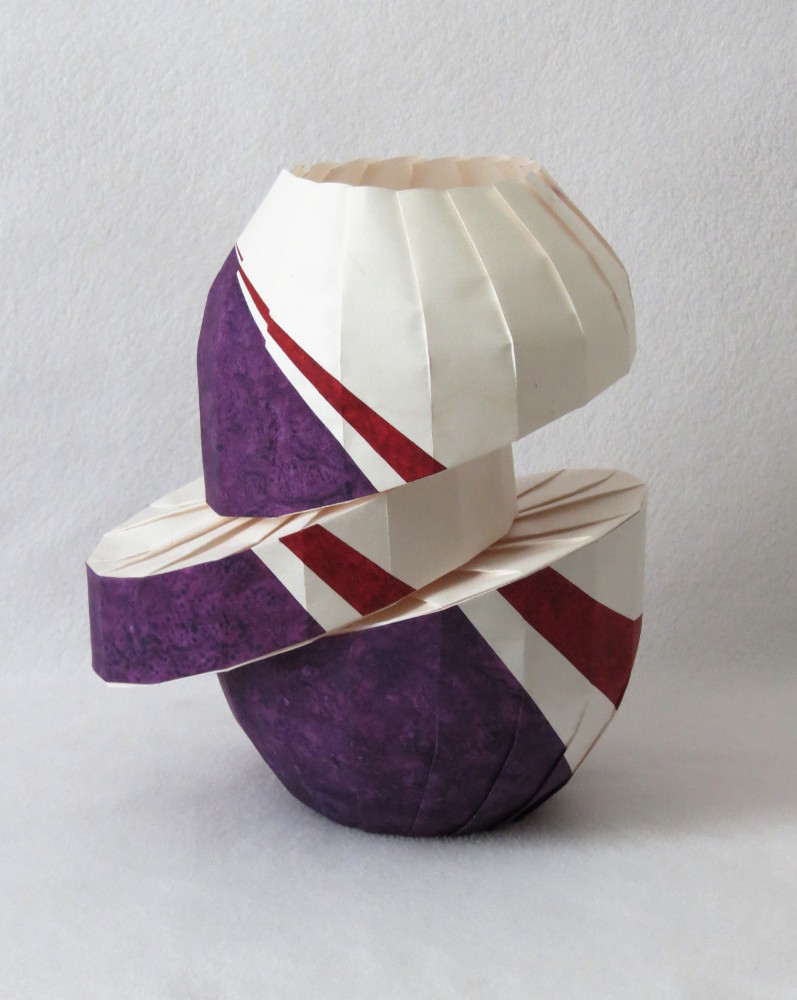 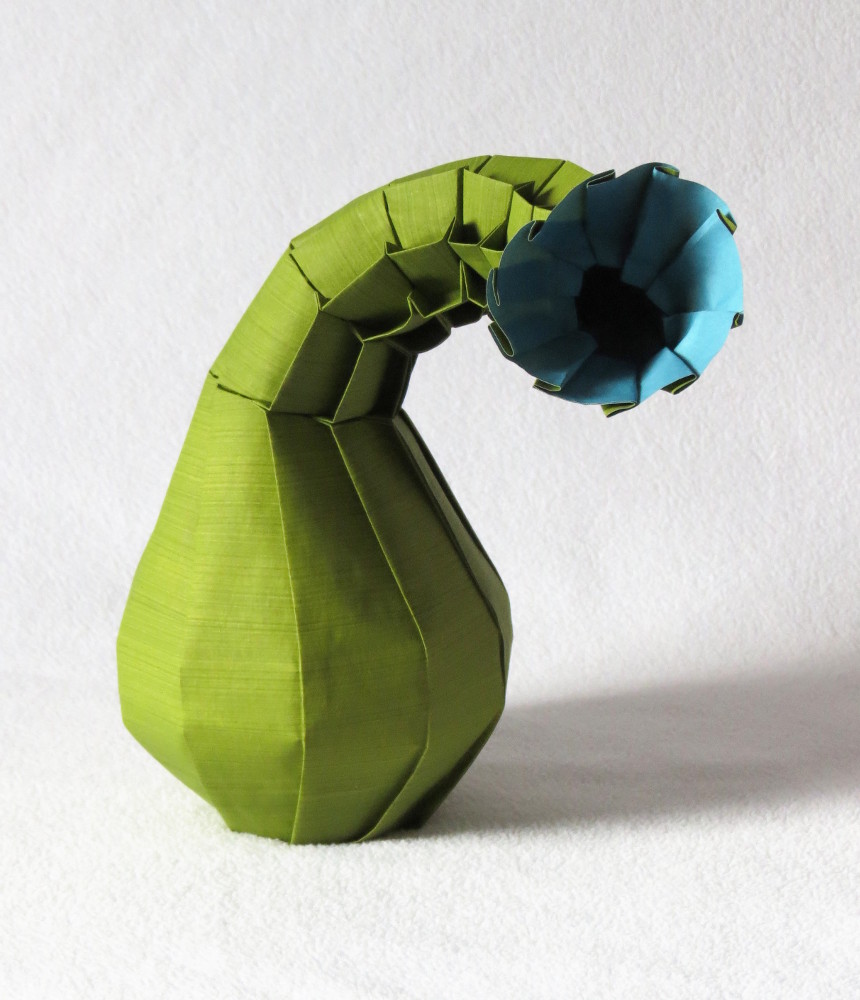 To really know a designer, you must fold her models. Here are the CP and instructions for the Ornament.