My introduction to Viviane Berty's work came through a photo and diagram of a cat on Flickr. Origami cats are notoriously hard to design, but Viviane's captured a cat's essence with a minimum of folds. Since then, we've published Viviane's striking designs several times in the OUSA Origami Collection, and I knew it was time to learn more about the person behind the folds.

Note: Readers receive a bonus with diagrams for two of Viviane's models, the cat and the elephant, both photographed below.

Q Who is Viviane Berty? Please tell us what we should know about you?

A As a left-hander, I would say that I am not in the right place most of the time because of my clumsy hands. But surprisingly, I discovered that with origami, I am good with my hands. I can convey exactly my own thoughts and feelings by folding paper. In the noble sense of the term, I am an amateur. For many people, origami is not art. It has no market value, it is nothing, just good enough for kids. For me, origami makes me feel unconcerned and totally free. As a musician, I love teamwork and dialogue. I feel lucky to belong to an origami group in my home city of Toulouse. My husband, Robert Loubet, is a paperfolder too. We attend many origami conventions together, and meeting so many people is inspirational and gives me joy and energy. I also owe a lot to the internet community, especially the forums and Flickr. 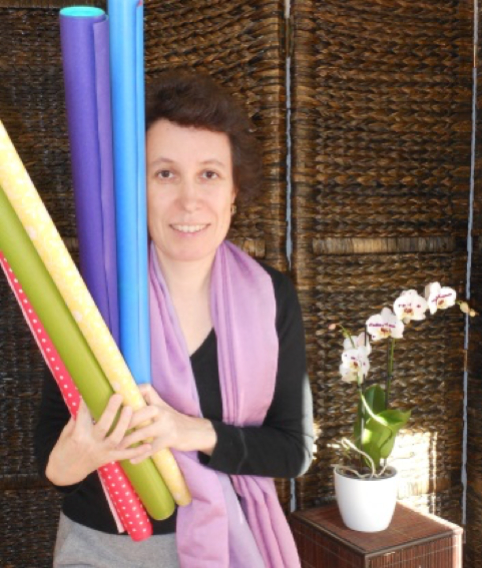 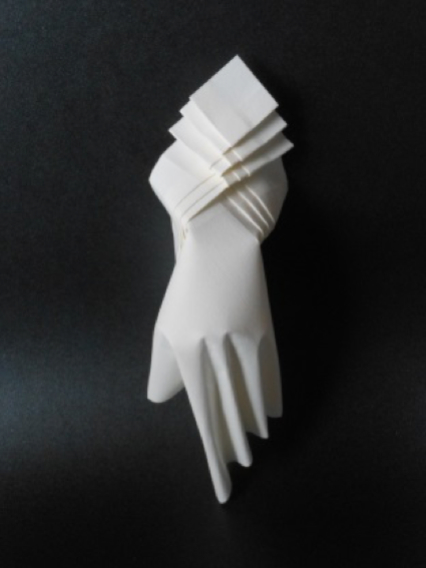 A In my opinion, origami is an art of the hands. Folding paper respects the body’s natural balance and rhythm. Your thoughts become profound and true when you respect your body and the paper. I don‘t remember the first model I folded, but I know exactly when: it was during a fantastic origami class that I attended, somewhat by chance, in June 1990. Our dear friend, Jean-Pierre Brunet, an astrophysicist who stumbled upon origami with the Miura-ori tessellation, organized the class and founded the Toulouse origami group in 1990.

I remember two important milestones in my self-taught origami studies. In 1995 I folded Robert Lang’s violinist from The Complete Book of Origami. I chose this model because I am an amateur violonist, and it reminded me of David Oïstrakh. I folded it rather quickly, with a good result, and at that very moment, I was convinced – and still remain convinced – that anything in the world or in your imagination can be folded with paper. Years later in 2011, I folded Takashi Hojyo’s violinist. It took me a long time to fold the box-pleated base with high accuracy, but ultimately I didn’t get a good result because of the fine shaping needed to achieve a beautiful appearance. While my fold was a failure (but not a tragedy, of course!) it did get me thinking.

Despite my disappointment, the pictures of the completed model had an undoubted appeal that I wanted to identify. For starters, I realized that the idea itself was beautiful: a violonist represented not by an austere man, but by a graceful lady with long hair and an evening dress. It eventually became obvious that the most important part of the model, the appealing detail, was this dress: a simple origami fan! I never forgot this dress. I consider that the secret of beauty (in my ideal criteria) comes from a simple yet surprising detail in a wide empty space. Finally, I met Giang Dinh in 2011, and Hoàng Tién Quyét in 2013, and learned the wet folding technique from them that was so helpful to produce sweet and clear shapes.

“Sitting cat (Feb. 2016). My first experience with Arches paper. The drawing of the diagrams was the object of discussion on the francophone forum. Three versions are available for download here.”


Origami kept me happy for many years, and I didn’t need to design my own models, except for a mother and child crane design from 1990. But in the autumn of 2012, I was preparing a display of rabbits, and I wanted some clovers to make a nice arrangement. I have lots of origami books, but strange to say, I could not find a clover diagram. And suddenly it occurred to me, I could see this very simple clover model so clearly in my mind, and I needed it, so why couldn’t I make it by myself? Since that moment, I’ve wanted to create again and again. My advice to every aspiring origami creator is to just try it! Whether your creation is small or substantial, the emotion is the same, I think. It is the inner journey that matters. It is to feel alive.

Q What drives your creative process? Do you fold other people's models? If so, do you have a favorite designer? What one origami book would you take with you to a desert island?

A I group my work into two categories: one is childish and funny, the other is focused on the beauty of clear shapes. I like to allow for unfolded surfaces in a model, to let the paper and its texture appear. Every single fold must be defined; no mistakes are allowed in the final result. I would consider it as either injury or negligence. The strength of a particular design must be seen, whereas the paper’s natural weakness must be invisible. 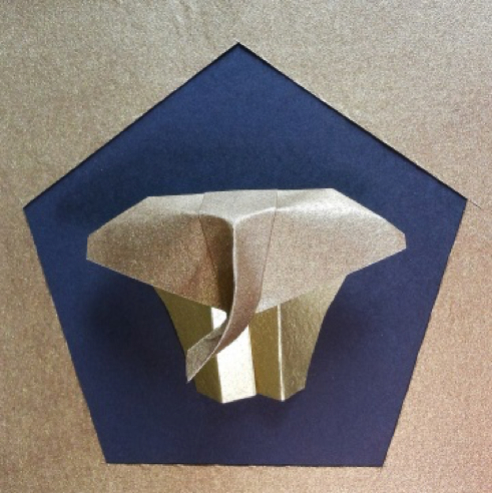 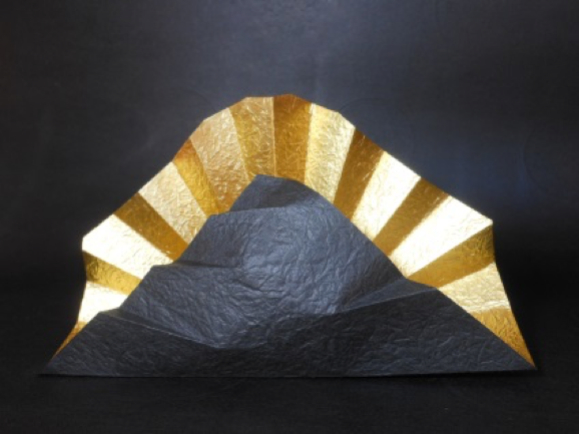 Left: Elephant from a pentagon: click on photo for diagrams;
Right: Rising sun over the mountain.

I don’t intend to create life-like things. I could be called a minimalistic figurative paperfolder. My muses are three painters: Pierre Soulages, who paints only with black paint; René Magritte, who painted only everyday objects but in wrong places; and Henri Matisse, who painted progressively simpler shapes throughout his life, culminating in his paper cut-outs. Another muse of mine is the Japanese writer Haruki Murakami. I love his aesthetic and emotional universe. I heard that he wrote first in English to simplify his expression and then translated back into Japanese. How smart! My desert island book is Origami Omnibus by Kunihiko Kasahara: Beautiful models, perfect diagrams, universal topics and inspiration. Timeless for sure!

Q Can you shed some light on your work process? Do you plan in advance, or doodle with the paper? Do you makes sketches first? How long is the process?

A First, I have an idea that comes from either meeting someone or from doodling with paper. When the idea is clearly identified, I don’t search for images or photos. I just try to see what image is conjured in my mind when I say the idea out loud. For example, if I’m folding a dog, then my image is probably a synthesis of all the dogs I have seen in my life. 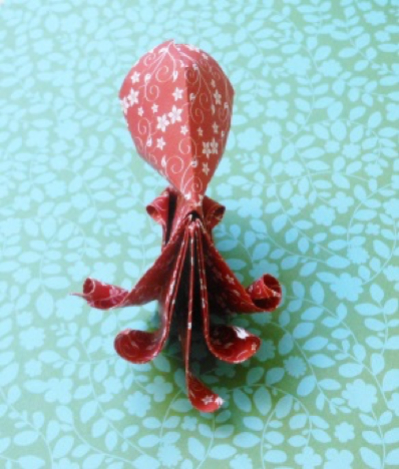 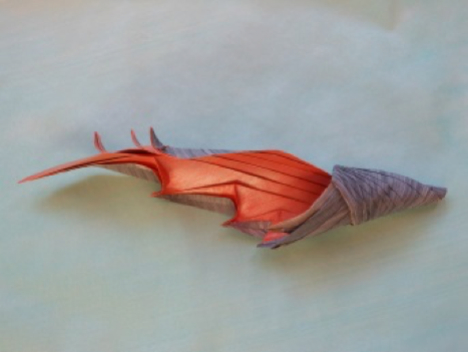 Left: Inexact octopus with only five tentacles, but it is identifiable;
Right: Imaginary shell.

I then look for a detail that makes me love the image and a basic shape or base close to the image I have in my mind. When I have chosen this base, I begin to fold, with a sequence as quick and direct as possible, with rough paper. I try to find something beautiful. I don’t try to be true to life; I am looking for another truth. I am very demanding and critical. When the first version is completed (with good paper), I need to show it. Designing "simple" models is a far greater risk than you might believe. I carefully observe my beloved ones’ reactions. And I wait a few days to become clear-headed in my own reaction to my model. Then I upload a picture to Flickr and the French forum and teach the model to check if everything is understandable. And finally I draw the diagrams. Drawing the diagrams leads me to a new step in the creation of the model. I have to make the diagrams perfect. I owe so much to my friends who testfold them, especially my beloved husband Robert who reads every page of my diagrams. I also appreciate the helpful comments of Jean-Michel Lucas, who tested my earliest models. He is a talended paperfolder, with huge technical knowledge, and helped me to become self-confident. And the person who devotes the most time to my diagrams by far is Amandine Guerra, who is so accurate and so generous. Many thanks to my testfolder friends!

Q What papers do you usually use? Why? Do you prepare them yourself? How do you decide what paper to choose? Do you try to match the paper to the topic of the work?

A I have no favorite paper. I try many different types for a model. Sometimes I paint with acrylics, paper Sketch 90g. The most important quality of the paper is that the folding remains easy. For « ideal shapes » I use Arches paper. For « childish and funny » I use decorated papers, with joyful and heterogeneous colors. Sometimes the paper itself (color, pattern, texture) gives me an idea for a model, such as a shell. 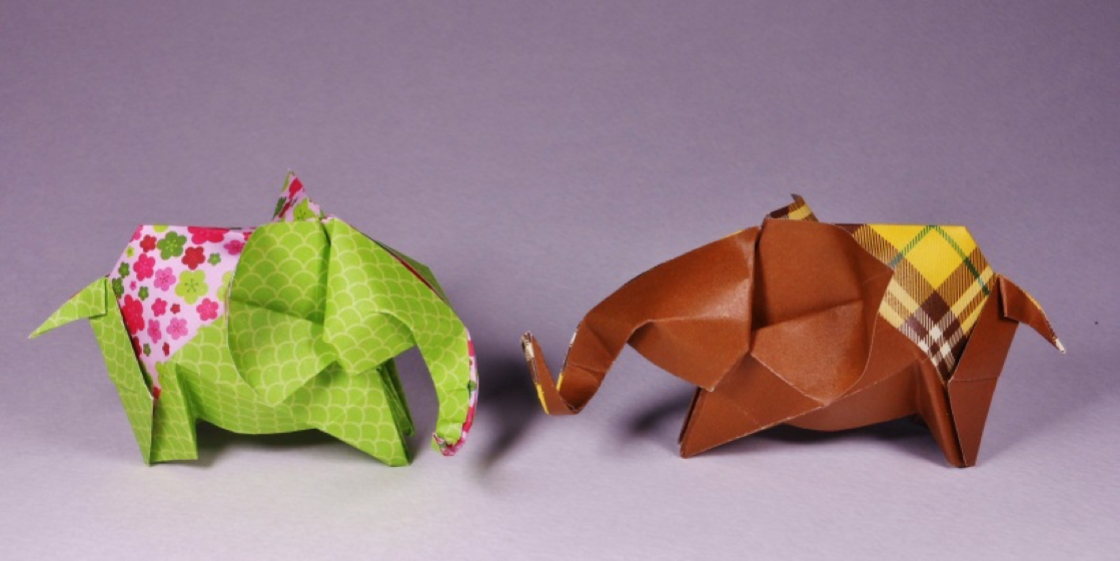 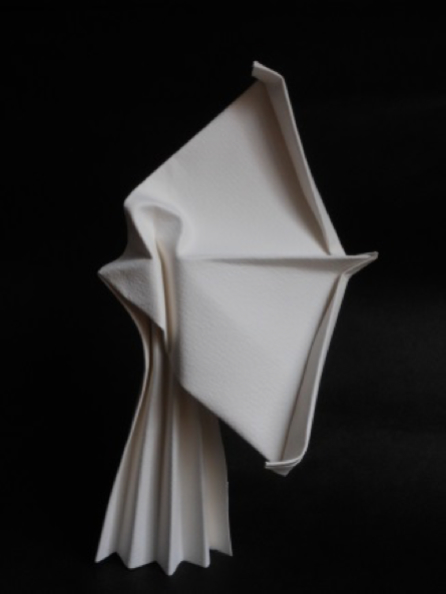 Q What about diagrams?

A The reason why origami is not paper sculpture is because there exists a folding sequence. The folding process is part of the artwork, and the way to show it is through diagrams. I consider diagrams to be the strength of each model. It is its survival, because it contains the idea. I prefer the pleasure of making hand-drawn drawings. Initially, I was not a draftswoman. I only began drawing to create origami diagrams. Of course, digitalization is compulsory: this is the frustrating and unreliable part!

It is not possible to show every detail for all the models, My goal is to allow anybody to reproduce a model, and I achieve that with some of my designs. For example I, too, have to pratice a little before folding the model Femme d’Autrefois. There is no reference point, because many good results are possible (and many bad results of course!) For the 2015 International Origami Internet Olympiad, I sent Andrey Ermakov a photo diagram of my Daisy, and he made high-quality computer-generated diagrams. It is not a difficult model until step 24. After folding a box, you have to turn it into a circle, with a delicate gesture sliding the layers together while keeping pressure on the center. The question is: should origami diagrams contain gesture information? Most of the time, you cannot draw such information, you have to write about it. And it makes the diagrams difficult to interpret. Good diagrams allow you to fold fluently without getting stymied. During the Olympiad it was so thrilling for me to see so many versions of my Daisy based on folders’ interpretations of step 24. Afterwards, I uploaded my photo diagrams, because some paperfolders (kindly) complained about step 24! 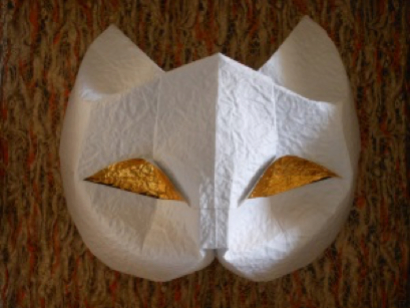 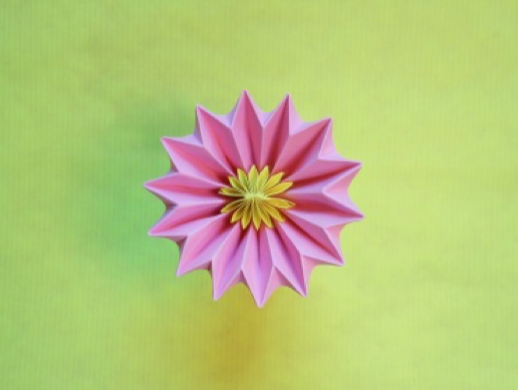 Q Do you have a motto in your life? Is origami part of that motto?

A Carpe diem! Origami is ephemeral, and fragile, like life.

Q If you could pick just one model of yours to represent your work, which one would it be, and why did you chose it?

A Would you allow me to pick two? For childish and funny: Nounours. It was wonderful teamwork with Francesco Mancini, Michel Grand, and my husband Robert. Moreover, many paperfolders suggested new ideas. For ideal shape: Femme d’Autrefois and variations. It was designed especially for the Mujeres de Papel exhibition at EMOZ museum in Zaragoza from December 2016 to March 2017. 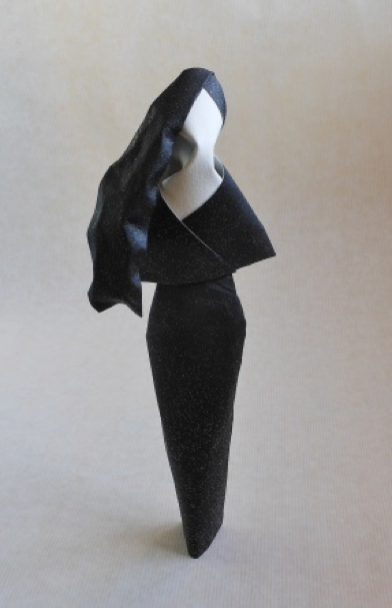 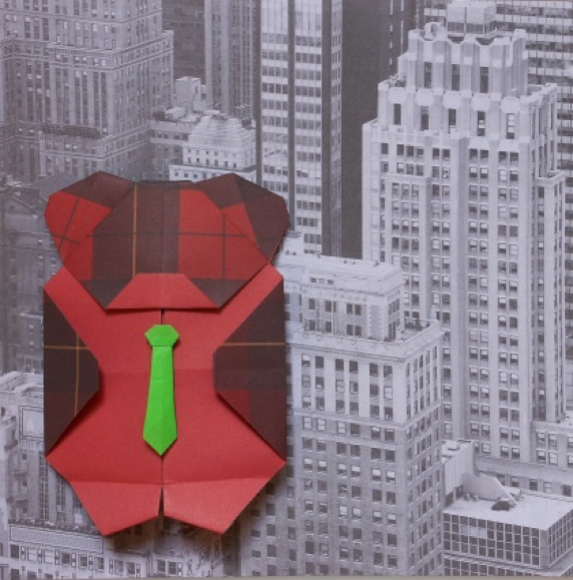 Q Is there one last question I should have asked?

A How can paperfolders get in touch with other artists? Can origami live outside of the origami world?