Origami, The Gift of Delight

When Lillian Oppenheimer founded The Origami Center of America in 1958, she did not run it like a profit-making business or a sensei (master teacher)/pupil relationship. What she had in mind was a way to connect with other folders to share origami models and friendship. Her approach set the tone for all of the origami societies around the world that followed her lead.

Tom Kruskal is one of Lillian Oppenheimer’s many grandchildren. When he was around kindergarten age, Lillian taught him how to make an origami paper cup. The next time he saw Lillian, he told her that he had made 40 paper cups—one for each child in his class. Lillian explained to me that this act is what gave her the idea that “origami is for sharing.”

There currently is no official OrigamiUSA award in honor of Lillian Oppenheimer, hopefully there may be one in the future—until then, to honor Lillian, and the generous way in which she promoted origami, I would like to give out my own personal Lillian Oppenheimer—Origami is for Sharing Award, to someone who exemplifies this spirit in spades—Linda Bogan.

Linda has been folding for almost 30 years and has been sharing its joys for all of those years. I am familiar with her excellent teaching through our mutual attendance at OrigamiUSA meetings, Lillian Oppenheimer’s Folding Group, the New York City Origami Meetup meetings, and Fold and Feeds in New Jersey and Pennsylvania.

Recently she was invited to teach at OrigamiUSA’s Special Sessions, and it was there that I saw what it was like to experience a full-scale class with Linda: The thoughtful planning of what to teach, the preparation of folders’ kits, and exceptional teaching skills and joyful presentation, as she wanted to make sure everyone left with a smile on their face.

For Linda a model should meet one or more of these criteria:

✔Can you give it as a gift?

✔Can you teach it to beginners?

During all the years Linda worked as an elementary school teaching assistant, she shared origami with her students and fellow teachers. The kids could come to her at lunchtime for an origami lesson. At any teacher function, be at a baby or wedding shower, or a retirement party, Linda stayed up all night making creative centerpieces for the event and composed amazing origami collage scenes depicting all of the guest of honor’s favorite activities and hobbies. 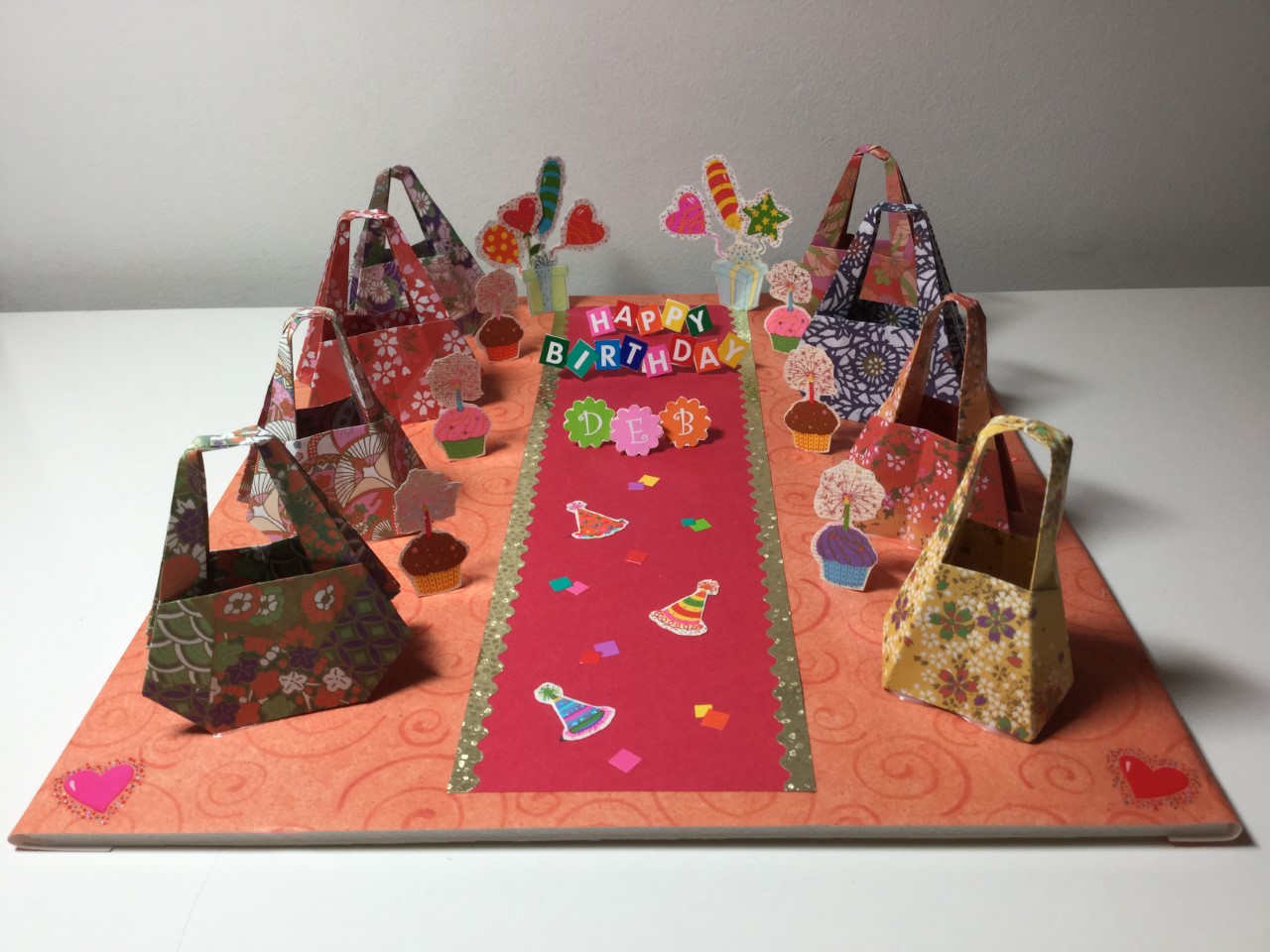 The secretary at the school where Linda worked, loved pocketbooks. For her birthday, Linda made her a Parade of Pocketbooks lined up along the Red Carpet!

No doctor or their staff ever received a visit from Linda without being given an origami gift or home-baked treats—very often the two were combined—such as Linda-baked goods in clever origami containers.

Linda’s creativity and sharing spirit inspired her son, Daniel Bogan, to make this centerpiece when the principal of the school where he worked, retired to Florida. 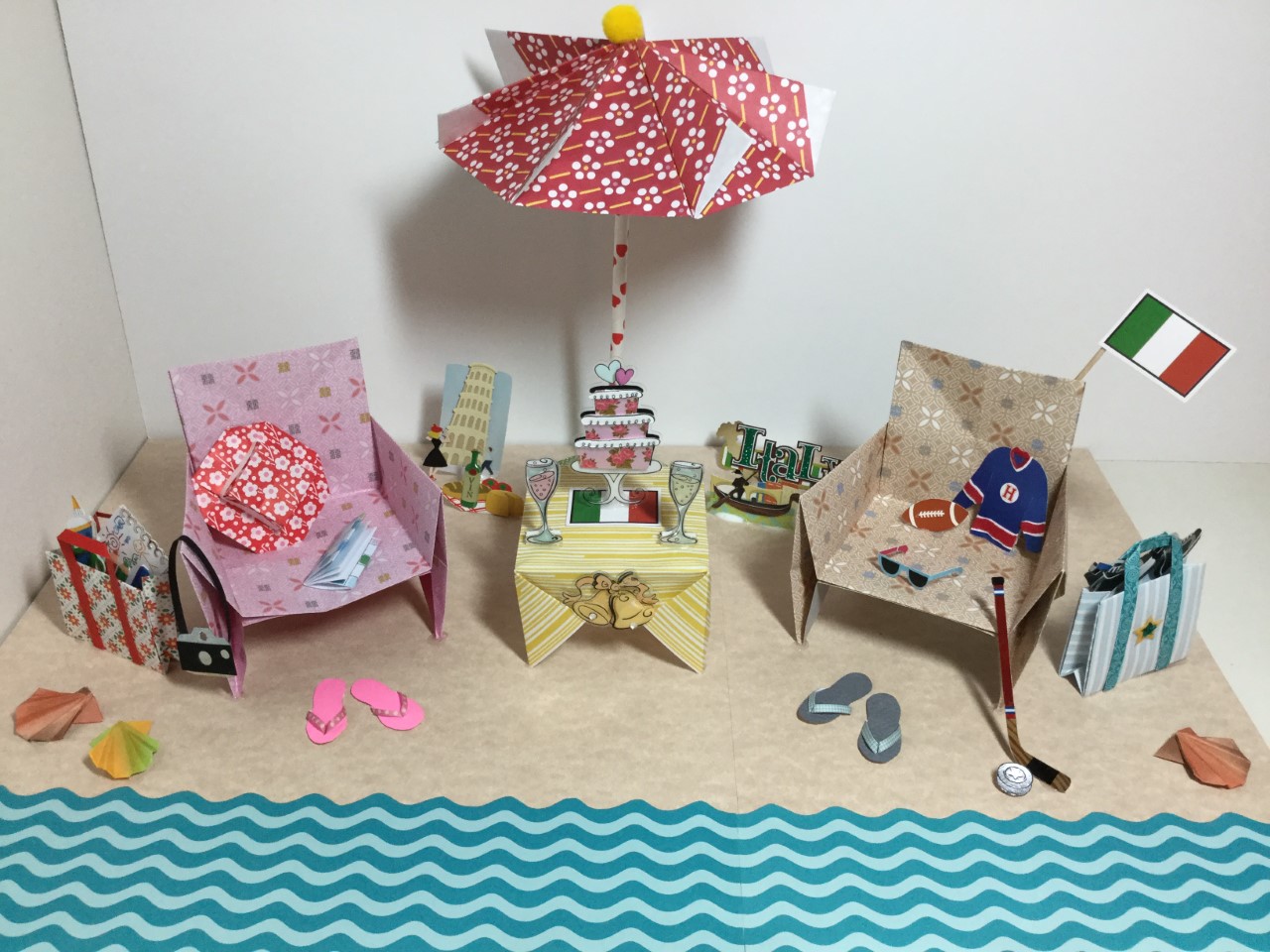 Centerpiece created by Daniel Bogan in honor of the principal's retirement.

As Linda has been dealing with debilitating side effects of chemotherapy, she has been sharing origami with fellow cancer patients at a local hospital, forgoing her own pain, in hopes of bringing some cheer to others.

Several years ago, I decided that my own personal definition of origami is more than “the art of paperfolding,” but also, “the gift of delight.” Linda Bogan truly exemplifies this as well as the spirit of bringing joy to others through the sharing of origami.

9 July 2019––Sadly, this tribute to Linda Bogan is now an “in memoriam.” Linda passed away this morning, a day after this article was published. She and her family did get to read it and see in print how much she was admired and appreciated.